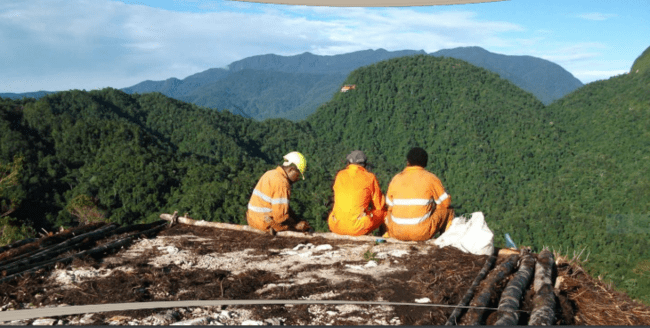 When one thinks of Papua New Guinea, one might evoke images of deep impenetrable jungles, wild-eyed Crazy’s that want your head on a stick, and big-ass bugs that can kill your ass.

The fact is, Papua New Guinea is one of the most diverse countries on the planet, boasting over 850 different languages and roughly 1000 distinct cultures. 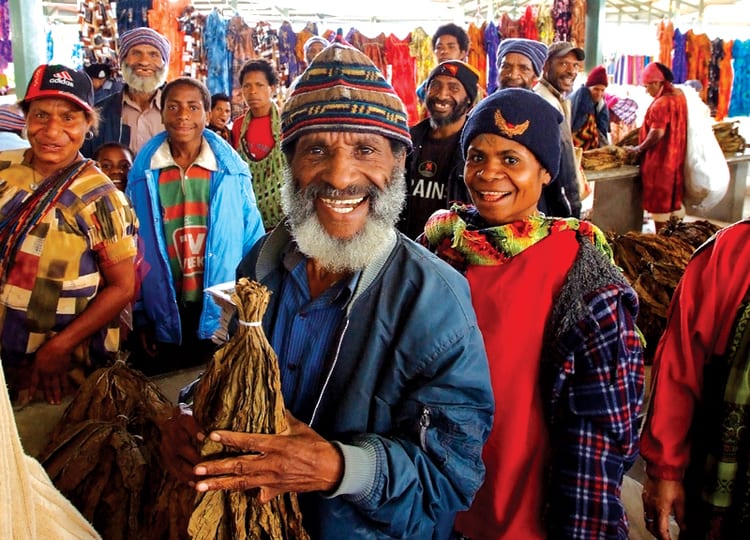 My mom would’ve appreciated this: Papuans were the world’s first agriculturalists.

Archaeologists discovered evidence of gardening that goes back 9,000 years.

The Country’s 460,000-plus square kilometers encompass over 600 small islands, including a portion of the island of New Guinea that shares a common border with Indonesia.

I’m a big believer that we, as a species, have tapped out much of our planet’s mineral wealth. Certainly, the lowest hanging fruit is gone. I believe we’ve reached peak gold—a peak in discovery and production.

Industry magnate Ian Telfer on the subject, two years back…

To further our quest for Tier-1 mineral deposits—large, long-life, robust orebodies—we need to scour territories we seldom dare tread, where the facilities of modern life do not exist.

Papua New Guinea is one of the least explored countries on the planet.

Freeport is setting its sights on a potentially large copper/gold porphyry project—its Star Mountains Project—in what is becoming an increasingly mining-friendly jurisdiction—Papua New Guinea, or PNG for short.

This region of the island nation merits the handle, Elephant Country.

Star Mountains is located in the highly prospective PNG Orogenic Belt, only 25 kilometers from the colossal Ok Tedi Mine, and in the same geological arc as Grasberg, Frieda River, Porgera & Ramu. 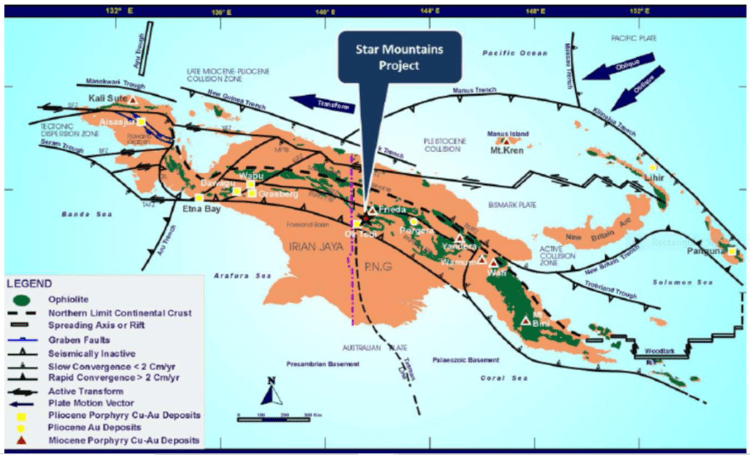 On the subject of Grasberg, this deposit, operated by Freeport-McMoRan, has over 67 million ounces in gold reserves. I believe this ounce-count, spread out across three operating mines—the Grasberg open pit, the Deep Ore Zone underground mine, and the Big Gossan underground mine—represents the largest Au resource on the planet.

On the subject of OK Tedi, a similar PNG-based copper-gold porphyry located only kilometers away, the following is worth noting…

Getting back to Star Mountains

More than $50 million has been spent on the project since the initial discovery back in the early 1970s.

$30-plus million of that total was spent over the past six years, during a brutal bear market in all things metals and mining.

The Star Mountains acquisition was well-timed as it appears we have broken the downtrend and may be on the cusp of a bull cycle that could rival the run witnessed between 2001 and 2011.

The project and resource

“The geology of the Star Mountains is characterised by generally shallow dipping Mesozoic and Cainozoic continental margin marine sediments, which have been forcefully intruded by middle Miocene to Pleistocene stocks, with coeval volcanism, and rest on a Palaeozoic metamorphics-granite basement exposed to the south. Deformation is principally expressed as large scale thrusting which was contemporaneous with intrusion of the calc-alkaline stocks and associated volcanism.”

The project has been subjected to extensive mapping, geochemical sampling, geophysics, and drilling.

Additional work on these prospects included: 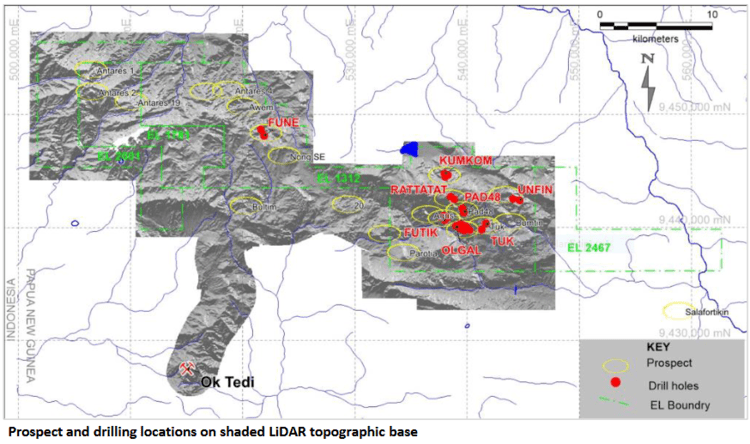 Of the five prospects drilled, the Olgal target produced some of the fattest intervals:

These fat hits helped lay the foundation for a maiden Olgal Inferred resource estimate of some 210 million tonnes grading 0.4% Cu and 0.4 g/t Au.

Using current metals prices, this resource is equivalent to 5.9 million ounces of gold OR 3.7 billion lbs of copper.

This resource estimate is based on 23 diamond drill holes (8,949 meters drilled) with a nominal spacing of 200 meters between holes. 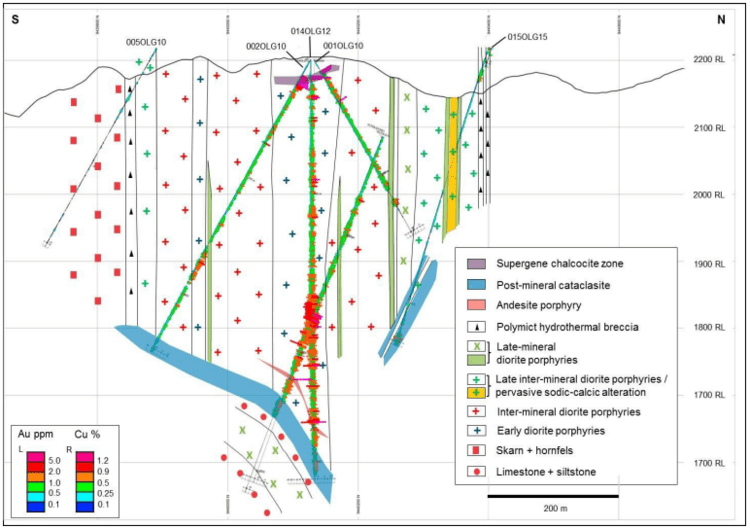 I know what you’re thinking, “How many meters of additional drilling will be required to increase the confidence in this resource, elevating it to the Measured and Indicated categories?” Great question!

According to Freeport’s technical team, it will likely require an additional 23 holes—another 9,000 meters of drilling—to satisfy the spatial requirements for a push into these higher confidence (Indicated and/or Measured) categories.

“What kind of costs are we looking at for a 9k meter drilling campaign?” Another great question!

Based on this team’s experience operating in PNG, the drilling-only costs for a helicopter supported 2-rig program will ring in at roughly AUD$200 per meter, excluding all support, facilities, and personnel costs.

This will work out to approx US$1.35 million for a 9k meter, 23 hole campaign (plus support, facility, and personnel costs).

The resource expansion and exploration upside

Being a Cu-Au porphyry, within 501 square kilometers of largely untested PNG Orogenic Belt, the resource expansion and exploration upside at Star Mountains has to be considered very good. 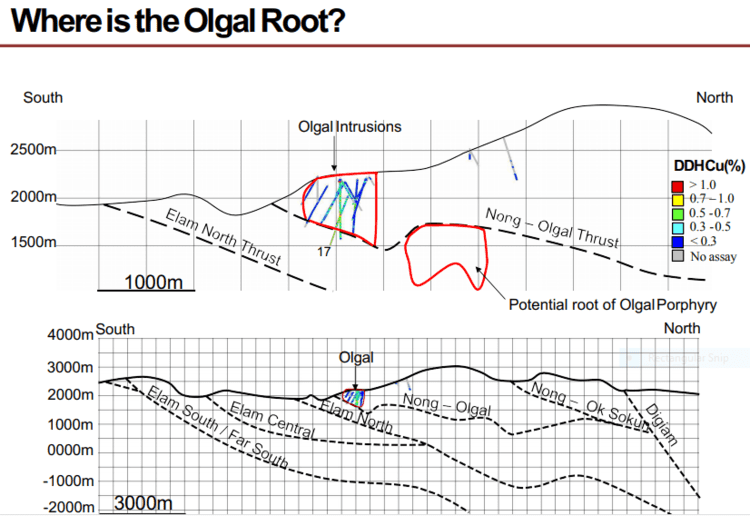 Beyond the borders of the Olgal prospect, of the multiple targets representing potential exploration upside, Kum Kum and Fune stand as two of Freeport’s more advanced targets.

Kum Kum is a skarn prospect

Drilling back in 2013 tagged the following intercepts:

Fune is also a skarn prospect

A 2017 drilling campaign at Fune tagged the following values:

The Company could probably spend years, if not decades, probing Star Mountains subsurface layers, and still not realize its ultimate potential. 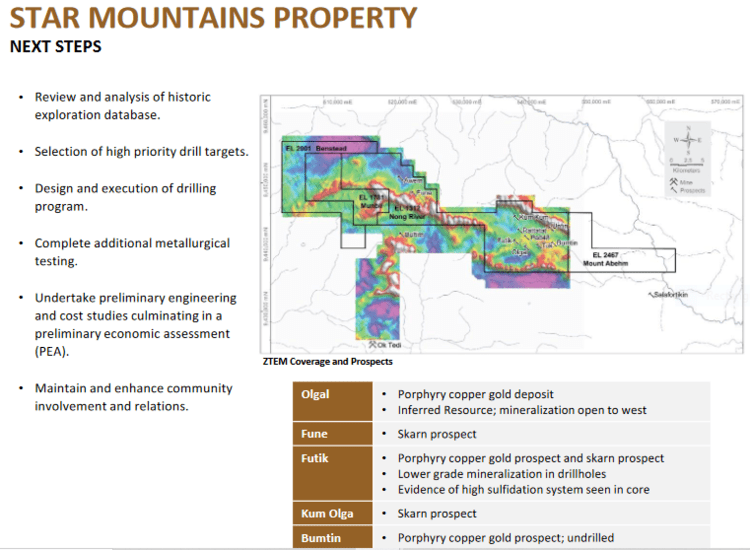 Regarding metallurgy—an all too important consideration with any potential development project— the best reference we have is the OK Tedi mine. OK Tedi is currently in operation using gravity separation and flotation. Recoveries, based on recent reports, are approximately 86% for copper and 59% for gold.

Though surrounded by dense jungle, the project enjoys close proximity to a 30 person exploration camp and airstrip.

Services at nearby Tilfalmin include a police station, hospital, administrative offices, and a number of schools and learning facilities.

The mining community of Tabubil is located roughly 30 kilometers away. Tabubil is a well-serviced town with all of the modern conveniences one might want. 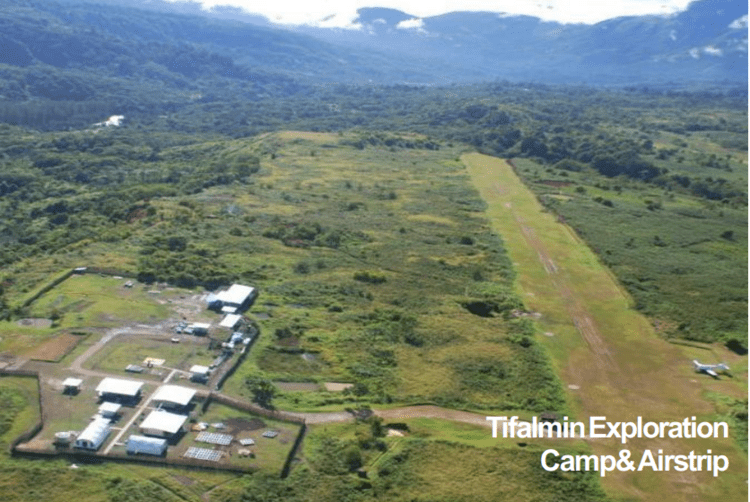 Though the Star Mountains project area is sparsely populated, with people living mostly in small villages, the Company enjoys excellent relations with these local communities.

Since 2010, the push to explore the region has been a major source of employment for many of the villagers living nearby. 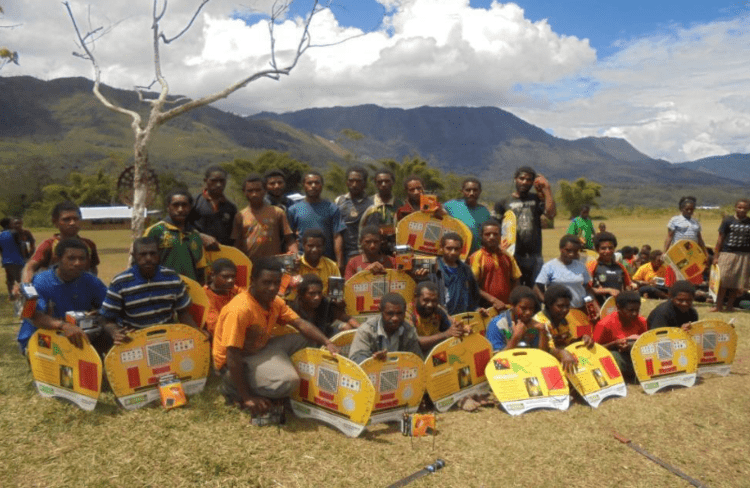 Looking a Freeport management, it’s an experienced crew with an advisory board consisting of several key names with extensive experience in PNG. This is what I was hoping to find when I first looked at the Company—a couple of key in-country hires.

Libas Ulaiwi has over 25 years of work experience in the Mining Industry. I am currently doing geological consultancy work for Highlands Pacific and recently Anglo American as an Independent Consultant. Up until November 2017, Libas was working as the Principal Project Geologist, managing and supervising the site operations of the Highlands Pacific Limited–Anglo American Star Mountains Project in Papua New Guinea. Prior to this appointment Libas was a senior geologist with Ord River Resources, based in Sydney and managing exploration work on copper projects in Western Australia and gold projects in Northern Territory and New South Wales. Libas graduated with a Bachelor of Science Degree, majoring in Geology at University of PNG in 1994 and completed Masters of Economic Geology at University of Tasmania.

Ron Gawi spent 33 years as a public servant commencing in 1978 as a Technical Officer at the Geological Survey of Papua New Guinea. He was then a Project Coordinator and then followed that appointment with senior management roles first in the Department of Mining and Petroleum and then in the Mineral Resources Authority. During this time, Ron also studied and obtained a Certificate in Earth Sciences at the University of the South Pacific, Fiji in 1989. In 2011 Ron left the Government and joined the private sector with Highlands Pacific Limited, which is a diversified mineral resources company registered in PNG and, at the time, was listed dually on the Port Moresby Stock Exchange and Australian Stock Exchange. Ron is currently a full Council Member of the Chamber of Mines and Petroleum and advises several companies in the PNG mining industry on a consultancy basis.

The last headline the Company put out announced the completion of the Star Mountains acquisition deal.

This project, particularly the Olgal prospect hosting the current 5.9M AuEq resource, is primed for a proper poke with the drill bit. The mobilization of a drill rig to Star Mountains, perhaps as early as Q1 of 2021, should mark the beginning of a substantial period of newsflow.