If you’ve ever watched the litany of gold mining programs on cable TV’s reality TV channels, you’ve seen folks jumping up and down like they have a weasel in their pants whenever they hit enough gold to cast a teenager’s valentine pendant.

“OMG IT’S A BEAUTY!” will cry some rough around the edges Australian with enough sun damage on his face to qualify as a Mad Max extra.

In the upper levels of mining exploration, nobody jumps up and down when they see dust in a pan. At the upside, you want metres of shiny to justify going in with big excavators and drills.

Brigadier Gold (BRG.V) just knocked up against what could be a 5 metre wide, 170 metres deep vein with a drill program designed to see exactly how far the thing might travel.

Early indications are, there’s some ‘there’ there.

The first three diamond drill holes of a 5,000-metre, 40-hole program at Brigadier Gold Ltd.’s Picachos property have intersected the San Agustin vein up to 125 metres below the historic Nuevo Carrito adit. Core from holes BRG-001 and 002 has been received by SGS Labs in Durango and core from BRG-003 will be picked up by SGS this week. Assays will be made public upon completion of the analytical work.

What did they find? 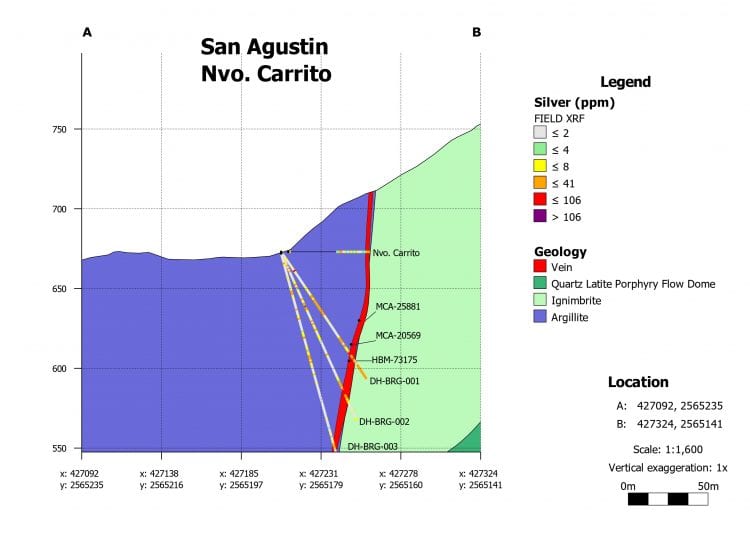 The image above shows the location of three drill holes Brigadier has made (BRG-001, 002, and 003) below historical drill holes from previous owners. Brigadier chose to go deeper than the old boys, and found enough juice to indicate the vein in question heads down a good depth, with a decent amount of ore involved along the way.

The vein, as you can see from the colour coding in the chart above, shows significant silver, which often indicates the presence of gold ore nearby, and the lower holes show a hefty chunk of quartz carbonate, which is where gold often lies. Further lab results will give specifics but, as an early indicator, this is nice.

From the cross-section presented [above], it appears that BRG-001 cut through underground workings just above HBM-73175 and about 10 metres below historical sample line MCA-20569 which sample line returned XRF values of 94 ppm silver, 0.3% copper, 0.4% lead and 2% zinc across 1.6 metres.

When drilling to determine the likely depth of a vein, explorers angle their drills along it at intervals and measure what sort of ore, if any, they hit along the way. A consistent strike like the kind seen in the image above is a really good sign as it suggests a long string of ore, rather than clumps of shiny rock here and there.

BRG-002 is collared at the same location as BRG-001 and is angled -66 degrees under BRG-001. BRG-002 intercepted quartz-carbonate veining between 93 and 103 metres down hole, approximately 25 metres down-dip of BRG-001 and is believed to be well-under all of the underground workings. Similarly, BRG-003 is drilled under BRG-002 at a dip of -75 degrees. BRG-003 intercepted quartz-carbonate veining between 123 and 130 metres down-hole, approximately 40 metres down-dip of the intercept of BRG-002

There’s thousands of metres of drilling to be done before the Brigadier program is completed, but this first sampling is solid business and shows historic miners may have left a lot behind when they departed.

“Michelle Robinson and her team on the ground at Picachos have delivered promising early results indicating that the vein which hosts the historic high grade San Agustin gold mine may be of material width and vertical continuity. The projects first ever diamond core drill program is playing a substantial role in assisting the Company to better understand the geology and structure of the four vein systems we are targeting, while uncovering important details previously unknown to historical operators.”

BRG hit paydirt of a different kind earlier in the year, when it came out of the gates as a public company with a big run from $0.10 to $0.62 in a week or so. Obvious profit taking dampened that some, but recent news and an increased focus on the sector by those looking for a safe haven for their cash have seen it moving up once more, from $0.22 to $0.30 in a few weeks, at the time of writing. Trading volume is increasing, and the company will expect more news to emerge over the coming weeks as that drill program heads to the lab and brings real results.