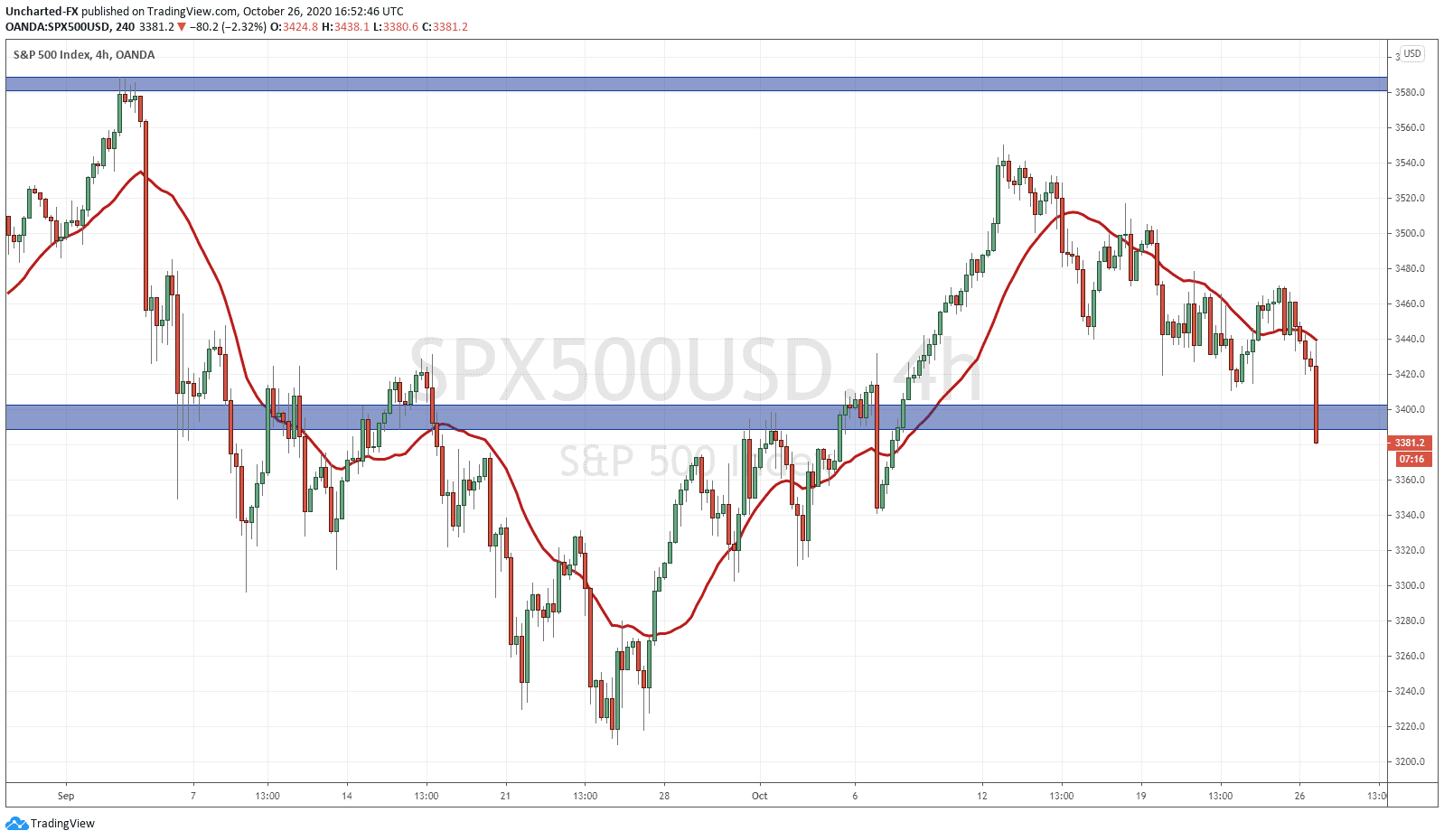 If there is one thing that stock markets hate, it is uncertainty. And do we have a lot of that to go around this week. This is the last full trading week before the US Presidential election, and many have been pricing in a Biden victory, and a subsequent “Blue Wave”. Now, we could be seeing evidence that the market is not pricing this in anymore.

Markets were initially holding our support zones, but are now BUTTERING below these zones. The Dow actually closed and broke below its support during overnight trading…was a sign of things to come. At time of writing, the buttering looks ready to accelerate, as the 4 hour candle closes are due in just 5 minutes!

Many are attributing this fall to another piece of uncertainty. Over the weekend, President Trump’s chief of staff Mark Meadows said that “we are not going to control the pandemic”. That the US will not be able to control its spread, but are going to control the other aspects such as vaccines, therapeutics and mitigation areas. Again, not something the market really wants to hear.

I believe this sell off has more to do with the Presidential Election, which is a high risk event, and will obviously impact the stock markets. Stock markets have been pricing in a Biden victory. How do we know this? It is not necessarily the polls. As we have seen in years before, with elections all over the world, polls get it wrong. It is markets rising as they factor in MORE cheap money. Democrats mean more spending, which means more cheap money, thus cementing the idea of stock markets being the ONLY place to go for real yield.

I have said in previous posts that regardless of who wins, cheap money is the commonality. But the Democrats will be the bigger spenders. With markets dropping, they seem to be pricing in the opposite now. Perhaps due to Joe Biden forgetting the name of who he is running against two times…not really want you want to see in a Presidential candidate who will become the most powerful man in the world.

I must stress, I think this is just market pricing in the uncertainty of another Trump administration, and I do believe a relief rally will play out after election day. When a market has been pricing in major news, only to see the probabilities of that news fading away, it leads to volatility like today.

What I will be watching this week is the Bond market. I expect volatility this week, which we are already seeing, and I think if you are a large fund or institution, you want to lessen your risk heading into the election. There is really no point in initiating a large position until after the election. This means that money will head for safety. A risk off play. 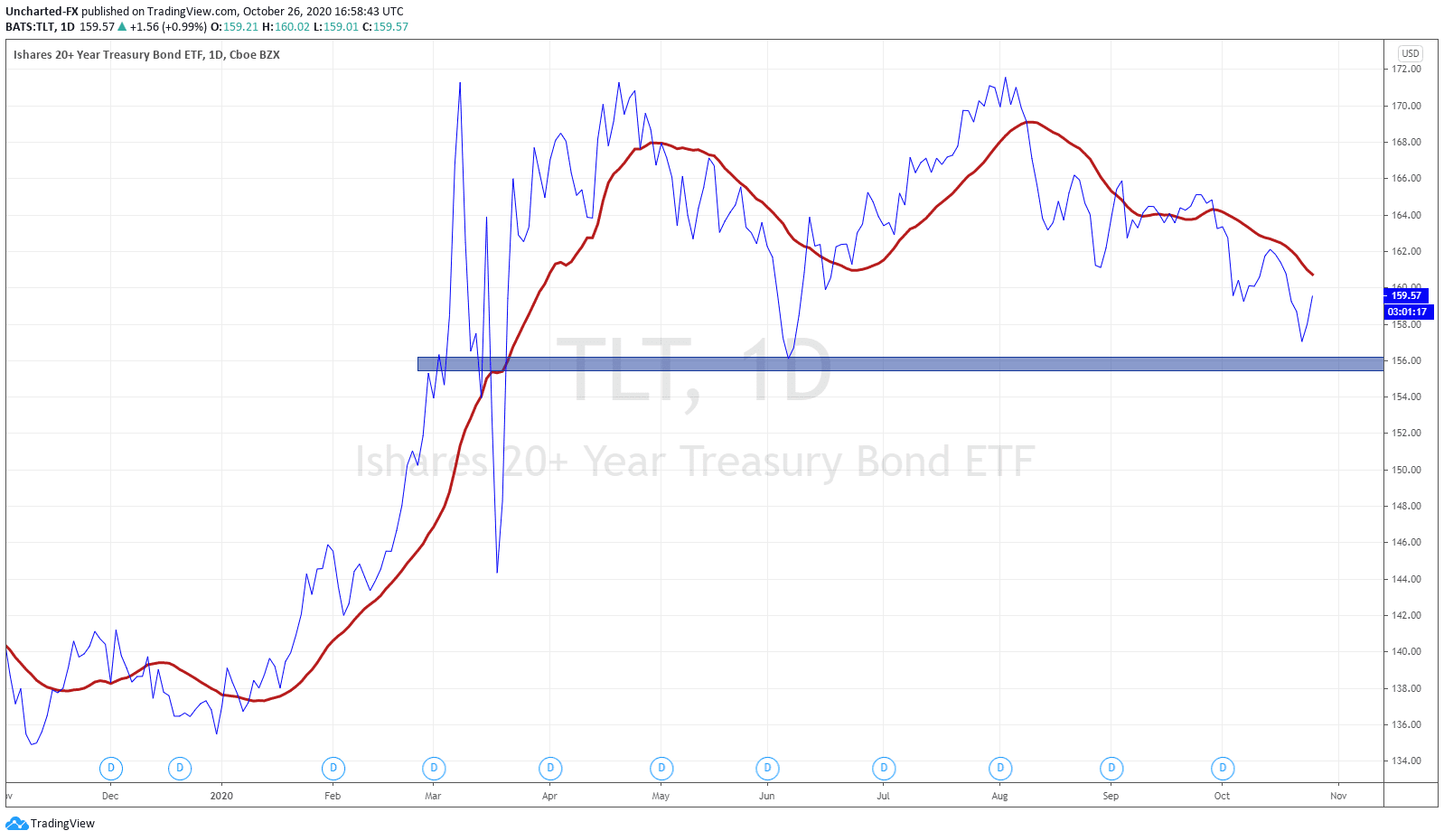 My eyes will be on the TLT. Already a nice pop gap up today. Price was near a support zone at 156, and the buyers did step in. With money flowing into bonds, we should expect yields to be dropping… 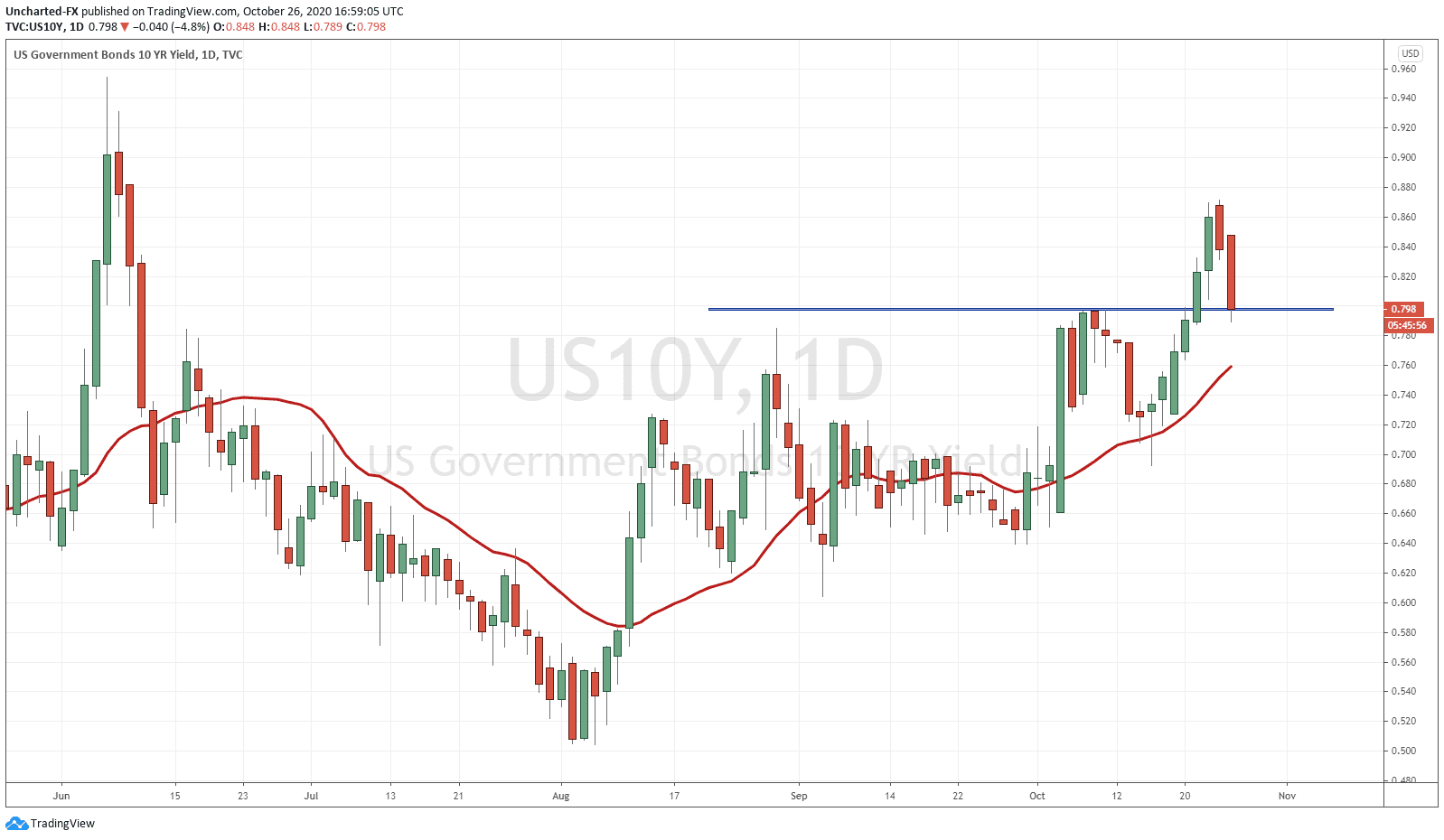 The 10 year yield is retesting a breakout zone, so in order to confirm money is running into the safety of bonds, we need to see the yield breakdown. Remember, there is an inverse relationship between bond prices and yield: when prices move up, yields move down and vice versa.

This means we can expect lower stock markets if money flows out of stocks, and into the safety of bonds. This is the type of price action we should expect to see with days before the election. We cannot predict how markets will react, so it is best to take profits, and buy safety assets until the election is over. A typical risk off move.