In the North American biotech space, you hear a lot of ‘promise’ from companies and their teams. Lots of ‘we’re going to take this to trial’, and a lot of ‘billion dollar industry’ talk. Lots of early stage bets, a little over-hype perhaps. For the most part, you’re being asked to invest in technologies that are untested, maybe under-developed, maybe not anything more than academic speculation waiting for a use case, where the further in you dig, the more questions arise.

Rarely do you get to invest in a technology that’s actually pegged as a cancer treatment, that has been taken seriously enough by four of the top five cancer hospitals in North America that they’ve been involved in trials, and where a body as noted as the Cancer Prevention and Research Institute of Texas (CPRIT) have granted the company over $7 million in non-dilutive research grants.

When the top research organizations on the continent have found enough they like about the opportunity that they’re not just trying it out, they’re handing money over to the team, that’s really intriguing, as I can’t think of anyone more qualified to run due diligence on the company.

Perimeter Medical Imaging AI (PINK.V) is one of those rare opportunities where, the more you look at it, the better it becomes.

As an explanation of what Perimeter does, I can find none better than this, from Dr. Alastair Thompson, Professor, Section Chief of Breast Surgery, and Chair of Surgery at Baylor College of Medicine:

“One of the big problems in breast cancer surgery is that in about one in four women on whom we do a lumpectomy to remove cancer, we fail to get clear margins. That in turn leads to a need for re-operation to avoid high recurrence rates. Hence the need for a good, effective and user-friendly tool to help us better identify if we have adequately removed the breast cancer from a woman’s breast, to get it right the first time.”

In short, removing a breast cancer tumor involves some guess work. One doesn’t want to take too much tissue because the patient doesn’t want to get torn up. But if you don’t take enough, and a little cancer remains, chances are high you’re going to be back soon to get the rest. 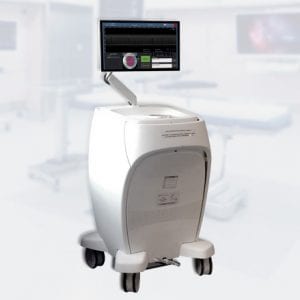 Perimeter Medical Imaging gives the doctor real time feedback to allow them to get more of what they want, and less of what they don’t:

Did you catch that? This tech is used while the surgeon is working, rather than the old method of sending tissue to a lab to be analyzed, and waiting days for results to come back that show you missed something. While there are other devices that can help during surgery, they’re not exactly non-invasive.

The device will examine the tissue sample that is already being extracted,” said Thompson. “Other imaging technology can be more invasive and may require injections or devices placed in the patient during surgery.”

This tech isn’t only useful for breast cancer surgery, but that’s the hill the company has chosen to start on, because it’s such a massive area of medicine and there’s a lot of interest in advances in treatment. They’ve even used the ticker symbol PINK.V to make clear their direction.

Here’s Thompson telling a Houston news outlet how it works:

I don’t know about you, but I know if my mom was going under the knife, every minute she’s under is traumatic, and having to wait hours or days to hear back whether the surgeon has managed to catch everything would be rough on her, and the family, not to mention expensive if she’s required to go back under.

The thing is, this late realization that something was missed happens with around one in four breast cancer surgeries, and the average re-surgery costs around $16,000, according to a 2017 study. In contrast, the Perimeter technology can take as little as 5 minutes to detect an issue, radically reducing the need to go back later.

This technology appears to make sense. If proved out, it could improve medical outcomes, and it could save hospitals and insurers a lot of money.

That said, we’re here specifically to make money, right? Curing cancer is a great pursuit, but you’re looking for places to put your investment dollars. If you can make a nice profit AND help a new medical tech rise to the mainstream, well that’s an investment opportunity I can really feel good taking part in.

So here are the numbers on Perimeter:

If they put their device in 1000 hospitals over the next five years, that’ll bring them $150 million in upfront sales. That’s nice, but at Equity Guru we generally don’t get attracted to up-front revenue models, because the moment you sell one device, you’re back to square one in the hunt for the next. We want monthly contracts, maintenance, or consumables into the bargain.

The device on the right is the OTIS Tissue Immobilization System – a single use consumable used when checking tissue during surgery, that costs US$750 and a high gross margin for Perimeter.

That single-use consumable projects as US$100k of income for each installed machine, per year, or $100 million annually if they hit that 1000 hospital mark talked about earlier.

To aid in the detection of cancer cells, the company also has reference library add-ons, including a proprietary image atlas that grows as the system is used and currently involves over 1.4 million images, and the ImgAssist AI system that uses artificial intelligence to detect what the human eye may miss.

Getting doctors and hospitals to buy in is the next big phase of Perimeter’s plans and traditionally an area where technology can go to die, but there are a few ways Perimeter has removed risk here – and even broached those groups already. 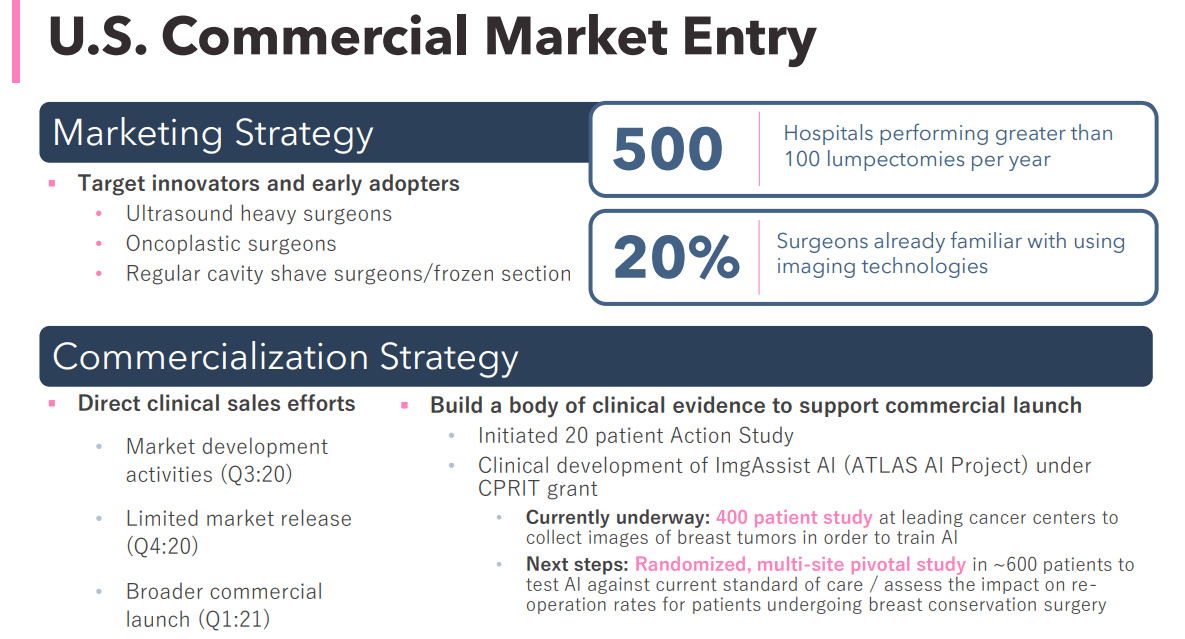 Now, remember, this is JUST for breast cancer utility.

If they start expanding outward into other medical situations, those numbers get torqued pretty quick. 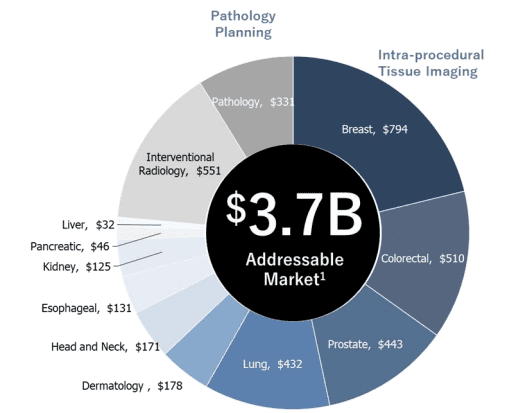 Want to hear more, in the words of those closest to the tech?

Interested in the heavy hitters on the company board and exec team?

Interested in hearing the Chief of Breast Cancer Surgery at Harvard Medical School talking about how Perimeter works for him?

In mid September, the company possessed:

Look, it’s my job to market client companies to potential investors, but I also have a reputation for trying to jawbone a client company’s weak spots out into the open, so you, the reader, can make smart investing decisions.

I just don’t see the weakness here, other than maybe a slight feeling that adding ‘AI’ to the end of an already lengthy company name was putting a hat on a hat.

They have money in the bank, tech that’s already being used, IP that is protectable, studies underway, associations with the legitimately best known hospitals in this area, executives with big biotech experience and money raised, a tech that there’s a genuine use for and a wide potential for expansion, and they’re attracting wealthy family offices into the stock which has seen the company share price grow since it hit the market. 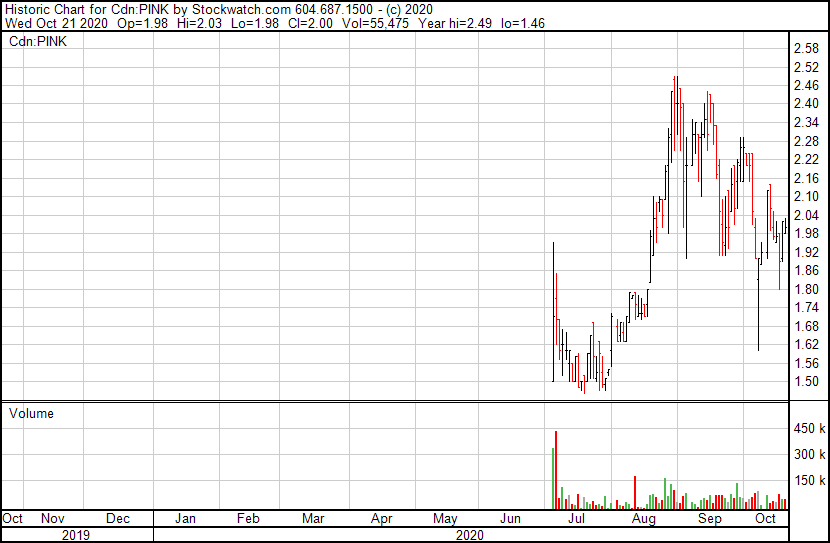 EncodeLP has initiated coverage of PINK and, well, if you think I’m an optimist around this story, you ain’t seen nothing yet.

We believe Perimeter can re-rate over the coming years to the below expected prices based on our internal adoption curve assumptions for base and best case scenarios.

We believe there is a high probability that ImgAssist AI will be FDA-cleared and commercialized, and therefore ascribe a 70% probability to our best case scenario playing out. Probability adjusted, we get to a $11.45 implied stock price which would equate to a return of 567% from today’s level.

There’s a lot to like about Perimeter Medical Imaging AI, but I’m not going to break my neck convincing you of it. If you’ve been paying attention this far, you already know.