That real-time information can help the patient avoid the emotional and physical trauma of re-operating on cancerous tissue left behind. For government agencies and medical insurance companies, it could also save a lot of money.

“Baptist Memorial Health Care in Tennessee charges an average of about $19,000 for excision of a lump in the breast” reports Health Cost Helper, with other hospitals reporting substantially higher fees. 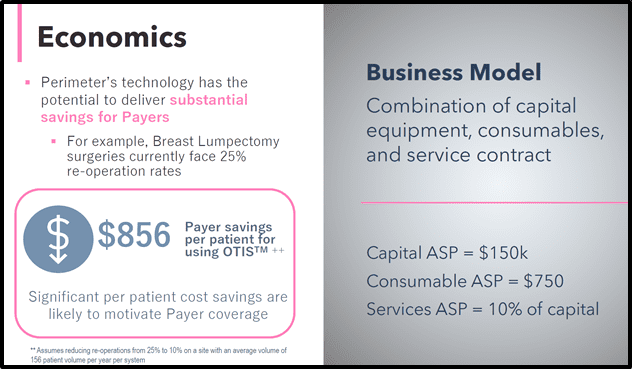 Perimeter has only been trading for 3.5 months, so you could forgive them if they were still scrawling flow-sheets on ketchup-stained napkins.

But that’s not what is happening. PINK is accelerating toward the commercialisation of the OTIS platform. It has already received a $7.4 million grant (non-dilutive capital) from the Cancer Prevention and Research Institute of Texas (CPRIT) to fund the ATLAS AI Project. 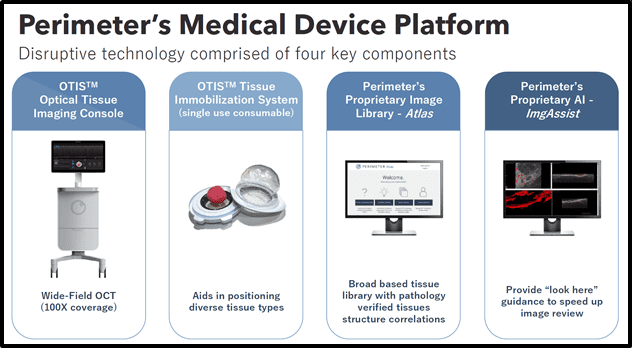 When you take a company public, you have two jobs: 1. Manage the company, 2. Manage the stock.

Good operations people do not necessarily know how to “communicate with the street”.

In a dreary 2016 interview, a mono-toned CEO described his business model to me as, “a re-imagining of Freudian psycho-dynamics leveraging human behaviour in a click-bait society”.

If you can identify the sector – never mind the company – you get a gold star.

That kind of soggy oration causes shareholders to run for the exits.

It’s vital that the CEO has a talent for communicating clearly and forcefully with shareholders.

With a bio-tech company (compared to electric bicycles) that need is even greater – because the press releases can get technical.

In the September 16, 2020 Equity Guru video below, you can see that Jeremy Sobotta knows how to talk to the street.

“Jeremy will continue to represent Perimeter in the capital markets and focus on leading the Company as it grows and executes on its strategic plans,” stated Dr. Anthony Holler, Chair of Perimeter’s Board of Directors, “while we continue to draw upon Tom’s extensive operational expertise to build the appropriate infrastructure for a commercial organization.”

“I am pleased to take on the CEO role and privileged to lead Perimeter’s dedicated team at such an exciting time when we are commercializing our existing specimen imaging technology and completing pivotal clinical studies for our artificial intelligence,” stated Mr. Sobotta, “I see tremendous potential for growth and long-term success with our unique technology.”

Mr. Sobotta has been a part of the deployment of over $4 billion in capital over his career in acquisitions. Prior roles included Head of Finance for the Stryker business unit responsible for surgical equipment and women’s health.

Moving forward, Joe Herman, VP, Finance at Perimeter will take on the financial responsibilities of a public Company under applicable Canadian securities laws, such as certifying Perimeter’s annual and interim financial statements.

Last week, Perimeter reported that it has raised approximately $9.4 million in net proceeds from a private placement offering, with a possible additional $13.5 million to be raised from the exercise of warrants, along with about $8 million of available funding from the previously mentioned grant received from the Cancer Prevention and Research Institute of Texas.

Perimeter believes it is “well capitalized in order to support our clinical development and commercialization plans.”

In July 2020, Perimeter announced the initiation of its ATLAS AI Project, which will collect images of breast tumors to both train and test its ImgAssist AI technology that is currently under development.

Perimeter will install its OTIS high-resolution imaging devices at partner sites, and enrollment is already underway at Baylor College of Medicine and M.D. Anderson Cancer Center.

“The ability to visualize microscopic tissue structures during a clinical procedure in addition to standard of care tissue assessment for decision making during the procedure,” states Perimeter, “has the potential to result in better long-term outcomes for patients and lower costs to the healthcare system”. 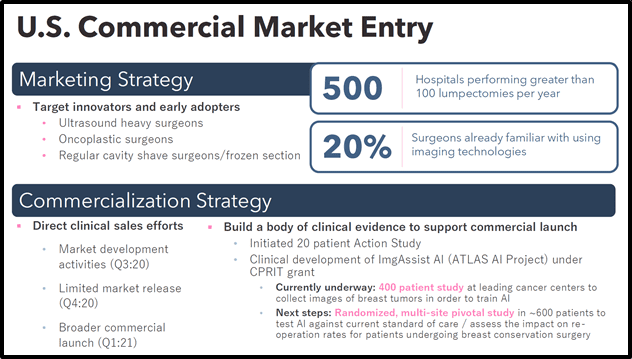 “Breast cancer is the most common cancer in women, threatening them with a one in eight chance of developing the potentially deadly disease,” states Equity Guru’s Reza Golzedah.

“Perimeter is working to help surgeons ensure all cancerous material has been removed on the first incision, eliminating the need for further operations and possibly reducing mortality rates.”

“According to an article posted in Future Healthcare Journal in June 2019: ‘AI has an important role to play in the healthcare offerings of the future,” reports Equity Guru’s resident scientist Ehsan Agahi, ‘In the form of machine learning, it is the primary capability behind the development of precision medicine, widely agreed to be a sorely needed advance in care.’

“Given the rapid advances in AI for imaging analysis,” continued Future Healthcare, “it seems likely that most radiology and pathology images will be examined at some point by a machine”.

Over the years, we’ve seen a lot of good companies that lacked an effective spokesperson.

It’s impossible to quantise how much shareholder value remains un-locked when that occurs – but for any small-cap investor – an inarticulate CEO is a significant negative risk factor.

That tech needs a good messenger.

We believe the new CEO, Jeremy Sobotta, is the right guy for the job.

The OTIS platform is a double-pronged value proposition: saves the patient physical and mental trauma, saves the bill-payer money.