Stocks Drop on Trump Scrapping Stimulus Talks…Art of the Deal or Art of the Fold? 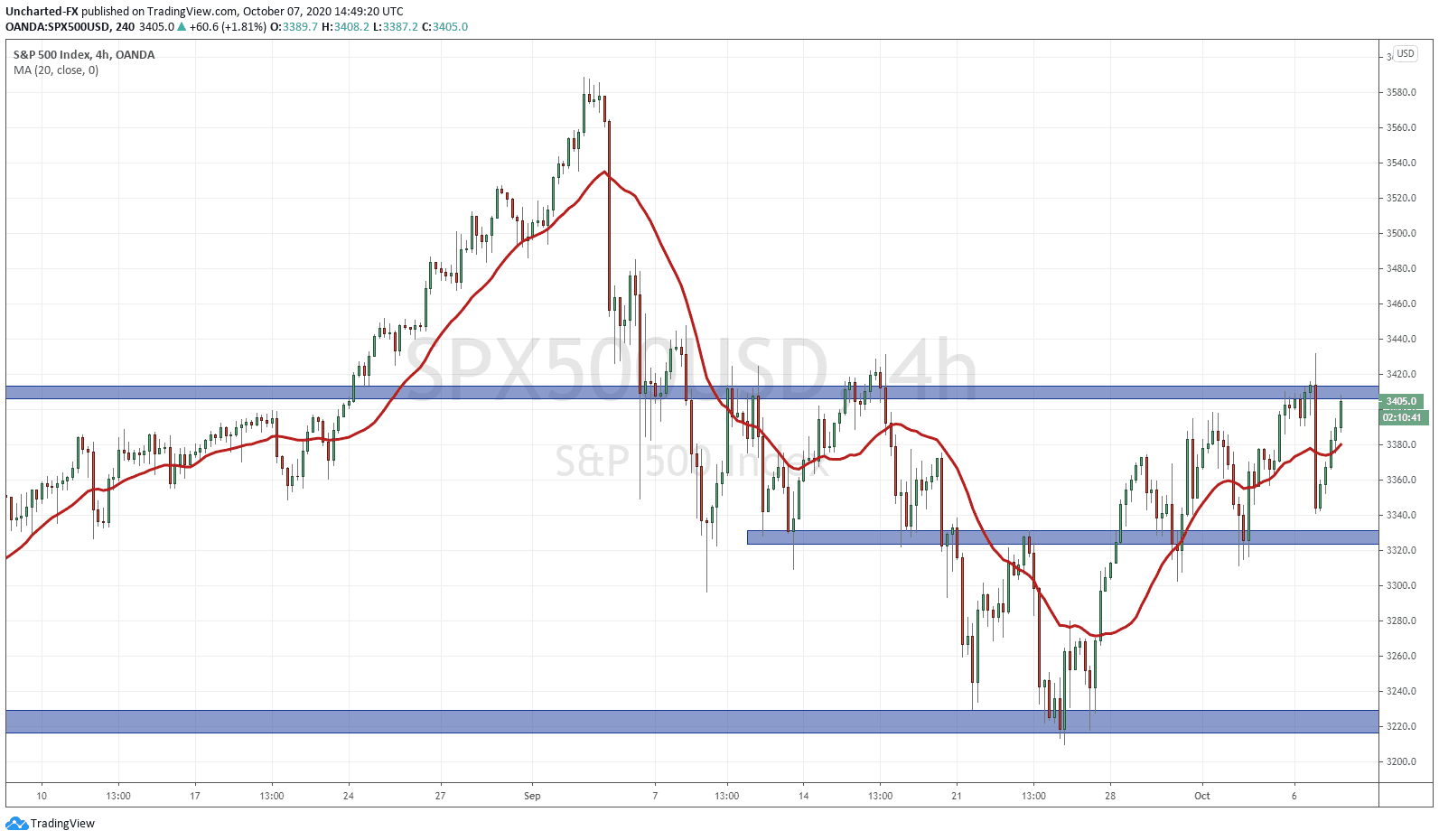 The stock markets had a double whammy yesterday. First of all, Fed chair Jerome Powell was giving a speech. Powell reiterated fiscal stimulus support is required. He was urging the government to get their act together, and even said that there is a little chance of overdoing it. Too little stimulus is worse than too much.

Lot of things to discuss here which my readers have already known and expected. We all know stock markets want more cheap money. They are being propped because there is nowhere else to go for yield. This will not change regardless of who wins the US election.

The fiscal stimulus point is worth discussing and also plays in with an inflation theory. First off, Jerome Powell essentially admitted that the Fed does not have much else it can do. It can keep doing QE and keep buying Corporate Bond ETFs… in the future, they can increase their balance sheet purchases to perhaps even include stocks like the European Central Bank, the Bank of Japan, and the Swiss National Bank. This would turn the Fed into the buyer of last resort. Finally, and this is where it gets interesting for a market participant like me, the Fed can theoretically go into negative interest rates. This would mean that buying bonds for capital appreciation is still a trade. If you know the Fed, or any other central bank will go into the negative or cut deeper into the negative, the bonds you own now, even if they yield next to nothing, will be worth more once negative rates are confirmed. I will be watching this into next year, or perhaps even this year in December. With more government stimulus and debt, negative rates would help governments service their debt. But as we have seen in Europe and Japan, it hurts the banks and does not really help in spurring the economy.

So great, the market heard Powell say we need fiscal stimulus. All eyes now on Washington. Stimulus talks have been ongoing between the Democrats and the Republicans but no agreement has been reached. The market moved on any news of Nancy Pelosi and Steve Mnuchin having a 1 hour conversation which ended with no agreement, but hope a deal can be reached.

Markets reacted violently. If there is one thing the markets hate, it is uncertainty.

Many are saying the President has now lost the election with this antic. Some claiming this is part of the Art of the Deal. Honestly, I was thinking how long it would take for the President to fold and change his mind. And it took less than 24 hours:

“The House & Senate should IMMEDIATELY Approve 25 Billion Dollars for Airline Payroll Support, & 135 Billion Dollars for Paycheck Protection Program for Small Business. Both of these will be fully paid for with unused funds from the Cares Act. Have this money. I will sign now!”

If I am sent a Stand Alone Bill for Stimulus Checks ($1,200), they will go out to our great people IMMEDIATELY. I am ready to sign right now. Are you listening Nancy? @MarkMeadows @senatemajldr @kevinomccarthy @SpeakerPelosi @SenSchumer”

Markets are up over 1.5% and have had an incredible overnight bounce. Donald Pump. 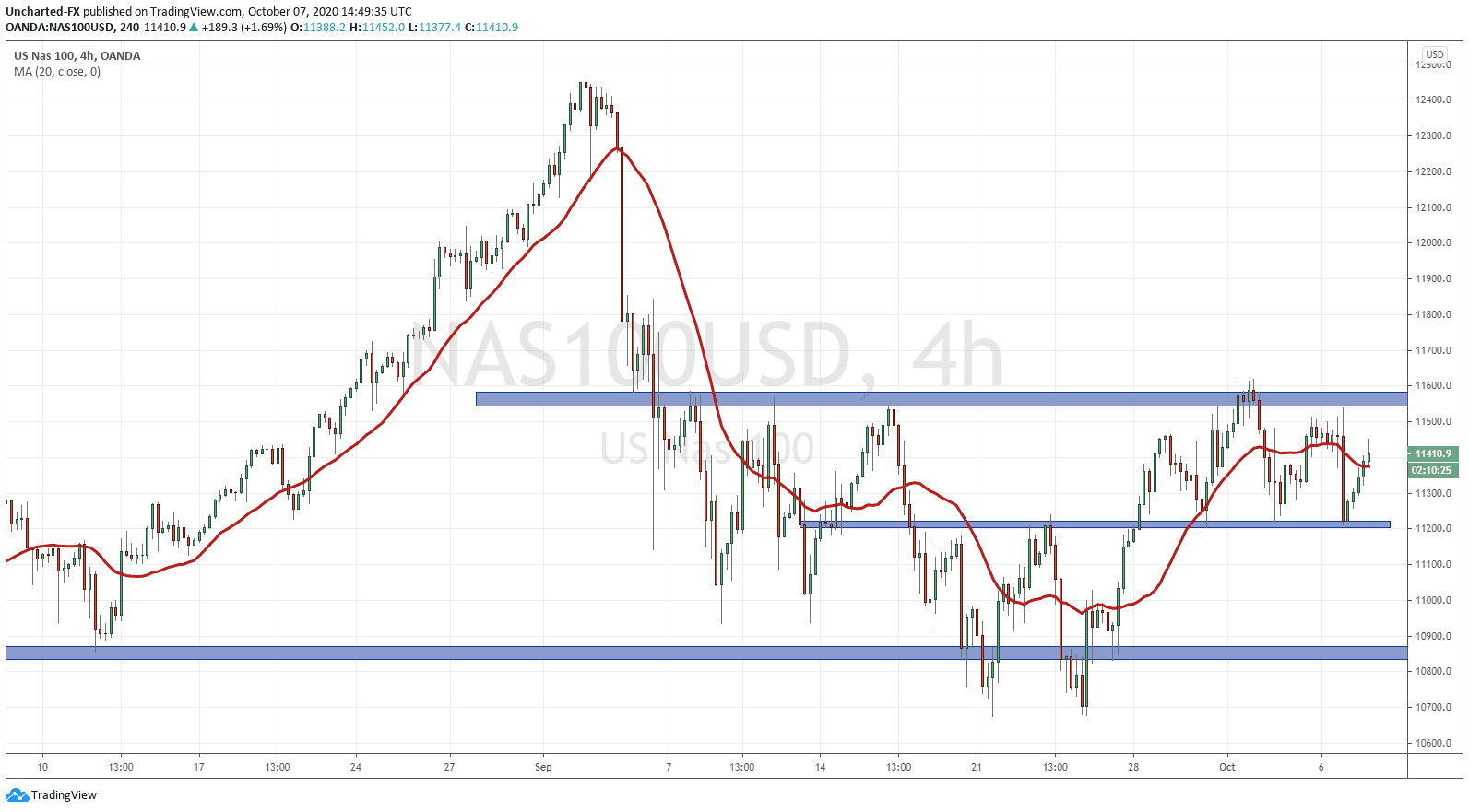 The Nasdaq hit our major support zone which I mentioned to our followers on Equity Guru’s Discord Trading Room Channel. As long as this support is held, we remain in an uptrend. There is a possibility for price to range, BUT if a stimulus bill is now passed as the President has folded…we will break above 11600 and will be on the route to new highs. Sure, the elections can add some volatility. But remember, cheap and easy money will not disappear regardless of who wins.

Meanwhile the S&P is in the same boat. We did not test the support zone to the tee, but we have made up all the losses from yesterday overnight. The breakout is now imminent, or we could range until a stimulus is agreed upon.

Some members of our trade group have been trading small caps on the US market…well: 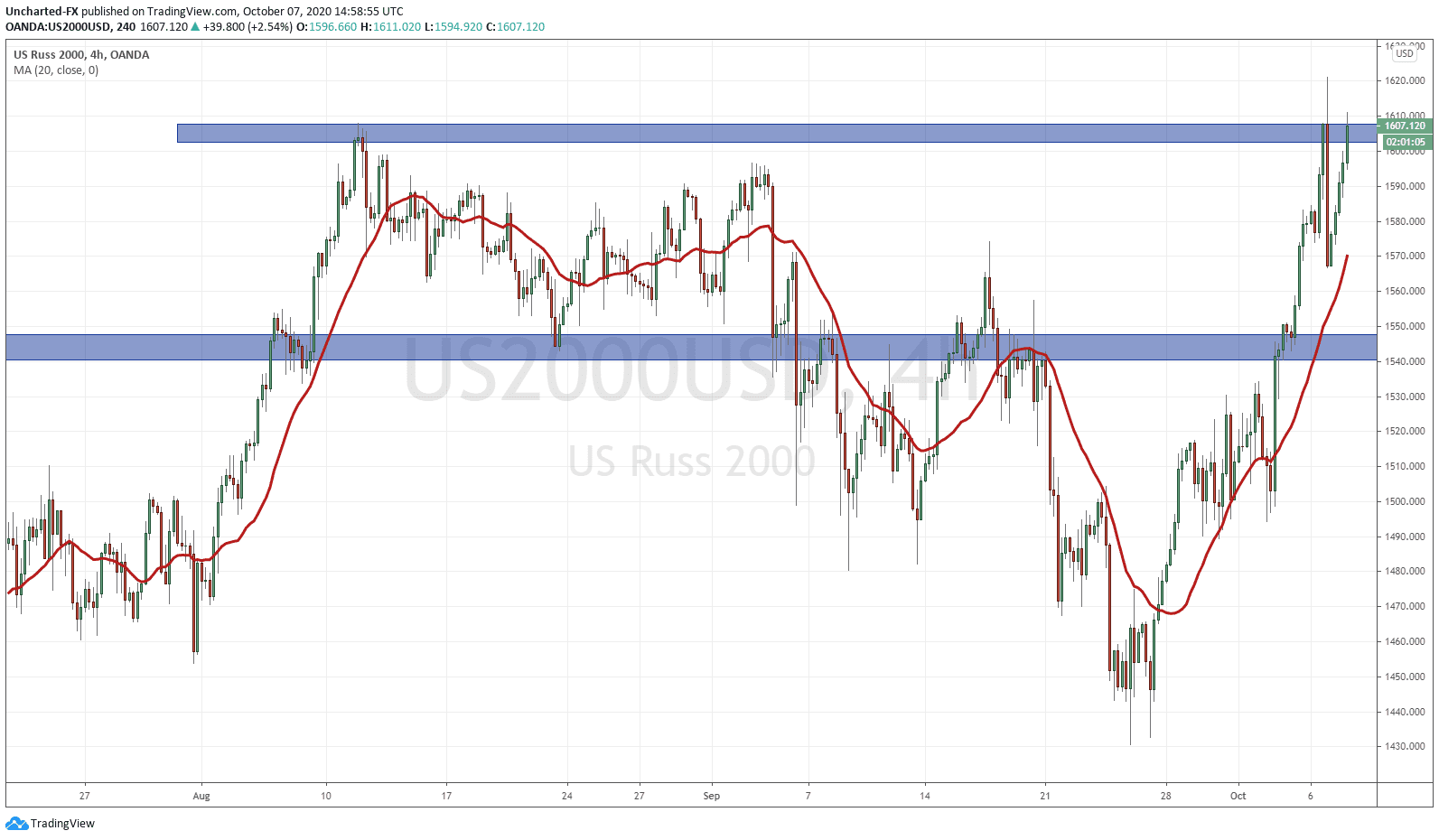 The Russell 2000 has been on a tear. Yes, we did pullback but the uptrend still held. In fact, the nullify zone was all the way down at 1550. The daily chart broke some major zones, and depending on today’s close, we could be in for another breakout momentum trade.

So in conclusion, remember this market is propped on cheap money. This cannot stop. There will be some volatility due to headlines and the election, but the broader macro picture does not change. Once this stimulus deal is reached, it will be the breakout trigger for all the equity markets.