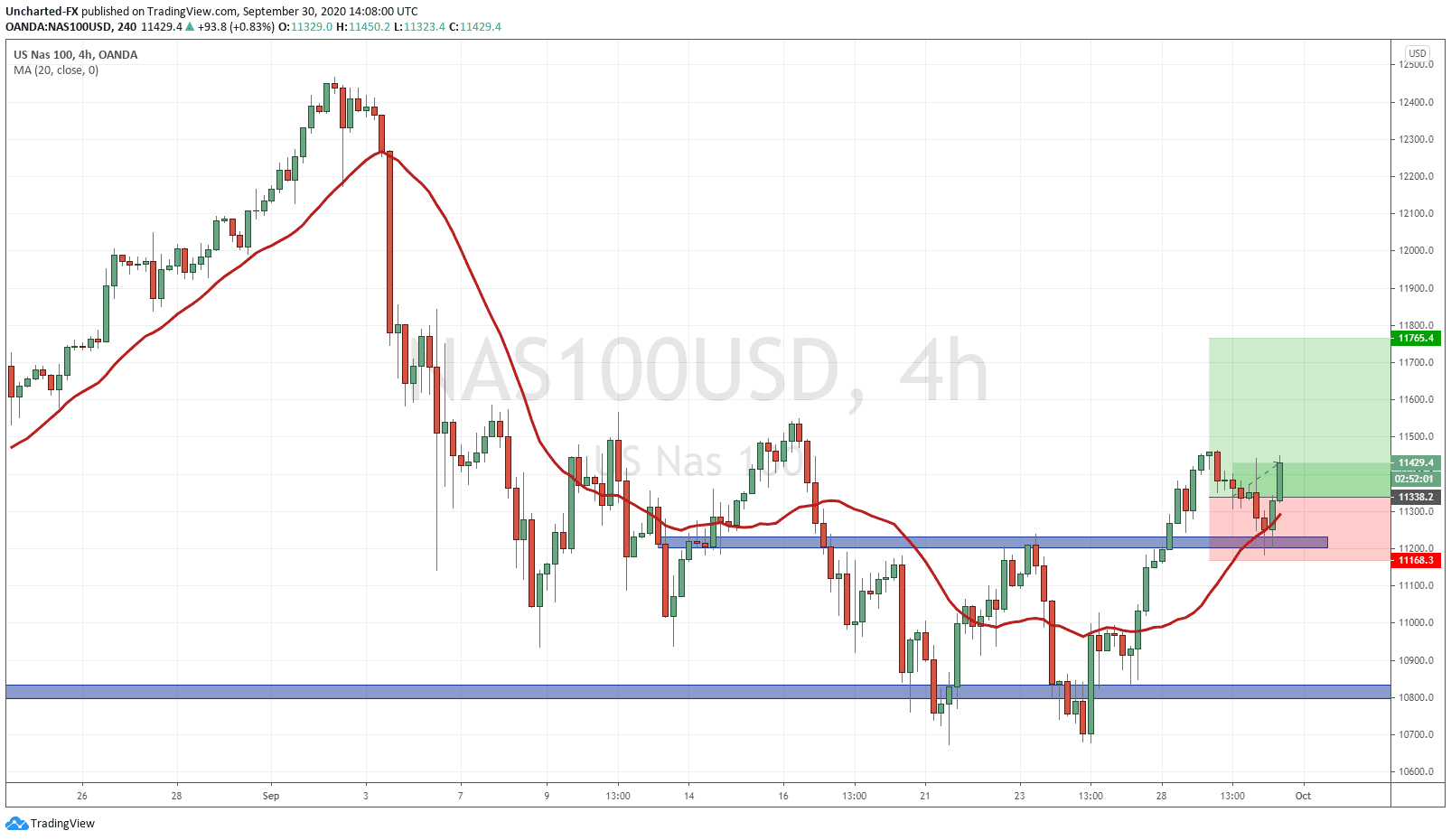 In yesterday’s post, I spoke about the volatility we should expect overnight during the futures open due to the Presidential debate…or as some are now calling it, the freak show. Equity futures initially had a strong rise, but then once all the information was digested, we had a pretty substantial reversal on all three large US equities, crashing more than 300 points. Currently, the Nasdaq and the S&P are bouncing at our support zones, while the Dow is climbing back above to nullify a breakdown.

This morning we are seeing an amazing reversal…and it comes down to the core theme I described yesterday, and many times in the past. Regardless of who wins the election, cheap and easy money is still coming. Sure, a Biden presidency would mean more cheap money due to the spending and social programs, but I think the Democratic candidate blew a major opportunity yesterday which caused markets to fall…more on that in a bit. We had US Q2 GDP released today…a meltdown of 31.4%. Once again, bad data is stock market positive because it means the Fed will continue its easy money policy for a very long time, which means the stock market will be the only place to go for real yield. Let’s not forget the fiscal policy side! More stimulus and bailouts will occur. The airlines are apparently hours away from major layoffs, so we should watch for a SECOND bailout to airlines very soon. America has been promised a new stimulus for weeks, but the Democrats and the Republicans cannot agree on the terms. Well, Treasury Secretary Steve Mnuchin came out today saying that a stimulus deal will still get done and both set of lawmakers will give it a “serious try”. Markets love all this news pointing to more cheap money.

This is really what is propping markets up: the hunt for yield.

I have spoken about the double top pattern on the Nasdaq, with support at 11200. Well, after the Presidential Debate, the Nasdaq fell back to retest this support, and then printed a strong green candle at support. We would call that an engulfing candle, as the body engulfs the previous candles body. The current candle shows us the strength of today’s move at time of writing.

My trade is a retest play. The green candle at support gives me evidence that buyers have stepped in and will hold this support zone. My stop loss is placed just below the lows. My target is the 11800 zone, where we can argue saw some resistance in the past. Mind you, it is not the strongest resistance level, so we can actually climb much higher. However, I like to take pre-set trades with a risk vs reward ratio already established. This trade gives me a 1:2.5 risk vs reward.

The S&P 500 shows the same technicals, and the Dow is inching higher the same way.

So I promised to explain my take on why the markets fell after the debate, and I do believe Biden blew a major opportunity.

Let’s face it, Trump supporters will be voting for Trump regardless, and Biden supporters will be voting for him regardless. This debate was all about garnering the votes of the undecided. The President, with his attacks on Biden, very likely did not gain these votes. I believe that many, and the market now, believes a Biden win is more realistic…mind you, he does lead in the polls too.

But where Biden blew it is the most important part. I explained how you must remove emotions from politics. You must follow the money. People generally vote based on economics, not emotions.  We have seen surprise elections all over the world not only with the 2016 US election but with Brexit as well. Many people who say they hate Trump or did not want to leave the EU voted the very opposite. There was just a stigma attached and people did not want to admit it. If the economy was as strong as President Obama and the Democrats said it was, then Hillary Clinton would have won the election. The issue with the Democrats was small business taxes. President Trump promised a cut in small business taxes, and this is why he won. No surprise that small business sentiment SPIKED along with the stock markets when he won.

So the Biden blow was his economic stance and policy. Or should I say lack of any economic policy. His idea to get the economy back into shape was to shut it down again. That is the last thing you want to do. More jobs will be lost, and even with government aid, many of those people will not be getting their jobs back for years on the recovery. This first lockdown already has done so much damage that we have not even felt yet, another lock down would be the end of it.

The second comment that the markets did not like was Biden saying he wants to increase the corporate tax from Trump’s 21% to 29%. Again, another reason President Trump won was because he lowered Obama’s corporate tax of over 30% down to 21%. A higher corporate tax means more jobs will go overseas. You want a lower corporate tax to encourage companies to invest in the domestic economy. A higher corporate tax under President Obama was the reason why Apple took its money to Ireland to avoid paying taxes. A lower tax rate actually sees more tax being collected as corporations do not feel the need to hide their money. Washington state is a good example of this. They have the lowest corporate tax rate and benefits in the US, that is why many large companies are based there. Because of all the taxes that are being collected, Washington state has NO income tax. The problems arises when government gets bloated and needs more revenue to sustain itself which means more taxation.

Did not want to get into a long discussion of taxes, but economics is KEY to how the vote will go. Biden was the more presidential of the two candidates yesterday, but he needs to work on a concrete economic policy. Watch for this in the future debates.