What Charts I will be watching for the First Presidential Debate

It’s the big day! The first Presidential debate between incumbent President Trump, and Democratic Presidential candidate Joe Biden. The markets have been preparing and anticipating this debate. To me, I find it a bit odd, but it tells us more about the times we are living in. This debate will make markets move. Volatility should be expected. Why? Because we are setting up for the most divisive election in history. Long time readers of my work will recall why I am bullish on Gold and Silver for the long term. It can all be summarized with this: a confidence crisis in governments, central banks and the fiat currency. This is the beginning of the government part. Central Banks and fiat currency confidence issues are on going, and the last domino is negative interest rates by the Fed and other major western central banks. The Bank of England has been the first to consider negative rates, expect Australia, New Zealand, Canada and eventually the US to follow.

Before we delve deeper, I want to show you this data I found on a market watch article. It shows that the first Presidential debate does NOT garner much stock market moves. But once again, this being the most divisive and the market environment we are in (more retail traders etc) can change that.

Note the 2008 market…but we were going through crazy times then with the great financial crisis.

History shows markets don’t typically see outsize moves following first debates, which are typically the most watched. In the election years since 1960 that did feature presidential debates, the median move by the S&P 500 the following day was a fall of -0.14%, according to Dow Jones Market Data.

Right now Joe Biden is leading in the polls. Currently, Biden leads Trump by 6.9 percentage points, 49.8 to 42.9, according to a national average of polls by Real Clear Politics. However, expectations are really low on how Biden will hold his own during this debate.

I must be honest, I am surprised the Democrats are even allowing this to happen. There were stories leaked earlier on with Nancy Pelosi saying debates are meaningless, and we should not even speak with President Trump. To me, seemed more of a way to try and get Biden out of the debate, because I think they know he doesn’t stand a chance. This is the big key point I am watching. If Biden holds up well, the idea of him being presidential material strengthens, and this could be stock market positive.

Financial media disagrees with me:

As a general rule, analysts view the prospect of a second-term for Trump as a positive for stocks, while a win for Biden is seen as potential fodder for a retreat, particularly if Democrats wrest control of the Senate from Republicans while keeping control of the House.

Readers know about my thoughts on easy money and cheap money. It is what is keeping markets propped as money must go to the markets to make yield. So I see this election as noise and volatility, because in the end, one constant will not change regardless of who wins the election: cheap money. So I think markets will move up regardless of who wins, but that will be a post for some other day. In terms of Biden being negative for the stock markets…perhaps if you factor in geopolitics. The Chinese and the Russians loved President Obama because he was quite weak when it came to reacting to their geopolitical moves. However, domestically, a Joe Biden presidency means MORE cheap money. More social programs and spending, meaning negative interest rates are more likely in order for government to service the debt. Markets would move much higher on a Joe Biden win than a President Trump win for this reason.

For today, uncertainty will be weighing in on the markets, and I would not be surprised to see a range day during market hours. Equity futures will scramble during the debate. I expect to see price moves similar to US NFP data (when it really mattered) and Fed Interest Rate Days. If you have the chance, I would suggest watching the charts of the US equities, the US Dollar, and Gold intraday just to see how price moves during the debate. 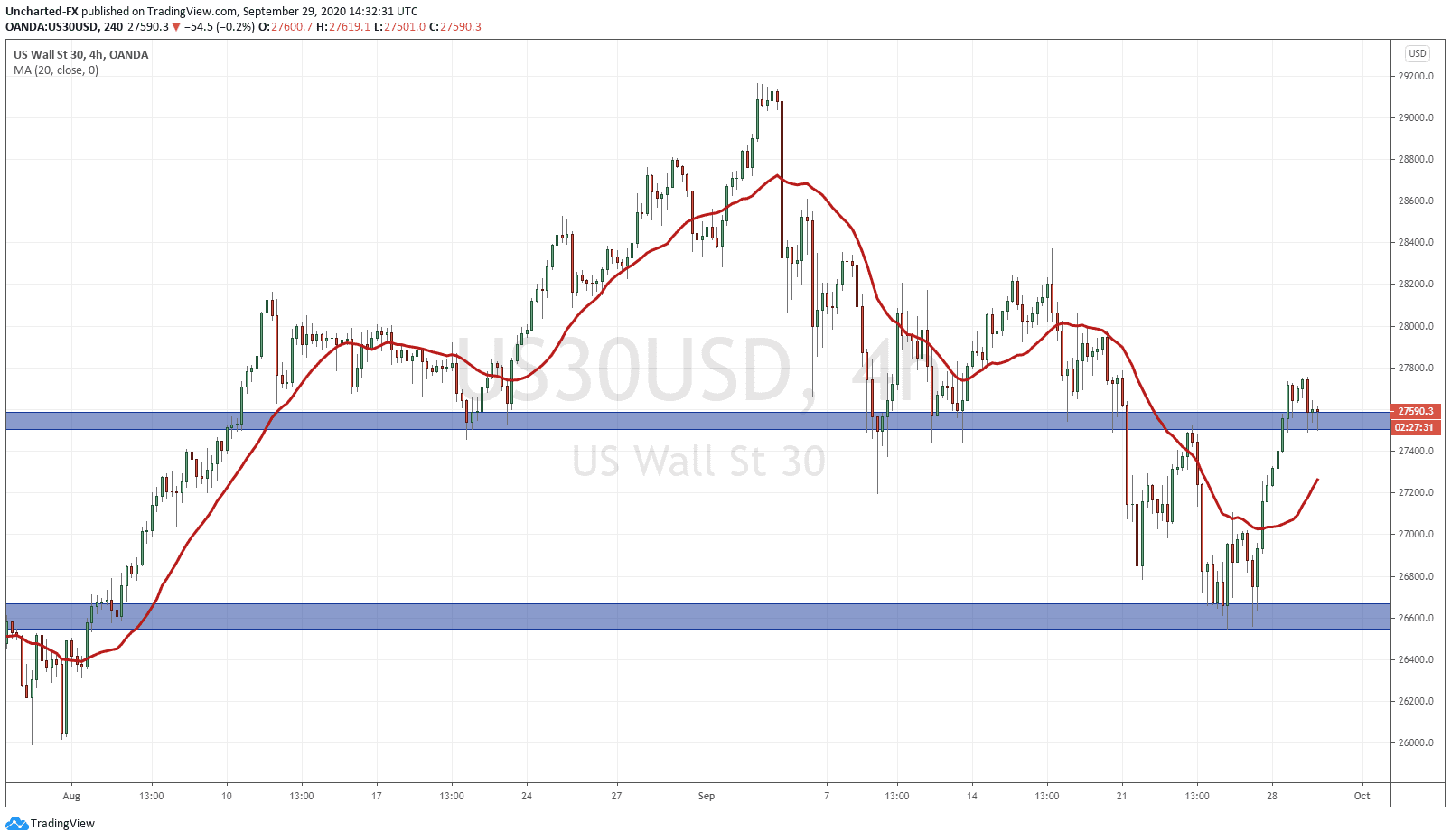 The Dow will be at the top of my list as we did close back above my head and shoulders neckline, nullifying the bear trend. If we do have volatility and uncertainty, this can very well change with another red candle close below this support. Above, I have the 4 hour chart. You can see we are now retesting this zone now as support. Very big level which will tell us if markets continue higher, or we sink lower on the road to the election. We have already ranged here for the past 12 hours. 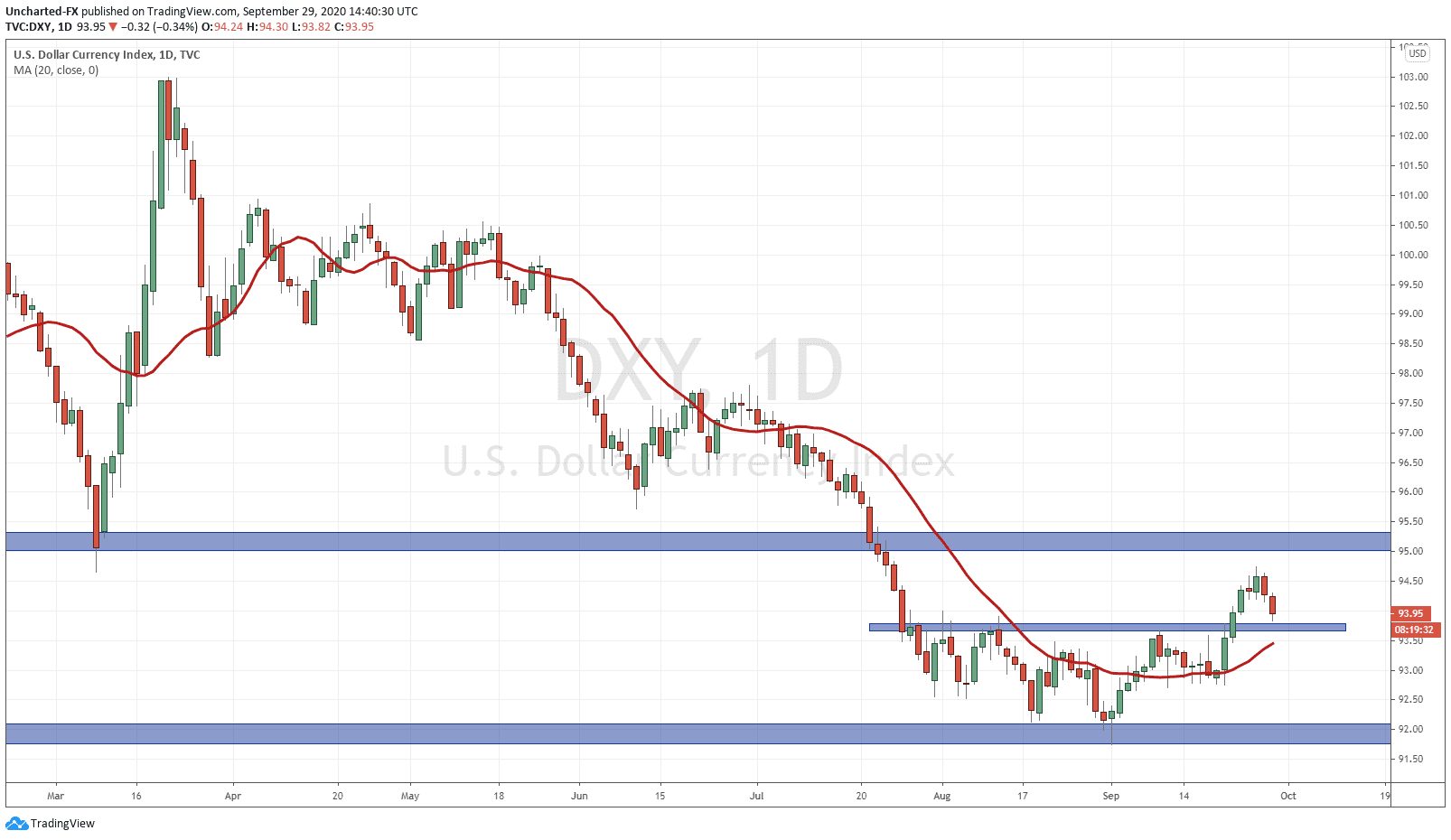 The US Dollar (DXY) is one I have been talking about on Market Moment, and over on our Trading Discord channel. The bottoming pattern is too good to ignore. I did take Dollar long trades last week on the USDCAD and the EURUSD, but closed them as I was expecting a pullback. I like the fact the Dollar is now retesting this support zone. Something that is normal. Price generally retests the breakout zones eventually. I am expecting a bounce from here and a US Dollar move higher. In the past, I spoke about how markets and the Dollar can move together. The catalyst would be foreign money buy Dollars to buy US stocks. But now, this will likely happen AFTER the elections. There really is no point initiating large positions now as there will be some volatility and wild swings during this time period. 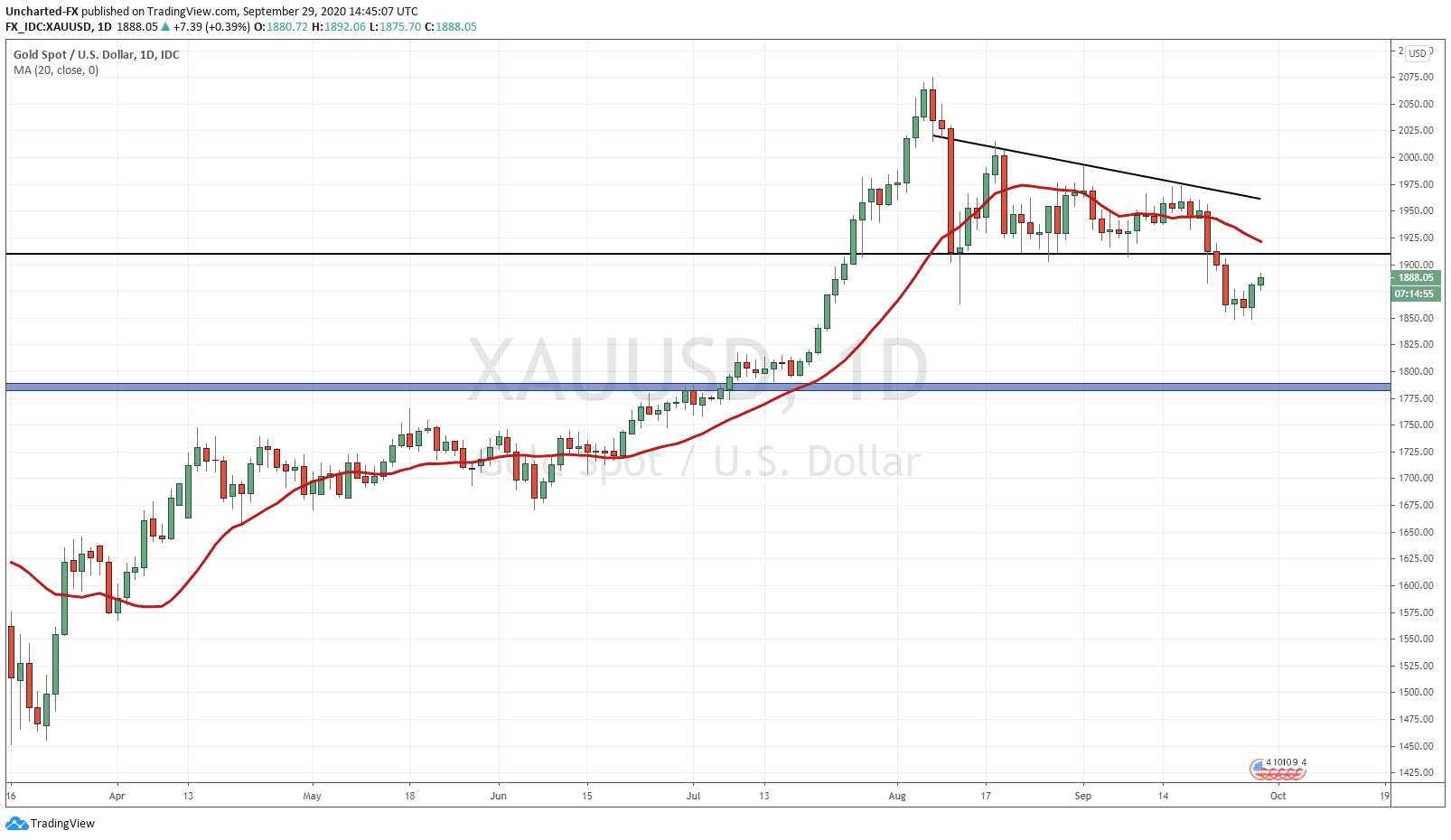 If the Dollar is going to move up, then my targets for Gold to 1800 and Silver to 20.50 seem more likely. Recently, we have seen equity markets and the metals move in tandem. Either an everything sell off, or an everything rally. Today we are seeing on of the first days where metals and equities are moving in opposite directions. Could this be the beginning of the divergence? We will have to wait and see.

So in summary, I do expect some volatility today due to the uncertainty. I will be watching to see how Biden performs as expectations are low. But remember in the end, do NOT get too emotionally attached to these things. This will be a circus. Focus on the money side of things, and market participants will begin to understand that regardless of who wins, cheap money is not going anywhere.