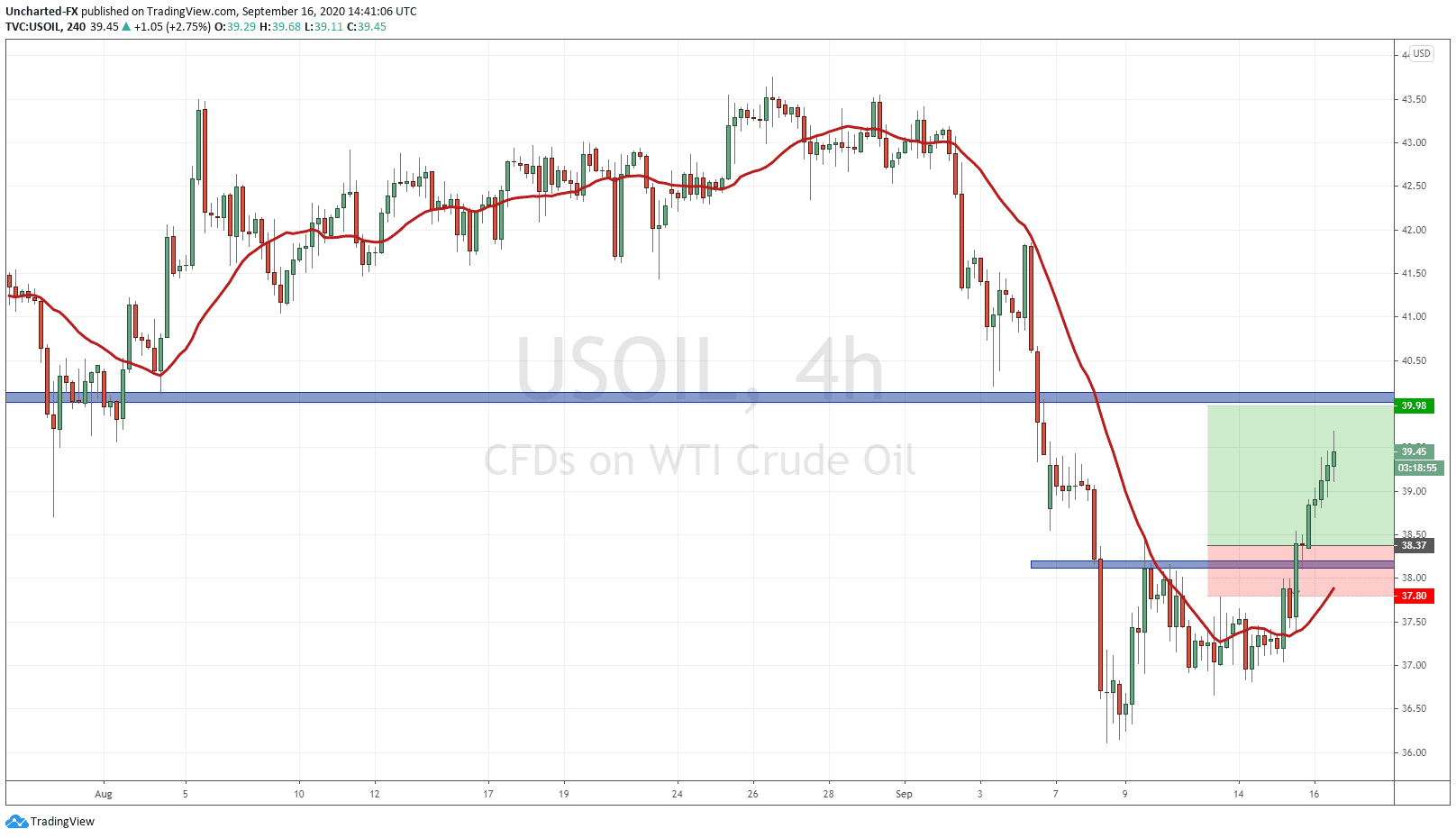 It has been awhile since Oil has made an appearance on Equity Guru’ Market Moment. The last time was when I spoke about the inverse head and shoulders pattern, and why this was bullish for Oil. We killed our long trades then. The breakout from the neckline of that pattern from $34.00, led to highs at $43.75. A daily chart trade is a much longer swing trade hold, and if you missed that retest on June 12th 2020, I do not think it was worth chasing. As you can see, Oil gradually inched higher and higher, but it really has been a boring market. 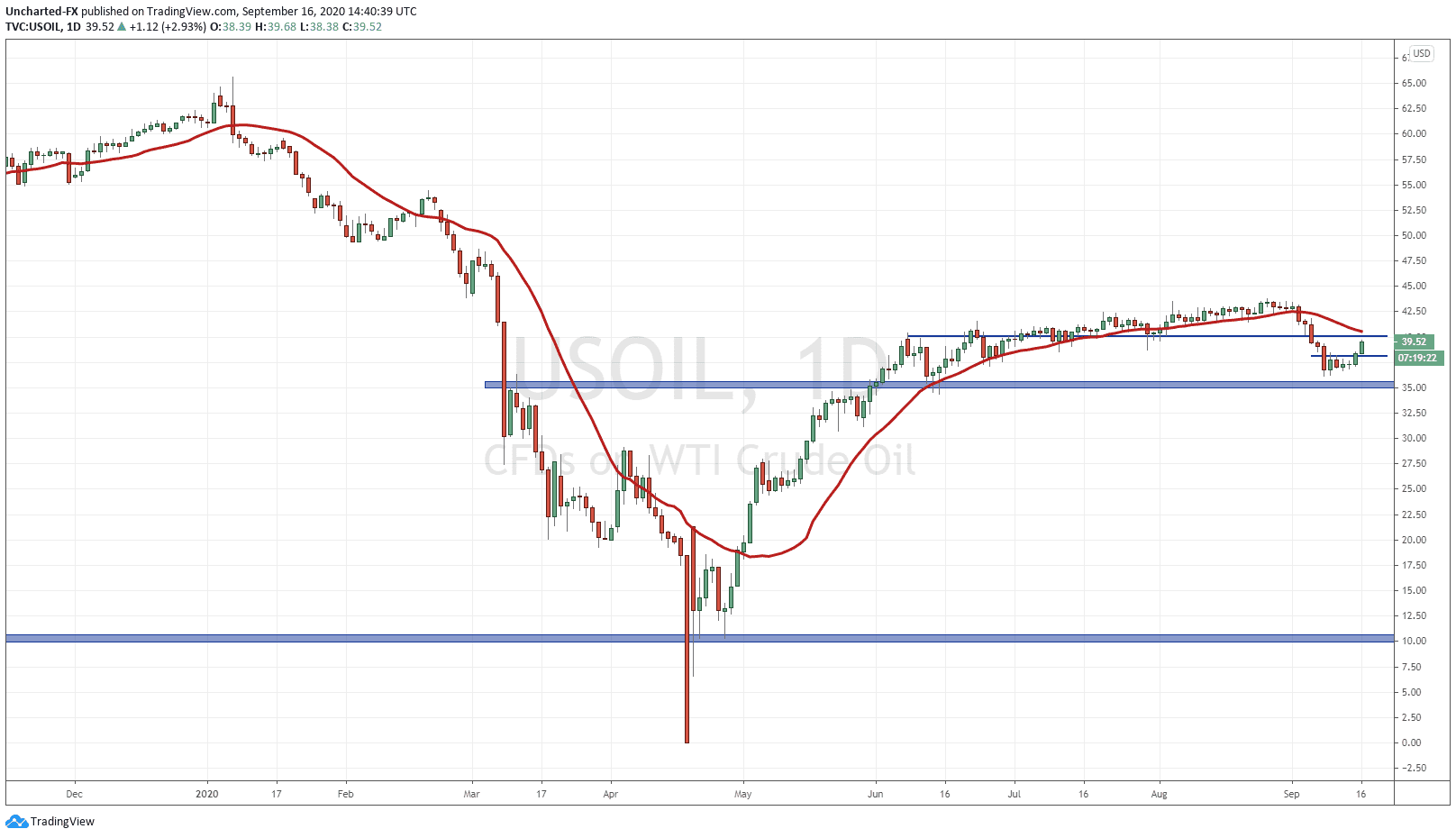 In the first week of September, we got news that the Saudi’s were cutting their prices in anticipation of weaker demand…another factor which raises doubts of the whole V-shaped economic recovery. This led to Oil falling on the daily charts, but as you can see from the chart above, we pulled back to a major support zone, in fact the neckline of that inverse head and shoulders pattern, before basing once again.

The trade idea that I have taken, and am still holding at time of writing, was triggered on the 4 hour chart.

What should draw your attention is the downtrend with its multiple swings (lower highs). We made more than 2 of them which is something I look for when I am considering a trend exhaustion and an imminent reversal. Once again, the reversal trigger is some sort of pattern such as an inverse head and shoulders or a double bottom pattern. The fundamental news that came out too was Iran threatening an attack on the US for revenge of the death of their General Suleimani.

In this case, Oil stopped making new lower lows when price touched the $36.50 zone. We saw price spike up, and then sell off, only to be bid back up again. The trigger was the break above $38.00. Which we achieved with a nice large green candle. Price began to bottom here, rather than form new lower lows which is a key for us.

My target is the $40.00 zone which we are only 50 cents away from testing. I may take half my position off and hold the rest. I do expect a pullback to form a higher low in a new trend, so depending on the resistance reaction and the candle close, I will make my decision candle by candle.

Perhaps the better play would be on UK Oil, or Brent. 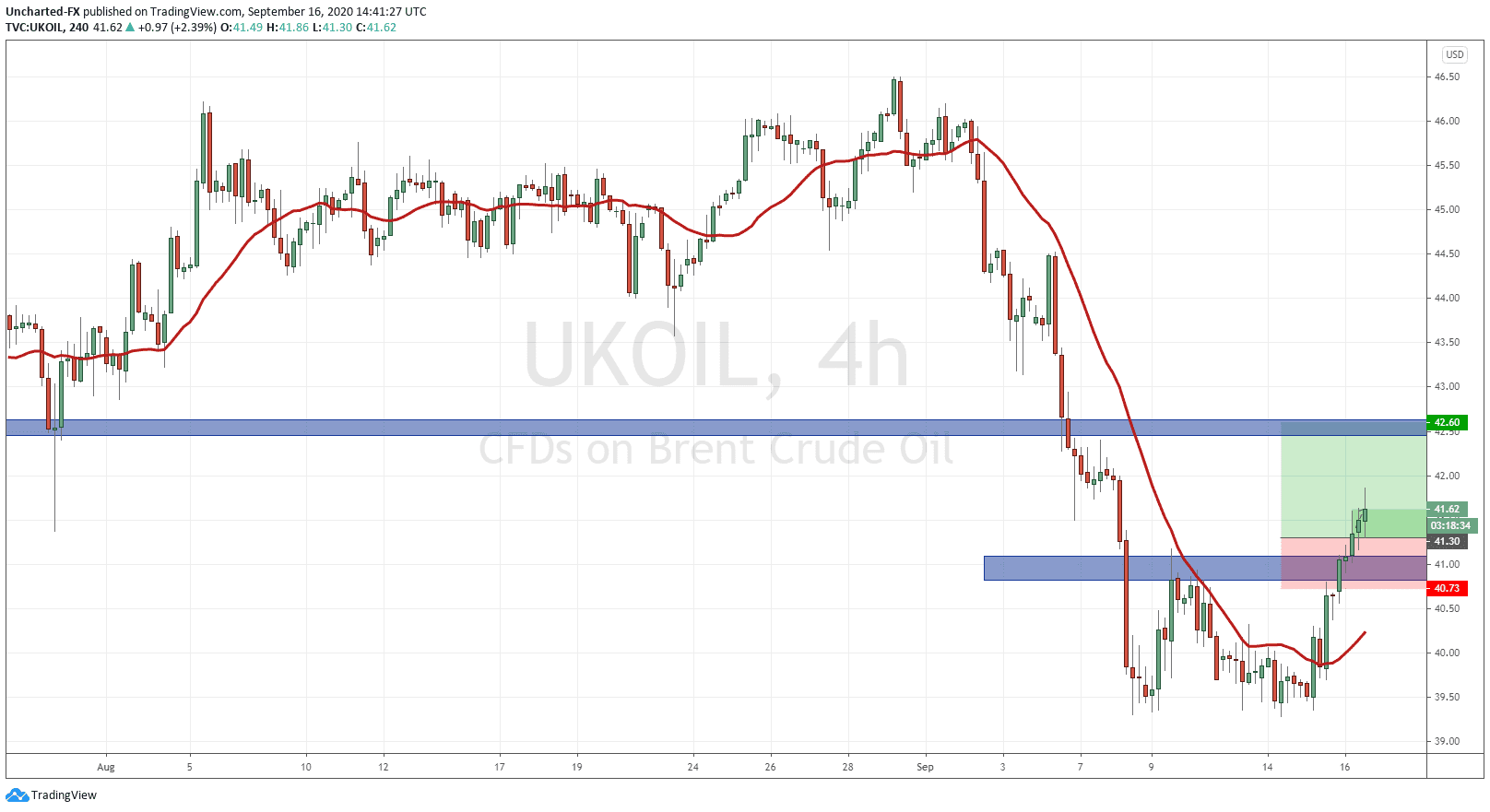 This has a better basing pattern, as instead of breaking below $39.50 to make new lows, we instead created a double bottom pattern with a neckline/resistance at $40.82. Price closed above this zone yesterday, and I entered on the break. I have a tight stop loss below the breakout zone, and am targeting the $42.50 zone. Same thing applies as US Oil: I do expect a possible pullback to make our first higher low. This could mean a retest of the breakout zone before moving higher. Depending on the candle print at the retest zone, this can be an opportunity for us to add to our positions.

To keep up to date on this trade idea, be sure to join us over on our Trading Discord Channel.