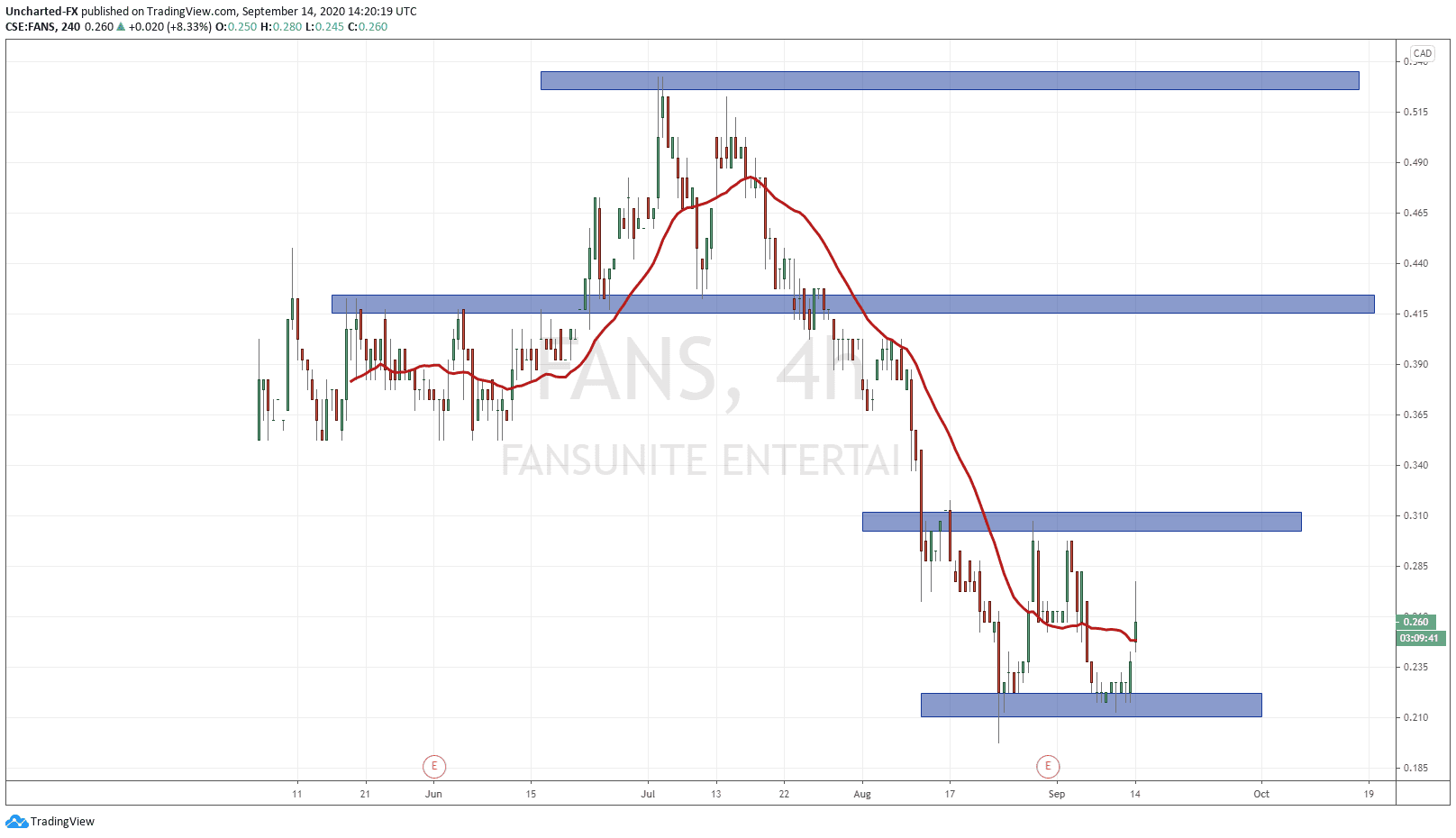 FansUnite (FANS.CN) was a chart put on on our trading discord channel last week, watching for a bottoming pattern. The stock is up over 10% at time of writing. To me, this is just the beginning as I see a larger overall bottoming pattern playing out.

Firstly, price was in a prolonged downtrend, and as we know, according to market structure, price cannot move down forever. Markets move in cycles and in three ways: uptrend, range, downtrend, and our job as traders and investors is to find signs of one trend exhausting, indicating the beginning of the opposite trend. For the case of FANS, from a downtrend to an uptrend.

Price hit lows of 0.20 before popping back up. It gave us a large wick candle pointing towards a fake out, but remember: the trigger to confirm a fake out is a subsequent candle which closes ABOVE the wick candle. We got this on August 27th. In comparison, look at the large wick candle on August 12th, and right near my resistance zone (top left of resistance). Similar looking candle, but we did not get a subsequent candle close above which meant the fake out was not triggered, and naturally, we moved lower.

That was an initial fake out entry, where you would have placed your stop loss below 0.20, and are now holding for a larger move higher. If you have not entered yet, do not worry, there is still a chance for entry.

Let’s fast forward to last week. Price went back to retest the previous candle body lows and support at the 0.20-0.22 zone. Notice how we ranged here for 7 days. Pay attention when price acts like this on the larger time frames, especially at an important support zone. This is usually a sign that price is ready to reverse as the bears could not take price lower even on multiple days of attempting to do so. Friday’s daily candle then printed a large engulfing green candle which engulfed the previous 7 days worth of price action. Another strong sign. This was another entry trigger, which meant you would have placed orders for today morning to enter, with stops below the lows at 0.20. But do not fear, there is another chance of entry which meets much of my criteria.

As my followers know, I like to trade reversal patterns. The top two are of course the head and shoulders pattern and the double bottom/top. Most of my trading and investing is remaining on the sidelines until a pattern triggers. My readers have probably seen the pattern when I posted the chart, but with today’s bounce, we are on the road of forming a double bottom pattern.

This is a quintessential reversal pattern, and forms a “W” shape, with two lows holding support being a hallmark. It indicates the trend is exhausting because no new lower lows were formed. The trigger for this pattern is the actual breakout of the resistance which is at the 0.31 zone. Once that is taken out, we are officially in a new uptrend. This is the actual trigger. Currently, we are front running this pattern with earlier entries, and accept the possibility and risk that price can move lower. Honestly, the risk vs reward is too good at these levels, as a break above 0.31 would take us to the next resistance zone at 0.41 and then eventually all time highs at 0.53 in the long term.

FansUnite is a sports and entertainment company, focusing on technology related to regulated and lawful online sports betting and other related products. Our mission is to be the iGaming industry leader by providing our partners and players the industry’s most versatile and vertically integrated platforms with a portfolio of unique products and a focus on esports, sports betting, casino and the next generation of bettors.

Last week, on September 9th/2020, FansUnite announced that their Scottish based McBookie subsidiary, increased year-over-year turnover for the months of July and August by 108% – from CAD $3 million to $6.3 million, with 78% of the turnover growth led by the return of live sports.

Our very own Lukas Kane covered the recent FansUnite news, and other fundamentals here.

With sports starting up again such as the NFL and, more importantly for me, the English Premier League, sports betting is definitely a sector I have been following ever since watching the price action on DraftKings.