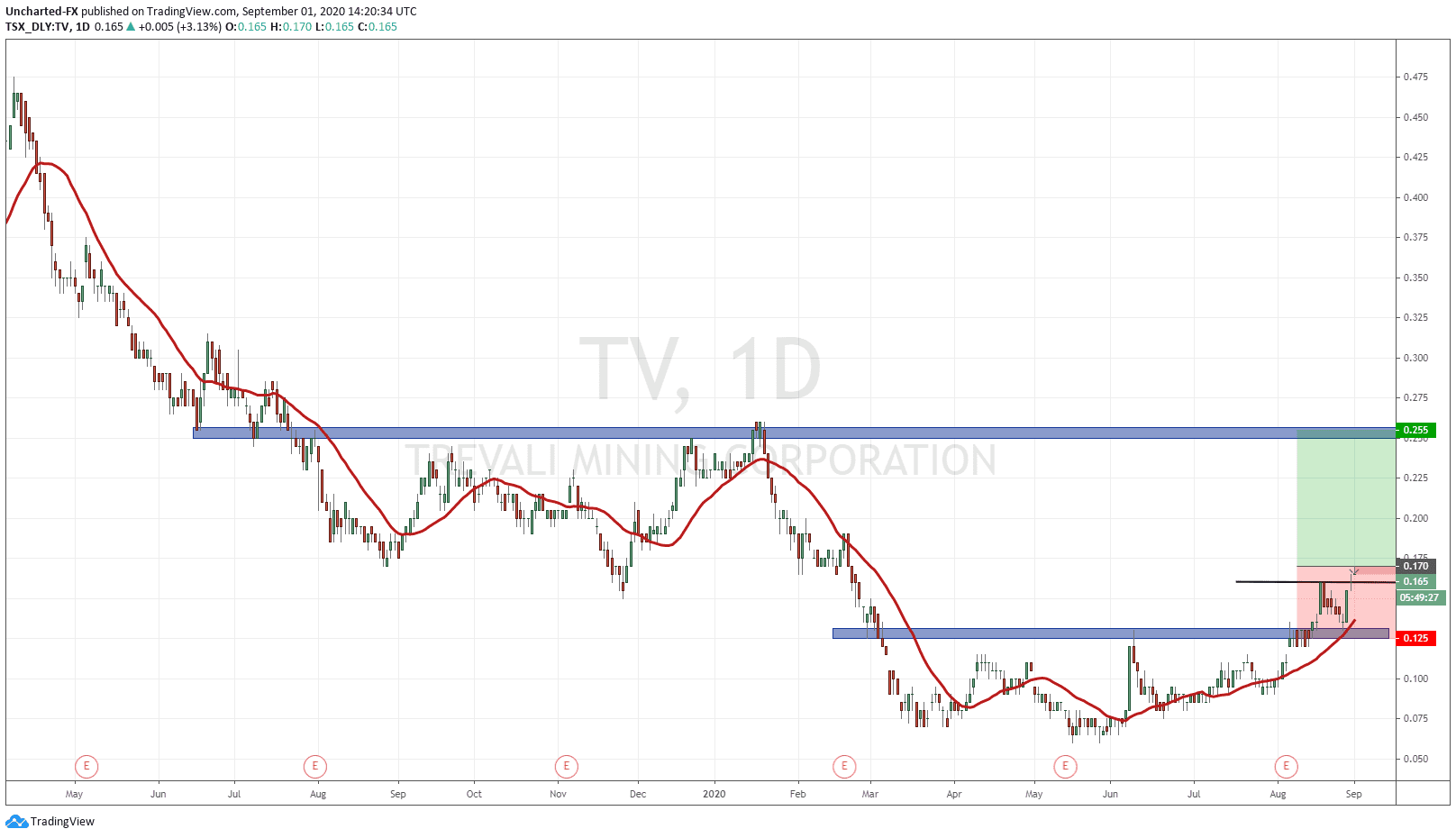 Trevali Mining (TV.TO) has been a mining chart I have kept my eyes on, and notified the members of our Discord Trading Channel about a potential bottoming. At the time, Trevali was not moving as much as other miners. We discussed the opportunity to find lagging stocks, as we do believe a mania in metals and mining stocks is approaching which will be akin to the alt coins moving during the Bitcoin mania.

The key for an entry though is we need some signs of a reversal pattern. This has been achieved and confirmed.

Firstly, the chart has been in a prolonged downtrend, but we could see the trend was exhausting as no new lower lows were being created. What happened instead? We created an inverse head and shoulders pattern giving us our first higher low to work with. 0.125 was the neckline we were working with as resistance. Well, that zone broke, which was the trigger of the inverse head and shoulders breakout. Price moved up for two days before pulling back to retest the breakout zone. Once again, this pullback is entirely normal, and is what I prefer to see.

As you can see from the chart, the buyers did in fact step in when price retested 0.125. And I mean strongly. We formed an engulfing candle, a candle with a large full green body which indicates the strength of the buyers. This is a very powerful candle especially when it appears at breakouts/breakdowns and on retests of previous support/resistance.

There was an opportunity to buy when price did retest the 0.125 zone. However, another opportunity would be to enter today. Price has broken above previous highs as you can see from the black line I drew. What this means, is that the retest of 0.125 has been confirmed, because it really is the higher higher that tells you the momentum will continue. Technically, it would be safer to await the daily candle close today, and await tomorrow. But I do like the strong engulfing candle as mentioned before, so yes, there is some more risk for not awaiting the close, but the confluence with the engulfing candle is hard to ignore.

The trade is valid as long as we remain above the 0.125 zone. I have placed my stop loss below this. In terms of upside targets, I like to target flip zones… or a zone which has been BOTH resistance and support in the past. That would come at the 0.24-0.25 zone. The risk vs reward is at 1.89 which is not what I really like. The stop loss or take profit can be slightly adjusted to obtain 1:2 risk vs reward.

So the technicals look good, what about the fundamentals?

Trevali is primarily a zinc play, and the stock is moving due to the rise in base metals. From their home page:

Trevali is a global base-metals mining company, headquartered in Vancouver, Canada. The bulk of Trevali’s revenue is generated from base-metals mining at its three operational assets: the 90%-owned Perkoa Mine in Burkina Faso, the 90%-owned Rosh Pinah Mine in Namibia, and the wholly-owned Santander Mine in Peru. In addition, Trevali owns the Caribou Mine, Halfmile and Stratmat Properties and the Restigouche Deposit in New Brunswick, Canada, and the past-producing Ruttan Mine in northern Manitoba, Canada. Trevali also owns an effective 44%-interest in the Gergarub Project in Namibia, as well as an option to acquire a 100% interest in the Heath Steele deposit located in New Brunswick, Canada.

Matthew Quinlan is departing as Trevali’s Interim Chief Financial Officer effective August 31, 2020. Mr. Quinlan has served as Interim CFO since March 3, 2020 after having supported Trevali in a consulting capacity since October 2019.

In fact, this came out on August 28th…the day we retested the breakout zone at 0.125 and created the engulfing candle on the market close.

On the 25th of August, Trevali announced positive results on their pre-feasibility study at Pinah mine in Namibia. Some highlights include:

Finally, Q2 results were announced on the 6th of August, including a resissue of 2020 guidance with lower all in sustaining costs: