Fed Adopts “Average Inflation Target”, My Thoughts on Inflation being a Psychological Phenomenon 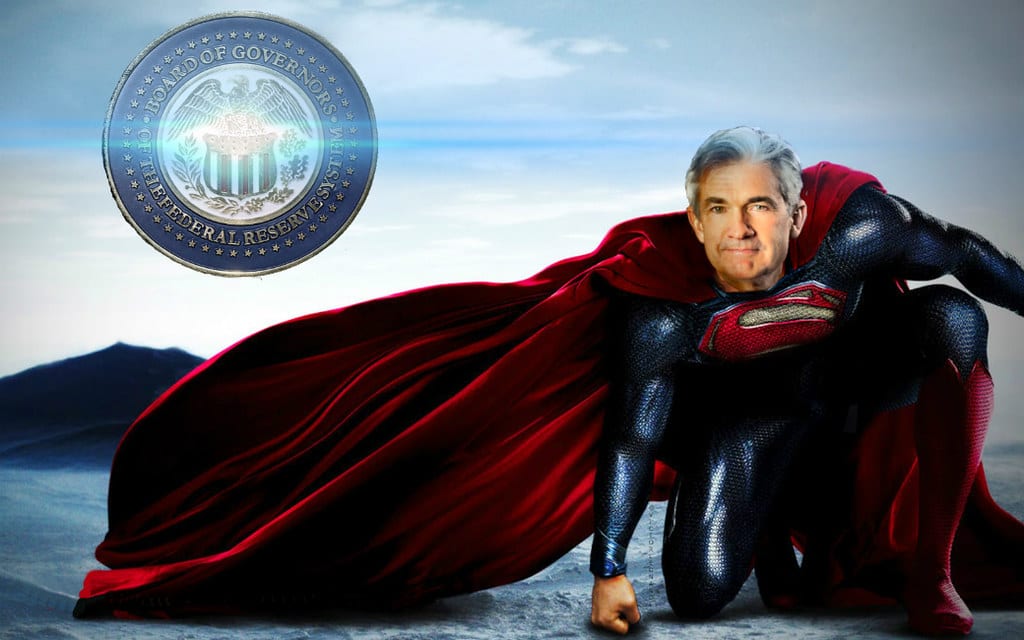 Markets are digesting the Jerome Powell Jackson Hole speech, and we are seeing the volatility as predicted. Markets are green but the real action is in metals, the US Dollar and the bond market. Gold and Silver plus the US Dollar playing out exactly as I predicted. A pop and a fake out. The Dollar is likely to create that bull move, be it a correction or pullback, which will take Gold and Silver down to the target zones of my short trades. The move in the 10 year yield and the bond market in general is massive! What is happening is that funds and money managers are now in the process of re-balancing their portfolios. Remember, the famous asset allocation model is split between stocks and bonds, and I do believe the stock portion is going to be adjusted to carry more weight in portfolios. We are witnessing money leaving bonds, and I do believe that money will make its way into stocks eventually. 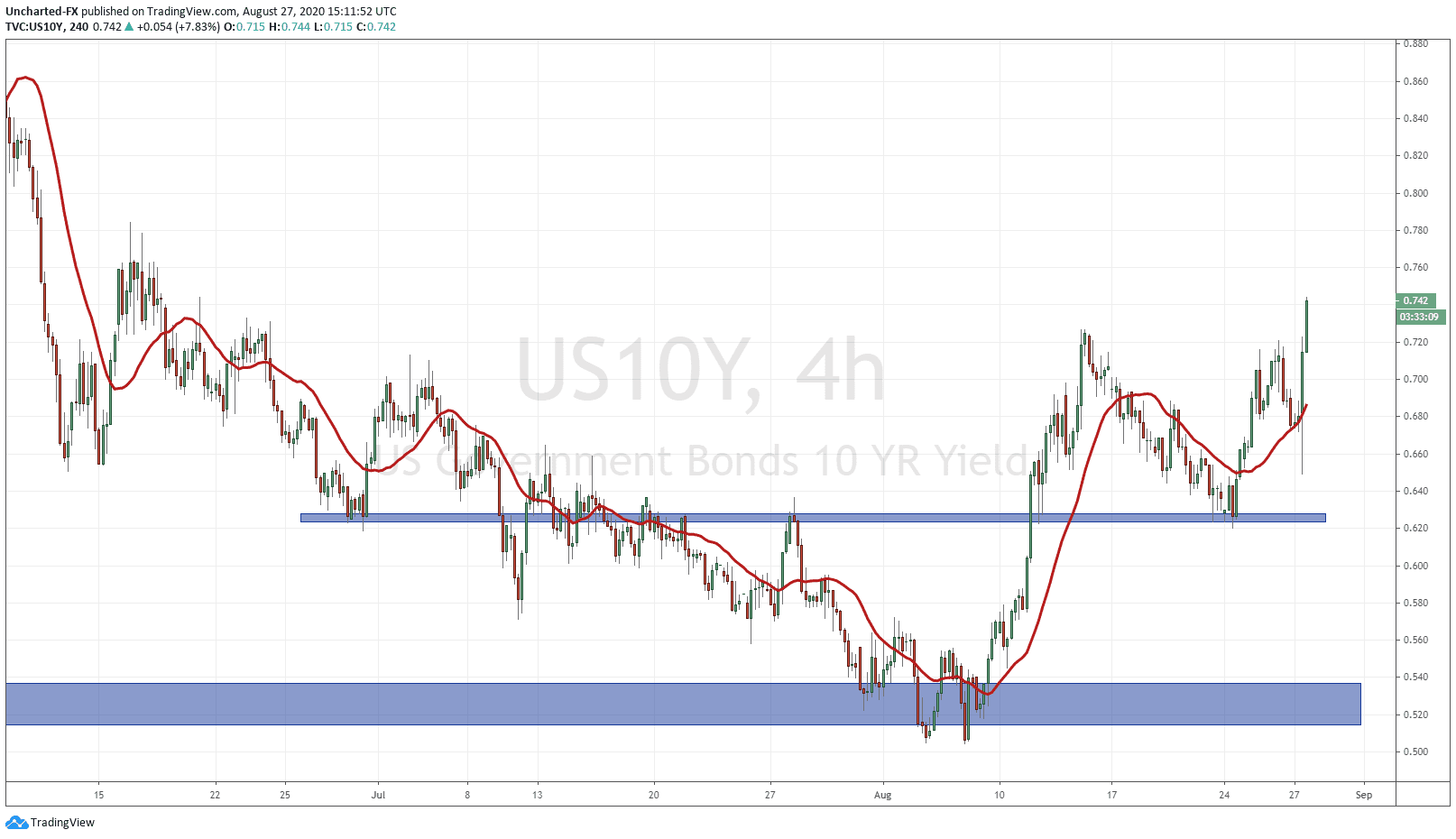 Onto the Powell announcement. Well it was what we all expected. The Fed will keep interest rates low for a very long time. In my opinion, with all the debt accumulated by the government and citizens in response to the pandemic, interest rates can never go up. There is a higher chance we go into the negative territory like Japan, Europe and Switzerland to name a few, than seeing an interest rate hike going forward.

The statement reflected on the Fed’s dual mandate on maximizing employment and stable prices. The Fed has said they are adopting an “average inflation target” and also recognize the benefit for a strong labour market.

The Fed’s strategy retains 2% annual growth of inflation as a target but the Fed said it “seeks to achieve inflation that averages 2% over time.”

“Following periods when inflation has been running persistently below 2%, appropriate monetary policy will likely aim to achieve inflation moderately above 2% for some time,” the new policy says.

“It is hard to overstate the benefits of sustaining a strong labor market, a key national goal,” Powell said in his prepared remarks discussing the policy shift.

In the past, a strong labour market meant that inflation was on the rise which meant that central banks were likely to start RAISING interest rates to prevent the economy from over heating. Not anymore. The Fed now believes:

“a robust job market can be sustained without causing an outbreak in inflation.”

We are right to question the tools left in the Fed’s toolbox. Are there any left? Our analysis since equity markets began to fall back in February remains the same: The Fed will do everything possible to keep markets propped up. Their actions mean the only place to obtain REAL yield will be the stock markets. They are slowly morphing into the strongest institution in human history, even surpassing the church during the inquisition. The Fed will eventually become the buyers of last resort. Their incursion into the corporate bond markets is just the beginning. Many are now predicting an eventual move into equities like the European Central Bank, the Bank of Japan, and the Swiss National Bank.

My thoughts on inflation are in line with classical economics. Many are wondering where the inflation is today with all the money being printed. Yes, assets are going up, but I think this has to do with a hunt for yield. Yes, prices for some food is going up, but many are attributing this to the shortages and supply chain issues. The one big factor for inflation that many people overlook : money velocity.

Inflation will show its face once money velocity returns. This is why inflation is seen as more of a psychological phenomenon, because making people spend money is easier said than done. Central bankers release inflation targets as a way to create a self fulfilling prophecy. If the central bank says they are expecting inflation at 2% per year, someone who was thinking of purchasing things later might not wait. They would rather make that purchase now than pay the extra 2%. These purchases cumulatively then create the 2% inflation.

By the way, governments love inflation. Why? Because inflation is taxation. Higher prices means more tax revenue from the sales tax and property tax etc. At a time when governments are broke, they will encourage central banks to ramp up inflation. The reason why deflation, or cheaper prices is not sought out is because government have not found a way to tax deflation. Perhaps deflation can be a thing once more green taxes are imposed (km driven tax, empty room tax etc). Finally, inflation just gives a sense that the economy is improving while deflation makes it seem like the economy is stalling or falling.

The most extreme case is hyperinflation. The key ingredient here is a confidence crisis in governments, central banks, and hence the fiat currency too. If you look at situations such as Weimar Germany, Zimbabwe, Venezuela, Argentina etc, people lost confidence in the governments and central banks policies, that they did not want to hold onto the currency. This lead to people SPENDING money right when they received it because they knew it would be worth less tomorrow. This causes rampant inflation known as hyperinflation, and it then becomes very difficult to bring confidence back, unless there’s some sort of regime change or a financial reset.

Going back to getting people to spend money…unfortunately this is where negative interest rates and digital currency comes into play. The European Central Bank and the Bank of Japan tried to create inflation by going into negative interest rates. The idea was that banks would lend more and citizens would spend more because they would have to pay the banks for keeping money in a savings account. What happened was the opposite: people have begun saving more. In some cases, removing the cash from the banks and keeping it at home.

Central banks believe negative rates have failed because they have not cut rates deep into the negative enough. The solution? Digital currency. We are seeing cash already being attacked as some businesses are not accepting cash for fear of Covid contamination. With a digital currency in place, everyone will be forced to keep their money in banks. Once negative interest rates come into play, you will have to pay the bank monthly. People who are saving large amounts of money will be punished by paying a large amount per month due to negative interest rates. The goal here though is to force people to spend money rather than save. Create that money velocity which will cause inflation and boost the economy. This is the end game, and it could be coming much quicker than we think.