How a carnival barker became a truth-teller: Jim Cramer just called bullshit on the “V-shaped Recovery”

Over the years – Jim Cramer (65) – the bombastic host of Mad Money on CNBC – has been a constant source of amusement.

A former Coca-Cola salesman and hedge fund manager, his shtick is to prowl in front of a bank of ticker symbols saying stuff like, ““These will be fabulous investments and will make millions of people rich!”

Cramer does not have a track record as a successful stock-picker. Between 2001 and 2016, his charitable trust significantly underperformed the S&P 500.

In 2009 he accused Barack Obama of causing “great wealth destruction”. Later that year, Cramer was taken down by comedian Jon Stewart in an excruciating interview that went viral.

“I realized Stewart was on a mission to make me look like a clown,” recalled Cramer, “I didn’t defend myself because I wasn’t prepared. The national media said I got crushed, which I did, they made me into a buffoon.”

Since the 2020 pandemic arrived, Cramer has starting talking and acting like a mature, rational human being.

This may be a function of age. Career thugs typically “age-out” of violent crime as they move into their 50s and 60s.

“Neuroscience suggests that the parts of the brain that govern risk and reward are not fully developed until age 25, after which lawbreaking drops off,” states The Marshall Project.

Cramer’s crimes-against-gullible-investors have recently tapered off and been replaced with more ethically-nuanced commentary.

“I’m never going to tell you I don’t care about the stock market,” stated Cramer on April 6, 2020 as coronavirus cases in the U.S. soared, “But for me, it’s a real sideshow. We’ve got to save people’s lives.”

“It’s great to get the economy moving again,” continued Cramer, “But you can’t create demand if you’re afraid of getting sick.”

Everybody who is wealthy has to do something. We talk about sacrifice, and it’s like, ‘Hey, I do sacrifice, I pay my taxes.’ Screw that. You’re a rich idiot.” – Jim Cramer, April 2020.

“Fauci is God to me,” added Cramer about Dr. Anthony Fauci of the National Institute of Health, “I do whatever he says.”

Watching people die on TV, or losing loved ones, will tend to soften the heart. As the corona virus spread over the world, Cramer’s daughter was teaching in hard-hit locked-down Spain – and that caused him anxiety.

Cramer latest move is even more surprising because it is destructive to his brand.

Yesterday, Cramer called “bullshit” on the idea that the U.S. economy is staging a V-shaped recovery after the S&P 500 crossed closed at an all-time high.

“We’ve had a magnificent V-shaped recovery in the stock market, but the stock market’s not a great reflection of the broader economy anymore,” Cramer said, “The actual economy’s in precarious shape, especially now that the government’s stimulus package has run out and Congress went home for the summer.”

The S&P 500 joins the tech-heavy Nasdaq Composite, which has been placing new highs since late June, 2020.

“In a V-shaped recovery, the Dow Jones Industrial Average would be hitting new highs, but this move’s been led by the Nasdaq and the S&P,” Cramer explained, “Look at the stocks that have brought us to these levels — they’re not the recovery plays.”

“The S&P 500′s not making new highs because of the industrials or the apparel stocks or retail or the banks, classic recovery stocks,” Cramer added. “No. This move’s been fueled by the biggest story of the Covid recession: digitization.”

“When you talk about digitizing the economy – do you know what that’s short-hand for? Cut out the fat! With the fat being – alas – the people. When you can’t afford to hire people you bring in data and software companies. The winners in this economy are the companies that are most divorced from the underlying economy.”

“Jobs are fully back for the highest wage earners, but fewer than half the jobs lost this spring have returned for those making less than $20 an hour,” reports The Washington Post, “Though recessions almost always hit lower-wage workers the hardest, the pandemic is causing especially large gaps between rich and poor.” 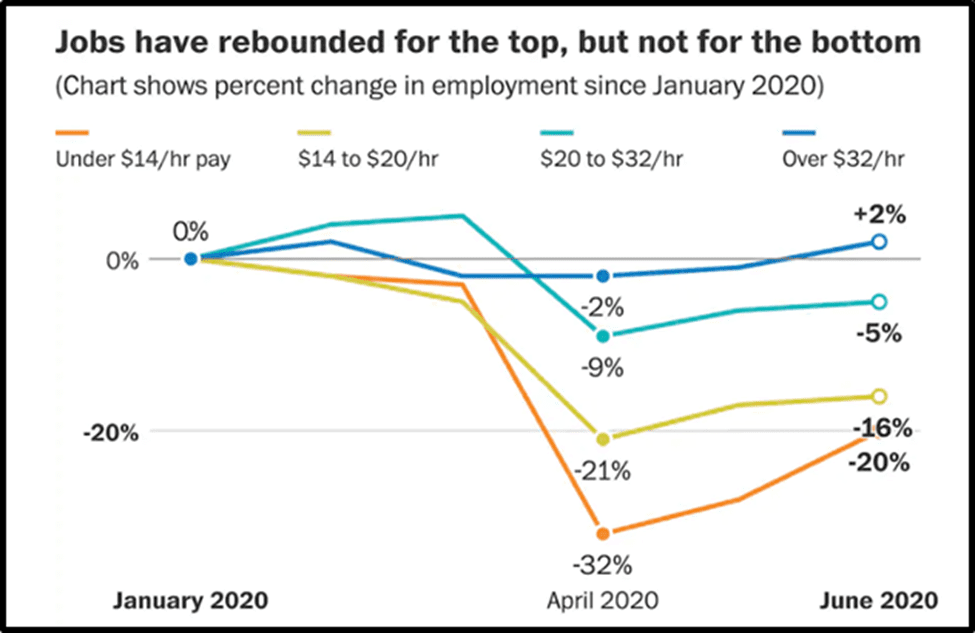 The comment section below the August 18, 2020 Mad Money video revealed that many viewers where hostile to Cramer’s transformation.

“I have advise for you Cramer,” commented R7, “Go to church and confess: I have pushed and influenced my followers to believe that the bull market made fundamental sense and I failed to understand the consequences of my sins.”

“Change of tune since the ‘Obama recovery’ there Jim,” commented Ballistic Bob, “That’s what you said it was for 8 years straight even though we had a net loss of 20 million jobs. Jim is Satan’s little friend.”

“What exactly are people supposed to put their money into?” asked Steve Parkin, “Sitting on dollars under your mattress is as dangerous as buying stocks. I think many of us have no freakin’ idea what to do.”

Here’s one thing you could do: buy gold.

“Warren Buffett recently sold about $13 billion of stocks when one would expect Buffett, a stalwart believer in the U.S. economy, to go on a buying spree,” recounts Bloomberg, “It’s not as if Berkshire needs the cash — it had a mind-boggling $147 billion as of June, 2020”.

If – as Cramer, Guistra and Buffett suggest – the U.S. economy is a house of cards – purchasing gold stocks is one way to short it.

“I’m convinced we’re in the very early innings of a powerful bull phase [in gold], one that will play out over a period of years,” states Equity Guru’s Greg Nolan on August 6, 2020 in “A Guru (client-list) ExplorerCo round-up – DEFN.V, EAS.V, FG.V, FRE.V, GLM.C, GSK.C, NSR.T.” 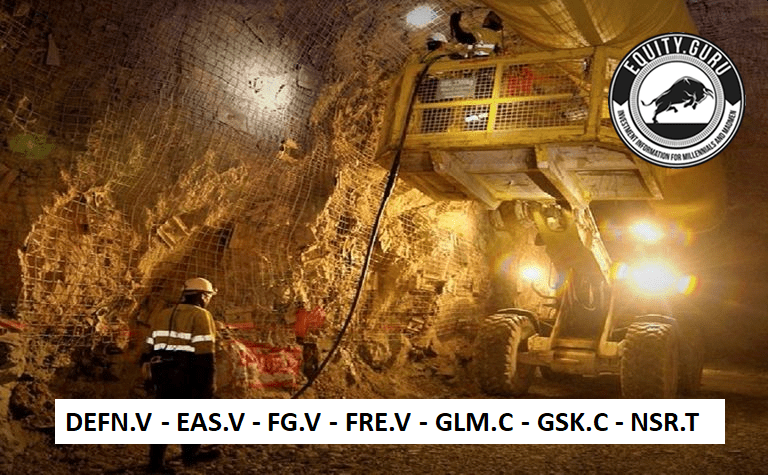 “The S&P’s new highs are a tail told by an idiot, full of sound and fury, signifying nothing about the hardship of millions of people on food stamps, or the millions about to be fired from service jobs, or the homeless, or the people who are just huddled at home waiting for the vaccine, which currently feels a lot like waiting for Godot.” – Jim Cramer – August 18, 2020.

The ruthless carnival barker has become an empathic truth-teller.