The 2000-meter diamond drill program is testing the mineralization potential of several gold targets occurring within an east-west trending corridor.

Nexus confirms that “the first round of drilling in the St. Pauls Bay area was designed to test depth extensions of surface rock sampling conducted by the company in June and November of 2019, and to test historic drill intercepts encountered by the properties previous owners in 2001-2005.”

15 years ago, a drill program along this corridor returned:

The above results show decent grades over narrow widths.

The 2020 summer results at the McKenzie project show more of the same: 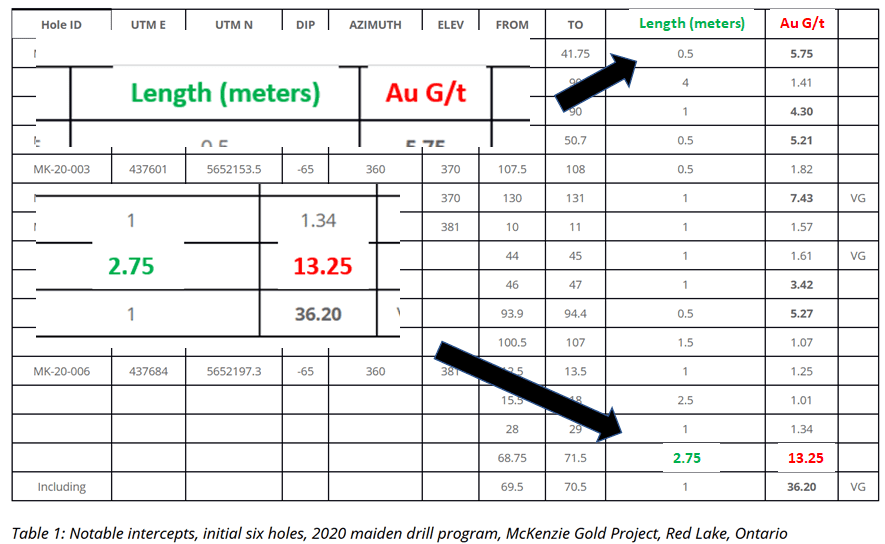 “These initial holes produced similar results to historical drilling in the same area,” confirms President and CEO, Alex Klenman, “i.e. narrow intercepts of 1 to 7 g/t gold over various lengths between 1 and 4 meters.”

“Holes 5 and 6 began showing greater concentrations of these types of intercepts, culminating with the best result of 13 grams over almost 3 meters,” continued Klenman, “Results were getting more interesting the further we got into the drill program, so naturally we’re eager to see what the next batch of assays reveal.”

“Our efforts are to now try and define the nature and extent of this mineralization,” added VP of Exploration, Warren Robb, “and to determine how these structures relate to the contact with the Dome stock and the Balmer Assemblage volcanics.” 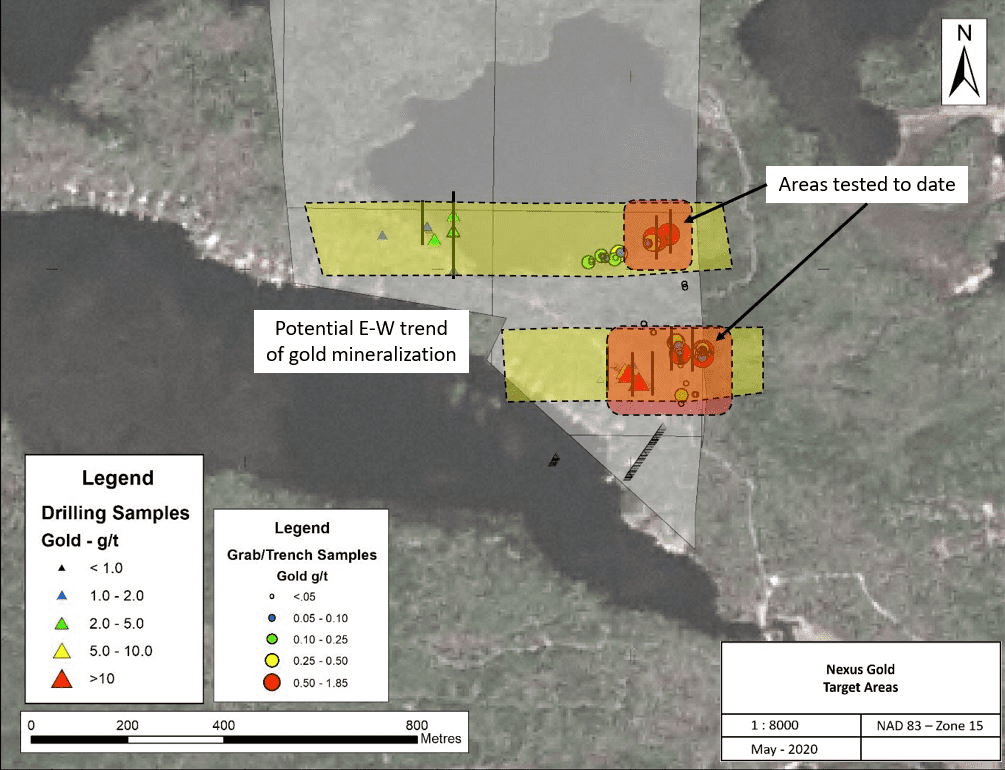 In December, 2019, we pointed out that, “The U.S. government owes about $23 trillion (a lot of it to China), and is plunging another $1 trillion in debt every year”. We claimed that – despite all the borrowed money sloshing about the system – “America’s economic engine is sick”.

“There will be a devaluation of fiat currency, particularly the U.S. dollar,” we wrote in 2019, “gold may be a powerful defensive strategy to preserve and grow existing wealth.  Typically, if there is a flight to gold, the gold juniors (GDXJ.NYSE) will out-perform bullion and big-cap miners”.

In 2020, the U.S gov. has borrowed another $7 trillion, the U.S. dollar has weakened further, the flight to gold is now a stampede and many gold juniors have experienced sharp gains in share price.

Nexus has performed well in our predicted scenario: 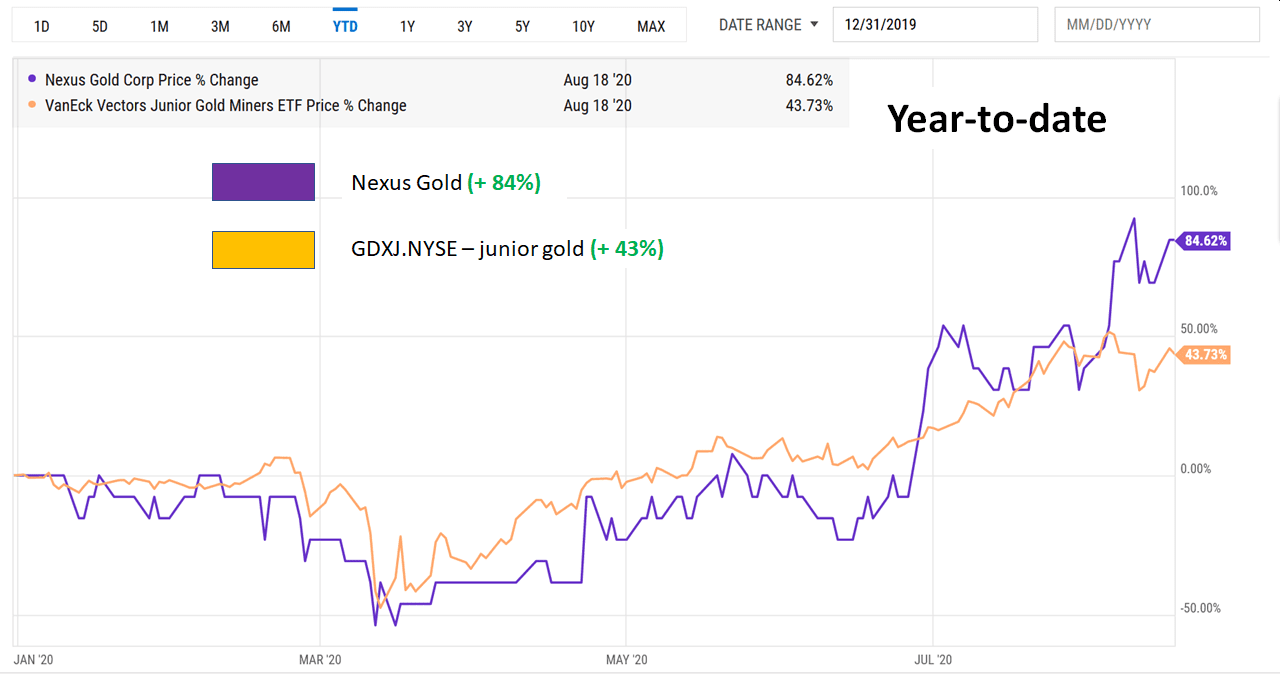 The Ontario gold concession is not Nexus’ only iron in the fire.

We believe Burkina Faso is in a good position to take over the mantle of Africa’s next hot gold producer.

Endeavour Mining (EDV.T) – a $6 billion gold miner – is operating the Houndé and and Karma gold mines in Burkina Faso. EDV’s 2019 Burkina Faso revenues were about $600 million. The Karma mine is right in the same neighbourhood.

“Warren Robb, Nexus VP of Exploration had his sights set on Dakouli from the get-go,” states Equity Guru’s Greg Nolan, “For those unfamiliar with Robb, he was Roxgold’s chief geologist in 2012 where he supervised exploration on the Bissa West and Yaramoko gold projects”. 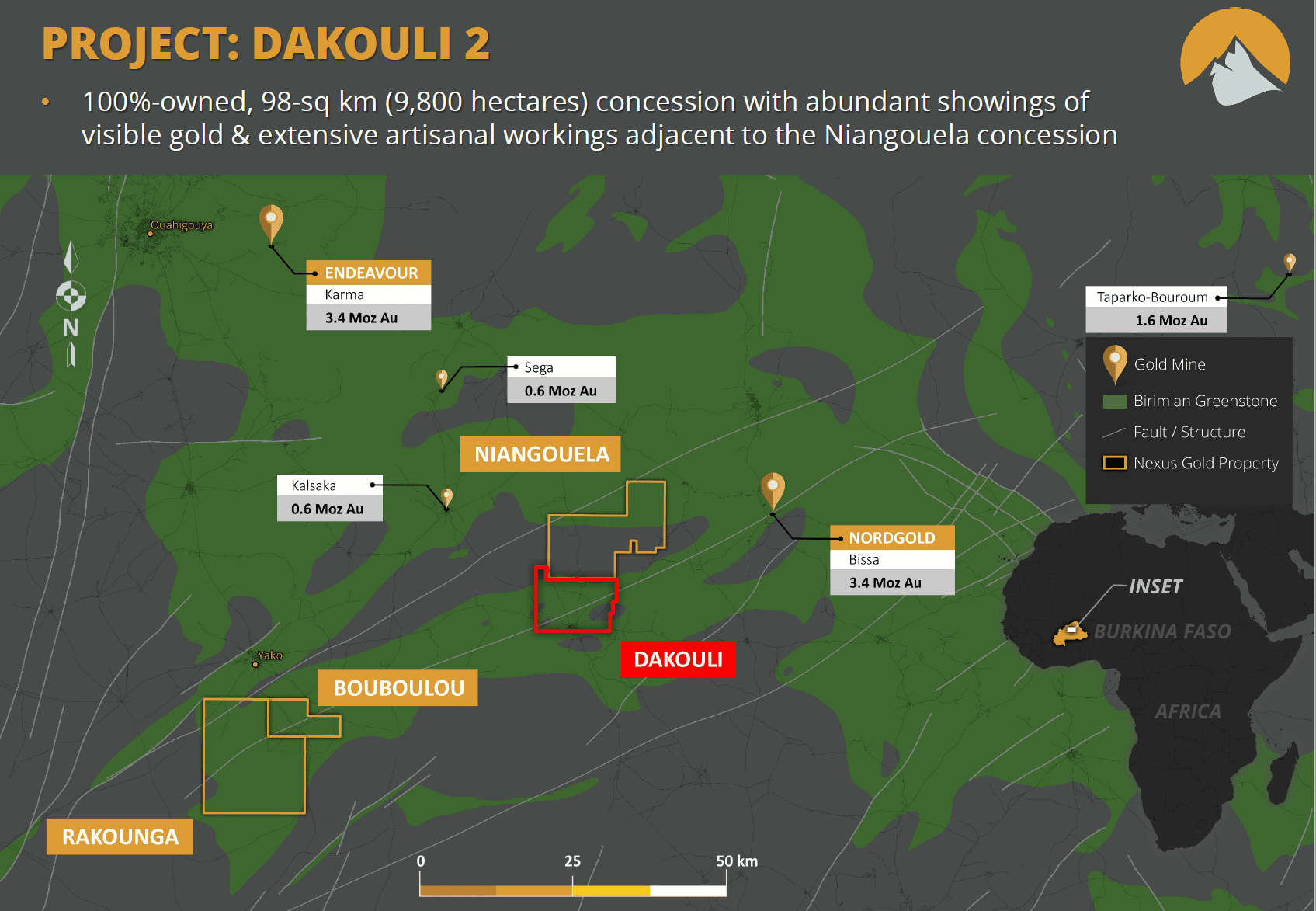 The Ontario drill results published on August 18, 2020 are encouraging. The market will now be looking for consistency in intercept widths and grades.