On August 11, 2020 Revive Therapeutics (RVV.C) announced that it has received the first set of orally dissolvable thin film strips initially to be used to deliver psilocybin and subsequently additional psychedelic-derived medicines.

At a recent staff meeting, Equity Guru principal Chris Parry revealed that he has eaten psilocybin mushrooms multiple times in this summer, and the experiences “made it very clear what was important, and what was not important”.

The jury is still out on the therapeutic benefits of “magic mushrooms” – but a steady flow of positive clinical studies and anecdotal field reports has begun to move the regulatory needle.

“Four terminally ill Canadians have won the right to take psychedelic drugs to treat end-of-life anxiety and distress,” reports the UK’s Sky News on August 10, 2020, “They will be allowed to take the hallucinogenic drug psilocybin, derived from magic mushrooms.”

RVV has identified tannin-chitosan composite of orally dissolvable thin films as the lead candidate for the development of a unique delivery platform for therapeutic doses (1-20mg) of psilocybin into the oral cavity. 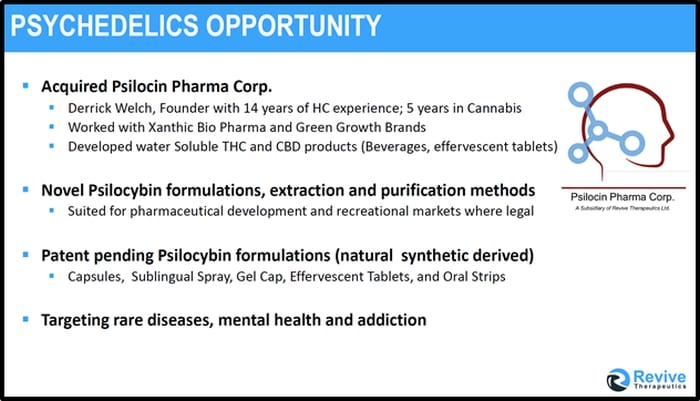 RVV’s technology aims to deliver both synthetic and natural extract of psilocybin in a potential number of ways such as orally dissolvable thin films, topical gels, creams or ointments, oral or transdermal patches, oral dosages and foams.

The delivery technology is a natural, non-toxic, biodegradable and biocompatible composite.  It has a rapid onset of action and controlled or sustained release potential capabilities and may allow combining multiple extracts from mushrooms in one formulation.

Revive is not a one-trick pony – it has a robust pipe-line of development products. 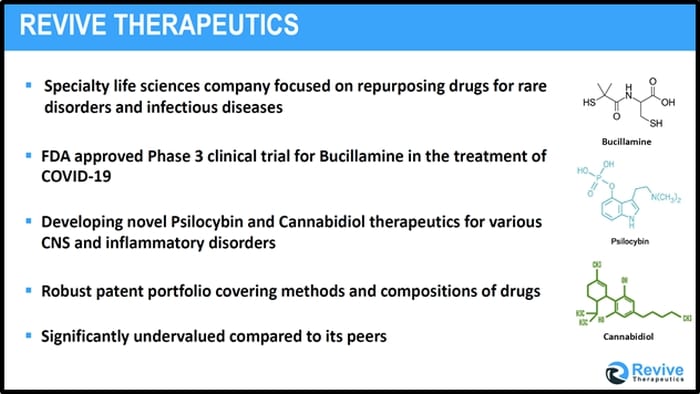 “Formerly dismissed-by-many pharmaceutical company Revive Therapeutics (RVV.C) jumped a whopping 68% Friday upon revealing it has been granted approval to move forward with phase 3 clinical trials on the use of its Bucillamine medication as a potential treatment for patients with mild to moderate COVID-19,” reported Equity Guru’s Chris Parry on July 27, 2020.

“With the FDA approval of the Phase 3 clinical study to evaluate Bucillamine in the treatment of patients with mild-moderate COVID-19, our team and partners are working diligently to align our resources and expertise that will fast-track the Phase 3 study,” reported CEO Frank on August 5, 2020. 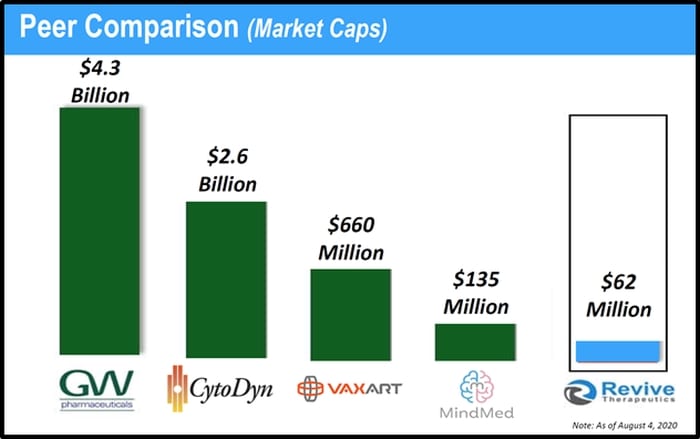 One of the Canadian patients entering the psilocybin trial, Thomas Hartle, from Saskatoon has stage 4 colon cancer.  He told the Canadian government “there isn’t anything available that can treat existential dread”.

A study by NYU Langone Health revealed that 70% of psilocybin users reported positive life changes after going through the treatment.