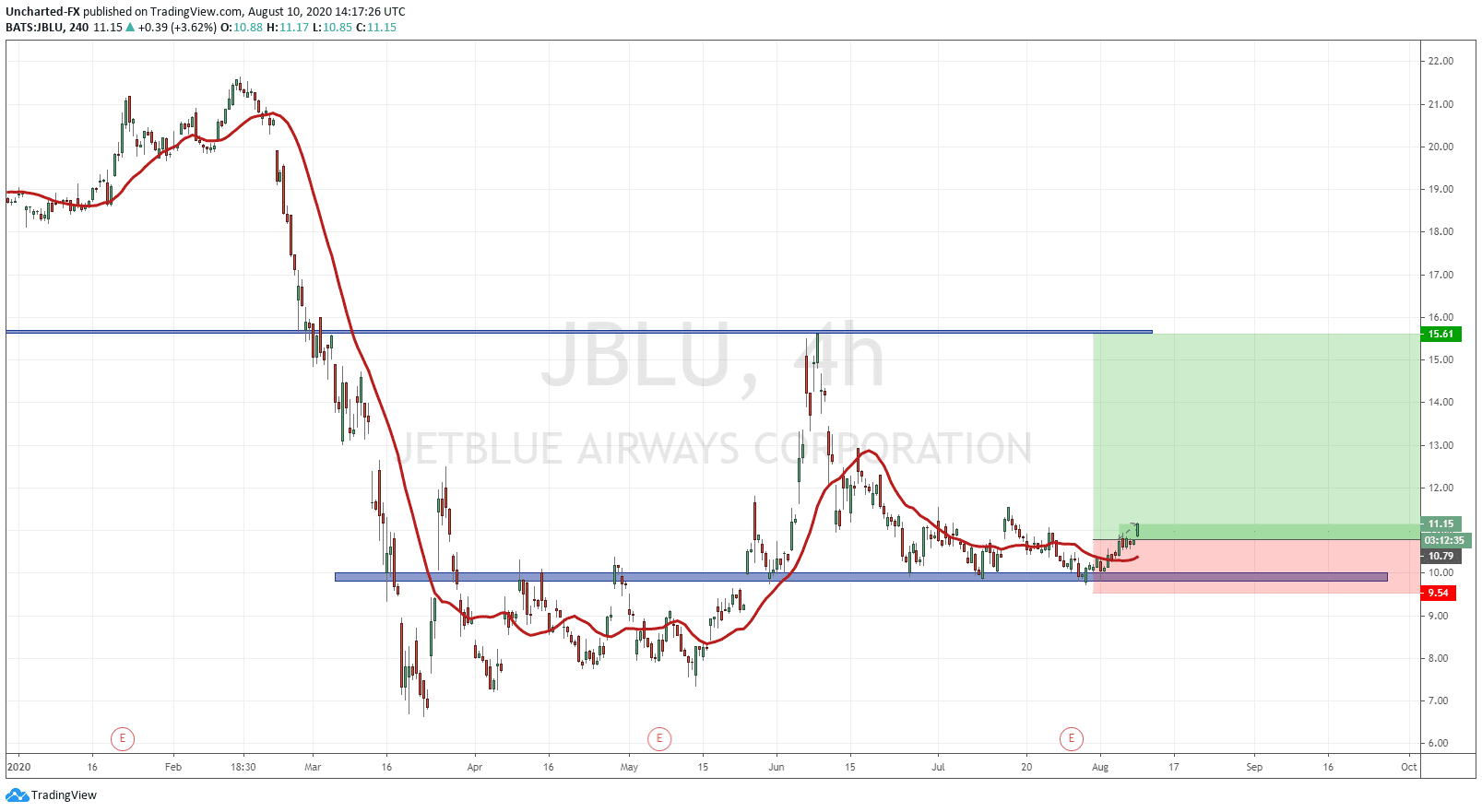 We have been saying that the only thing keeping this market up is cheap money, and the promise of more cheap money, which causes investors and market participants to go into stocks for real yield. We have been talking about the new stimulus bill being a catalyst. On Friday, we had conflicting headlines stating the talks between the Democrats and the Republicans broke down, pressuring the markets. But then, near the end of the day, we had a headline stating the two sides have continued to talk trying to workout their differences. Well, over the weekend, President Trump signed an executive order which will provide $400 in enhanced unemployment benefits plus other expanded benefits. We were talking about this on the weekend over on the Equity Guru Discord channel: expect a green day on Monday on a stimulus rally. An interesting comment made by observers is the treatment of politicians when it comes to bailing out corporations vs main street. Corporations and banks got their money real quick, whereas main street packages took some time as politics played a large part. Just bringing this up because it factors in today’s trade idea: Jet Blue.

Not very many people are bullish the airlines. We saw Warren Buffett close his Delta Airlines positions, and airlines reported their worst earnings ever. I argued that all the bad news and data has already been priced in, hence why when we got earnings out in May and then July, the stocks did not tank. Market was expecting it and was priced in. Our readers will recall our first Jet Blue trade idea, and other airlines way back in May, with most of them hitting our first take profit levels just a few weeks after. The same fundamentals remain, but this time we do have some operating domestic flights. The big thing keeping airline stocks propped is the promise of MORE bail outs and relief/stimulus for the airline industry.

On the technical side, there are a lot of confluences on the Jet Blue chart. Firstly, this trade idea was mentioned and triggered last week over on the Discord channel. However, it is still valid and presents another entry on this candle breakout today. Notice the major support area that Jet Blue held at 10.00 for about two months. This support zone was the same one we worked with back in May. It also coincides with the FIRST higher low in Jet Blue’s uptrend which we made back on May 29th/2020 with the retest of the breakout zone. According to simple market structure, we are in an uptrend as long as we remain above the higher low!

Finally, the risk vs reward for Jet Blue is spectacular. We want to nestle our stop loss below the 10.00 support zone. I placed my stop below the daily candle which retested this support level and bounced up. Targeting previous highs at around 15.65 gives us a risk reward of 1:3.8 which is great on its own. However, I would argue that price would actually break higher from here to confirm a SECOND higher low in the uptrend which would take us to around the 17.00 zone increasing our reward ratio. What I will do is assess how the candle reacts at 15.65. I usually take multiple positions, so I will close one at 15.65 and then hold the remaining for a potential breakout move to 17.00 as the candles dictate. 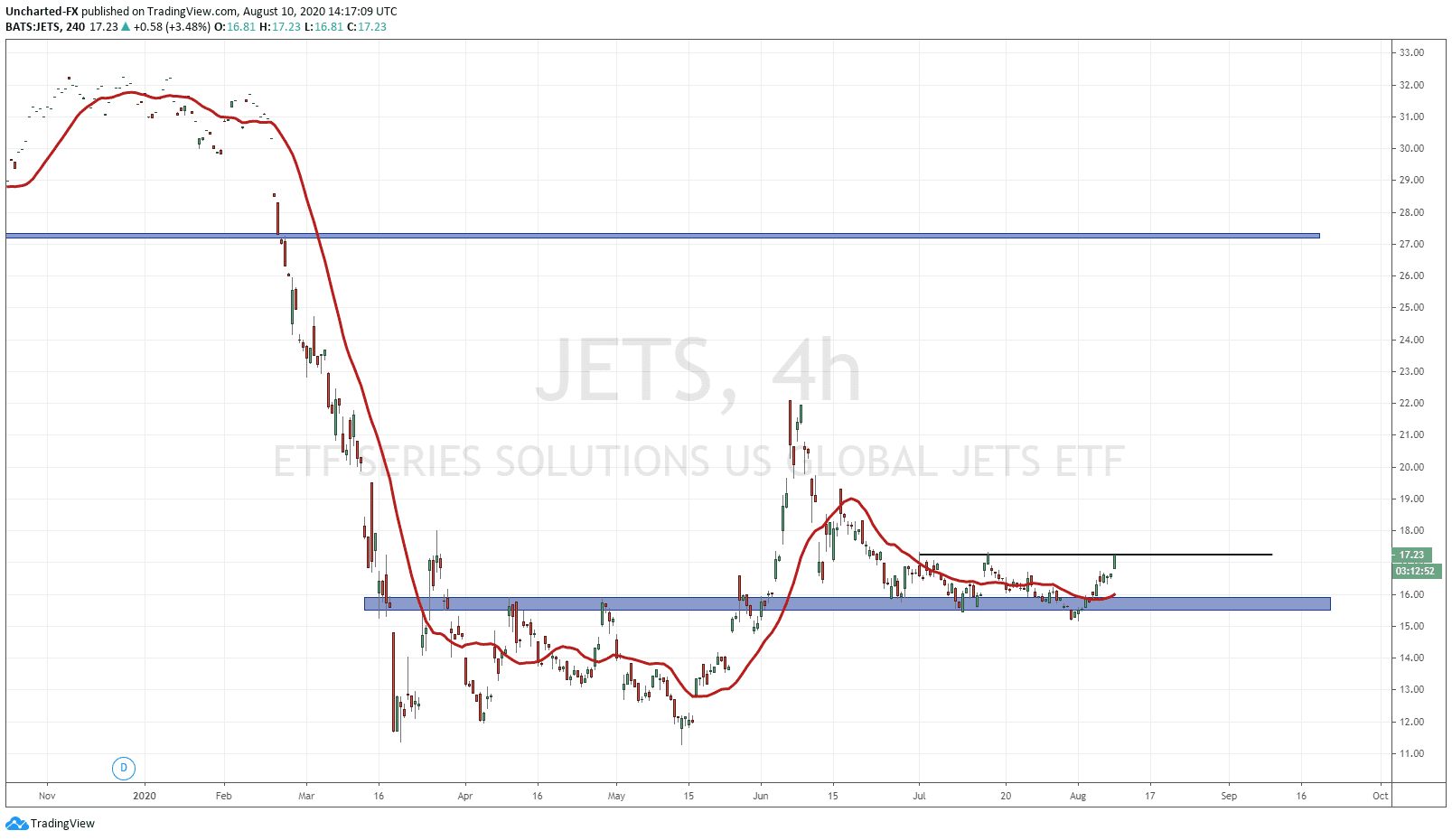 The final confluence, which is a trade idea on its own, is the JETS ETF. The chart is naturally very similar to the chart of Jet Blue and other airlines. We have bounced at a major support zone, and are in the process of breaking out above 17.30. Ideally, see a pullback before breaking out which creates our inverse head and shoulders pattern!