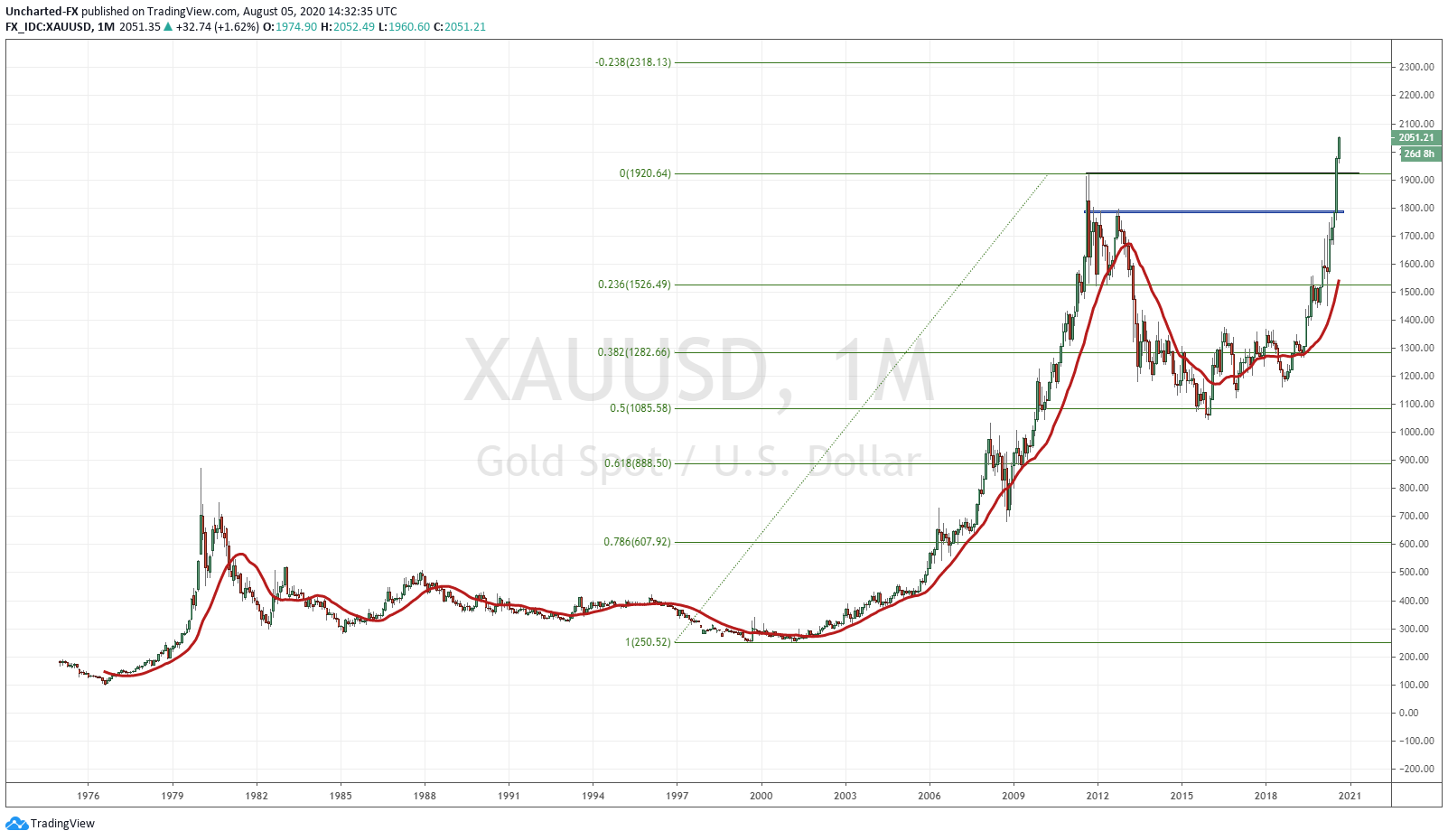 Gold did it! We are now over $2000 an ounce against the US Dollar. We here at Equity Guru have been bullish on Gold since the weekly chart break out last year, and we were telling people at the past Vancouver Resource Investment Conference that MORE higher lows are coming which will eventually take us to all time new highs. We said this because Gold is the confidence crisis asset. You run into Gold when there is a confidence crisis in governments (check), in central banks (check) and the fiat money (check).

Ray Dalio has not only said Gold is now the best CURRENCY, but also the best risk off/safety asset that will be replacing bonds. With bonds yielding practically nothing it does not make sense to hold them for yield. It only makes sense TRADING bonds for capital appreciation betting on negative rates (hence the bonds you own now will be worth more when new bonds issued yield negative nominal rates). In negative rates both Gold and Bond won’t provide a yield. BUT Gold has a chance to provide you with a return per month since the price can move well over 3% a month, whereas bonds tend to move slower.

Gold, through the lens of classical economics theory, is a way to gauge the health of a currency. When Gold is making all time highs against fiat currencies, it means those currencies are going to be inflated. We saw this when Gold started making all time new highs against plenty of currencies (Loonie, Aussie, Pound, Euro, Yen etc) and then came covid which saw central banks of those countries cuts rates close to 0 (negative already for Japan and the EU), and saw more money printing. The US took some time because it is the reserve currency so it receives artificial demand. In previous posts, I have said the Fed will have to kill the US Dollar. I thought this would occur the opposite way though, with the Dollar spiking higher which would then see a new type of Plaza Accord where countries would want a weaker Dollar and a new type of system would be built. This can still play out. Brent Johnson over at Santiago Capital who has coined the Dollar milkshake theory believes this can still come. It would take a large black swan/ geopolitical event to cause a rush into Dollars and would consequently cause stock markets to fall.

In terms of inflation, governments love it because it is taxation. The more something costs, the more you pay in sales tax, property tax etc. Governments are committed to keep things inflated, and they will kill the currencies like they currently are, to do so. A weaker currency means it takes more of that weak currency to buy something, which gives a wealth effect. This is how they will attempt to keep real estate propped in most nations.

This news just came out today, and is now another BULLISH case for Gold, Silver and other assets (including stocks). The Federal Reserve is expected to make a major announcement on ramping up inflation. To be honest, take a look at the US Dollar and maybe their actions are already beginning.

Going back to the Gold chart now what is next? Since we are in uncharted territory, this is where fibonacci comes into play. What I have done is fibbed the entire monthly move and came up with two fib retracement targets. My next target is 2318 as long as we remain above 1923. If you remember, Goldman Sachs also came out with a target at 2300 Gold in the next 12 months…I would say they have used the same fibonacci I have.

In terms of how to play this move, we have been saying the junior miner bull market is just beginning! We are in the early stages which can be a bull market lasting years (chart on the previous linked post). We have added to our GDX position, and writer Lukas Kane just yesterday, posted an article on the GDX and how to make money on the declining US Dollar. 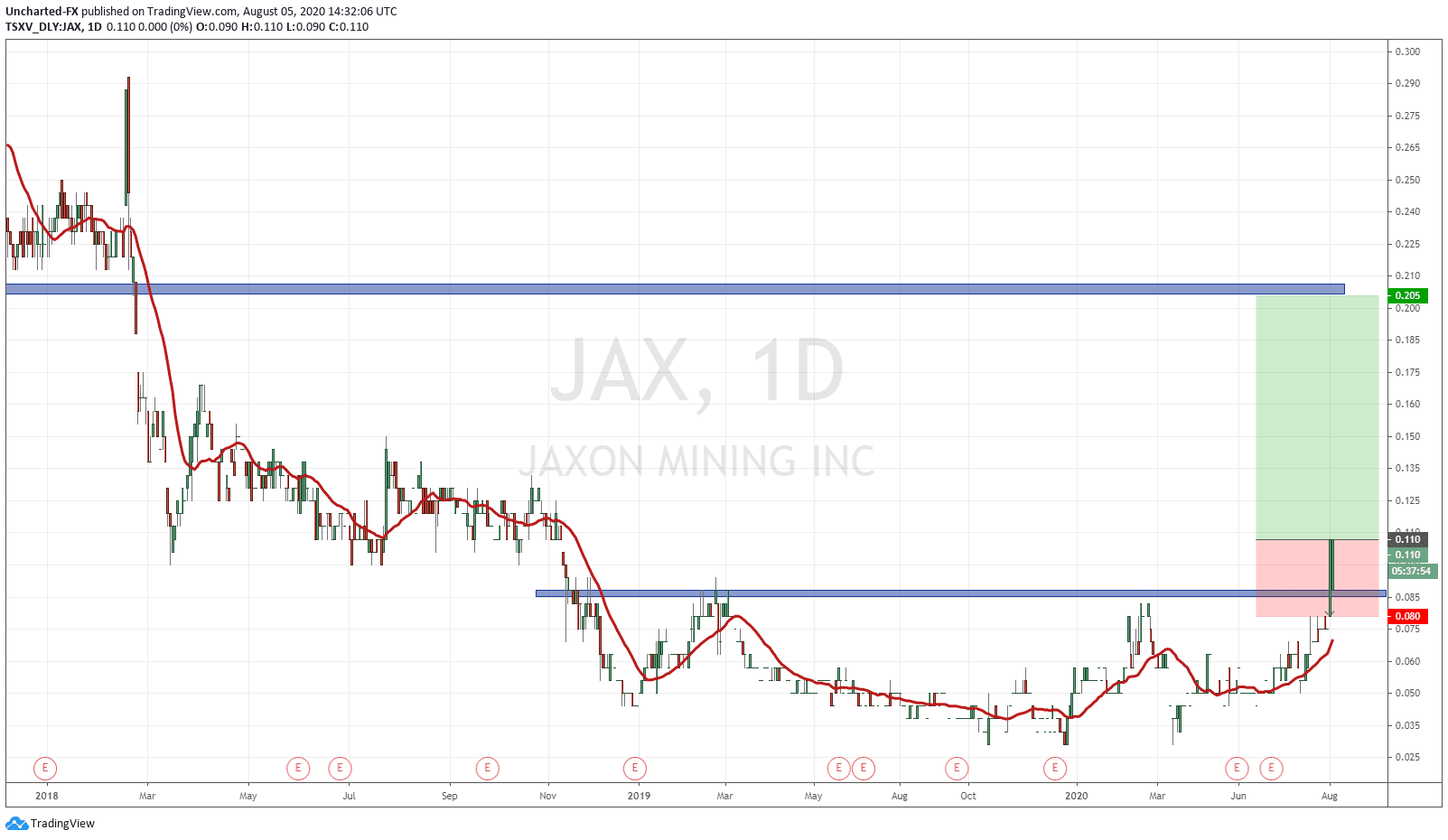 I said that I would cover more junior miner stock charts. So far our picks and trades have been immense. In the past, I spoke about the chart of Jaxon Mining (JAX.V), also covered in Greg Nolan’s Round up. The type of basing pattern we have used to trade things such as Gold, Silver, GDX, GDXJ, Pure Gold Mining, Impact Silver, and East Asia Minerals. Similar market structure patterns. JAX also has a head and shoulders pattern which did confirm the break yesterday! The candle was strong, and as you can see today, so far the retest of that breakout zone is being held and is seeing buyers step in.

I want to say first of all to be careful because the average volume is low at around 60,000 shares traded BUT today we currently have 142,910 shares traded. The way to play this would be to enter on the breakout and place our stop loss below the breakout zone. I generally like to place the stop below the breakout candle, but when you have a large breakout candle like we have now, you can place it 3/4ths of the way. For this example, I am using the bottom of the candle, and am targeting the next resistance/flip zone at 0.205…a nice 1:3 risk vs reward set up!

The breakout in the stock came from news regarding assays and securing 100% control of Red Springs:

The surface prospecting and rock outcrops chip or grab sampling program has concluded at the Northwest Cirque area at Red Springs AOI. 24 rock samples (Table 1) were collected from either outcrops, sub-outcrops or rocks flow at Northwest Cirque and its down slope valley (Figure 1, Table 1). The first batch of rock samples has been delivered to MSALABS in Langley, B.C., Canada, for expedited assaying and other rock analysis.

Mr. John King Burns, Chairman, and CEO commented, “We are increasingly confident in our geological understanding of the orogeny and scope of the systems we are exploring at Hazelton. Red Springs represents a major porphyry system marked by an extensive tourmaline breccia occurrence and hydrothermal pebble event. We are pleased to have located the new diorite porphyries and contact zone between diorite and hornfels. These new observations, once added to our geological model, will be applied to the design of the drill program to test the Red Springs porphyry system. Drilling will determine the extent and grades of Cu, Au, Ag mineralization indicated by surface samples but carried deeper in the system. Each drill hole will vector in on the structural boundaries, and the IP and magnetic anomalies.”

“Results from the Phase One mapping, geophysical and geochemical survey programs will be released as they become available. Phase One results will complete the information we need to select the drill targets planned for 2020 Phase Two and field programs for 2021.”