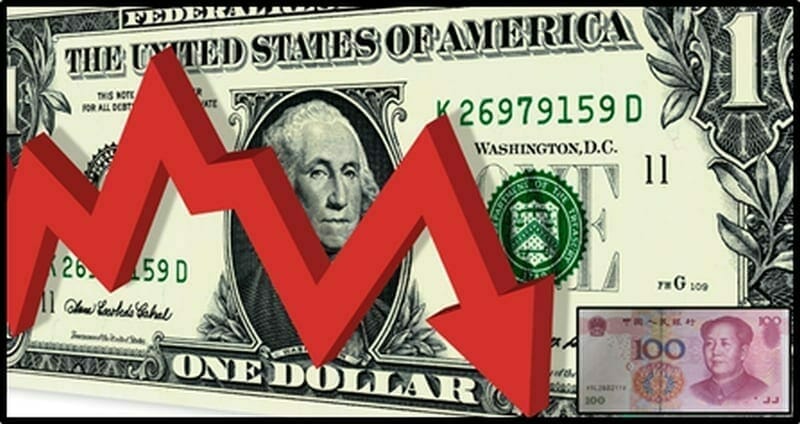 Yes – he is distasteful to most college-educated people – but when you launch your Presidential campaign by announcing that “Mexicans are rapists” – no one can accuse you of being timid.

Mr. Trump is a self-confessed groper, the CEO of a fake charity, a liar who promotes violence, a tax cheat a white supremacist and a corona-virus denier – but the man does not lack nerve.

Currently, Trump’s most useful function is to serve as a metaphor – and proxy – for the rapid degradation of the U.S. dollar.

As America’s reputation on the world stage declines, the U.S. dollar is losing its mojo. 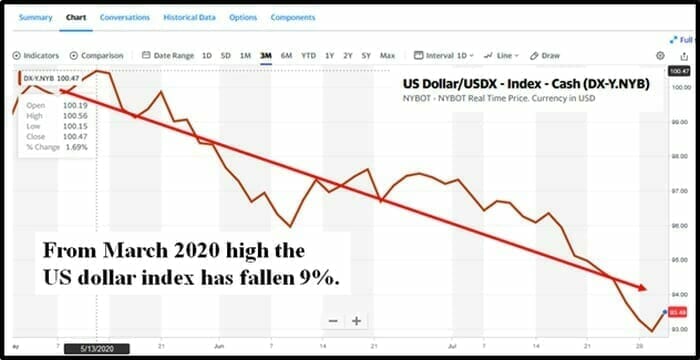 According to the International Monetary Fund (IMF) more than 62% of all foreign bank reserves are currently held in U.S. dollars. Most of these reserves are in cash or U.S bonds (like U.S. Treasuries).

However, things are changing, because the U.S. is now completely, utterly, stone cold broke.

“The American Dream” may be conceptually intact, but fewer people have access to it.

In 1990, the US ranked 6th in the world for its levels of education and health. It now ranks 27th.  Sixty percent of Americans think evolution is fake news. Only 33% of them can pass the US citizenship test (sample question: “what ocean borders the west coast?”).

When you buy U.S. dollars you are investing in the political stability and economic strength of the U.S.

“Dumb and broke” does not scream “stable” or “strong”.

In August 2020 there are numerous global financial trends that threaten the U.S. dollar.

China is Africa’s biggest trading partner, and China is promoting the use of the Chinese currency on the African continent.

“We expect at least $100 billion in Sino-African trade to be settled in the renminbi (RMB) by 2021,” stated Standard Bank.

An estimated 75,000 Chinese companies are using the RMB in international transactions.

India is now using to use gold to buy oil from Iran. China is also doing deals with Iran in their own currency.

Saudi Arabia and China are collaborating on a large new oil refinery in Saudi Arabia. How long will Saudi Arabia use U.S. dollars if China is their biggest customer?

The UN is calling for “a new global reserve system that no longer relies on the U.S. dollar as the single major reserve currency.” The IMF is also pushing for a new global currency.

“As I said a decade ago, the day would come that the Fed would be the buyer of US government debt of last resort and ultimately, the only buyer,” continued Guistra, “I don’t think we have seen the beginning of defaults and insolvencies in corporate America yet. The idea that we will have a V-shaped recovery is fantasy.

I predict the Fed balance sheet will be $10 trillion by year end. The Fed will never, ever be able to normalize interest rates and will never unwind its bloated balance sheet. That is a mathematical certainty. While I thought we might have crossed the event horizon, with respect to monetary policy after 2008, we are now squarely in the centre of a black hole.” – End of Guistra. 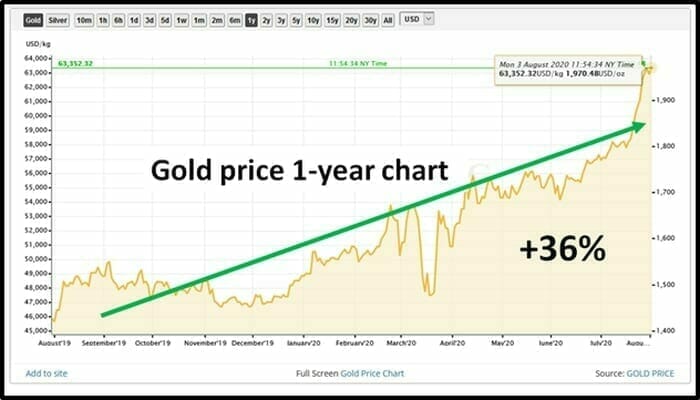 “Blackrock Gold (BRC.V), highlighted in these pages roughly 16 months ago—Gold opportunities in the mother of all mining jurisdictions: 21 Nevada ExplorerCo’s for your consideration—climbed from its lowly sub-nickel pre-Andrew Pollard price levels to its recent close at $1.27, up 3100%,” stated Equity Guru’s mining wizard Greg Nolan on July 24, 2020.

“Our most recent coverage of the company—Blackrock Gold (BRC.V) drilling for high-grade in the Queen of all silver camps—was just over two weeks back when the stock could have been purchased for < $0.40.

Blackrock is a dazzling example of how the right project, and the right management team, can reward shareholders in a way that might best be described as surreal.

$1,000 invested immediately prior to CEO Pollard taking control of Blackrock is now worth $31,000.”

“Creating a new [monetary] system will not be easy; likely, it will be very messy,” states Guistra, “What that will look like is anyone’s guess. Perhaps a trading unit consisting of a basket of currencies and/or commodities. And of course, the only currency that has survived throughout the millennia, gold.”