I know you guys are all hopped up on goofballs buying gold right now, and shrooms before that, and biotech if you’re clever, and oil and gas for a minute, and weed when you’re bored and remember the good old days, and there’s always someone in the cheap seats banging on about silver and copper…

Lookit. I’m going to come at you with something new right now and I need you to know I’m not being paid to talk about it. I’m diving into this late on a Thursday night because it’s just become a thing and it’s still small but the word is out and it’s rising by the day and there’s only a handful of companies going at it which means it won’t be tough to figure out how to play.

I swear, ‘rising by the day’ is the last gas pun I’m going to make. It’s safe to continue.

It all started here, a week ago:

Royal Helium (RHC.V) had gone from being a 3c stock literally forever, to a 9c stock in May, and a 57c stock in mid July when I noticed it.

As often happens when something is going on a quiet spike, my announcement that it was a thing (and my making the rash decision to chase it) coincided with a sudden downturn. 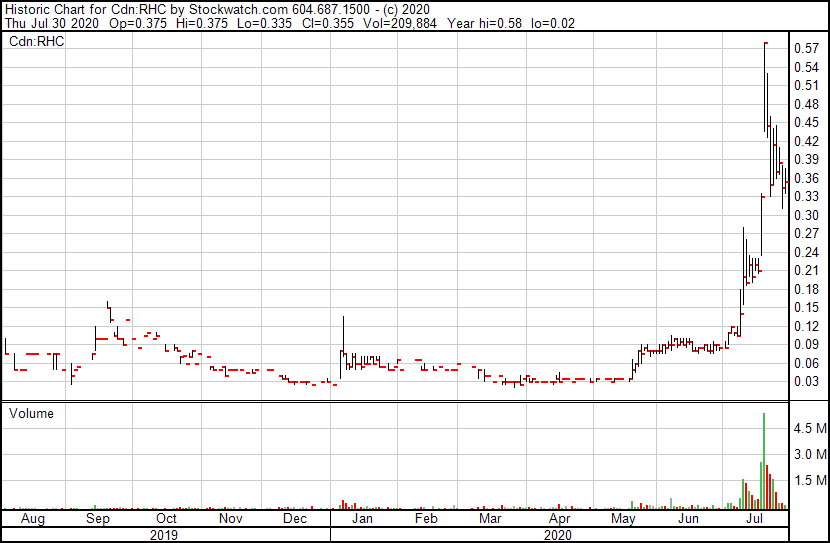 But nobody who was sitting on that 3c stock, or even the 9c incarnation, is complaining about the spike settling down at $0.36 today. You guys dream of that sort of return.

Over at Desert Mountain Energy (DME.V), shit’s even more real. 16c in April, double that in June, and double that again in July sits that stock at 68c currently – enough for warrant dollars to start rolling in, in a meaningful way. 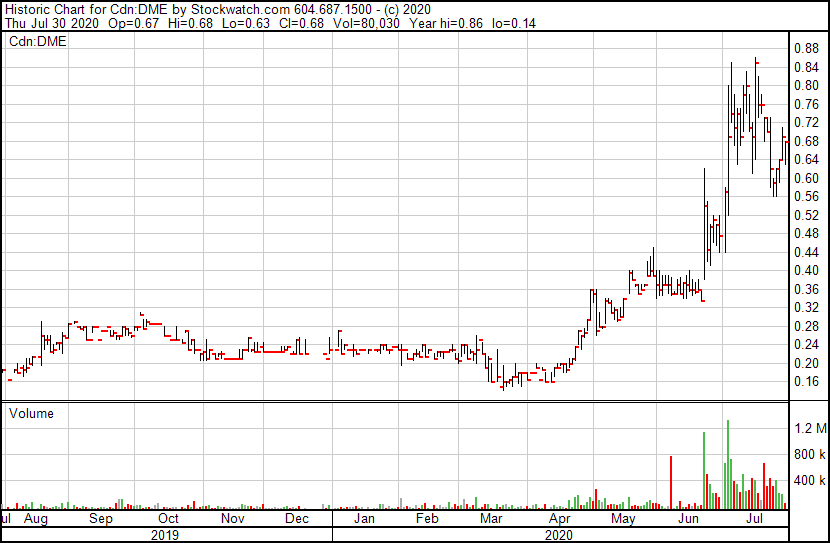 What the hell is going on here?

This hasn’t gone unnoticed at the broker end of town, and Cormark Securities’ Michael Mueller was among the first to put words on paper to explain why.

Oh Michael. We’ll let him off for that piece of unfortunate finance humour because I’m gonna quote the shit out of him for the next bit.

With a major global reserve in the US out of the picture, rapidly increasing demand for helium from a variety of  high growth sectors has brought some spectacular price increases for this coveted noble gas. We see the emerging North American helium sector as an exciting opportunity for investors to gain exposure to small-cap companies that are leveraging conventional oil and gas expertise, and in some cases exploiting existing natural gas discoveries, to tap into the tremendous economics offered by helium extraction.

The oil and gas market is fakakta, but some of those wells nobody wants to work anymore have an interesting helium side hustle, and getting to that gas isn’t far different from getting to the natural gas we all rely on.

Alongside the better-known uses of helium (e.g., balloons, medical equipment), the growing space exploration industry and the world’s increasing dependence on technology and high-powered computing will continue
to propel demand for the gas.

And where it’s needed, and badly, is locally – because the existing supply is depleting fast.

As a relatively scarce, non-renewable resource that has no replacements in many of its applications, helium consumers have increased their focus on supply certainty as new projects in Russia, Qatar, and Africa carry significant geopolitical risk.

While a reliable source of helium prices does not currently exist, the last US government auction in August 2018 saw prices spike 135% Y/Y to US$280/Mcf. With similar/stable pricing, we forecast IRRs of ~140% with payouts just over one year.

This is meaningful. Being able to set up production and getting your money back in a year is bananas. Whatever happens in the gold space, nobody looking for it today will be digging it up in a year, or even three, in a substantial way. But helium? It quite literally rises to the occasion DAMMIT I SAID I WOULDN’T DO THAT.

The only problem is finding the stuff.

The void in supply created by the US depleting its helium reserves in 2019 (~25% of global supply) has opened up an enticing opportunity for new North American players to supply helium to a growing market. North America offers an attractive environment for helium extraction given the availability of a vast conventional well database, ample seismic data, drilling/geological expertise, and stable regulatory systems offering favorable lease terms and royalties.

Not so fast. The current shortage comes from the fact that the US Bureau of Land Management, which for decades hoarded helium ‘just in case’, was compelled by lawmakers to get out of the way of private enterprise and disband their collection.

So it was that, every year since, the government blows out a bunch of under-priced helium, which has the knock-on effect of making it absolutely silly to bother looking for new resources.

But now the US hoard is drying up, and there’s nothing new to replace it.

Nothing yet anyway. Once you have the desire to get new helium assets, you then need to actually find helium in the world.

To produce helium, first you have to have the situation in which helium can exist, which generally involves having a collection of thorium, uranium, and time, on your hands.

Mike Mueller, drop a beat on me.

The other approach picking up more interest with the decline in natural gas prices is companies looking for conventional natural gas assets and developing them for their previously overlooked higher-value helium content. Though not all of the >800,000 wells drilled in the [Western Canadian Sedimentary Basin] are relevant in the exploration / development of helium, ~650,000 wells are in Alberta and British Columbia with ~190,000 having gas analysis and ~2,000 containing helium content of at least 0.5% (economic threshold for redevelopment). These are largely concentrated around the Peace River Arch (PRA) in northwest Alberta / northeast BC and the Sweetgrass Arch in southern Alberta.

2000 potential helium targets just in Western Canada. Tell the Fort Mac boys to get their tricked-out pickups out of storage and call their meth dealers out of hibernation, because we’re bringing the industry back baby!

The US has plenty of opportunity too.

Arizona’s Holbrook Basin has boasted some of the highest concentrations of helium recorded at up to 8-10% but until recently, fields there have not seen activity since the mid-1970s.

All of which means the single biggest problem for helium producers is how to stop their tankers from floating away. I kid.

So who are the players?

Desert Mountain Energy (DME.V) has been actively grabbing at helium prospective land for a few years, and raised enough cash earlier this year to do a fly-over looking for drill spots, and then complete their first drill program. The results of that come in mid-August, which means folks buying right now and making their bets on what’s to be found. DME is plumbing that Arizona hotspot that hasn’t been hot in a while, which is a smart first mover play.

After their fat stock rise, they sit at a $30 million valuation, which is up there for a company that hasn’t shown result yet, but also demonstrates investors are making sector bets here.

Vance Loeber’s First Helium is lining up to be a big player in the Alberta space, but isn’t rushing his deal to the public markets, preferring instead to raise money privately and acquire wells. He told me his plans on this end several years ago, with the quiet confidence of someone who knew something was going to run. He wasn’t wrong.

Royal Helium (RHC.V) holds a ton of land worth exploring in southern Saskatchewan, but isn’t as far along with that plan as Desert Mountain  in that, while they’ve identified drill targets, they’re not poking holes in the ground soon.

Royal has benefited from the proliferation of existing data from the last hundred years of oil and gas exploration. and they’ve used that to hone in on where they think they’ll find the lighter-than-air stuff. For now, they’re flying over it with cameras and running seismic data, but the recent jump in their share price is likely to bring financing opportunities and more of a rush to advance.

UPDATE: I was closer than I knew with that last sentence. Money raised, drills prepped.

“This program successfully firms up our first set of drill targets into the helium play at Climax and we look forward to the first drill program this fall. We plan to continue and repeat the geophysical work and drill programs over several regional targets we have in inventory.”

This time around, let’s get in there early.

FULL DISCLOSURE: No company mentioned here is a client, but I might buy all of them.