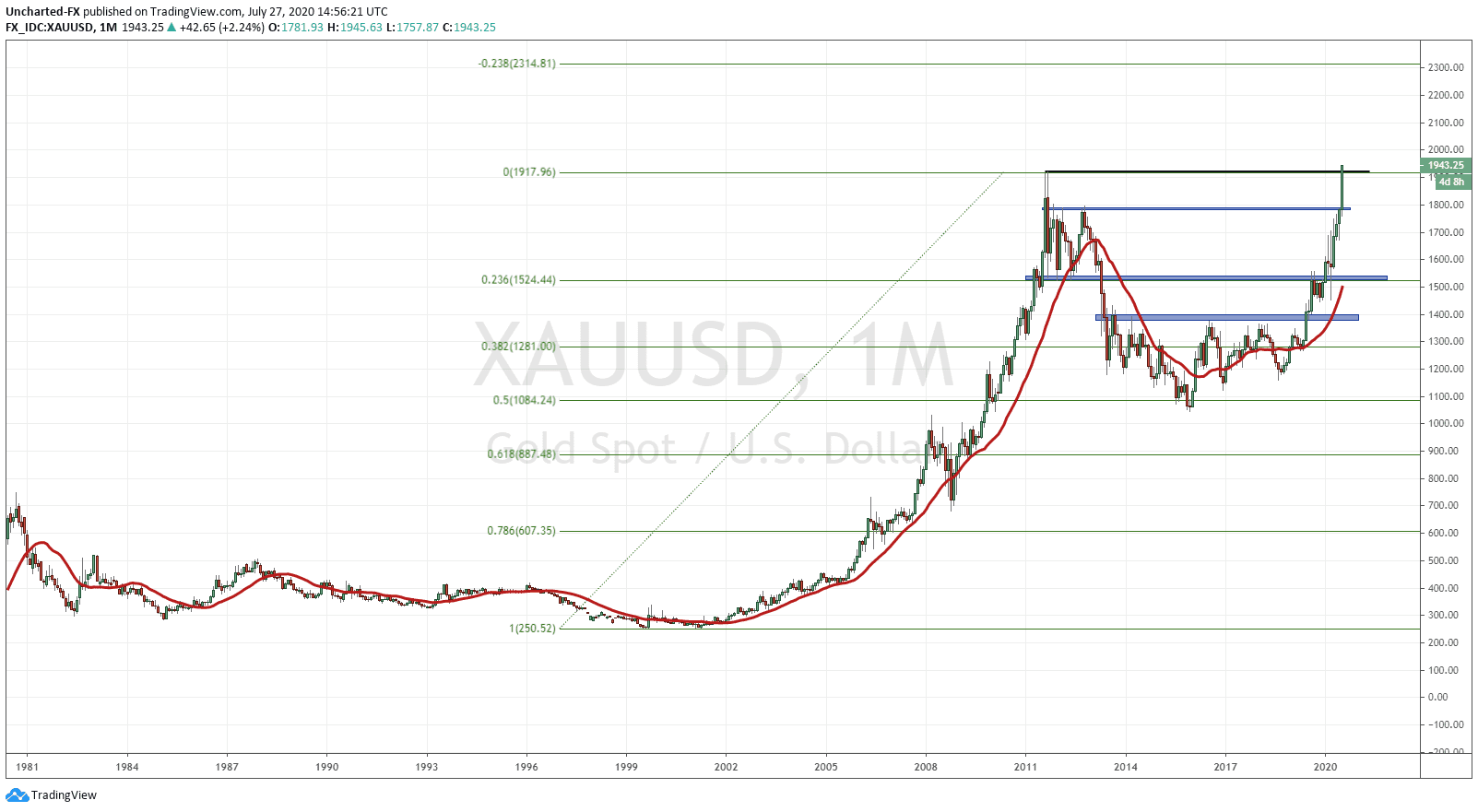 We here at Equity Guru have been calling for eventual new record highs in Gold since last year. If you spoke with me personally at the Vancouver Resource Investment Conference back in January, I outlined why the technicals and the fundamentals both favour a move higher in Gold. Well folks, Gold hit all time records highs against the US Dollar last night as the European markets were opening.

Many are asking why Gold? If you have followed my work then you know the many reasons. I will briefly summarize them here but you can read more about it in the posts I will have linked up. It really stems to one thing: Gold is the confidence crisis metal. You go into Gold when there is a confidence crisis in governments, central banks and the fiat money. The environment today is ripe for all of this, and you can argue we are in the midst of this confidence crisis.

We saw the European Union unleash their unprecedented stimulus last week (1.8 Trillion Euros). The US is set to also release another round of stimulus as it came out that 30 million American are in danger of being evicted as they do not have enough cash. With stimulus checks running dry and businesses not recovering and hiring as expected, the government will once again need to provide checks. To be honest, it seems this can never end. The taps have been opened and they will not shut. This seems to be the precursor to a large Modern Monetary Theory experiment.

The Gold bulls know that nothing ends well with a lot of money printing. The more fiat that is printed, the weaker the currency becomes (if demand does not grow with it!). It takes more of the fiat to buy something, creating an effect that prices are rising. Governments love inflation because it means more taxation. If real estate and goods go up, then it means more money for governments through sales taxes and property taxes. In this environment where governments are essentially broke and are throwing out stimulus packages left and right, nobody is asking how this will all be paid for. Taxes.

Being someone who follows money flows and uses a macro approach, I tend to agree with Ray Dalio’s take on Gold. Gold is not a commodity, but it is the best currency at a time when all central banks are cutting rates and inflating their fiat. Gold will also play a role in safety. Fixed Income, especially government bonds, were the pinnacle of safety especially to those who follow the asset allocation model. But what do you do when the yield in a bond is not beating the real rate of inflation hence is not providing you with real returns? This is an environment that has lasted for sometime, which has seen pensions funds, which have been historically heavy in fixed income for obvious reasons, take more risk and shift into large equity positions in order to make their 8% target yearly return. The yield is worse now, and many including myself, have argued that bonds are now being TRADED for capital appreciation rather than holding for yield. If negative interest rates are coming to the US and Canada, then you would be buying bonds now, even though they are not providing a real return, in order to sell them for capital appreciation because they will be more valuable since they yield more than the new bonds that will be issued.

In terms of the Gold chart, 2000 is now the level of interest for many people. I have actually fibbed the monthly chart of Gold, and my first fib target is around 2319. Not saying that will happen instantly, but many people are using fibonacci to target levels we have never seen before.

Mentioned it earlier, but we here at Equity Guru have been bullish on Gold and have not hidden it. In fact,  we just added to our GDX positions last week. I have spoken about a chart pattern I like on the GDX and GDXJ previously, and why according to those chart patterns, we are just at the BEGINNING of the Gold bull market in the junior miners and the miners. My trigger was Gold eventually breaking into all time highs…. Which it has done. Expect more news coverage on Gold which will attract the retail traders and those chasing yield. Junior miners are still cheap which adds more incentive for retail traders to trade these markets hoping for big returns. I believe the mania we are about to witness will be similar to the alt coins moving during the Bitcoin boom. 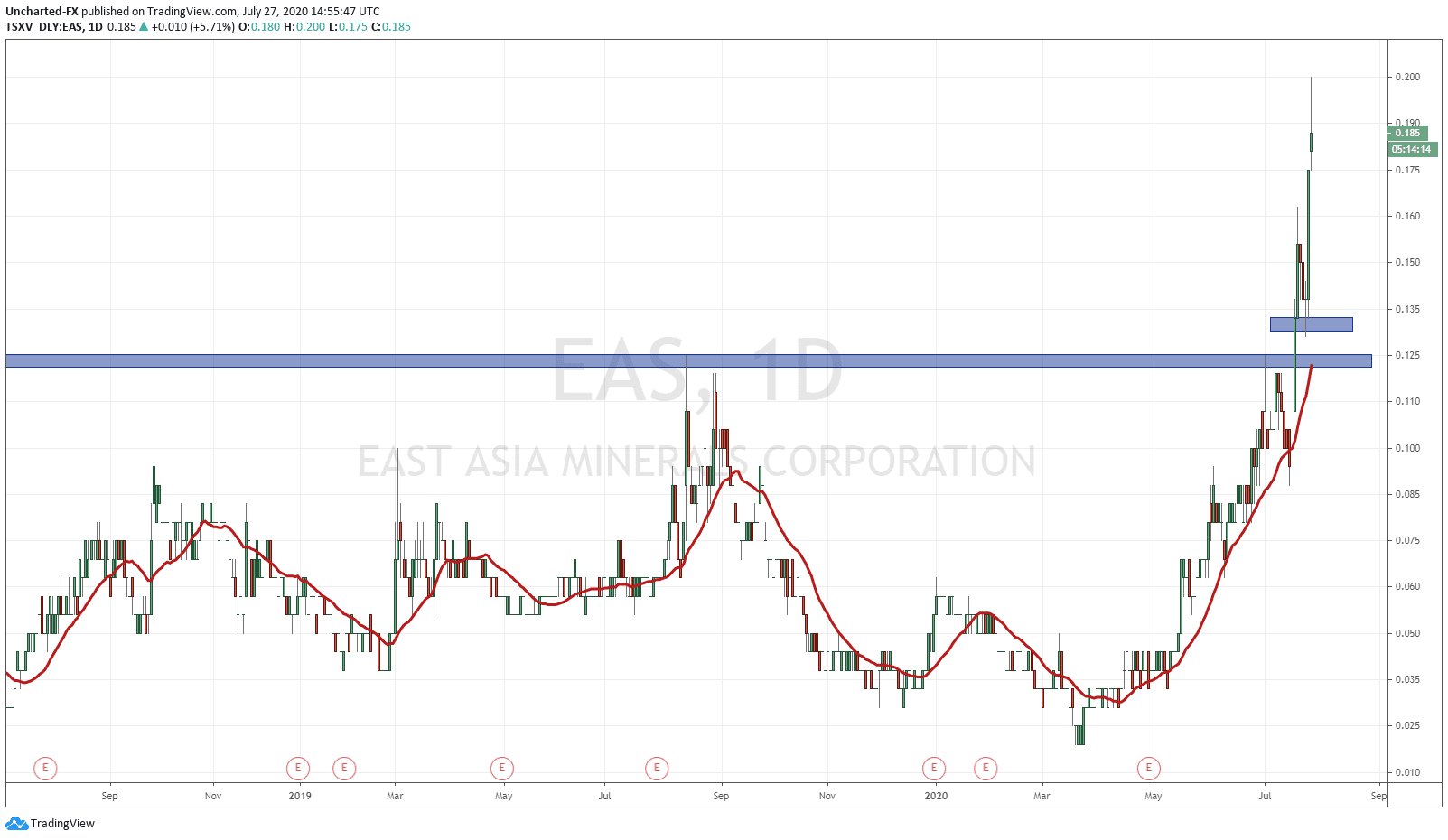 East Asia Minerals was a chart and a trade idea I have discussed before. I talked about how the chart pattern was similar to that of Gold, GDX, GDXJ and a few other juniors. We then achieved the breakout on updates about the AMDAL, and closed above major resistance which was our trigger on a technical level, to enter the trade. The stock is continuing to rally today, but on Friday’s 25% gain, we got another level which provides a second opportunity for those looking to enter the trade: we confirmed our first higher low in the uptrend. An uptrend is composed of multiple higher lows and higher highs, and our job is to ride this until signs of exhaustion. This first higher low also coincides with a retest of the breakout zone. Personally, I entered at 0.135 on the retest candle as large wicks indicted buyers stepping in. I spoke about my first target for the trade being at 0.25 and we are 5 cents away already. This is just a first target, depending on how price reacts there and we may very well continue to hold most of our position. With the move in Gold and the GDXJ and GDX, this is more than likely.

In order to use higher lows in a trade, many swing traders use them for placing their stop losses. Since we are in an uptrend as long as we hold those swings, the stop loss would be placed below 0.13 and you would let the price ride higher. Of course we should expect multiple higher lows on the way up, as price does not just move up in a straight line. As this occurs, the swing trader can adjust his or her stop loss to that next level while riding the trade. Just remember, when you reach a certain percentage gain, it is prudent to take profits. That way the rest of the trade can be risk free for us.