Windfall Geotek (WIN.V) has expanded their relationship with BTU Metals (BTU.V) to include the search for high probability gold targets to be developed during an internal project at the Red Lake mining camp.

We wrote about this company last week when they were employing their artificial intelligence technology in the search for gold deposits in the Kirkland Lake mining camp. Their technology, if you’re disinclined to clicking links, is called the Computer Aided Resource Detection System (CARDS). We also reported in that article about their prior relationship with BTU, which included the confirmation of positive results from their ongoing work.

“The early identification of so many high priority targets using Windfall’s proprietary AI is very encouraging. Our property position is one of the largest in Red Lake and covers nearly 200 square kilometres. Most of the potentially gold bearing rock units are covered with overburden so additional tools and techniques can be particularly effective. This new layer of AI targeting is now being incorporated into the mix as we attempt to vector in on the areas with the highest gold potential,” Paul Wood, CEO of BTU.

Now BTU is chasing after high-grade gold targets and copper-dominant massive sulfide targets on their 200 square km property, which shares a 35 km border with Great Bear Resources (GBR.V). They have analyzed one third of the property area, and identified 35 high priority targets at a high correlation rate with known gold mineralization within the Red Lake camp. 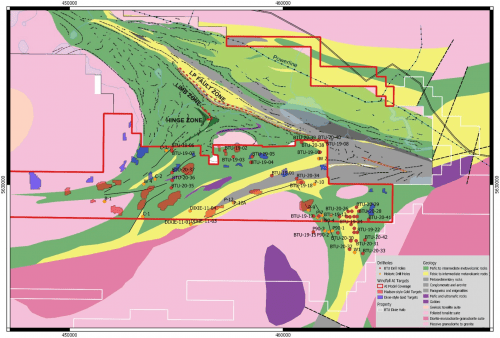 Source: Windfall Geotek’s investor deckThere’s still some more follow-up and validation of the generated gold targets to be done using the CARDS AI, but the company anticipates being ready to drill on their highest priority targets by the end of the summer.

“Rarely have we seen such enthusiasm in one of our completed projects. We are proud to see our talented team and methodology validated at such a quick pace. This is a great sign that our new business model and final deliverables are of high value to our clients and we look forward to adding more as we progress,” said Michel Fontaine president & CEO of Windfall Geotek.

CARDS on the table

The proprietary technology uses pattern recognition algorithms to ascertain the signatures of both positive and negative data points and constructs a model capable of making predictions on either the positive or negative nature of new data points.

Basically, you digitize the historical data, and let the algorithms take it from there. Data is entered into CARDS in the form of a georeferenced database, and each point is linked to its own set of characteristics taken from geophysical surveys, drill and rock samples assays, geological maps and more points of entry.

Stripping it down, the CARDS process has four parts:

The first involves data gathering and processing followed by model construction, after which is prediction and data mining, and the last step is the actual presentation and a map rendering of high probability zones. If you’re interested in the fine details they’re available on the company’s investor deck, but here’s a taster on some of the sources used during data gathering and processing:

What’s most interesting about CARDS and what separates it from other rules-based computer models is that CARDS isn’t limited by the biases of the rules of any particular geographic model. Instead, CARDS has the ability to learn and make predictions based on the signatures of positive data points of varying characteristics, and also predictions on any geological deposit type represented in the data set.