We added to our GDXJ Position on the Confirmed Retest! Bull Market still in its Infancy! 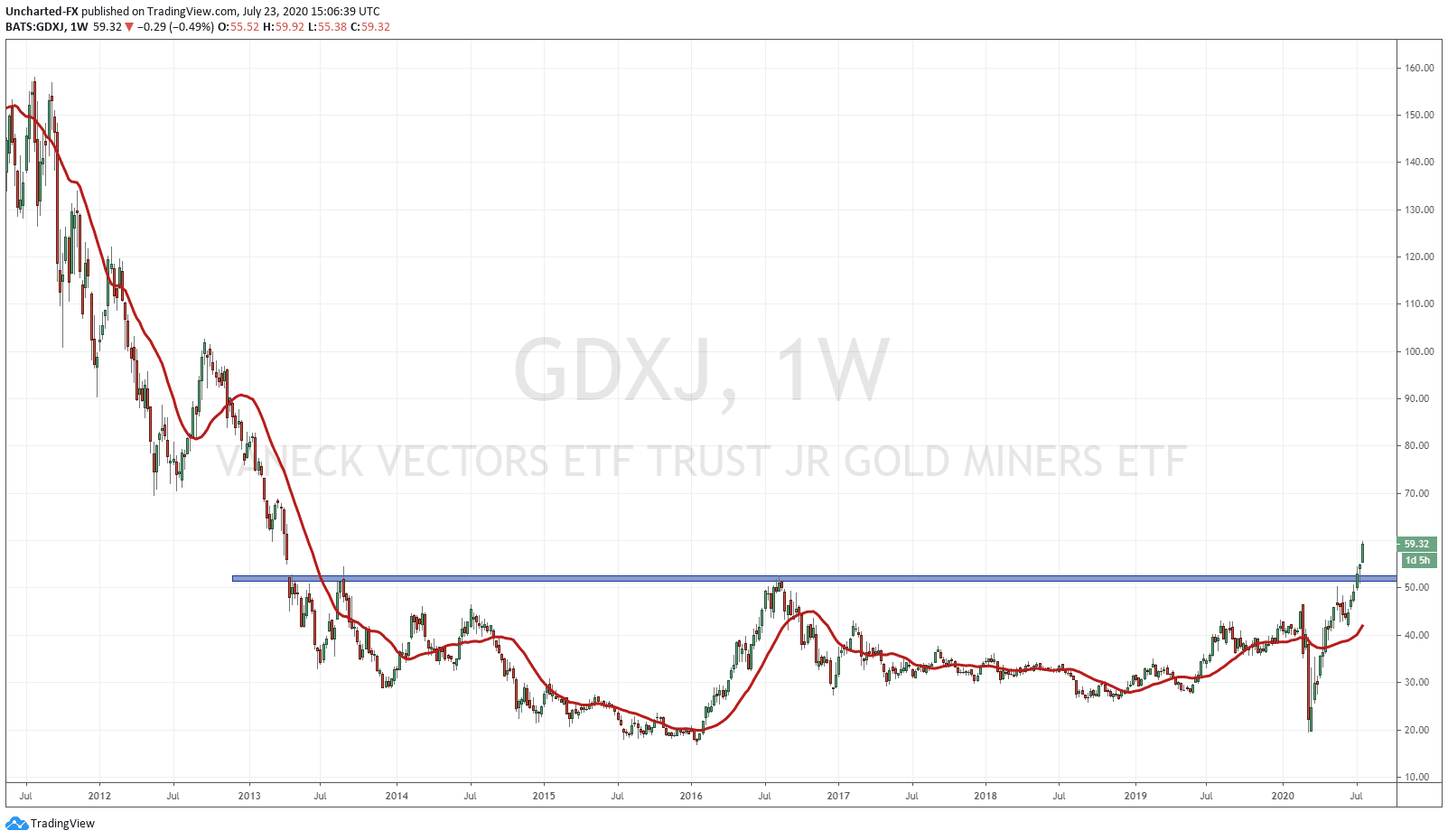 It is no secret that we at Equity Guru have been bullish on precious metals for a very long time. Recently, the prices of Gold and Silver are hitting levels we have not seen for years. Silver alone had two back to back 6% gain days! There is a lot to be bullish on. The macro environment is ripe for metals. Some say this is due to inflation and a run into commodities. Some say this is due to the fall in the US Dollar. Some say it is a run into safety due to the craziness and uncertainty. We did see some crazy data today with US Jobless Benefit Claims rising for the first time since March, ending that downwards trajectory we were watching. Talks of a second round of layoffs have started.  I believe the rise in metals is a combination of all which can be summarized as a confidence crisis in governments, central banks and the fiat money. Distrust in government is high, and just think about the upcoming elections in the US. Central banks continue to print up money to buy up assets. In the process, they are attempting to inflate their currencies with all central banks cutting rates close to 0 in a race to the bottom.

Followers and readers know my base case is that large money will flow to Gold and Silver. There will be a time when holding bonds for yield won’t make sense as Ray Dalio has said. Currently, many fixed income traders are holding bonds for capital appreciation betting on interest rates to be cut further into the negative. We will have a situation like Europe and Japan where the bond markets are dead. Nobody in their right mind would show up to the bond auctions to buy negatively yielding debt. It is really just the Bank of Japan and the European Central Bank showing up at the auctions to buy up all the bonds. This is also why European fixed income traders do prefer US treasuries as they still provide a positive yield.

Fund managers who put money in short term bonds (1 month or 3 month) in February to protect themselves against the Covid sell off, got a rude awakening when they received their cash. So much changed in a short period of time as the Fed cut rates down to 25 basis points in less than a month. For a fund manager who had to make yield because their job depends on it, where do you go? You cannot hold cash for a long time. I argue most of that money went into stocks. The Fed created an environment to force money to go into stocks to make yield. Once again, harkening back to Ray Dalio, Gold is not only the best currency during a time when all central banks are cutting rates and printing boat loads of money, but Gold may be the new bond. The new asset to hold as a run into safety. Gold does not have a yield, but neither do bonds anymore (real yield). If you were trading bonds for capital appreciation, they are not fast movers, whereas Gold can move 3% or more in a month bringing in a return while providing safety (we are seeing that sometimes in single days in this market environment!).

Lukas Kane in his article spoke about massive investment flows into the GDX and the GDXJ. The importance of this is massive. Most large funds do not have a large allocation in Gold. Some say most only have a 1% or less allocation in the precious metal. When Ray Dalio gave his take on Gold and why he is buying it, many funds began to pay attention. I would also say they began initiating allocation into Gold. If funds would even allocate up to 5% of their portfolio into Gold, we will easily see new record highs in Gold priced against the US Dollar.

Now put yourself in the shoes of a fund manager. What is the best way to play Gold? Most cannot play the junior space due to the low share prices. Been saying and I maintain that there will be a mania in the juniors akin to the alt coins during the crypto boom. The trigger will be Gold breaking into all time record highs and it will be fueled by the retail traders. Heck maybe even the Robinhood traders will ditch Tesla and join the Gold rush when they see the prices of some juniors and miners. For those interested in the fundamentals of juniors, and what juniors look to provide some real value, check out Greg Nolan’s posts. His latest junior round up can be read here.

Physical bullion is an option too, but storage costs would be an issue. Miners are an option and a good way to get a return as metal prices move higher, however a lot of miners have balance sheets with a lot of debt.

The three ways large funds and big money are going to play this Gold boom will be by either buying the GLD ETF, GDX ETF, and/or Royalty and Streamers who have better balance sheets and lower costs. I also suggest this to people who have no interest in the mining space and just want to play the Gold move as safely as possible. The juniors provide crazy returns at times but there is a larger risk and it isn’t for everybody. Playing the GDX or the GDXJ is a good way to play without choosing individual stocks and you can be rest assured that large funds are also in the same position with you.

I put out a blog post a few weeks back stating that the junior Gold Miners bull market is just beginning. I posted the chart of the GDXJ and outlined we have had this breakout from a range on the weekly chart that we have been waiting for 7 long years. That breakout was our trigger and a confirmation that this bull market is just beginning. We opened our GDXJ position the following week after the confirmation close. My targets for GDXJ remain at 99-100 for the longer term, and I think we will see some reaction at the 70 zone.

We must remember that price does not move in a straight line, but according to market structure, an uptrend is composed of higher lows and higher highs. As long as the higher lows remain, we are still in the uptrend. So this means I do expect a red weekly candle pullback at some point before moving higher to give us our higher low to work with. 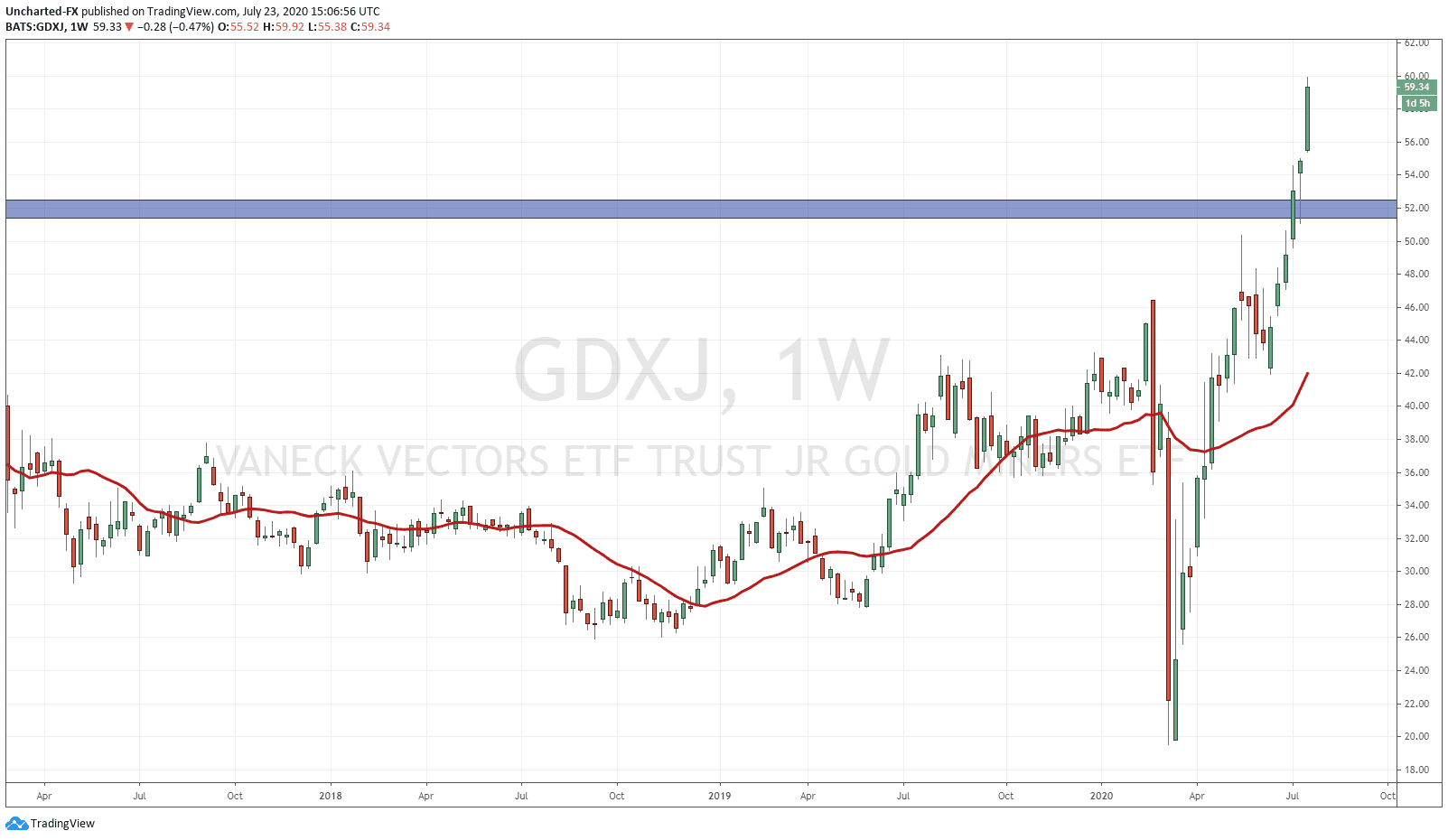 Last week was when I thought this would happen. We did a deep retest back to the breakout zone at 51.50. Once again, pullbacks and retests of breakouts are entirely normal and should be expected. I was watching this area for a sign to enter. Since we are holding GDXJ for the long term, the weekly chart is being used since that is where the breakout occurred as well. Last week’s weekly candle finished green! You can tell from the long wick that buyers indeed did step in to hold support. Extremely bullish in my opinion.

This week we added to and increased our GDXJ position. The retest was confirmed and is a positive sign which gave people an opportunity to get in if they missed the initial break out. As long as we remain above the support now at 51.25, the uptrend is still valid. I repeat: we are still in the beginning stages of the GDXJ bull run. This chart pattern is what I have used to trade Gold, GDX, Pure Gold Mining, East Asia Minerals, and recently, used it to outline my 27-28 targets for Silver in the next few months.