Australis (AUSA.C) boardroom donnybrook pits their last acquisition against the next acquisition

When shareholders gather, it’s rarely for good intentions, and thus we see a pitched battle breaking out at cannabis investment group Australis (AUSA.C) HQ where the folks behind one of their previous acquisitions aren’t exactly enamored with a plan to change the business model in favour of their next acquisition – which just happens to also be a major shareholding of one of Australis’ directors.

As the lawyers prep for a scrap, let’s take it back to happier times and explain how they got here.

March 2019: Australis buys Green Therapeutics for up to $8m

Not a crazy deal, but one that included some back loading for the owners of GT; US$6.4 million up front in common stock of Australis, with the rest coming in installments as the company hit expected milestones and built out their cannabis grow facility.

But when the deal at Australis changed a little this year – again, standard enough considering changes in the weed space as a whole – GT didn’t like where things were headed.

What was once a burgeoning weed grow in the making:

Australis Capital Inc. has entered into an agreement to acquire Passport Technology Inc. on June 25, 2020. […] The combined business positions Australis in three complementary verticals within fintech leveraging purpose-built technology for highly regulated industries with a growing need for unattended kiosk solutions – a global market expected to surpass $46 billion by 2026.

That meant the effective end for GT as an Australis unit, and (perhaps more importantly) no chance for that team to earn its milestone payments.

Usually, that’d mean a quietly negotiated exit and settlement. But this is not a usual time.

The kink here is one of Australis’ directors owns a hefty chunk of Passport, making it a ‘related party transaction’, which brings a whole slather of rules and compliance issues, such as having third parties confirm the asking price is fair, and ensuring multiple levels of Australis’ management and oversight have looked things over and confirmed nobody is making anyone’s uncle fraudulently wealthy.

The company says it’s done all that, but the deal is enough for GT to feel they have grounds to get in the way of its completion.

[GT] allege that the transactions contemplated by the contracts [to purchase GT] were predicated on Australis establishing its flagship cultivation and manufacturing facility with Green Therapeutics’ experienced operational team and the transferred assets.

Australis has decided to change its business from cannabis brand development, intellectual property, technology, cultivation and manufacturing to ABM payments and merchant services. Construction of the manufacturing facility is not part of Australis’s business plans, and Australis has announced that it intends to sell the property and use the proceeds to purchase Passport Technology Inc. (or alternatively transfer the property in connection with such transaction), a company majority owned and controlled by a director of Australis (see the Australis press release dated June 25, 2020).

Not picking sides here, but they have a valid complaint. That Passport is so tightly connected to an Australis director doesn’t make the deal illegal, or even immoral, but GT can rightly suggest the deal isn’t to the benefit of shareholders when they hold 6% of Australis stock themselves and will arguably be financially hurt by the execution of the new deal if it includes the termination of their own.

Can I just take a moment here to celebrate that the press release above was sent out by ‘Mr Duke Fu’, a name I’m socking away in my screenwriting drawer to be used as a future sci-fi character.

You can see it, right?

I digress. Australis isn’t having this lawsuit BS.

It is noteworthy that, with respect to the asset purchase agreement, the State of Nevada has placed a moratorium on cannabis licence transfers since October of 2019, which has adversely impacted Australis’s ability to realize any investment returns and for which Australis has not sought remuneration or relief from plaintiffs.

But a fair response doesn’t mean the end of the show because what we’re dealing with right now is a game of high stakes chicken.

And… an amazingly tone deaf board who upped the value of the Passport deal WHILE IT WAS BEING CONTESTED.

AUSA and Passport have agreed to amend the terms of the earnout as follows:

Let me get this right, there is a lawsuit alleging executive member self enrichment with a related transaction and now you guys think it is ok to increase compensation for these related members for a deal that most hate? Some shareholders are stupid but really $AUSA ? #IMDone pic.twitter.com/pCyhJJnYnE

So, of course, GT is about done with all of this, which means now we have a lawsuit AND shareholder activism!

A group of shareholders of Australis Capital Inc., including Roger Sykes, 1703469 Alberta Ltd., Duke Fu and Green Therapeutics LLC, and other concerned shareholders, are seeking to oppose the oppressive actions of management and the current board in connection with the proposed acquisition of Passport Technology Inc. [..] Since announcing the related party transaction on June 25, 2020, alarming new information has brought into question the merits of the related party transaction, the judgment of the current board and management, and how Scott Dowty, the company’s executive chairman and former chief executive officer, will be personally enriched at the expense of other Australis shareholders.

The Fu Crew are calling your bluff, ‘Stralis, and they’re raising you.

You just gonna take that shit?

Lordy, I need my fainting couch!

Let’s go to social media and see what folks are saying there!

Dear $AUSA, they are not the only shareholders who are not falling for the managements self enrichment scheme and it would be in the best interest of ALL shareholders to cancel this deal and to get your burn rate under control.

Agreed. It isn’t in the interest of shareholders. Acquisition is costly and is not attractive to shareholder value. Our concerns were also addressed. We were also promised no more dilution & they told us they didn’t need the private placement but it was an option $ausa $AUSAF https://t.co/HpBRB6B8K5

It’s all so horrible and such a bad look for outsiders, but the big punchline takes it to an even worse level.

As part of the deal negotiated by AUSA to purchase the ATM company owned by one of its directors, should the deal not be executed, that director gets a $2.5 million termination payout.

As per usual, it’s the shareholder who takes it in the face. 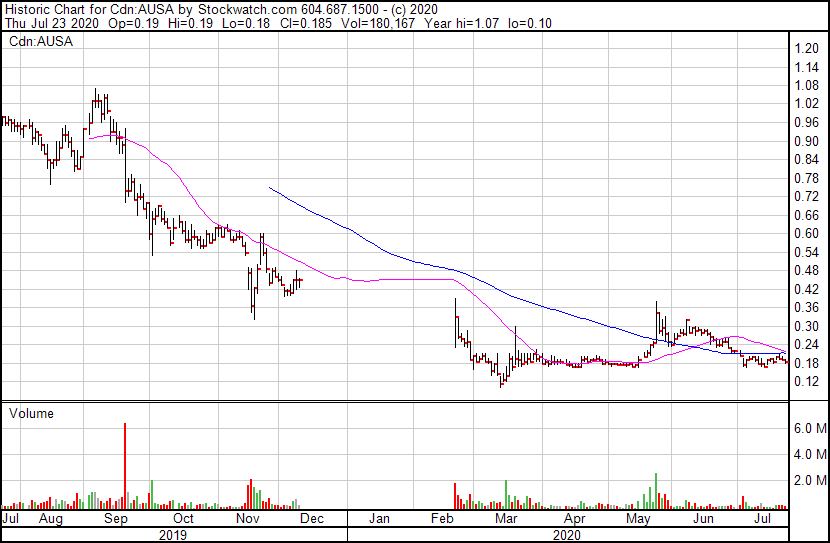 FULL DISCLOSURE: No dog in this fight, thank Christ.