Tesla (TSLA) Stock to get Clapped on Earnings? 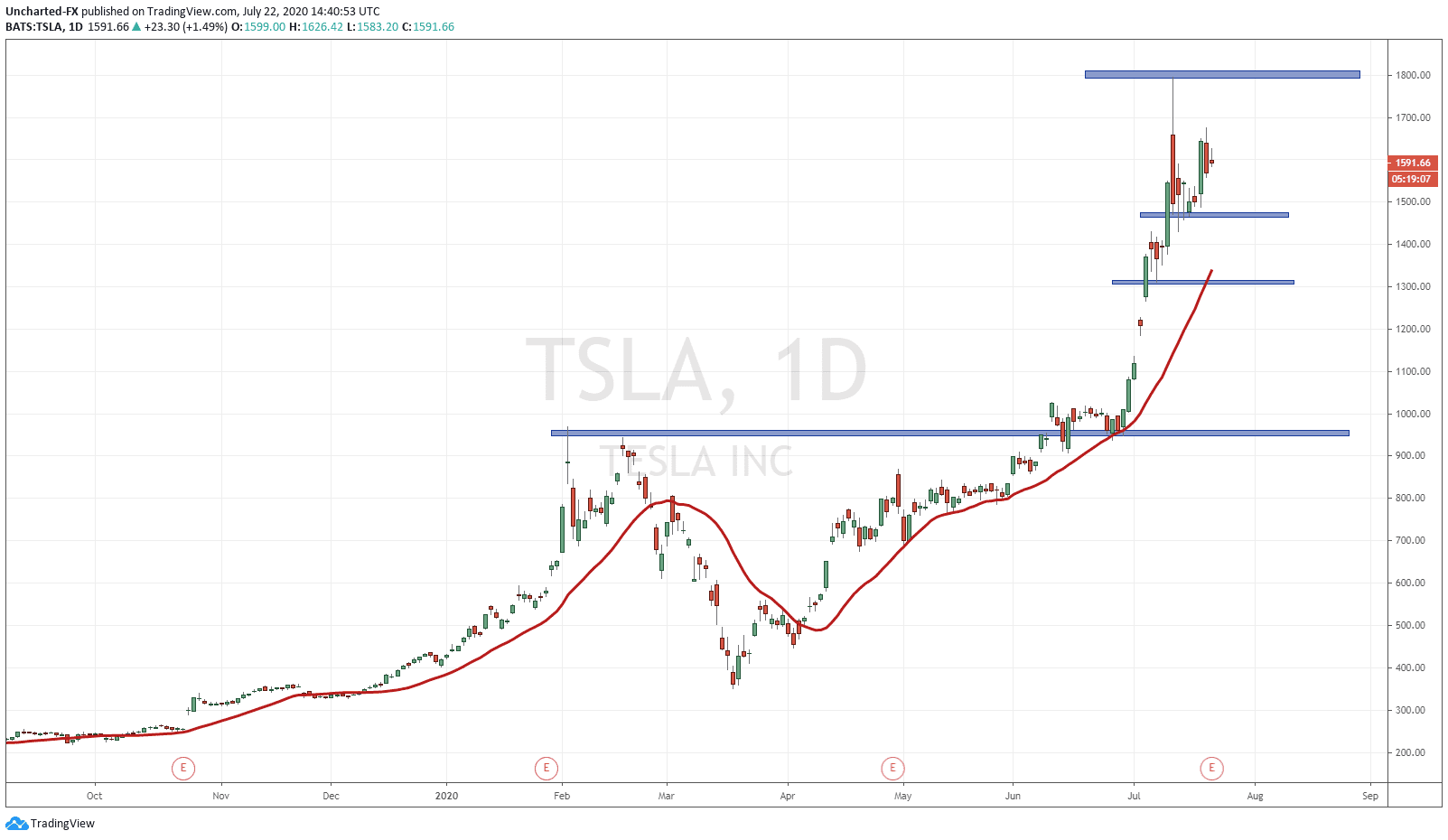 Bit of a surprise market reaction for me this morning especially with the current geopolitical news. The indices are still valid from the levels I have posted last week, with the S&P now retesting the breakout zone, and the Dow and Russell 2000 moving as expected and still above interim support. I have maintained that the market sees red days not on Covid news, but on the US China trade deal news. Well, we saw another escalation with people already dubbing this the new cold war. The US has apparently ordered the closure of the Chinese Consulate General Office in Houston which has angered Beijing. Retaliation is expected. To my surprise, markets are still up even if only slightly. The Dollar did not get a safe haven bid, nor did we see the Japanese Yen pairs drop (money flowing into the Yen). Market does not really care about this, or does not see it as a big deal. Keep tabs on this because perhaps it eventually weighs in afterwards. To me this indicates that there is no phase 1 trade deal coming. The theme for the week and next remains earnings. Today after market hours, we have Microsoft and the much anticipated Tesla earnings.

Tesla Tesla Tesla. Where do I even start. One of those companies that has divided the investing and trading community for years. We all know about the famous fund managers who have shorted Tesla. This has also led to Elon Musk blatantly attempting to create a short squeeze to take the shorts out. Through his tweets, he one time tweeted about the Saudi’s were coming in to buy a large chunk of Tesla. Didn’t happen. SEC did nothing. Tesla’s issue was a cash problem. A few months back, I did say if I was part of the Tesla management team, I would try to create this short squeeze in order to raise the price of the stock in order to get financing done to raise cash. That is exactly what happened.

Tesla has divided investor sentiment due to its earnings. The company has only had 4 profitable quarters since 2010 and not a single year of annual profitability. Today’s earnings could see Tesla achieve a year of annual profitability… a requirement needed to join the S&P index. If this occurs, it means tons of passive investment ETFs would be required to purchase billions of dollars in Tesla shares.

So far the Tesla move has been astounding with a 56% move over the past month. The question is who has caused this?

There are two possibilities…with the second one being the reason for major clappage if earnings come out worse than expected.

The first possibility is fund managers have been buying because they want to purchase growth stocks. Covid will pass over, and these companies will continue growing to a point where they will be making consistent earnings in order to pay out dividends. I am not sure of many prudent fund managers ‘chasing’ this stock at these price levels. Sure, a lot of fund managers and analysts have said the stock will hit $2000 or higher…but you need to remember most of them have entered their positions long before this run up.

The second possibility is the retail crowd. The Robinhood traders. It wasn’t too long ago when I would venture into my local Starbucks and hear the millennials talking about how their 1 or 2 shares of Amazon would make them rich. Tesla is seen as that new wealth creating stock. Seriously, a lot of US traders have used their stimulus checks to open trading accounts. There was even news that Robinhood traders held around 458,000 shares of Tesla cumulatively.

Now if we assume the majority of those trading this stock are the retail crowd….they might not know much about market dynamics BUT they do know that a bad earnings print would likely lead to a downfall so it is best to sell the stock. On Monday, I spoke about earnings already being priced into Netflix stock. We have seen the same with Logitech yesterday. Has this Tesla rise been pricing in Tesla’s earnings? AND their first annual year of profitability? A lot rests on this, and if we get a bad print…expect some serious clappage.

In terms of the chart there are a few levels to work with even on this rocket of a move. Let’s get the two extremes out of the way first. Previous highs are 1794.99 and the MAJOR support level is down at the 950 zone. Although you can use 1000 too since it is a psychologically important number. The area of recent concern is 1475. Possibility of a double top pattern forming if we get a close below this level. The 1308 zone is where a shift of the trend could occur. This zone is the higher low we are working with in the uptrend. As long as price remains above this level, we are in an uptrend. If Tesla spikes up and closes above previous highs, then we would have a new higher low to work with at the 1475 zone.

But as of now, there is a possibility that bad earnings could see the stock slammed especially there will be a lot of the Robinhood crowd. I have spoken about traps in the past. Experienced institutional traders know there are a lot of new traders out there. We have seen them try to shake the weak hands of the newbies by making price pull up to the retest zones after a large move (which is normal) and we have seen the retests move a bit deeper into support in order to hunt stop losses. Tesla stock would be prime for this due to the number of new traders in the stock. We shall watch and see after hours how Tesla reacts. A sell off could have repercussions for the Nasdaq index when we re-open tomorrow. 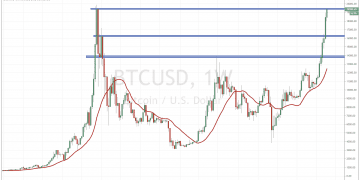 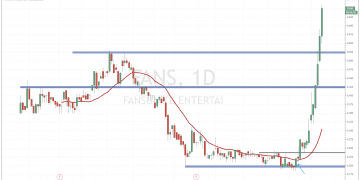