Impact Silver (IPT.V): p.1 vid – inside a Mexican silver mine

Today, silver pushed above USD $21/ounce – its highest level in six years.  This is a solid bounce-back for the beautiful metal that was slumping at 10-year lows earlier this spring.

“The silver market is on pace to surpass gold’s performance for the year,” stated Kitco News, “with its latest rally silver prices are up 26% year-to-date.”

There aren’t a lot of pure silver plays out there (it’s typically a secondary metal in copper-nickel, gold, lead, and lead-zinc ores.)

Last February, mining wizard Greg Nolan and I toured the mine site at Impact Silver (IPT.V).

During the site tour, this writer returned to his filmmaking roots, creating a series of 7 videos on the Mill, the Tailings Pond, Community Relations, Exploration, History and Investment Opportunity.

The videos are an extension of Equity Guru boss Chris Parry’s philosophy.

All shareholders are not created equally. Day-traders come and go.  Successful companies require a core of investors who understand the story and have faith in management’s ability to achieve its objectives.

Slick corporate videos with talking points lifted off the investor deck – don’t do the trick.

Here’s a sneak peek, inside IPT’s Guadalupe mine.

“No less than 5,000 historical mine workings and 50 historical mills (haciendas) have been identified on the property to date,” reported Nolan, “In a nutshell, Impact is a silver producer with significant untapped production, development, and exploration upside.

95% of the company’s current revenue is derived from Ag production. This may be THE purest silver producing company sporting a ticker symbol.”

“The Guadalupe Production Center has a capacity of 535 tonnes per day that can be increased to 600 t/d,” continued Nolan.

“Three nearby mines, all within easy trucking distance, feed this mill—San Ramon, Cuchara, and Guadalupe.

All three of these mines have different cost characteristics.

Guadalupe has produced over 10 million ounces of silver in its day—a testament to the prolific nature of these epithermal veins. It continues to deliver the lions share of Impact’s current silver production.” – End of Nolan.

When Nolan and I visited the site, IPT was trading at about .40. 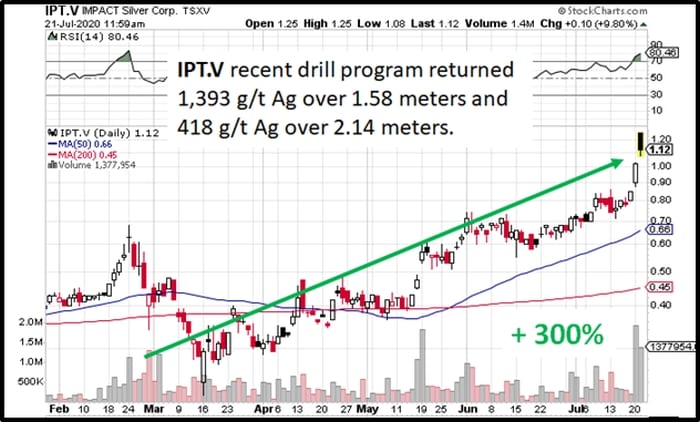 The gold-silver ratio is used by chartists to assess the value of gold & silver relative to each other.  Gold usually leads the way – the ratio widens – then silver catches up. 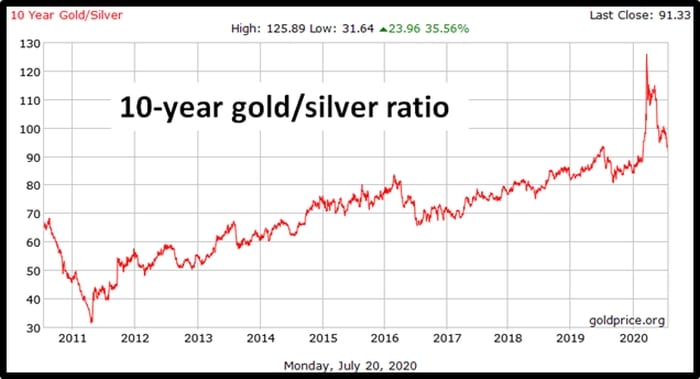 “I view Impact as a train slowly pulling away from the station—there’s no waiting on the platform for the company to get its permits straight,” states Nolan, “There’s no time-consuming construction phase. There’s no ramp-up to test rock, machine, and design. Impact has been in production for over a decade producing some 9.5M ounces of the metal, equal to roughly $175M in revenue.”

Re: IPT CFO Jerry Huang – Nolan noted: “I’ve never seen a CFO with such breadth of knowledge for all things geological. I’ve also never seen a CFO put boots to the ground as enthusiastically as Jerry.”

Full Disclosure: Equity Guru has no financial relationship with IPT.