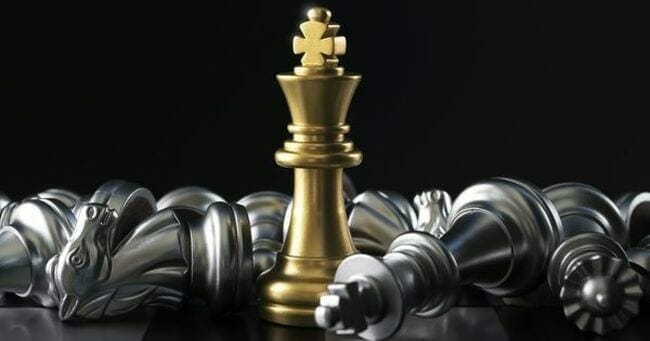 The above wish list is a rare combination of elements in this era of blown-out cap structures, recycled projects from gold bulls past, low-ball private placements, and greedy (waaaay) overcompensated ‘management’ teams.

Here’s one worth poring over…

Let’s jump right in and see what we can see. 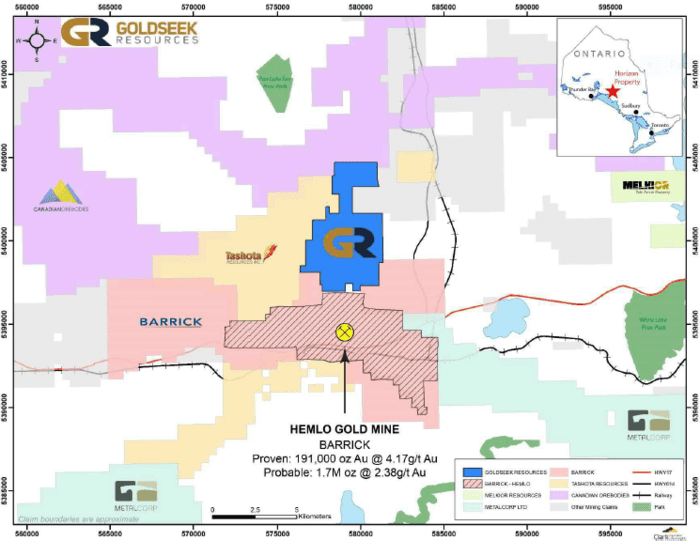 For those who know their Hemlo rocks, the setting exhibits previously identified linear breaks in magnetics, including West-North-West trending shears or faults which may splay from the regional East-West oriented Hemlo line of lode.

Goldseek is looking at an initial program consisting of 1,500 meters of drilling across three anomalies outlined in two previous geophysical surveys (VTEM and IP).

This modest drilling campaign could go a long way towards opening up the subsurface potential in Horizon’s subsurface layers. 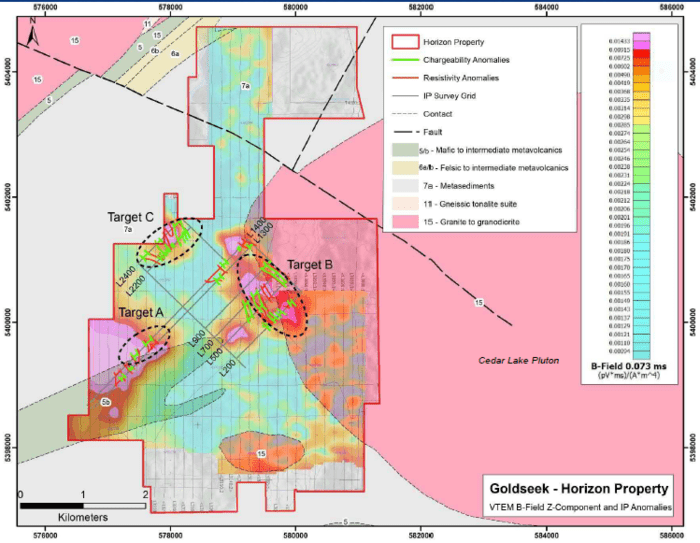 Note the scale on the above map—these targets are by no means small-scale, nor is the distance between them.

Target B will consist of two 150-meter holes.

Target C will consist of two ~300-meter holes to test the extent of the geophysical anomaly.

Of the three, Target C is the highest priority for a proper probe with the drill bit. The anomaly associated with this target was the strongest IP conductor. It also correlated well with a good magnetic feature exposed by a 2017 VTEM survey.

The anomaly occurs in metasedimentary rocks along the western edge of the Cedar Lake Pluton, a setting similar to the world-class Hemlo deposits located 7.5 kilometers to the south.

Note the nameless oval-shaped anomaly near the bottom of the above map—we should learn more about this (potential) target in the not too distant future.

Clearly, the Horizon Project is a target rich setting.

The company plans to follow-up this modest phase one drilling campaign with an aggressive surface (geochemical) campaign later this summer and fall.

It wasn’t that long ago that Barrick was entertaining the idea of selling its Hemlo asset. But today, it’s looking at Hemlo with decidedly greater interest. It might be fair to ask, “what new development, or new discovery, prompted Barrick to pull Hemlo back into the fray”?

Goldseek will be monitoring developments out of the Barrick camp closely. 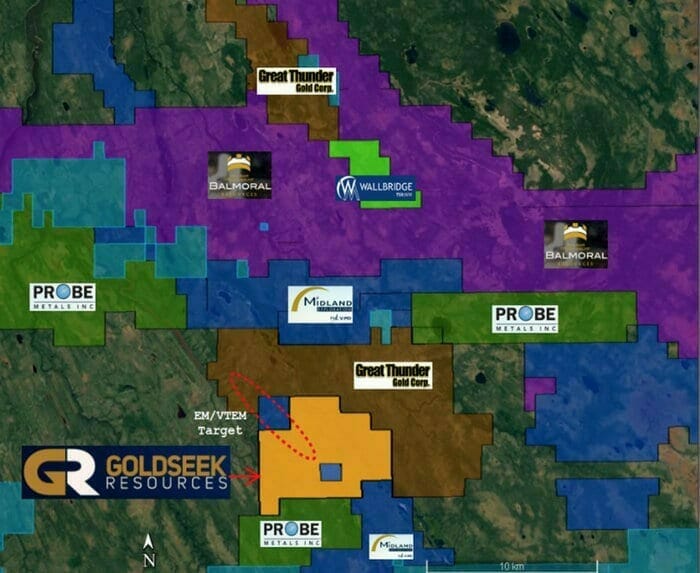 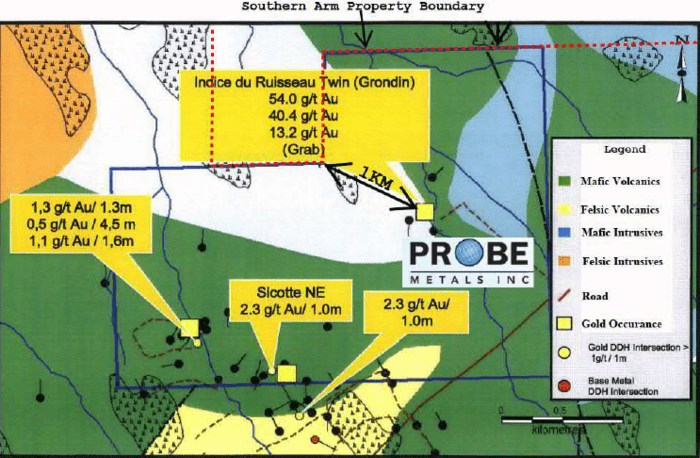 A thick layer of overburden throughout the region makes exploration a somewhat expensive proposition—the more active Goldseek’s neighbors are along Southern Arm’s borders, the better the understanding of the geological setting (the less Goldseek will be required to prospect with the drill bit).

Worth noting, Goldseek’s neighbor to the north and east, Great Thunder Gold, has Eric Sprott rather enamored with the region’s prospects. He currently holds a 15.7% stake in the company. 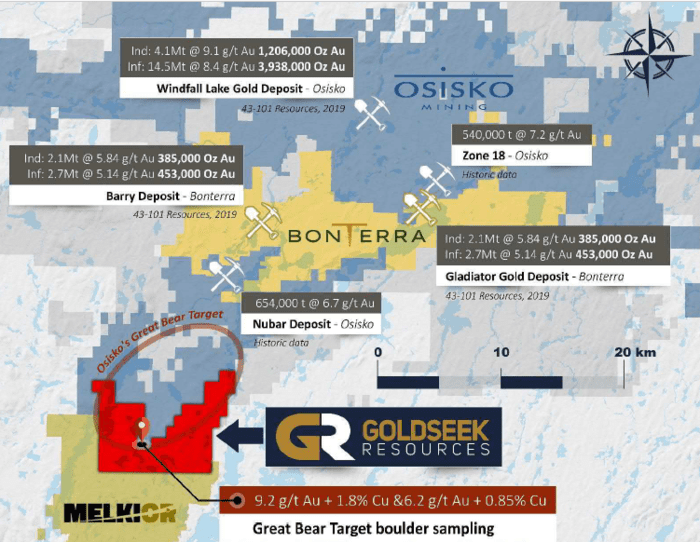 Osisko tagged some fairly significant till samples on the border of the Bonanza property.

Also, if you examine the above map, you’ll note two gold-copper values—results from a boulder sampling campaign conducted in the early ’90s.

This is highly significant. The lithology of these boulders (in addition to the positive till samples tagged by Osiko along the property border) correspond to an iron formation—a structure that could host a significant deposit(s).

The question is, “Where is the source of these two pyrrhotitic iron formation boulders”?

In 2018, Osisko drilled four holes in an attempt to unearth the source of these boulders, but were unsuccessful. No grade of interest was found. No mention of an iron formation in their drill logs.

Goldseek, suspecting the source of these boulders lie within their Bonanza claim block, recently conducted a till and boulder sampling campaign along 15 kilometers of conductive trend.

A total of 524 soil samples were taken over the course of this surface campaign. They also sampled 11 boulders and 10 outcrops. Assays are pending.

“With the Phase 1 till and boulder sampling completed, we will continue the review of the Property while we await results. We look forward to receiving the results back as we believe it will outline significant targets along our 15km conductive trend.”

This next map shows the Bonanza project (shaded in blue), and the possible source of the high-grade boulders (red outline). 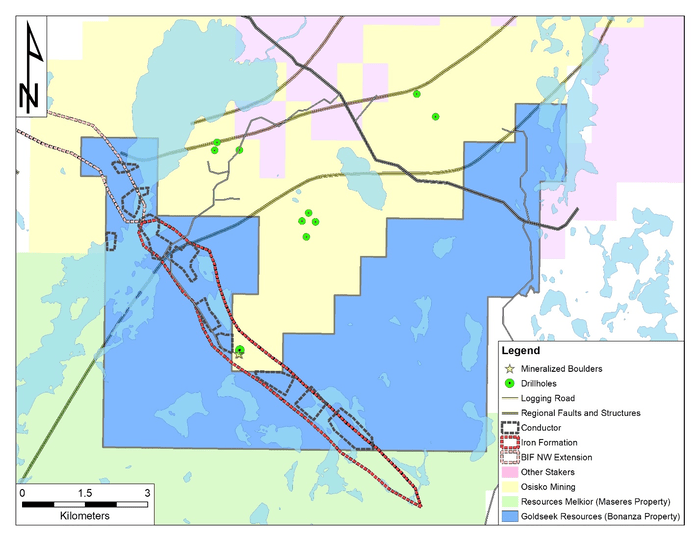 As noted further up the page, an iron formation could host significant mineralization. If they succeed in tagging the source of these high-grade boulders, expect a flurry of activity on the Bonanza claim block—IP surveys, stripping, additional surface work… all preparation for a maiden drilling campaign later this year. 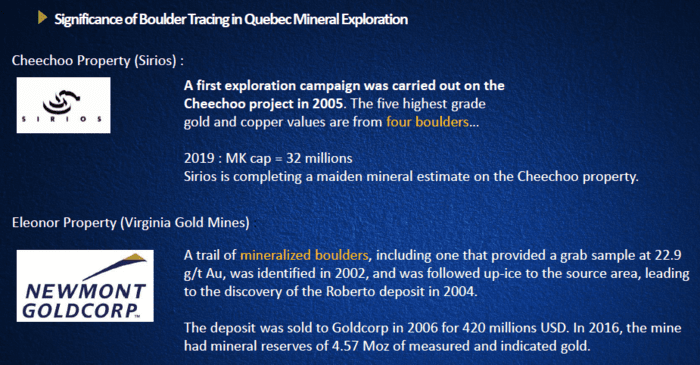 The company is excited about this chunk of terra firma. And understandably so.

There is a fourth project in the company’s portfolio…

… but with so much going on at Hemlo, Urban Barry, and Southern Arm (Abitibi GSB), it’s best left for another day.

CEO Deluce and his team have proven their technical capabilities via recent discovery success at Melkior Resources, where Deluce is also president and CEO.

Melkior’s success prompted Kirkland Lake (KL.T) to take a $1M position in the company, as well as work towards finalizing a JV agreement on the Jr’s Carscallen Project in the Timmins Gold Camp.

Melkior is also worth investigating.

Effective capital management—limiting shareholder dilution and getting the biggest bang for the exploration buck—is high on Deluce’s priority list. One look at Melkior’s cap structure—a company much further along the curve—shows that these values hold true (Melkior has < 20 million shares outstanding).

The company has 19.87 million shares outstanding and a market cap of roughly $11M.

The cash position is currently $1.3M.

Values are well aligned here: management and insiders own 75% of the outstanding shares.

If you examine the last raise, you’ll see that management took down a significant portion of the offering, in the first and final tranche.

In speaking with CEO Deluce, I got a sense that this is a man on a mission—a mission to create shareholder value via the drill bit. 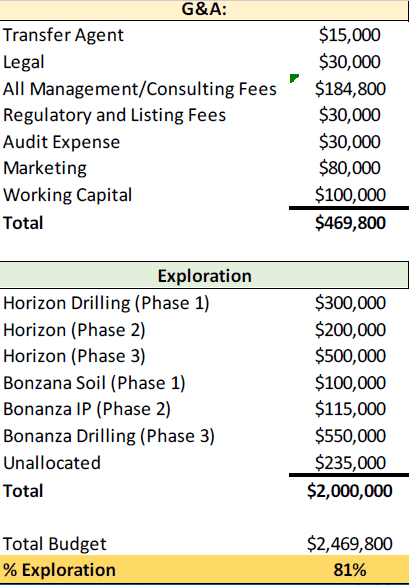 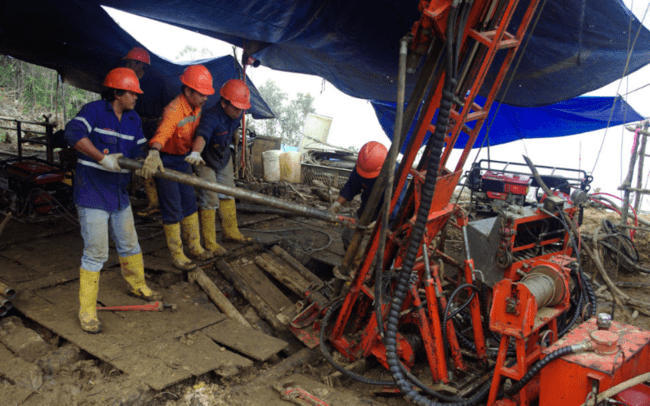