There may well be people at US-based penny stock pump factory Brewbilt Manufacturing (BBRW.OTC) making brewery equipment. We don’t know for sure because they don’t answer their phone whenever we’ve tried to call, and their IR folks’ incoming calls go to voicemail. I guess they’re just busy banging out all that amazing brewing equipment they claim to be selling all over hell’s half acre in cities and towns galore while in talks with ‘the biggest brewer in the world.’

But we do know there are real live people at California State University in Sacramento California, because they do pick up their phone, and had this to say about a recent BBRW news release that the university’s brewing program would be buying a $400k Brewbilt system for their students.

“This press release is not accurate as California State University, Sacramento has not purchased this system.”

That’s Public Information Officer Anita Fitzhugh from University Communications, responding to this, which went out over the wires from Brewbilt:

Today BrewBilt Manufacturing Inc., announced that California State University in Sacramento had approved to purchase the $400,000 BrewBilt system as a part of their upcoming new Craft-Beer Brewing Program for students to be certified in the business of craft brewing.

Sounds like a great deal for a $1m market cap company that has, over the last six weeks, fallen from $0.09 to $0.005 per share. That drop came despite this amazing news two days ago:

Today BrewBilt Manufacturing Inc. announced $2.4M in 9 new breweries the beginning of this quarter in California, Vermont, Maryland, New Hampshire, Virginia, and Texas.  [..] [Chairman] Jef Lewis further stated, “At this pace we anticipate meeting our $25M projection in 18 months instead of 36 months, while reaching our 60 months $200M projection much earlier. We are now having discussions with the worlds largest beer producer who has interest in our systems for their IPA Europe projections.”

It would appear Brewbilt is lying. It hasn’t sold a system to CSU (according to CSU), and we suspect the reason Brewbilt hasn’t announced who they’ve actually ‘sold’ 9 new breweries to is, they haven’t actually sold 9 new breweries at all. It’s the same reason they’re telling you ‘the world’s biggest brewer’ is in discussions with them, but they don’t name them.

PS: The world’s largest brewer is Anheuser-Busch InBev. That they’re not named in the news release above specifically, but they’re alluded to in a way that would reveal them, is the sort of scammy move most respectable pubcos don’t try to pull.

Going back through their previous news releases, you find a lot of claims that stink of bullshit and are easy to pierce.

BrewBilt is one of the only California companies that custom designs, hand crafts, and integrates processing, fermentation and distillation processing systems for the craft beer, cannabis and hemp industries.

A simple google search found around 12 in California, dozens more in other states, but do go on.

BrewBilt is bulging at the seams and will need to find additional manufacturing space to keep up with the purchase orders.

So much success! In fact, the company is supposedly doing so well that the Chairman has authorized a stock buyback program! That should really put a charge in the stock!

Oh. This is the actual Brewbilt stock chart: 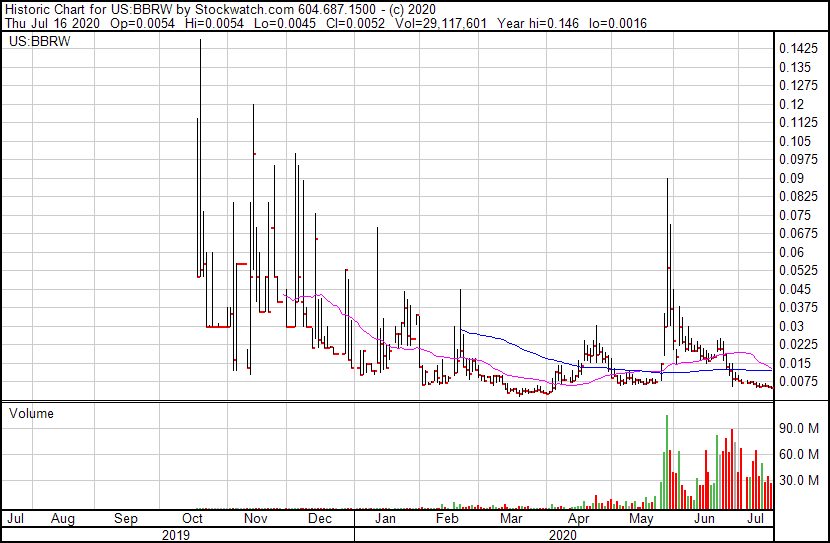 Yes, that’s a whole lot of selling while they’re supposedly doing these amazing deals and buying their own stock.

So much selling in fact, that they’re nestled up against the magical half cent per share barrier, even though $2.4m in new breweries would be more than double their current valuation.

We do know that Brewbilt Chairman Jef Lewis does actually build brewery equipment, and has for some time. That much is true.

Jeffrey Lewis IS Brewbilt. When the company rolled into what used to be a CBD pet product vehicle that lost a ton of money, the merger deal saw $5m in stock to go to Brewbilt, specifically noted to be in Jeffrey Lewis’ name.

As consideration for the IP, fixed assets and the “Know -How”, the Company shall issue, or cause to be issued, $5,000,000 worth of Preferred Series A Stock (PAR $.001) within thirty (30) days from the date of the agreement. The number of Preferred Series A shares to be issued is 500,000 shares at a price of $10.00 per share and convertible pursuant the conversion rights as specified in the Articles of Incorporation and certificate of designation for VTNL. BrewBilt has designated that the said stock be issued in the name of its President, Jeffrey Lewis.

In March, while apparently ‘bursting at the seams’ with orders – so many that they were going to need bigger premises soon, the company posted financials that, well, weren’t so hot, including having just $620 in cash at hand and $665k in current assets, along with $8.8m in total liabilities.

No wonder nobody is around to answer the phone.

We suspect that financial mess and the downward pressure on the share price compelled management to take the awkward step of actually naming one of their supposed buyers, to give themselves a little credibility.

Alas, it also compelled them to show their hand and demonstrate they’re holding 2’s and 7’s.

I guess we could be wrong. I mean, how can this be so cheap when learned non-scammy people like this are out there telling you to buy it? 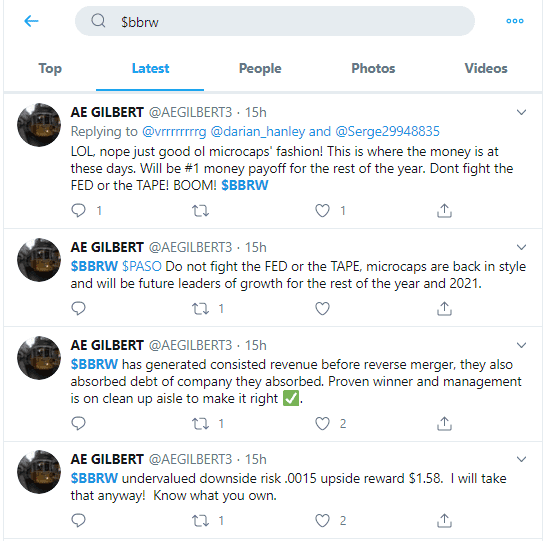 Knowing what you own would be easier if they answered the fucking phone, Gilbert, and if they weren’t seemingly lying in their news releases. 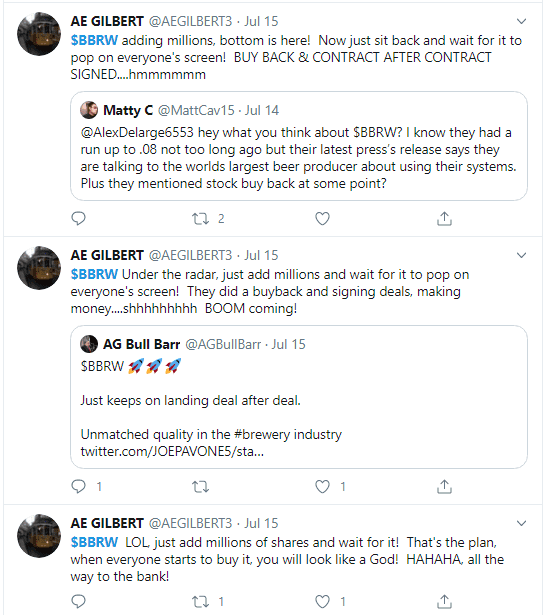 Hot tip: When you Twitter search a ticker symbol and the same guy comes up again and again, multiple times a day, banging on about the same old shit, it’s either me beating the tar out of ImagineAR (IP.C), or it’s a paid-for homer pumping helium into a dead ticker.

This ImagineAR app is amazing! Look what I created in minutes! $IPhttps://t.co/FrIfBlcqDP

Brewbilt is a real company that does make a product, but it doesn’t appear to be a profitable one, and it’s also one that has transformed apparently into what stanks of a market scam seemingly intended to pump a few financial breaths down the boss’ throat before it all goes away.

In Canada, that would mean it’d be a shell company going forward. But in the US, where the OTC allows stocks to trade downward until they hit fractions mathematicians can’t name, the pump just keeps playing out until the SEC wakes up to it, with traders happily riding moves from $0.0001 to $0.0002 as some lonely grandpa in Palookaville gets a cold call warning him the stock is heading to a buck and unloads his ‘keep me out of eating dog food’ savings.

I side with grandpa.

FULL DISCLOSURE: No commercial attachment to the stock. Thanks to the tipster who started the ball rolling on this investigation. Apreesh you.