Goldman Sachs (GS) Best Earnings Result in Years after Revenue from Trading up 93%! 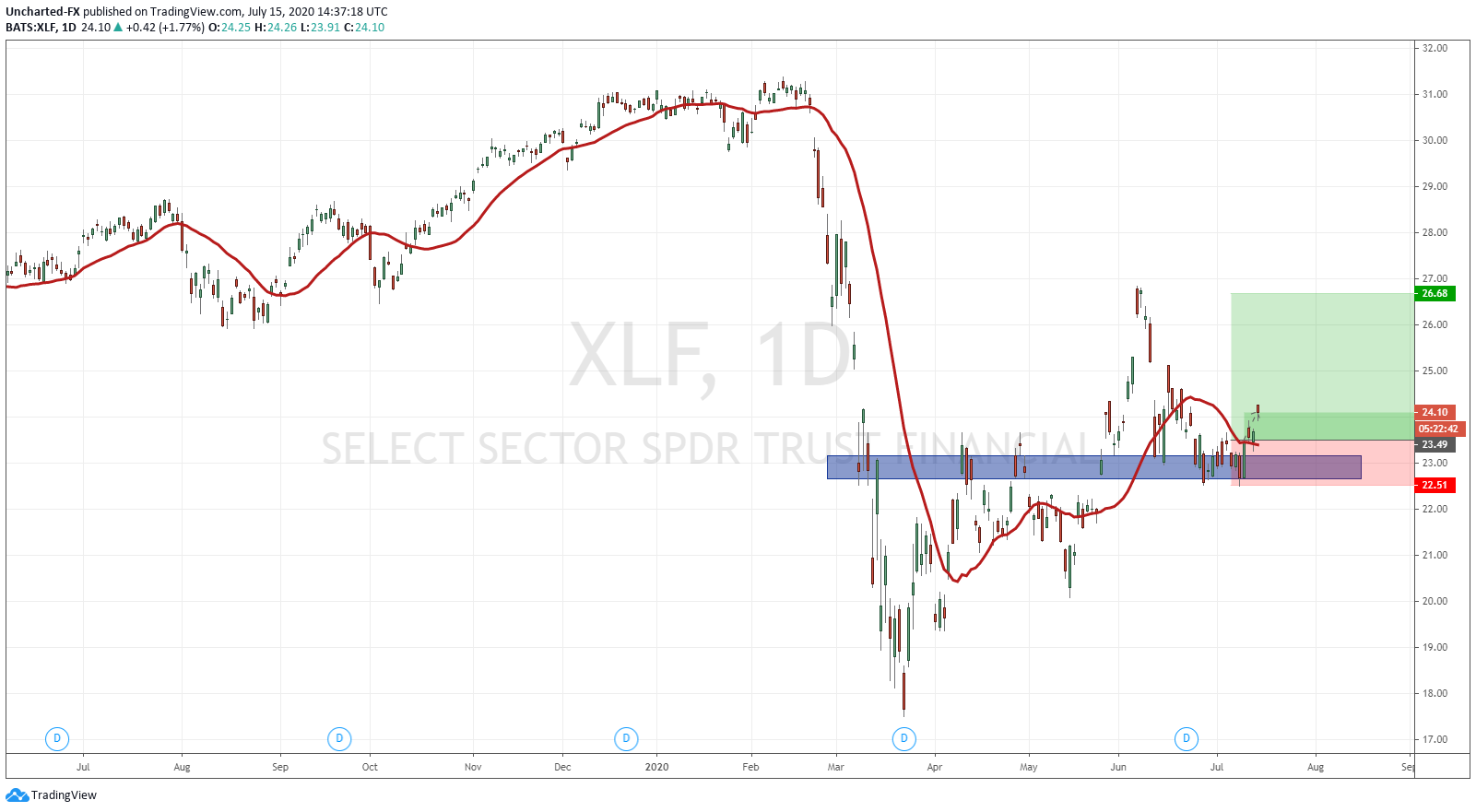 With earnings season starting this week, many Wall Street analysts have been expecting the worst earnings in recent history. Traders and market participants have been placing bets on how this would affect markets. To be honest, many would be shorting the markets with analysts expecting poor earnings. The question really is whether the markets have ALREADY priced in bad earnings. In the past, we did see Airline stocks and Cruise line stocks drop leading up to earnings. When earnings came out, the stocks did not continue to sell off, in fact they continued to range before moving higher. This is a good example on how earnings and other bad news have already been priced into markets. 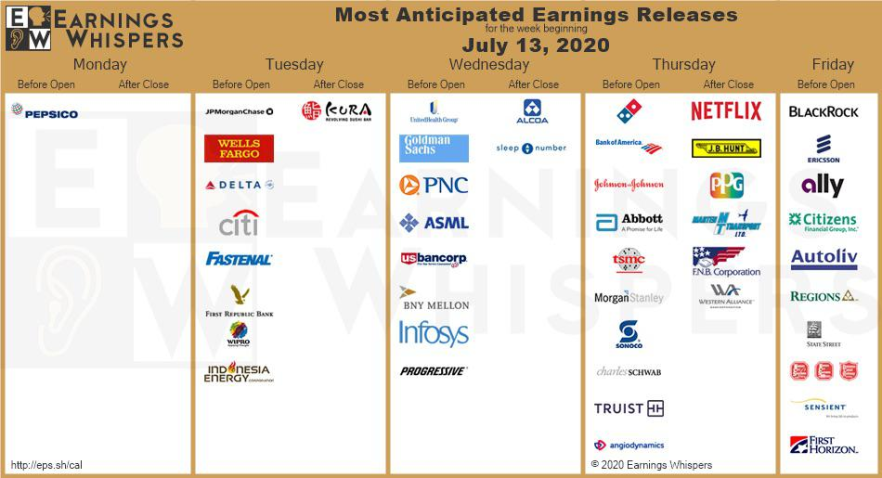 For me, I am looking forward to Tesla’s earnings next week Thursday. The stock has been in monster rally mode. Now has this been people pricing in perhaps spectacular earnings next week? Or is it really the Robinhood new money crowd day trading the stock? If it turns out to be the latter, oh boy, negative earnings could lead to a major sell off. In comparison, Netflix has also been making new all time highs. Their earnings come out tomorrow. This move up has priced in good earnings. Now we will see how good they are. Will they beat expectations by a large amount?

The big earnings story for this week has been the bank stocks. Knowing that next quarter, banks will have limits on dividends and share buybacks imposed on them by the Federal Reserve, it adds more drama to this situation. Bank stocks have been favourites for investors due to their solid dividends and share buybacks from bank profits. This could change for some banks heading into quarter 3. However, we shall see that trading the markets have been very profitable for the banks…and has balanced out the loss in their consumer lending business much more than we could have expected. This is largely…well not largely but a fact that this occurred due to the Federal Reserve stimulus efforts…and some would say REPO efforts, which could have provided banks with more money to buy stocks and bonds.

XLF is the ETF to play the financials. With a technical approach, we could have deduced that some bank earnings would be a surprise , and would have had a great risk vs reward trade. XLF has been back retesting the support zone at 22.60. In fact, we ranged and based at this zone for about two weeks, and have seen action here for about 3 weeks. A key zone. On July 10th, we printed an engulfing candle here. The engulfing candle is one of the favourites for traders and technical analysts because its signal is obviously clear. Very strong price action, in this case buying, which engulfs the previous candle of the opposite colour AND occurs after a downtrend. That candle alone was a signal to go long with a stop loss below, and with the first take profit target to at least the 27.00. A good 1:3 risk vs reward ratio. 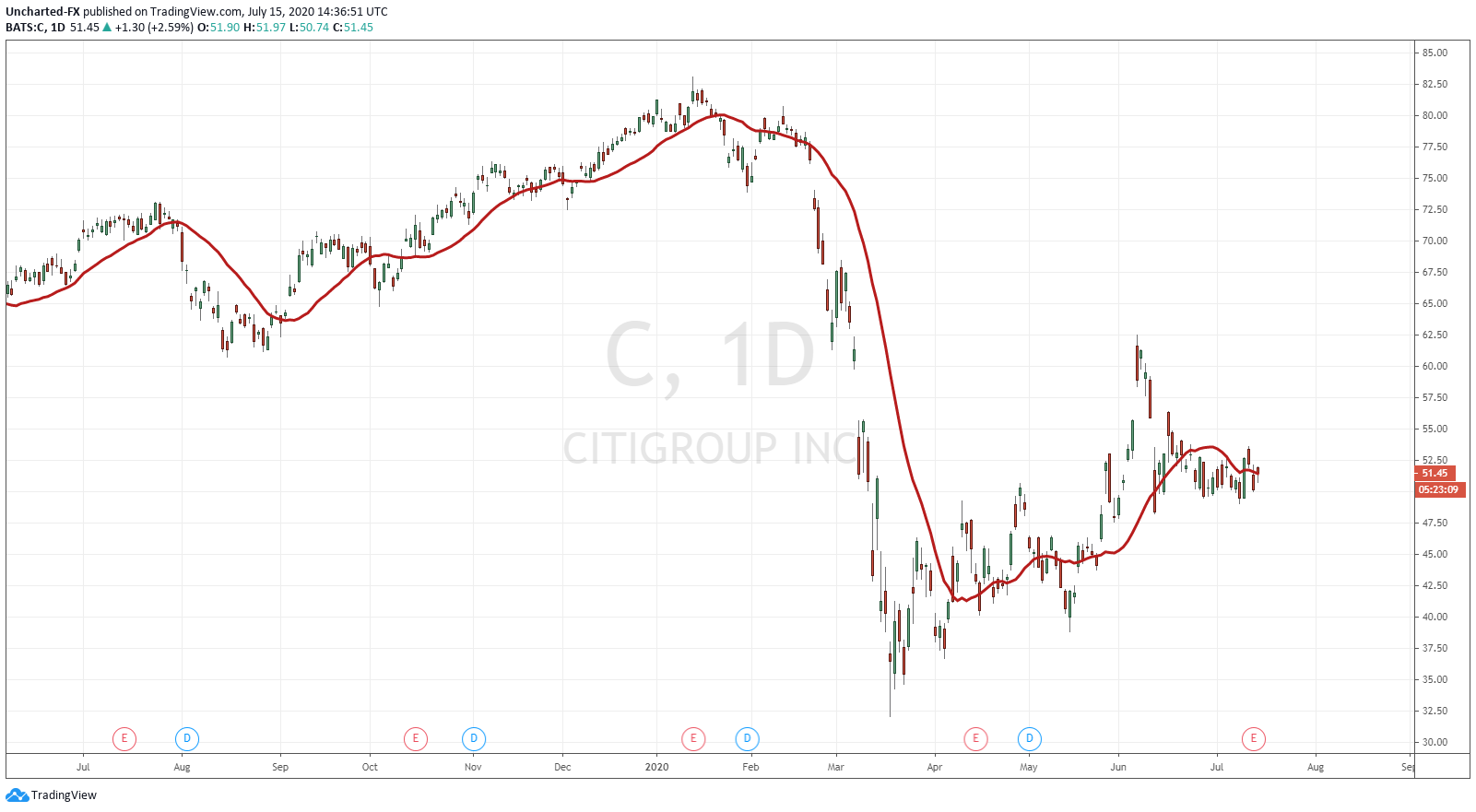 Onto the individual bank stocks. You are going to see that a lot of them look similar to XLF. Citigroup is at support still after earnings that beat revenue and profit expectations on strong trading which offset a slowdown in consumer banking.

“Revenue increased 5% from a year ago, reflecting higher revenues in fixed income markets and investment banking. Net income was 73% lower on the year, driven by a substantially higher allowance for credit loss reserves due to the pandemic recession.”

Here are the key numbers versus what analysts surveyed by Bloomberg expected:
Revenue: $19.8 billion reported versus $19.2 billion (expected)
Adjusted earnings per share: 50 cents per share versus 38 cents (expected)
Net income: $1.3 billion reported, down 73% from the previous year

Markets and securities revenue rose 48% to $6.9 billion during the quarter, mostly driven by a 68% jump in fixed income. That offset declining Global Consumer Banking revenues that took a hit as spending slowed due to the coronavirus pandemic — revenue fell 10% on the year to $7.34 billion.
Net credit losses jumped 12% from a year ago to $2.2 billion. Citigroup’s allowance for credit losses on loans was $26.4 billion at the end of the quarter, or 3.89% of total loans, compared to $12.5 billion, or 1.82% of total loans, a year ago. 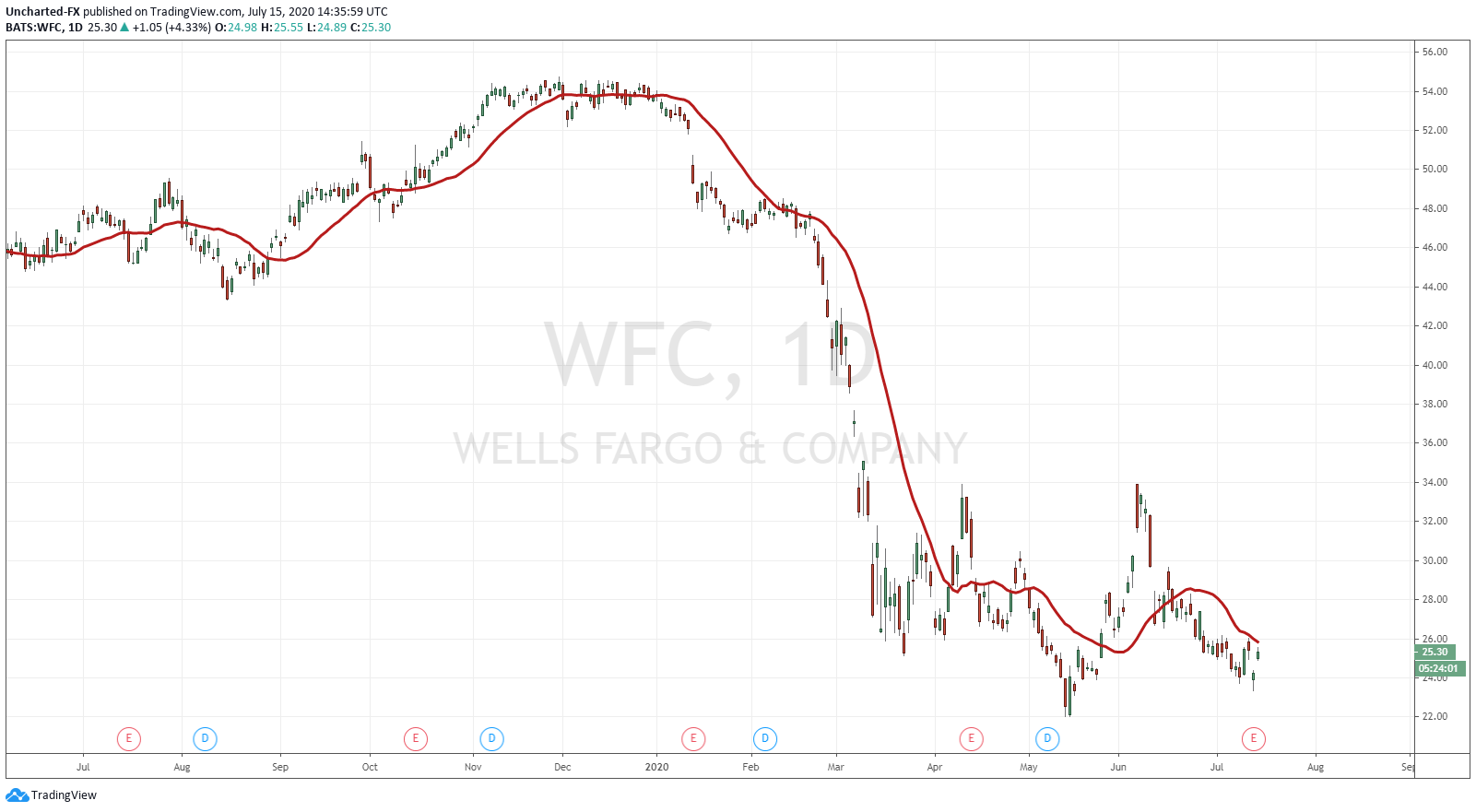 Wells Fargo was a different story. The chart even looks different than other financials. It is holding support at these levels, and I was thinking this set up could lead to a head and shoulders pattern. We shall wait and see for that. But on the earnings side, the bank seems weaker than its peers. Wells Fargo on Tuesday posted its first quarterly loss since the Great Recession as the bank set aside $8.4 billion in loan loss reserves tied to the coronavirus pandemic.

The bank had a net loss of $2.4 billion in the second quarter, or a loss of 66 cents a share, worse than the 20 cents a share loss expected by analysts. Revenue of $17.8 billion was also weaker than analysts’ $18.4 billion estimate. Wells Fargo is also cutting dividends from 51 cents down to 10 cents indicating a pessimistic outlook for the year. 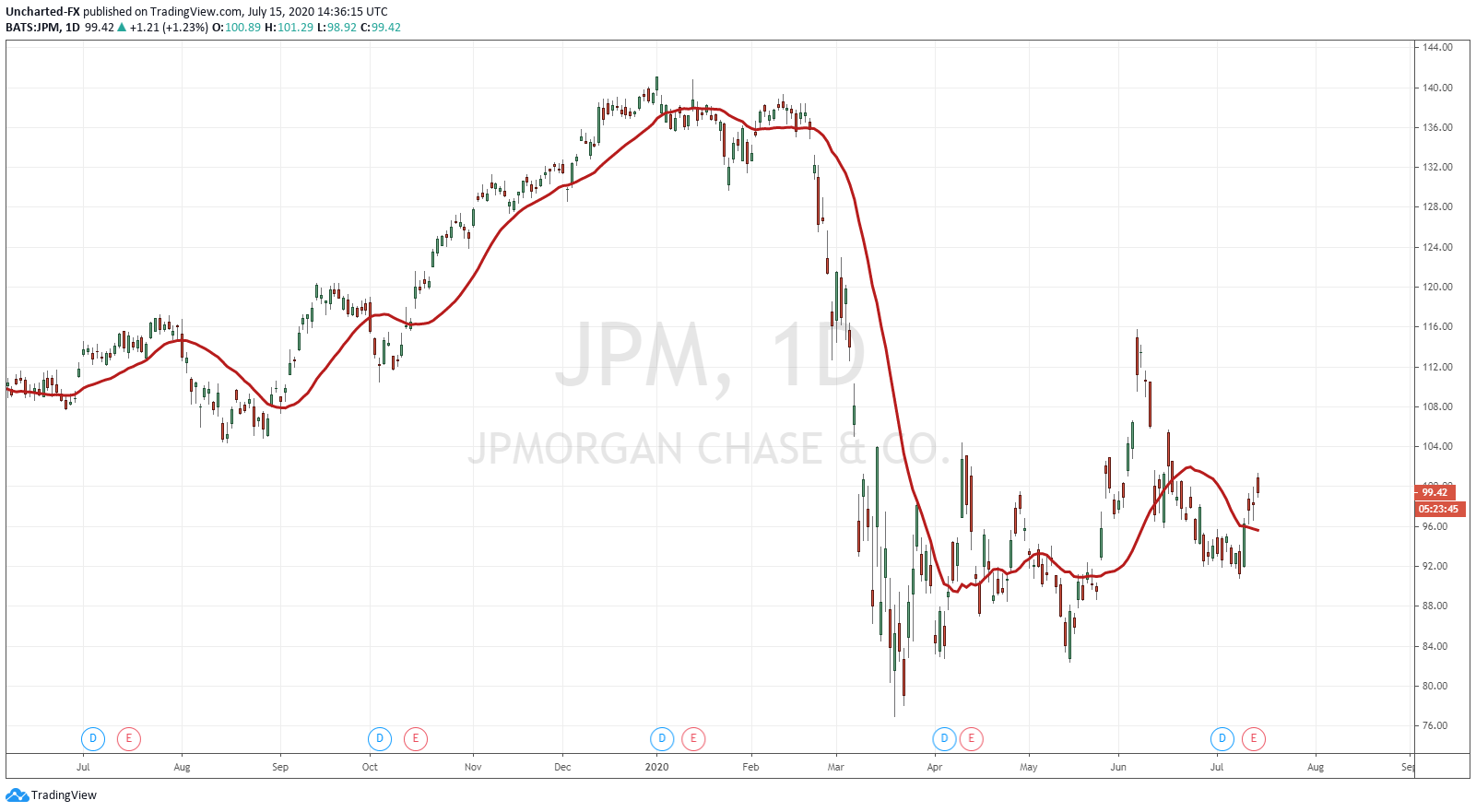 The chart of JP Morgan looks like the XLF but with a much deeper pullback. A tricky chart to trade and to be honest, would not be something I would trade. Investment for the long term is a different approach. JP Morgan with record trading revenues which beat expectations. The bank posted earnings of $4.69 billion, or $1.38 a share, exceeding the $1.04 per share estimate of analysts. Revenue of $33 billion exceeded the $30.3 billion estimate.
Bond traders posted revenue of $7.3 billion, a 120% increase from a year earlier, crushing the $5.84 billion estimate of analysts by almost $1.5 billion. Equities traders posted revenue of $2.4 billion, beating the $2.07 billion estimate.

The retail banking division, however, posted a $176 million loss, compared with a $4.2 billion profit a year earlier, driven by the addition of loan loss reserves. 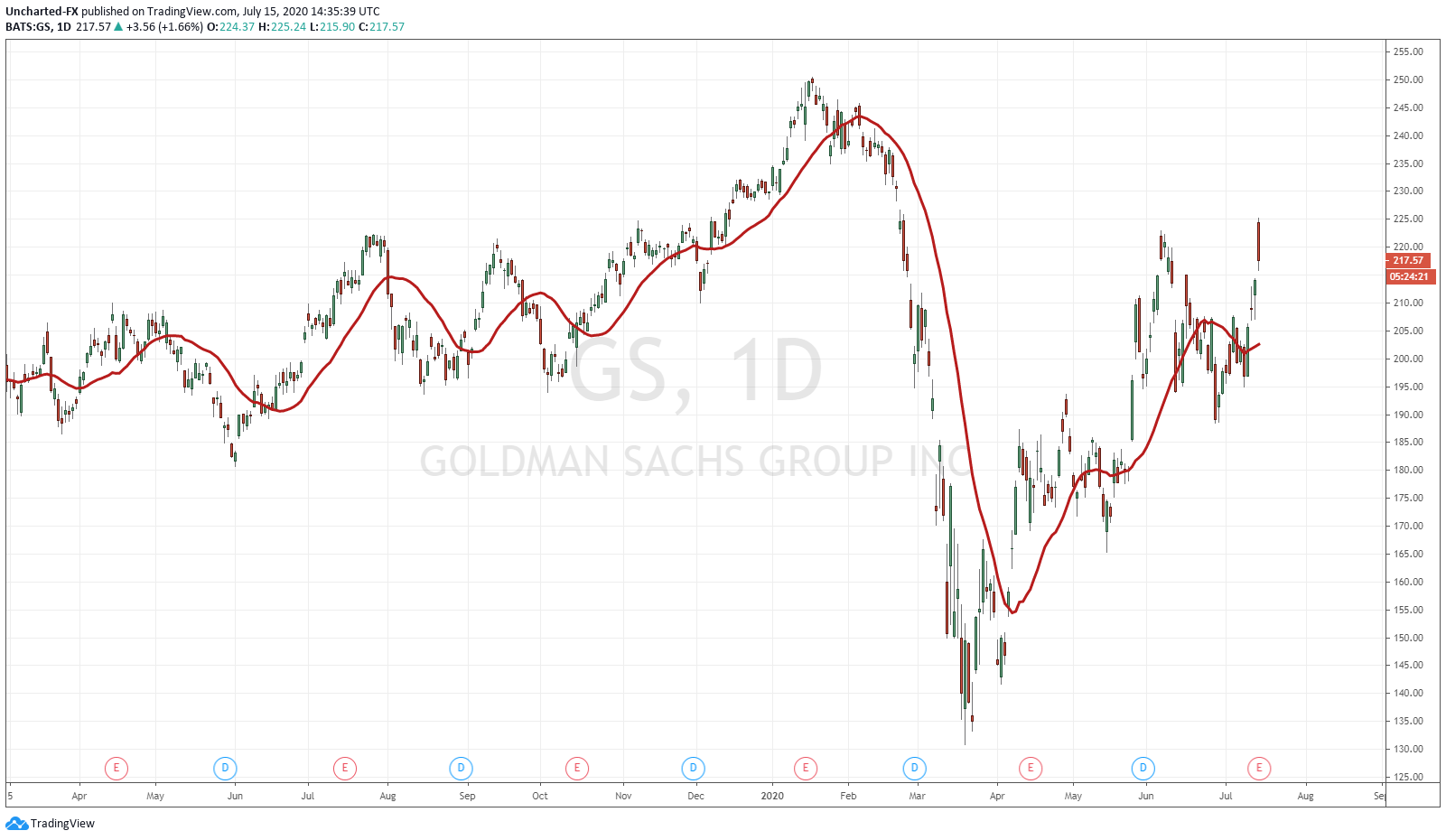 Finally, the big story of today is Goldman Sachs earnings. Revenue from trading stocks and bonds surged 93%, surpassing what analysts had expected by about $2.5 billion and mirroring similar gains reported Tuesday by JPMorgan Chase and Citigroup. The bank also raked in record fees from helping companies raise cash needed to weather the coronavirus pandemic. The firm’s fixed-income trading revenue more than doubled to $4.24 billion, the highest in nine years, while the equity unit had its best showing in 11 years. The gains propelled revenue to the second-highest mark ever and net income to a slight surprise increase from a year earlier. Profit was $2.42 billion, or $6.26 a share, compared with analysts’ estimates for $3.95 per share. Revenue from underwriting stocks and bonds more than doubled to $2.05 billion, well beyond analysts’ average estimate of $1.3 billion. Fees from advising on deals for companies fell 11% to $686 million.

The key takeaway is that trading led to gains which took revenue up to the banks second highest mark ever. Let’s face it folks, the banks are too big to fail. Many suspicions about the banks being bailed out through repo, and then using this money to actually buy stocks and keep markets propped, seem to be coming out true. The banks are definitely playing the markets here, and do be careful. Especially the new Robinhood traders. These experienced institutional traders know there is a lot of new retail money playing the markets. They are setting a lot of traps, and this is why we have been seeing whipsaw days and fake outs in an attempt to shake out the weak and newbie hands. These earnings were not as bad as expected due to the banks trading business, and I think this will continue with even more stimulus coming. Lending will take a hit but who cares when revenues and profits are still coming in? What a world and time we are living in, and it all boils down to incredible market action and what is being done to keep them propped.