Today, The International Monetary Fund (IMF) released a statement predicting that the global economy will take a $12 trillion hit from the Covid-19 pandemic.

The 189-country organisation says it will take a minimum of two years for world output to return to pre-pandemic levels.

The IMF’s mandate is to “promote high employment and sustainable economic growth, and reduce poverty around the world”.

The membership criteria in the IMF is not very high.

Member countries include violent rogue states like the South Sudan.

Seven countries do not meet IMF membership standards, including Cuba, North Korea and The Vatican.

“The Covid-19 pandemic pushed economies into a Great Lockdown, which helped contain the virus and save lives but also triggered the worst recession since the Great Depression,” stated the IMF’s economic counsellor, Gita Gopinath.

Living standards for 95% of the world’s countries are predicted to drop this year.

Each of the G7 industrial nations had its growth projections revised down, in what the IMF calls a “crisis like no other” (the 2008 financial crisis caused a .1% drop in output). 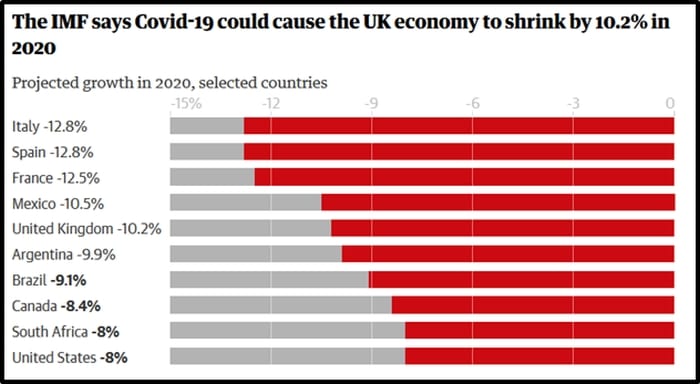 The IMF has noticed that – given these dire macro economic numbers – the stock markets are relatively cheery.

“The extent of the recent rebound in financial market sentiment appears disconnected from shifts in underlying economic prospects,” observes the IMF.

In an update to April forecasts, the IMF says it now expects the global economy to shrink by 4.9% this year, compared with a 3% drop expected in the spring.

What the IMF does not seem to have noticed is that the first wave of COVID-19 pandemic is still gathering steam in the U.S. – the world’s largest economy.

New coronavirus cases in the U.S. have surged in June and are now back to where they were at the peak of the outbreak.

While early hot spots like New York and New Jersey have seen cases steadily decrease, the virus has been hitting the south and west. Several states on Tuesday set single-day records, including Arizona, California, Mississippi, Nevada and Texas.

Meanwhile, China stomped on a new outbreak of the virus in Beijing, quickly mobilizing vast resources by testing 2.5 million people in 11 days.

Why is the world’s richest country doing such a poor job of containing this virus?

Weak leadership is one issue.

The U.S. President Donald Trump exhibits a basket of toxic traits: a self-confessed groper, the CEO of a fake charity, a liar who promotes violence, a tax cheat and a white supremacist and a COVID-19 denier.

Another issue is the intellectual dimness of U.S. citizens.

Americans have much lower IQs than the Chinese.

Almost 25% of Americans believe the corona virus is a biological weapon deployed by the Chinese government to kill Americans.

Hint to all Yankees: China is the producer, you are the customers; they have no incentive to kill you. 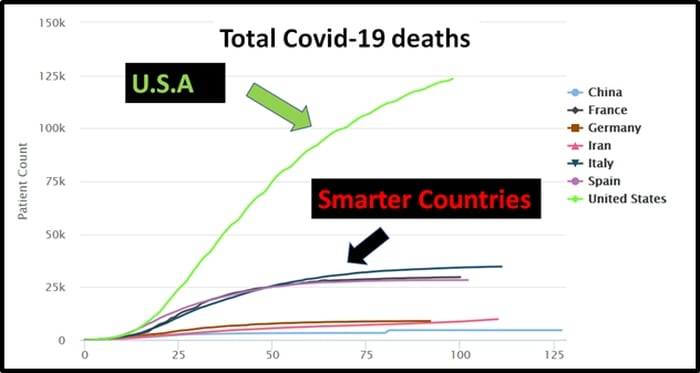 These two facts (weak leadership & low intelligence) are not unrelated.

When a 71-year-old man who has never committed a single altruistic act pledges to improve your life (“Make America Great Again”) – you should treat that skeptically.

We are not bashing Americans.  Individually, they are lovely people.  And they are very good at shopping – which generates a whopping 68% of the U.S. GDP.

In contrast, shopping accounts for only 54% of China’s GDP.

Given these gloomy numbers, how is the US. Economy still functioning?

In the last three months, the US Federal Reserve has printed a little over $3 trillion in order to counter the economic impact of covid-19.

If you’ve ever tried living off your credit cards, you know this story will have a bad ending.

There are three ways to invest in this bad ending.

Equity Guru employs one of the best mining writers on the planet.

We advise you to read Greg Nolan’s shortlist of producing and advanced stage ExploreCos (those with endgame potential).

On June 24, 2020 the IMF advised all countries “to ensure their healthcare systems are adequately resourced.”

This is a fancy way of saying: “Print more money”.

Full Disclosure: the writer owns gold equities. For this reason, his belief in the bullish “macro-gold story” should be considered biased.