India vs China: Battle for the World’s Most Precious Commodity 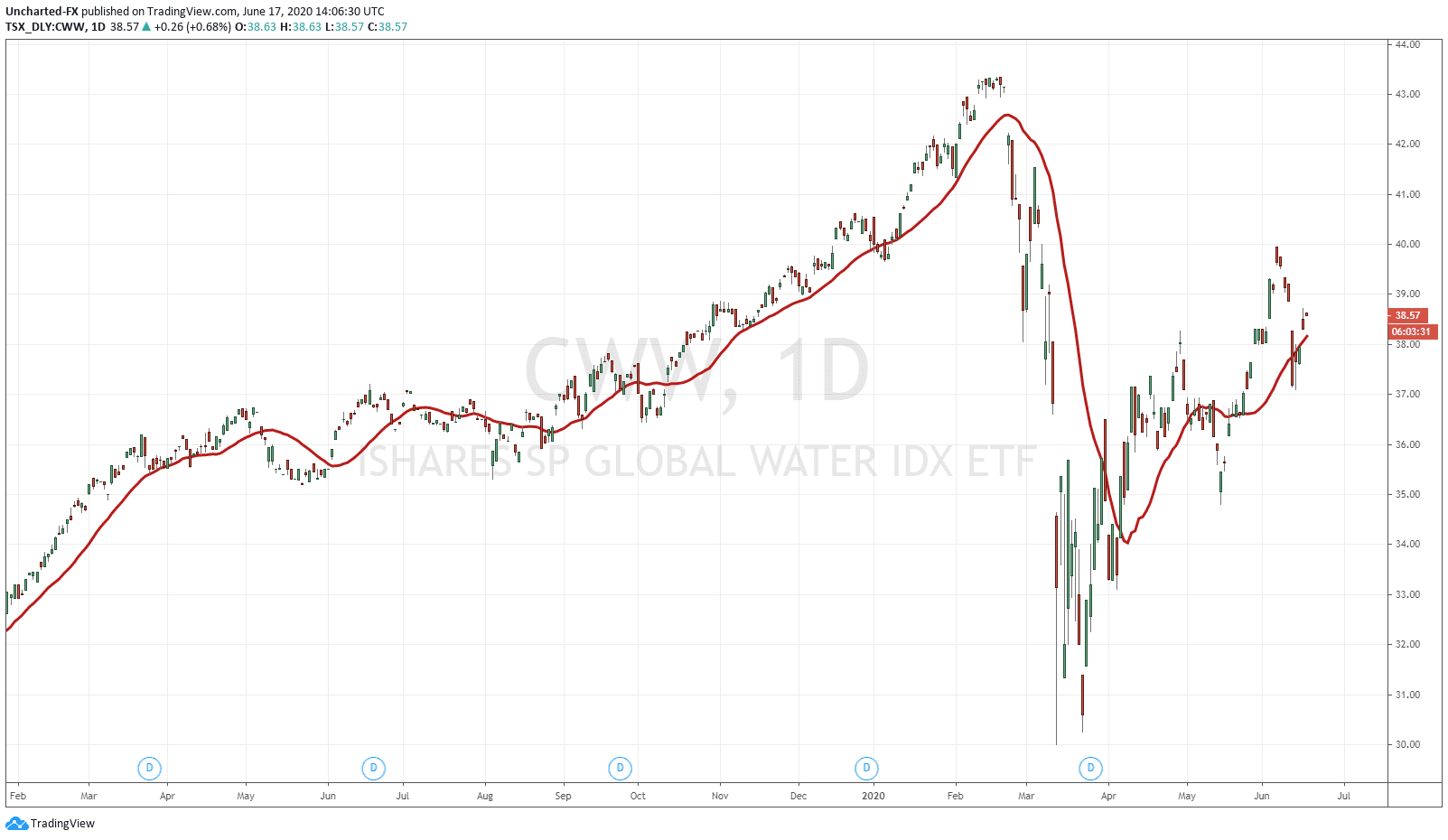 Markets closed green yesterday after a volatile Monday, but seemed to lose steam mid day. Even a record retail sales data print of up 17% for the month of May was not enough to continue the optimism of a V-shaped recovery. This could have been with a resurfacing of fears of a second covid wave largely in China, where Beijing has established lock down measures including the closures of universities and now cancelling flights. We had Fed chair Jerome Powell testify before the Senate which is continuing today. In my opinion he stayed with the script. Pledged that the Fed will do what is necessary to prop markets. It was bullish for the markets. On the covid front, we got news that the UK has approved the use of a steroid, a drug called Dexamethasone, which reduces the risk of death in the sickest of covid patients. Finally, we had the President sign an executive order on police reform to appease to the protestors and rioters. All looked well. A lot of this, barring the reemergence of covid cases, was stock market positive news. Why the subdued market reaction? Why the large sell off mid day yesterday, only to see a bid back up to the green?

My followers and readers know my thoughts on what will bring these markets down. A black swan event. That’s it. Well we may have gotten something not many were expecting. A skirmish between Indian and Chinese soldiers at their contested border which saw casualties. Yesterday morning, India said that there were 3 soldiers killed with multiple casualties. Then, this number increased to 20 with Indian media claiming 42 Chinese casualties. The Chinese have not confirmed any casualties, but claim Indian soldiers crossed into their border. The big shock was that even though this area has been contested by both countries, no bullets have been fired for 45 years. Prime Minister Modi has said that no bullets were fired, and it was actually sticks, bamboos and bats that were used… but it cannot be verified and contradicts many other reports. The last time bullets were fired was the infamous India-China Bhai Bhai (which translates to India-China Brothers! Brothers!) when India lost a border dispute against the Chinese which saw the Chinese cross over into Indian territory chanting that slogan, carrying white flags, surrounding the Indian troops and then taking them out. 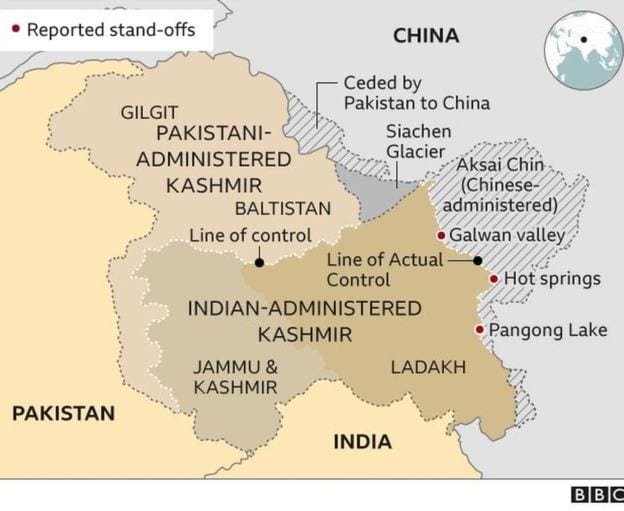 Ever since then, the Northern part of India, particularly the Ladakh region, has been contested by these nuclear powers. Things have been intensifying with India building roads and infrastructure in the area. But this is really for one thing. The most precious commodity especially for nations with over 1 billion people: fresh water.

The area both are contesting is because of the freshwater source in the western Himalayas. Many of you may not know, but India has already seen a water crisis in Chennai last year. The more alarming statistic is the fact that analysts have said that 21 cities in India (including New Delhi, Chennai, Bangalore, and Hyderabad)  will be running out of groundwater reserves by the end of THIS year. By the end of 2020. India has to act quickly to resolve this crisis as it is not known whether regular monsoon seasons will be able to fill up the reserves as the population grows. Military option is not off the table since the world is waking up to the fact that the Chinese Communist Party is not really interested in making cooperative agreements. They usually steal your tech or force their own labour in, as the Russians and Africans have found out.

To be honest, it is impossible to know the exact population of India. China is still the most populous nation in the world with 1.39 Billion, while India comes in at a close second at 1.35 Billion. Due to the lack of infrastructure and technology in many parts of India, it really is impossible to do a census for the country. I would bet the number is much larger and India possibly has already surpassed China.

As mentioned earlier, military options are not off the table. Even though Prime Minister Modi has come out saying the two countries have agreed to de-escalation terms, India needs water reserves. Many say that desalination is an option. The issue is the supply still does not meet demand. It is because as the Asian middle class emerges and grows, they want to consume more protein, generally meat, which requires a larger amount of water to process which I am sure many are now aware of due to plenty of Netflix documentaries on the topic. India should have started the desalination process a long time ago. The other option is creating weather patterns. Scientists can create clouds for rain. We saw the Chinese use this for the 2008 Beijing olympics. But this is something beyond the scope of this post. All I know is that human ingenuity will solve the water crisis.

The water index I follow is actually on the Canadian TSX. It is CWW. Investing in water has gotten more popular due to the sale of water rights in US states, and the fact that Dr. Michael Burry, from the Big Short fame and who shorted the US subprime mortgages in 2008, focuses on investing in water. Its holdings can be seen here. Water plays a large part in my personal long term investing portfolio. I focus on water treatment and even waste management technology. Some of those companies listed on the CWW are both Canadian and American and deal with that aspect.

So to me it seems that market action was a bit subdued yesterday due to this uncertainty. At time of writing, markets have opened slightly green and it seems that today will be a dull and choppy day. We did not see a run into Gold nor Bonds. Gold was slightly up, and is still under the zone that we are watching over on the Discord channel for a reversal and potential short trade. 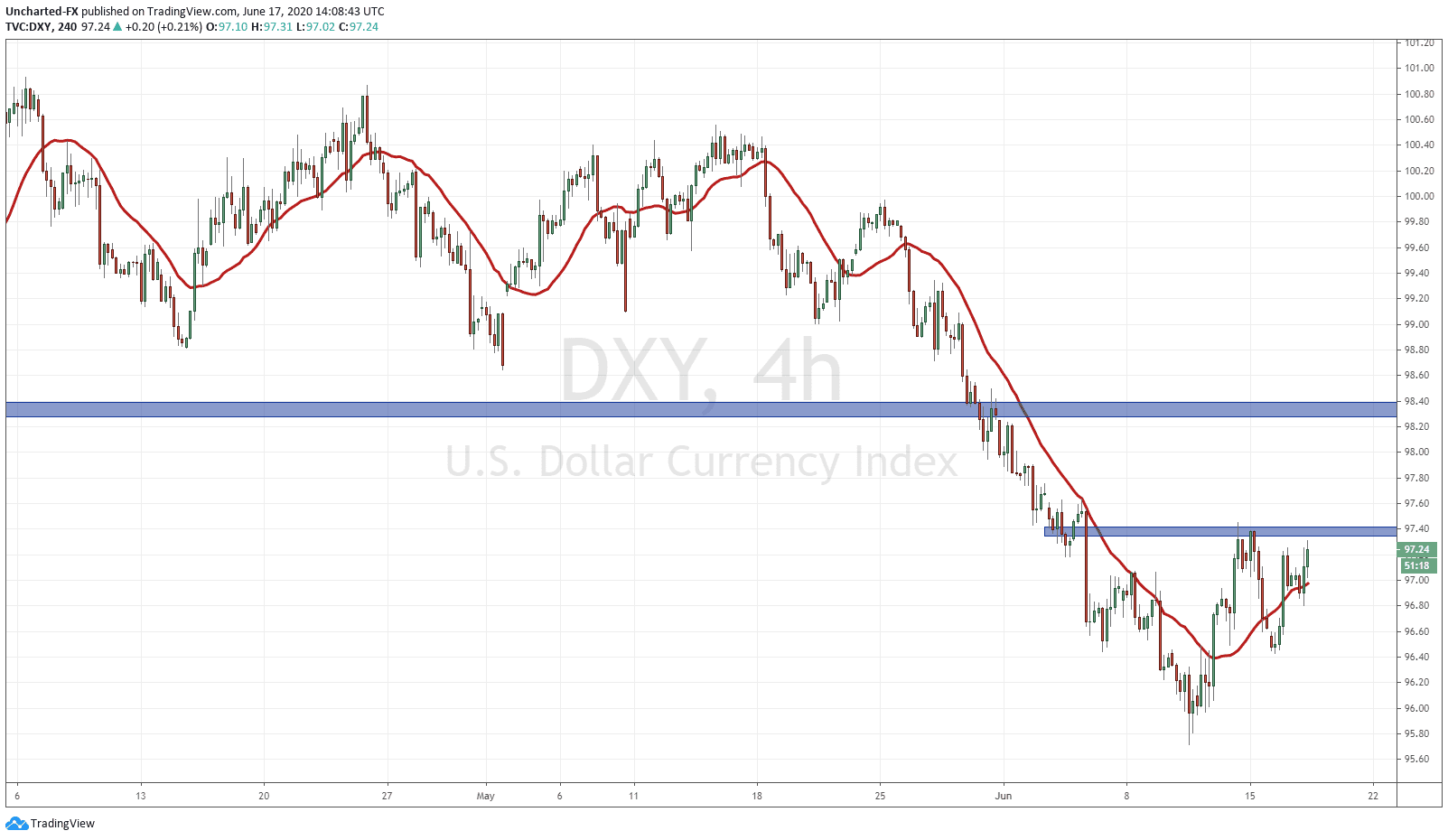 The uncertainty was much more present and obvious in the safe haven currencies. Particularly the Japanese Yen and the US Dollar. Just the currencies people run into when there is risk in the world. We saw the Yen appreciate BUT they yen pairs are still holding our market structure patterns for our long trades. The US Dollar was setting up for a head and shoulder pattern, but the neckline was invalidated and we saw a close below it indicating a breakout failure which I notified our members over on Discord. Bit of a pop today and I think this is more of a run into the Dollar for safety given the geopolitical risk. 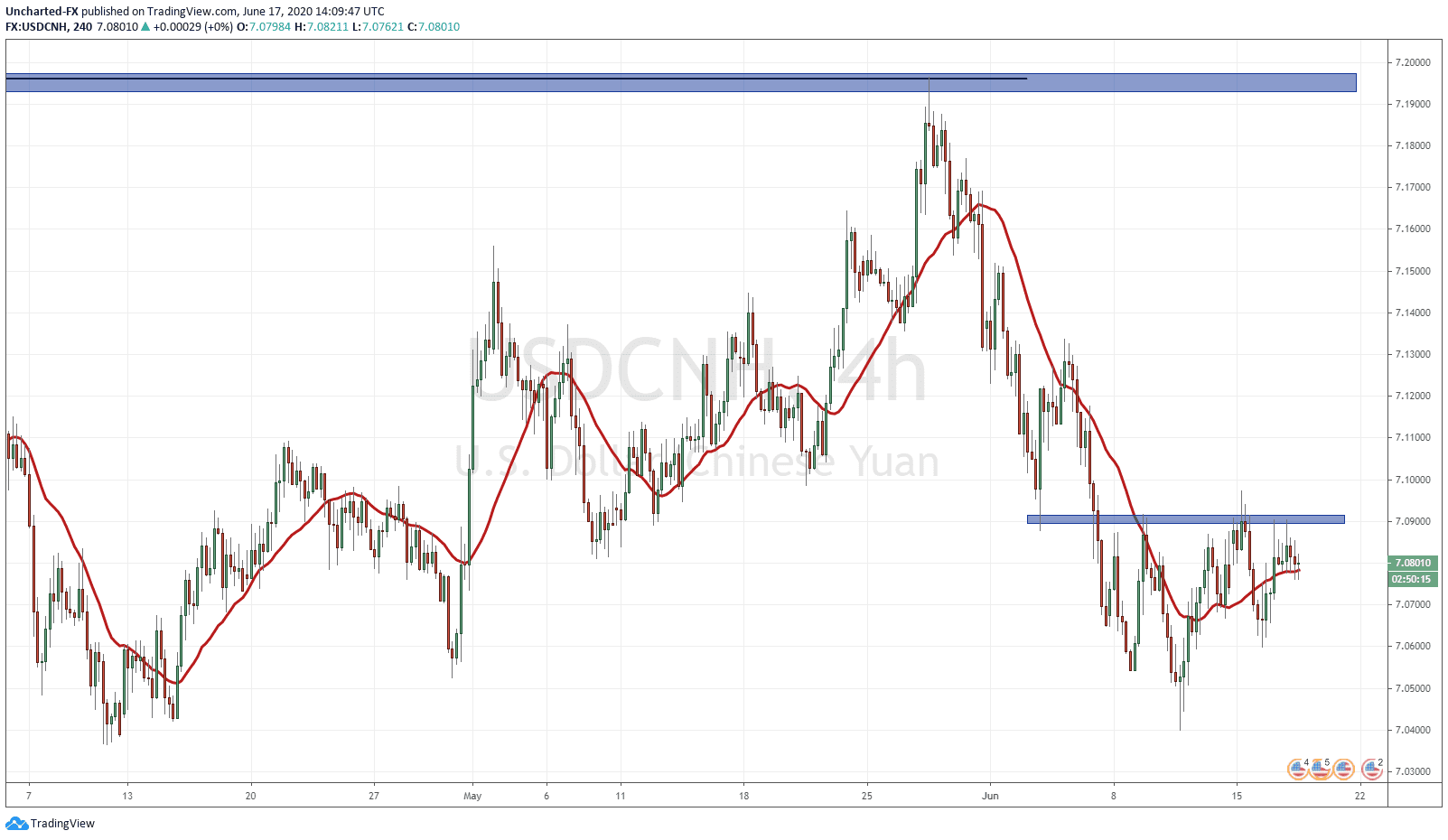 An interesting set up now is the USDCNH. The Yen is looking to depreciate here as there looks to be a bottoming and a head and shoulders pattern here. I would watch for a break and close above 7.09 to see if we see the momentum carry over.

In summary, even though India and China claim they have reached terms, this area will remain a hot spot in the world. Some geopolitical analysts say that this zone is actually more likely to ignite a war than the 38th parallel zone between North and South Korea. The price action in many markets indicates some fear and uncertainty due to the news of casualties. We will have to wait to see how this develops but I believe this was the blip in the equity markets and prevented a further move upwards temporarily.