Defense Metals (DEFN.V) is no stranger to these pages. We’ve followed developments every step along the way as the company aggressively pushes its strategic, wholly-owned Wicheeda REE Project further along the curve.

Wicheeda, located in the Prince George region of mining-friendly British Columbia, is road accessible with ample infrastructure all around. 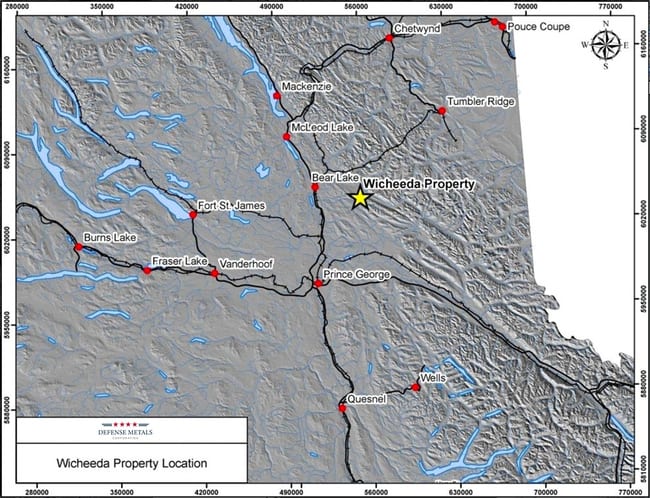 To briefly summarize what Wicheeda holds in its subsurface layers:

The above numbers, released only one month ago, represent a significant upgrade versus the company’s previous resource estimate.

This tremendous increase in tonnage and grade was the outcome of a summer-of-2019, 13-hole diamond drilling campaign that yielded some exceptional results: 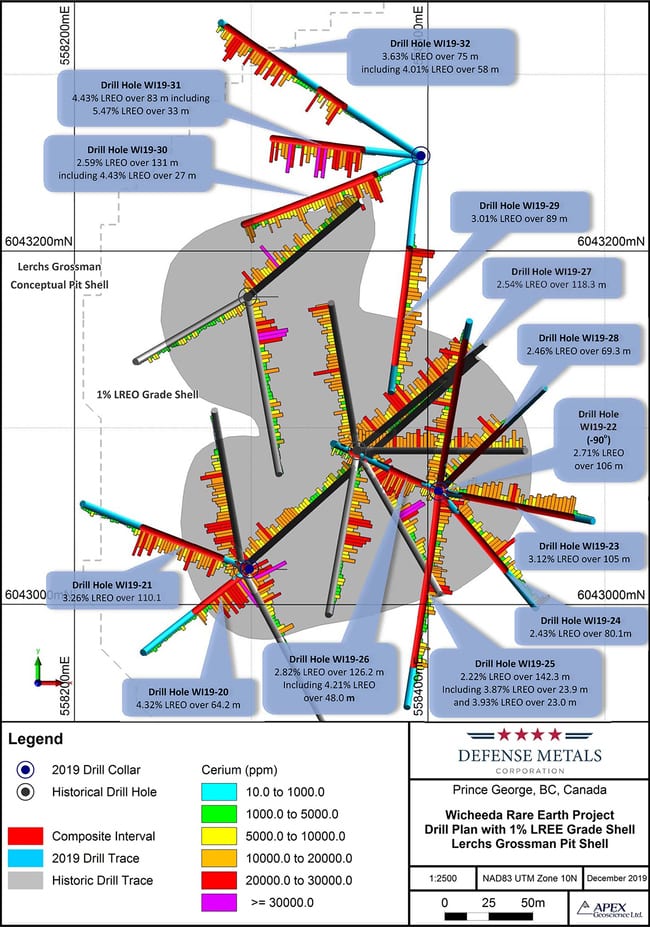 Four things to home in on regarding the above map:

For you mining types out there, Wicheeda is ranked plenty high among its peers, metallurgically speaking.

Metallurgy is the one aspect of exploration and development that can trump all others combined (it’s the science—some prefer the word ‘art’—of extracting valuable metals from their ores and modifying said metals for their intended use).

Still on metallurgy, on October 23, 2019, the company dropped news that de-risked the Wicheeda deposit in a major way.

Prior to this news event, the company was optimistically targeting a total rare earth oxide (TREO) metallurgical recovery rate of 80%, and a TREO high-grade concentrate of 40% from these tests.

These (final) numbers exceeded all expectations:

As noted above, these results place Wicheeda among the best REE deposits on the planet. 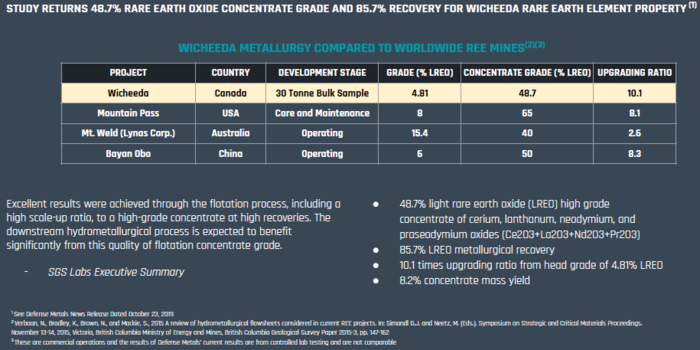 Some of you new to this space might be asking, “why should I care about an REE deposit, even if it is in a mining friendly jurisdiction like B.C.?”

REEs are everywhere in this modern world and are often referred to as the ‘Vitamins of Chemistry’.

Exhibiting an extraordinary range of electronic, optical and magnetic properties, they are used in everything from medical imaging technology, to flat-screen TVs, to nuclear power generation, to electric vehicle (EVs) batteries and motors.

“Just understand folks want it, for reals. You probably have some in your pocket right now, keeping your Candy Crush scores updated.”

The fact that China controls the REE refining market is another reason you should care. This market dominance is a big problem for the West, and it has us scrambling to secure alternative sources.

In order to add greater depth to the Defense team, the company recently announced a strategic hire in one Karl T. Wagner.

All of the above factors put Defense in a very enviable position.

It’s only a matter of time before the market figures it out.

But the company isn’t resting on its laurels. It has plans for the balance of 2020, and to that end, the company dropped the following headline late last week:

“Each FT Unit is comprised of one flow-through share and one common share purchase warrant. Each warrant is exercisable to purchase one common share of the Company at a price of $0.35 per share for a period of twenty-four (24) months from the date of closing the FT Private Placement.”

These funds are earmarked for its REE flotation pilot plant, a phase-2 proposal recommended by SGS Canada Inc.

Pilot plant completion is expected by the end of July 2020. Initial results are expected in August.

The objectives of this phase-2 pilot plant testwork:

In the video link below we get our first look at the pilot flotation plant as it currently exists.

The fact that SGS is involved adds heaps of validity to the Wicheeda deposit.

This is the real deal folks.

Keep in mind that Defense has 30 tonnes of REE rich material stockpiled above ground—material that was bulk sampled in early 2019.

“The pilot plant will treat up to 30 tonnes of material in a continuous manner over 180 hours of operation, at an anticipated feed-rate of approximately 150 kg per hour. The approach will be to first commission the circuit in mid-June. This will be followed by a series of optimization runs through later June / early July. A continuous 48 hour run will serve to confirm metallurgy over extended operation in later July.”

The second tranche of the PP is expected to close later this month. Those funds will get a drill rig mobilized to the Wicheeda project, a campaign that will infill the current resource, upgrading the Inferred material to the higher confidence Indicated category, as well as test for mineralized extensions to the North, to the Southwest, to the East, and at depth.

I expect newsflow to be steady over the balance of the year.

Full disclosure: Defense is an Equity Guru marketing client. We own shares.