Hertz Donut: The robbery attempt going down at Hertz (HTZ.NYSE) has been approved by a judge

The Greater Fool Theory is the single greatest driving force of the markets right now. Balance sheets can eat a dick. Growth potential is irrelevant. Past performance and profits don’t even rate. All that matters is, “Yes, I’m trading like a moron, but there are ten other morons who’ll buy my mistakes for more money so let’s pick up some bullshit!”

Usually, trading in an effort to game the rest of the market is a gamble – sometimes you’re the one left holding the bag when everyone else has already bailed. But, today, the Greater Fool routine is a gimme, because there’s been a million new Greater Fools minted recently, and they’re all absolute morons.

The COVID-19 outbreak saw the US government send everyone a $1200 stimulus cheque. For some, this kept their families fed. For teenagers living at home, it meant free money, and just enough of it to open a trading account at Robin Hood, the free US brokerage platform where millions of zero-hour-experience investors are acting like pack animals, chasing whatever is big this minute while hoping not to be the last one out before the bottom falls out.

The $HTZ move today (up 30% as of this writing) makes you think.

Stimulus kids are playing craps with house money, and using their profits to meme the markets rather than set themselves up an investment base.

Case in point: Hertz Global Holdings (HTZ.NYSE), which is bankrupt, has $19 billion in debt, and is drawing in so many retail investors through the commission-free Robin Hood online brokerage, its stock price has been going up in multi-baggers.

Damn it, you people are going to make me show you a Jim Cramer video.

Because Hertz has been meme-bought by investors to the point where it’s worth a billion dollars more than it should be, management have decided to sell equity in the company in a half billion dollar financing, with the specific aim to help pay their bankruptcy creditors down.

“Debtors now seek emergency relief from this Court to allow the Debtors to capture the potential value of unissued Hertz shares for the benefit of the Debtors’ estates.”

That’s bananas. That’s theft. Admittedly, anyone who buys in is a moron deserving to lose their money, but the nerve of these guys to even try to pull off a scam this brazen is mind-boggling. 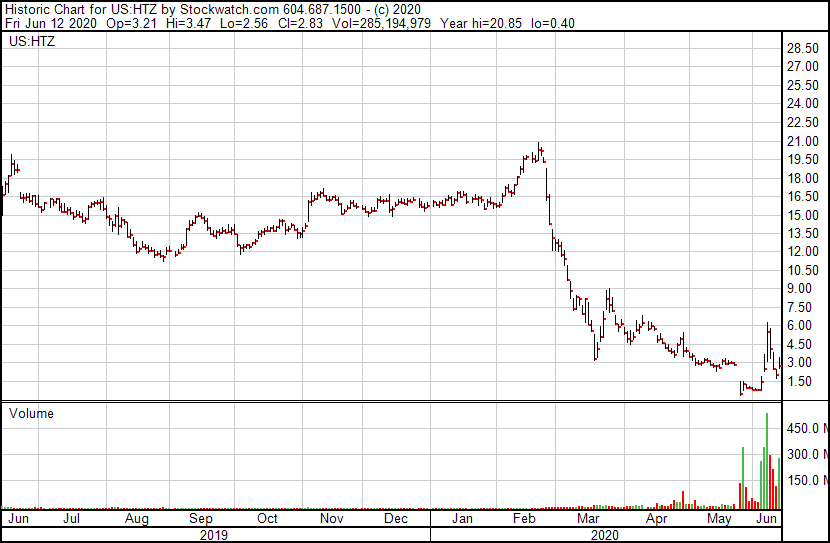 How could the SEC even allow it?

Well, the fact that the US Fed has been buying up corporate debt like a drunken Frankfurt penny stock player might be something to do with it. Currently, the Fed is looking like it’ll get little from its Hertz debt, but if the company sells worthless stock to traders for a half billion dollars (and the traders are dumb enough to buy it), the Fed and other debt holders can get something closer to a win.

Who are those other debt holders?

Those are senior debt holders, which means whatever money is juiced out of refinancing or selling assets or finding huge bags of coke in the tire well of an Escalade in Albuquerque, goes to them.

Not to retail investors.

Retail investors will likely get, at the end of the bankruptcy process, nothing.

And retail investors buying into this half billion dollar raise will get nothing – with a four month trade hold.

Which makes selling more equity in the company specifically to unsophisticated freshly minted investors an act of outrageous larceny.

I’ve seen some shady shit on the smallcap markets in my time, much of which would make a grown man blush, but the crap being pulled by Hertz right now has to be the most brazen case of stock exchange larceny yet attempted.

Jay Powell, the Fed and the SEC own the fact that $HTZ is going to knowingly try and sell $1bln in bankrupt equity to a bunch of retail patsies.

Shame on all involved.

THERE’S NOTHING TO SALVAGE HERE

The rental car business your grandfather thought was old and decrepit is on the way out, finally, and Hertz is stuck with half a million used cars scattered all over hell’s half acre that nobody wants because, let’s be honest, if we live in cities there’s nowhere to put cars anymore and, if we don’t, gas prices have us looking at buying a Leaf or a Volt or a Tesla, or just paying some other sucker to drive us around. Landing at the airport? Screw the rental desk, get an Uber.

And if we do need to rent, who the hell is going to Hertz?

What are ya gonna do, take out an ’87 Chevy for the weekend? Are you going to put it on your Diner’s Club card? Maybe empty your coin jar? Do you have anything in a wood side panel with pull out ashtrays?

This afternoon, Judge Mary Walrath decided the company could move forward with its hustle.

Buying stock in bankrupt companies is risky because the rules require that all bondholders, suppliers and other creditors must be fully repaid before shareholders can get anything back, which rarely happens. Hertz has pledged to alert buyers about their potential wipe-out.

“They’ve all been given the warnings. If people want to buy it, fine,” said Melanie Cyganowski, a former bankruptcy judge now with the Otterbourg law firm.

Hertz told the Wilmington, Delaware court it would warn buyers that “the common stock could ultimately be worthless.”

FULL DISCLOSURE: Not a holder of Hertz. Also not a holder of Blockbuster, Radio Shack, A&B Sound, Bre-X, Pan Am, and Tower Records, because I’m not a moron.