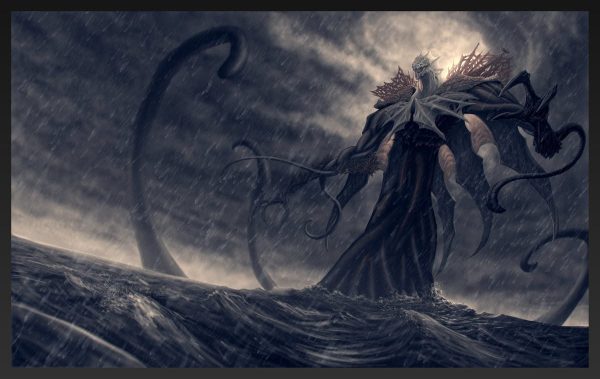 Watching the whales has a completely different meaning for cryptocurrency than it does for most of us. There’s no glass bottom boat where your Aunt Martha gets pleasantly tipsy on complementary wine while her kids wait with bated breath for a majestic orca to surface, blow air out his or her blowhole and disappear below the waves.

You’re going to notice some familiarity in the majority of these charts today and that’s generally because what happens to Bitcoin often has a ripple effect throughout the alts. (Minus Tether, of course.) So to understand why the other coin-charts are doing the same dance at Bitcoin’s, we have to necessarily understand Bitcoin’s.

The whales appeared this week like the biblical Leviathan in some second rate fin de siecle apocalypse movie, and the world trembled.

It relates primarily to big on-chain transactions. Bitcoin’s been around as a going-concern since roughly 2008, when teenage nerds in their mother’s basements were mining Bitcoin on their mother’s computers for fun. The block reward was 50 and they were worth fractions of a penny, and there was no idea that this was going to be anything more than a neat techno-fad which came and went. You could leave your mother’s computer on while you go camping, and maybe mine 250-300 Bitcoin. They were mostly hoping to maybe make enough money to order a pizza someday.

Obviously, Bitcoin didn’t stay there. There are lots of wallets out there full of bitcoin, and nobody knows if they’re alive or dead. Some people lost that money. Others sold it. Private keys went missing and wallets full of bitcoin have been lost forever. Occasionally, though, one of these whales wakes up and when that happens, it creates a ripple of panic through the crypto-sphere that they’re going dump their coin, and tank the price. It doesn’t help that Bitcoin’s history includes lots of tales of malicious entities liquidating stolen coins into the market.

On Thursday, one of those whales woke up and Bitcoin hodlers trembled. The mysterious wallet, itself full of stolen Bitcoin traced to  Bitfinex hack, moved 400 BTC (or $4.1 million worth of cryptocurrency) to unknown wallets. The transfers happened in 20 transactions and were noted by the crypto market community. A few investors then posed the rumour of a price dump and the bulls charged right out the door.

After which, the whales disappeared.

On June 10th, an unknown user or company sent $130 in Ethereum, and then paid millions of dollars in transaction fees.

On the Ethereum blockchain network, users can send and receive crypto payments or smart contracts by paying a fee to miners. Someone punched in the wrong set of numbers and poof went their ethereum.

Nowhere is the adage ‘a fool and his money are soon parted’ more true than dealing with cryptocurrency. The suggestion that cryptocurrency is unforgiving is an understatement so large it approaches absurdity. The problem is that most of it is automatic. If you accidentally mistype the amount of money you want to upload onto an exchange to buy crypto, and you put in $1,000 instead of $100, then you can anticipate losing a percentage on the withdrawal fee as a form of a stupidity tax. And that’s if you’re lucky. You want to pay attention when on these exchanges. But if you’re dealing one to one with another human being via some alternative method than exchanges and you type the wrong number, you can kiss the money goodbye. You will never see it or the other person again.

For the most part, Tether has taken over for XRP as the whipping boy of cryptocurrency. It’s not just that it’s centralized (although there is that) but because nobody’s really sure where the market cap bloat is coming from.

The pertinent criticism has USDT used to pump Bitcoin’s rise in 2017, and then claim that Tether maintains limited reserves and not enough to back the amount of coins out there. Both of those are absolutely correct. Then there’s the criticism that the company behind Tether is printing the stablecoin without any real buyers with the intended consequence being inflating Bitcoin’s price.

Then there’s the results of a report sent to Decrypt indicating China’s involvement.

China doesn’t want their citizens owning Bitcoin, but it’s not exactly banned. Instead, they banned exchanges. Naturally, this led to companies leaving China and starting up shop. It also didn’t stop Chinese hodlers from getting their Bitcoin—they used virtual private networks (VPN) and shut their mouths if they knew what was good for them.

But another contingent decided to do something else entirely, and change currencies. Instead of BTC, they bought USDT, and in droves. Yet, the prospect of USDT whales surfacing isn’t enough to send BTC’s price into a tailspin.

“Our key point is that 1) OTC is an enormous market in China—far bigger than people think, and that 2) USDT is the crux of that flow,” said Matthew Graham, CEO of Beijing-based Sino Global Capital.

Last week the C-suite team over at Ripple went to Brazil to chat with the Brazilian government about something remittance related. That was about the extent of the news released about the meeting. They were there. They were chatting. Maybe over mimosas.

“We extend these services now to more and more corridors typically exotic corridors with lots of challenges, like [the] Philippines [and] very soon within Brazil, so let’s say there is a big agenda and roadmap on that,” according to Marjan Delatinne, head of global banking for Ripple.

Ripple would ensure instant cashflow in a much cheaper fashion than those employed by banks and traditional fintechs through their On-Demand Liquidity technology. Folks using RippleNet can use XRP as a bridge between two currencies, and make the transaction in three seconds, ensuring payments are quickly sent and received in the local currency on either side of an transaction.

We’ve heard this before.

If this goes live, it could actually fulfill XRP’s promise of being the remittance coin, instead of the laggy digital redheaded stepchild of the crypto-world.

In addition to the chart down below, this week’s commentary on BCH will include its year-to-date performance when compared to Bitcoin. It’s present as a relative argument for buying Bitcoin over Bitcoin Cash.

As you can see, comparatively, BCH, with its promise of greater scaling and retail applicability, is not a greater speculative bet than its predecessor. The promise of BCH is that someday it will be able to be used in retail stores to buy your morning coffee, or get your lunch from a vending machine. But these are few and far between and virtually unknown outside of Asia.

Until we can wander down to our local 7-11, buy our slurpee, our corn dog, and a Pepsi from a vending machine with Bitcoin Cash, this will remain nothing more than a second-rate Bitcoin—not even valid as a store of value given its consistent poor performance.