Blast from the past: Vodis (VP.C) finally debuts its first Canadian harvest after several years of leaseback bingo

When we first heard of Vodis Pharma (VP.C) it was a tiny group that couldn’t get its unlicensed Delta BC-based cannabis facility looked at by the feds, several years ago. Lurking about in the background of meetups held by the myriad of grey market folks also in their position to discuss what their next move should be, Vodis had its own quiet solution to the delays; US leaseback schemes.

While it wasn’t legal for foreign companies to own US-based licensed cannabis grows, it was legal to rent them premises owned by that foreign entity. So Vodis and others opened large US spaces with all the modern conveniences and invited locals to use them, for a rent of 90% of their ensuing revenues.

As a temporary means of keeping your shares traded, I’ve seen worse. And the execs running the show at the time made great sport of saying a legal Canadian license was only a way to lose money anyhow, so they were okay with Delta sitting empty.

But we all understood the reality, that Vodis wouldn’t be a big player until they could spread their wings legally in Canada. The stock chart reflected that reality. 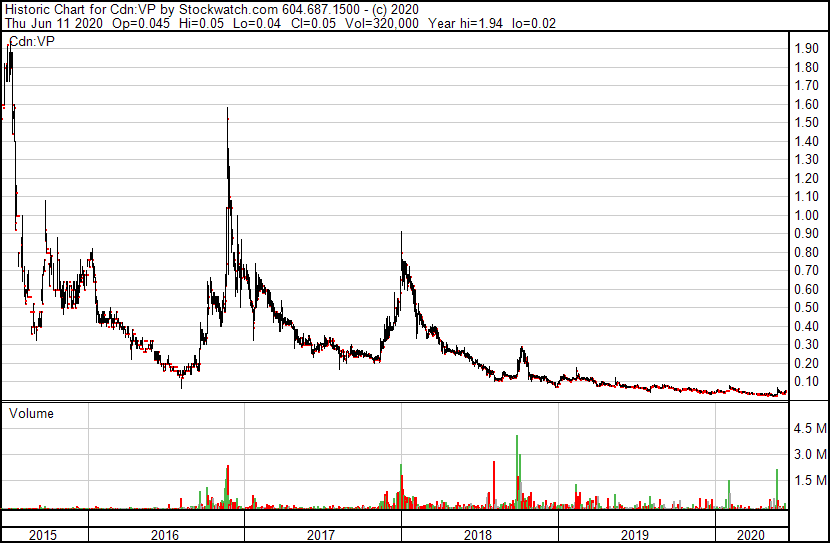 In February they finally got the nod from Health Canada, set the US operations adrift, and quickly set about planting in their 12k sq. ft local facility.

This wouldn’t generally warrant my attention, but the company just announced their first harvest, and I’m digging their approach.

As a small-batch, craft cannabis producer, the Company is focused on offering Canadian consumers unique products that are not currently found in the legal recreational cannabis market. The Company’s dried flower products are hand harvested, hang dried, and hand trimmed for the most discerning cannabis consumer.

I’m less interested in the soil than I am the unique products.

Upon licensing earlier this year by both Health Canada and the Canada Revenue Agency , the Company began cultivation of 37 varieties to test the optimal conditions in the facility suited to each of the proprietary live cultivars.

The legal market has created many new cannabis users in my social circle, and a large number of them have progressed from ‘Sure, I’ll take an edible’ to ‘tell me more about this Double Dank Triple Sprinkles.’

Unique strains are a marketing point in an industry where marketing is made almost impossible by law. If there are 30 companies talking about their AK47, being able to pull out your ‘Ginger Cheeseburger Chemdawg‘ in response is at least intriguing.

To be clear, Vodis are not the first company to go in the unique craft premimum direction. GTEC Holdings (GTEC.C) has been working on some novel strains recently, as an example, but I like the process of trying a litany of different products in your grow conditions over some time, rather than rushing to market with some trash ditchweed with ball hairs hanging off the side that you bought cheap out of WeedMD’s bargain bin.

Another point that should make some potential investors’ hair stand up is this, tossed in at the end of the most recent Vodis news release:

The Company has also begun the process of applying for a Dealer’s Licence, which would allow it to utilize its Level 8 vault to possess, distribute, and sell psychedelic substances to support Canada’s emerging psychedelic market.

Cheap attempt at tacking onto the back of another sector’s headwind or genuine business model. You decide.

Before the license dropped, Vodis had trimmed itself to lose around $250k per quarter. It will be spending more now, with some director loans owing and no quick path to revenue just yet. With $400k in cash on hand at the last financials, it’s going to be getting tight and soon.

That said, there’s only ever been around $5 million raised to build out the Delta property and their Bellingham lease back, so while competitors who got off the line earlier may have raised hundreds of millions for the right to have lost tens of millions per quarter, Vodis doesn’t have to find much to cover what it’s borrowed and raised to get to the starting line.

To that, the market cap of this company comes in at $3.9 million. That’s not a bad place to build from.

And the chart, more recently, has begun to look interesting. 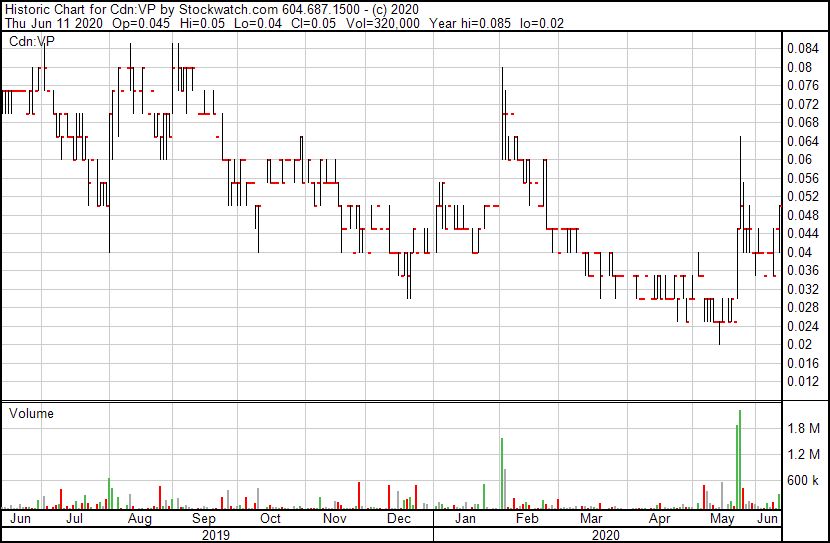 Let’s be clear, you’re not going to compete with the Canopy Growth’s and Aurora’s of the world with this little setup. But you’re also much less likely to have to endure quarter after quarter of $300m asset writeoffs. When the world is losing money, the guy who doesn’t lose much and is just getting started is worth considering.

Thanks for the fair story @ChrisParry.

I wrote that release and don’t consider applying for a Dealer’s Licence to be a cheap attempt at anything.
Psychedelic upstarts don’t have security that we do. Utilizing our otherwise empty Level 8 vault is just an easy revenue stream. https://t.co/klyC2SkdMt

FULL DISCLOSURE: Not a client, no stock held, just checking in and finding it interesting.