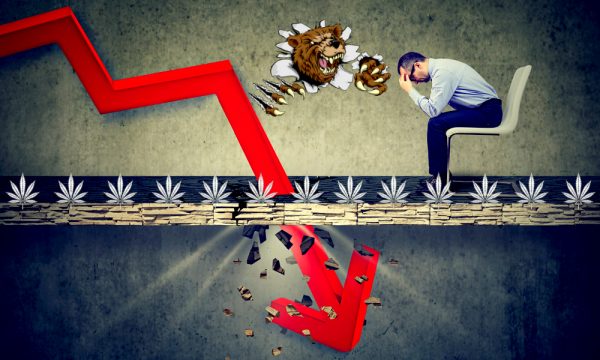 In an industry which used to boast of so much life and promise, we have only surviving companies hunting and scrounging for profits in a post-bubble wasteland. They form enclaves with the recognition of the strength in numbers, and do their utmost to stay alive while their share prices are bludgeoned by the twin clubs of investor apathy and derision.

How did this happen? Simple. If the foundation is weak the edifice will fall. Throw good money after bad long enough and see what happens, and then add a global pandemic. Even though cannabis was lucky enough to be considered an essential service, and therefore be given the nod to stay open to serve the needs of quarantined stoners everywhere, it’s only been enough to forestall the inevitable. But the coroner’s verdict is in:  cannabis is dead.

Settle in, it’s time for your Wednesday Weed rundown.

The North American cannabis market is saturated. Legalization isn’t coming fast enough to the United States and Canada’s market is dense with competitors angling in on the limited space, held for ransom by our respective governments and their vice-like regulations. Even though said regulations have relaxed somewhat as the pearl-clutches in both federal and provincial parliaments realize that Canada hasn’t turned into a real-life re-enactment of Reefer Madness, it still has a fair way to go.

So for companies like Organigram Holdings (OGI.V), which have the cash and will, the next logical step is Europe and beyond. In this case, they’ve chosen beyond, as yesterday’s supply agreement with Canndoc Ltd, one of Israel’s biggest and most established medical cannabis producers can attest.

Canndoc, itself a subsidiary of InterCure (INCR.TLV), has been involved in pharma-grade cannabis for more than 12 years. Their medical cannabis products are all GMP certified, and sold in pharmacies in Israel. It also holds international cultivation and distribution agreements in the EU and Canada.

“Success in international cannabis markets requires a disciplined assessment of opportunities and the identification of strong, world-class partners. For this reason, we are proud to work with Canndoc, a company who we believe shares both our focus on the production of high-quality products and deep commitment to helping patients around the world,” says Greg Engel, chief executive officer of Organigram.

The order of operations are fairly standard.

The company will provide 3,000 kilograms of flower to Canndoc by December 31, 2020. Canndoc will process and distribute the former dried flower into the Israeli medical market. OGI may provide an addition 3,000 kg during the same time period if Canndoc wants it. The agreement includes a tiered pricing scheme and the exact value will shift based on factors like potency and product mix. The agreement also includes provisions for offering Organigram a chance to launch their own branded products with Canndoc in the Israeli and EU markets, and grants exclusivity and related rights within the Israel market for around 7.5 years.

In an even market—one designated sovereign from the depredations of the market, free from hype and the oblivion of its opposite—Organigram wouldn’t be suffering the way it is. They have overcome some earlier foibles and are in the process of selling a good product, and even expanding outward to seek new vistas. But the chart still shows sickness and offers the threat of joining the ranks of the dead. And this company, in comparison, is one of the good ones. They have a good buildout, customers, contacts and big name clients, and they’re undervalued at $2.95.

Canada House Wellness Group (CHV.C) is also trying to join the international expansion party through their Abba Medix subsidiary, although they’re a little behind Organigram in development. They have only recently gotten confirmation from their European distribution partner that the physical inspection date for final European Union good manufacturing practice (EU GMP) certification for its Pickering, Ontario, facility will happen between August 10 and 23.

EU GMP certification will let the company start delivering medicinal cannabis for sale in Germany under the European supply agreements they have in place.

“Although the certification process has been delayed by COVID-19, our focus on bringing Abba’s premium medical cannabis to the German market has not wavered. This is a great step towards what will be a huge milestone for our international export strategy,” aid Chris Churchill-Smith, chief executive officer of Canada House.

Right now they’re at $0.045, which begs the question of whether or not they’ll be dead in a year when the next COVID-19 wave comes and scatters all of our prospects to the wind once again.

Now how about a few companies staying home?

Part of being successful in any endeavour is down to simple geography. If you want to dance you need to go where the music is playing. Delta 9 Cannabis (DN.T) stores were successful early by providing competitive value on cannabis and related products by locating their stores in convenient and high-traffic shopping destinations, which serves as a complement to the company’s overall vertical integration strategy. After all, there’s something to be said for simply being available as an option in the places where people shop. Impulse buying carries in heavy revenue, and getting your products in front of consumer eyeballs is halfway to success.

So why isn’t Delta 9 higher than they are?

The problem is a lack of differentiation, which is an all too common problem in this otherwise dead market.

Consider the next paragraph:

The newest Delta 9 store is located in the business district in downtown Calgary. The store will include highly trained staff offering a wide range of value cannabis products, including flower, cannabis oil, vapes and cartridges, edibles and a full assortment of accessories. Putting a cannabis store in Calgary’s business hub is a good deal for the simple fact that exposes the product to people with money.

Every store from every company boasts highly trained staff and the wide range of value, and everything else rewritten from this press release.

“Customer response to the Delta 9 experience in our four Manitoba stores has been tremendous as we offer customers some of best selection at the lowest prices on cannabis products from the most popular cannabis producers in Canada,” said John Arbuthnot, chief executive officer of Delta 9.

They all say that as well. The mark of a dead market is that nobody believes the pitch anymore.

High Tide (HITI.C) is another cannabis dispensary minded retailer offering similar products, and over the past while they’ve engaged in some heavy expansion into a lot of the same areas as Delta 9. If you were to pass a Delta 9 store and a Canna Cabana store (High Tide’s brand) while in Manitoba or Alberta, would you be able to tell them apart? Doubtful.

For the record, High Tide’s latest Canna Cabana location will be opening on Saturday, June 13th, in Toronto

After awhile, the names blend together until you can’t tell them apart. Mostly because there isn’t much beyond a ticker symbol and a few hastily scrawled press releases to help you.

Just like COVID-19 blew in like a hurricane and rearranged most facets of our lives into a resemblance of a new normal, this is the new normal for cannabis.