Far be it for me to stand up for Canopy Growth Corp (WEED.T), a company that has only succeeded in one thing in its entire existence; convincing folks to buy its stock despite never having done anything else right.

In recent quarters, and through three CEOs, Canopy has been pretty darn forthright that it was going to lose money for a while because it was broken.

And each of those CEOs were right. They each lost a shit ton, continuing to today.

I think we can all agree that Canopy’s losses are foul and distasteful and ruin things for everyone.

They’re also necessary, after Linton spent several years tossing exorbitant amounts of cash and stock at anything that might give the market cap a bump, most of which has since been written off as a loss. Canopy lost money last quarter, and the quarter before that, and the quarter before that. And every time they’ve said, in so many words, ‘This will not be over quickly. You will not enjoy this.’

And yet, here we are watching Canopy stock get slaughtered today as people who bought it in the last ten days somehow thinking they were going to spring their first profit five years ahead of schedule were shocked – devastated – besides themselves, that instead they ran another loss. 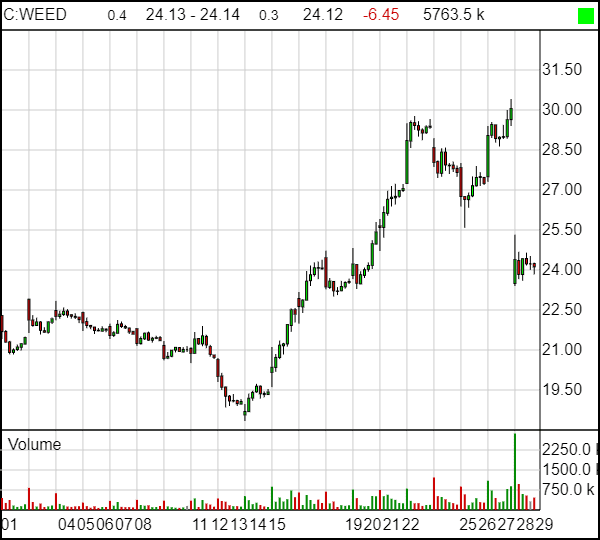 Less than ten days ago, Canopy was a $19 stock. Then folks started buying it like fruitcakes and it ran on no news.

Because of this fucking maroon.

“Canopy is the one. I am feeling a little better about Canopy because of what was said on the Constellation Brands call .. if you think that Biden is gonna beat Trump, this is the stock for you, Canopy, because Biden’s going to legalize pot and Canopy’s got the product. [..] There isn’t any other one that’s better than this.[…] CGC, that’s the one to buy. Very exciting. They’ve got good drinks.”

If you took CNBC’s Jim ‘Crater’ Cramer as knowing what he was talking about when he said buy Canopy, I’m sorry for your life mistakes. Sure, the stock went up after he mentioned it but only because he mentioned it, and now it’s cratered right back to where it was when he opened his gaping maw, because, just as it was a month ago and two months ago, it’s not at all ‘the one’, it’s an overvalued rehab job that still has more writing off to do, and is actually experiencing a slump in sales at a time when most companies are seeing sales rise in Canada.

Today, Canopy is back to $24, which is right where Cramer told folks to jump in. Even after today’s haircut, that stock price is still good for an absurd market cap of…

Klein, on the most recent loss: “I am excited to implement our strategy reset and organization redesign over the course of fiscal 2021. We have a renewed strategic focus and a clear change agenda that is already under way.”

Hey Canopy bagholders, try to listen to the actual words being spoken to you by management of the company you’re investing in:

This is a STRATEGY RESET and ORGANIZATION REDESIGN that will CONTINUE THROUGH FISCAL 2021.

Canopy is not going to suddenly pull a profit. It may never pull a profit. Successive CEOs have told you it isn’t even trying to pull a profit. Linton didn’t give a shit about anything but growth, Zekulin didn’t have the power to make the necessary changes, Klein does but, as he represents Constellation first and foremost, Canopy’s largest shareholder, he doesn’t care about your timelines to profit, only protecting his parent company’s interest.

To that, they’ve all been clear and for some time: There will not be profit here any time soon.

BUT YOU JUST KEEP BUYING.

Grampa, I know you want to have retirement money in weed because you think it must make money sometime, but just buying into the biggest deal is not the smart move. Institutional buyer: I know doing actual research on valuations is more than your interns are capable of, so you just buy a few million bucks of Canopy because it’s defensible to your higher ups, but you have to know there are better options. Beverage fans: I know you see Canopy and Constellation as aligned to make a big dent in that sector, and they’ve definitely put out a lot of beverage SKUs really quickly (to their credit), but they’re not going to sell $100m worth of those in a quarter any time soon. US investors, I know Jim Cramer keeps grabbing your junk and telling you to stop resisting, but Canopy has very little actual business in the US, and when the US does open up to legalization, there’ll be Red Bull cash and Phillip Morris cash and Tyson Foods cash and Pfizer cash jumping in, and Canopy will be dwarfed by them all.

And no, Canopy will not be an acquisition target, and I can give you 10 billion reasons why not.

Aphria (APHA.T) does sales comparable to Canopy without the massive writedowns (these days) and at a $1.5 billion cap. Organigram (OGI.T) is now a well run shop with growing numbers, and a $450 million cap. Even Aurora (ACB.T), which has copied every move of Canopy since its inception, including its recent shift to flaming writedown shitpile, is more attractive a buy than Canopy is, at a $2.1 billion cap.

See, here’s the thing Canopy homers don’t seem to understand… Canopy isn’t going to get acquired… it’s already BEEN acquired. Constellation owns as much as it needs to install a CEO, direct how the share structure plays out, feed itself warrants and repriced stock and anything else it wants.

Either the turnaround goes well, and they’ll grab a little more and take it over proper, or it goes horribly and they’ll dump their shares on the open market and get out. Neither option bodes well for Pop Pop.

Going deeper into these financials and what it was that was written down is almost pointless at this stage, though it’s all here if you’re interested. We’ve done that last quarter and the one before, when billion dollar losses piled up, and nothing has changed because there’s still this dumb mindset in the retail cannabis investor space that if you just buy the biggest option out there, that’s going to be secure.

But that’s not how the market works. The most expensive market caps are the ones where the value has already been won by someone else.

Look at little GTEC Holdings (GTEC.C), a micro grower to be sure when compared to Canopy, but a holder of several licenses at several facilities, putting out a product of growing reputation with growing sales and, to this point, a small quarterly loss as it has built all of the above out.

If I had $100m and wanted an entry into the weed space, I could pay 3x the current $22m market cap on GTEC and still be getting in cheap. I could take their smart people to the US to set up a carbon copy of what they’ve already achieved, only this time with a budget, and be producing in three states with the money left on my $100m.

And GTEC isn’t unique. There are 30 others with market caps under $100m, and another 20 just over that figure, that will all be amazing takeout opportunities for US folks with big money when it’s legal to do so.

But Canopy? What are you gonna do, negotiate with Constellation on a buyout price? Toss $15 billion+ at them to get the rights to sell ‘Houseplant’ in Idaho?

Jesus Christ on a pogo stick, people. I used to think Canopy was everything that’s wrong with the cannabis sector, but they’re actually doing the responsible thing and telling you straight up to take a vacation on expecting any magic turnaround from them, and they’ve been doing so for multiple billion-dollar loss quarters, and you just won’t listen because Jim ‘buy buy buy’ Cramer says ‘they got good drinks.’

It’s clear to me now. The problem with the weed business isn’t Canopy and it never has been, even when Linton was shucking and jiving for your amusement.

The problem, dear reader, is you.