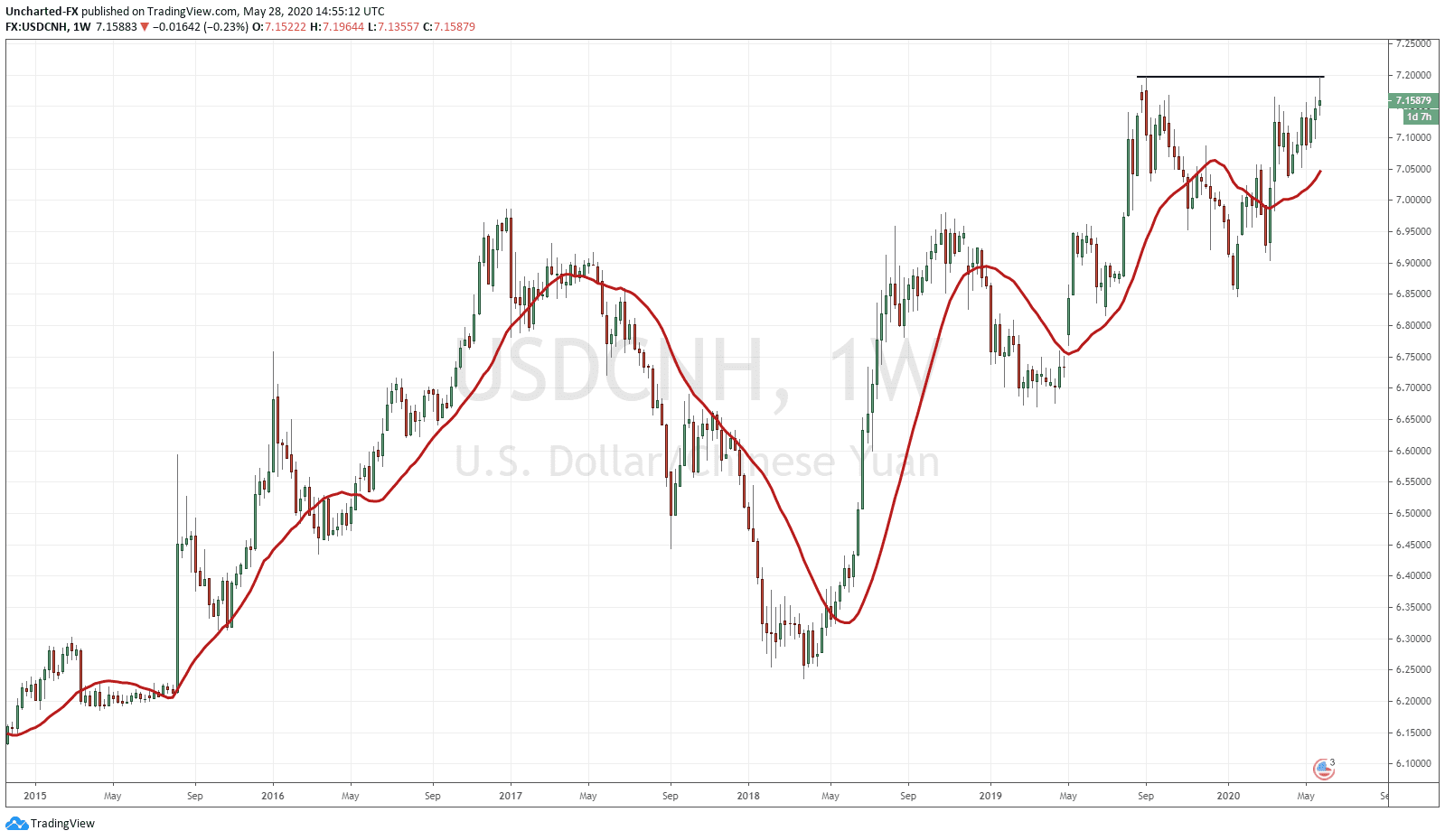 The Communist Party of China (CCP) signed the controversial Hong Kong National Security Law. The China 50 and the Hang Seng initially reacted on the news, but have recovered since. The Hang Seng though is still below my major zone of test which I mentioned in Monday’s post regarding the USDHKD and the Hang Seng.

There are set to be major demonstrations in Hong Kong, similar to those we saw on the streets before Covid-19 imposed lockdowns. This time, the mainland will be allowed to send in forces due to this new bill.

The Americans have condemned this bill. So much so that even Secretary of State Mike Pompeo, came out yesterday saying that Hong Kong is no longer autonomous from China. The Trump administration has promised retaliation, and it is highly probable that we will see sanctions imposed on Chinese officials by the end of this week. That trade deal does not look too good now.

Meanwhile the CCP have been adamant about their one country, two systems approach and have told the Americans to bugger off and stop meddling in China’s domestic issues and sphere of influence. The tit for tat will likely continue.

People like Ray Dalio have already said that we are at war with China. A currency war, a trade war, a technology war, cyber war, and now capital war. The Americans last week passed a bill allowing for the delisting of Chinese companies if they fail to meet and adhere to US regulations. They all do since they do not use GAAP principles of accounting, and why valuing these Chinese companies is so difficult. This has been Kyle Bass’ recommendation because it will see China lose access to the American capital markets (rely on pension funds buying Chinese stocks AND being listed on American and Emerging Market ETFs), and the final blow will be eventually cutting them off from US Dollars.

This is what I want to explore today. The currency war. China has been called a currency manipulator, but to be fair, every country now seems to be a currency manipulator as many nations are attempting to devalue their currency against the US Dollar. China gets the title because their currency is not free floating. Something very strange as China joined the World Trade Organization nearly twenty years ago, and two of the criteria required are to allow free access to financial markets, and a free floating currency. Another reason why many hawks in Washington have said the CCP continuously lies.

This means that naturally the CCP and the People’s Bank of China (PBoC), are the ones that set the target for the Chinese Yuan and allow it to weaken or strengthen…but usually weaken. This week the Chinese Yuan hit all time record lows against the dollar at 7.1964, surpassing September 2019’s lows of 7.1959. Albeit briefly, but many are now saying the CCP will weaken and devalue the Yuan as a reaction to the retaliation from the US over the Hong Kong National Security Law.

Why weaken the Yuan? It has to do with trade, and how the Chinese have essentially leeched manufacturing jobs away from America…although President Obama’s high corporate tax had a large part in this too. A weaker currency is generally used to boost exports. It means more foreign nations are buying your goods because the currency is so cheap. The way to look at this domestically, is that since the Yuan is so devalued, Chinese businessmen who once used to import a lot now find it costly to do so. The hope is that this will spring up new businesses domestically to make up for the things that were once imported, hence encouraging entrepreneurship and boosting the economy. Once again, the Americans have been displeased with this practice for a very long time as it has seen American companies move their manufacturing base over to China and has given China competitive advantage in the international economy. President Trump has approached this the right way with lowering corporate taxes, but there is another large issue. Foreign companies that open up in China are not allowed to repatriate their profits from China back to the US. Instead, the CCP forces the money to remain in China which then forces these foreign companies to reinvest it in China thereby aiding the Chinese economy. Money that could be used to invest in the American economy. This is a huge issue that will need to be addressed, and so far the only solution if the CCP does not change is to prevent US companies from investing in China. This would mean China would have to labelled a foreign enemy like Iran, Venezuela and North Korea.

Balance of payments indicate money flows and demand for a currency. The Bank of Japan did a lot under Abenomics to weaken the Japanese Yen…but the Yen has then gained a lot of strength. This has to do with balance of payments. Weakening the Yen did boost Japanese exports, which indicated money FLOWING into Japan. This means that foreign nations were buying Japanese Yen in order to buy Japanese goods of great quality. It created a demand for the Yen. This has strengthened the Yen.

The Chinese example is different because the government does not allow the currency to free float. What does this mean? That foreign nations do not want to hold onto the Chinese Yuan because the CCP can manipulate the currency openly. And this is why the Yuan will never be the reserve currency as many people have predicted it would. 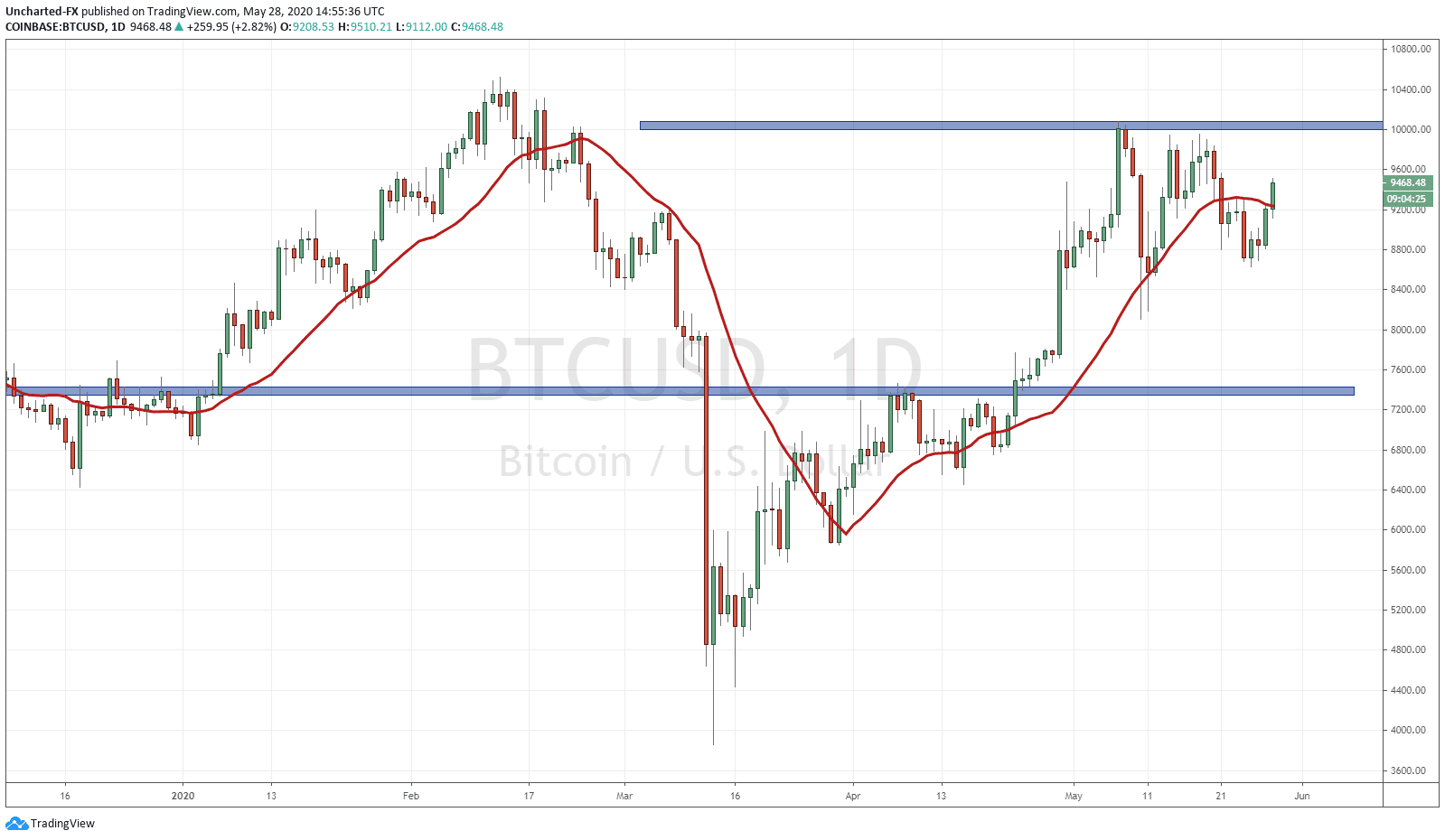 So will the CCP devalue the Yuan even more as a reaction to the US’s retaliation over Hong Kong? I think it is a good bet. Another chart to watch is Bitcoin. Believe it or not, Bitcoin has done well in predicting Yuan devaluations. Trading the markets in China is not something everyone is allowed to do. You need government permission. Day trading is a big no no as well with their t+1 rule meaning you must wait at least one day before selling a stock you bought. The crypto markets are popular in China because they are decentralized, meaning you do not need government permission to trade crypto. It is the only way for Chinese citizens to day trade. When Bitcoin had its run up to 20,000, a lot of this was Chinese money. When China cracked down on crypto, we saw the huge drop.

There are some who say that the Chinese elites in the CCP buy Bitcoin just before a devaluation of the Yuan to make up for losing some purchasing power, and there is some good evidence of this by watching the price action. The average Joe in China can do the same. By the way the Gold vs the Yuan is at all time record highs, and for the same reason. It is very difficult to get your hands on precious metals in China given the huge demand which will only increase due to the CCP’s devaluation policy. The chart of Bitcoin is recovering and inching closer to 10,000 again. Keep your eyes on this and watch how Bitcoin reacts when the USDCNH breaks into all time highs (all time lows for the Yuan).