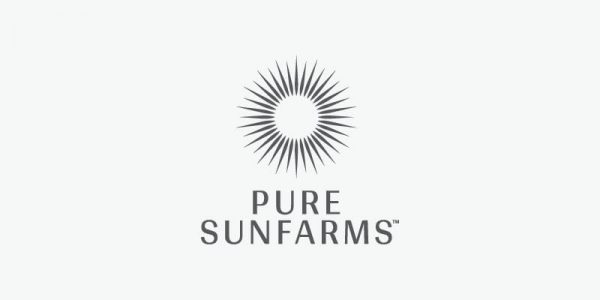 This will allow it to expand capacity as it requires as they amend their licence. When the Delta 2 facility is expected to contribute to lowering Pure Sunfarms’ cultivation costs when it’s in full production. In response, VFF is up 14% and Emerald is up 11.6%.

“At a time when many in the industry are scaling back new construction projects, Pure Sunfarms continues to move forward with expansion of its future capacity to be ready to meet the anticipated long-term demand for its products. We planned Pure Sunfarms’ capacity based on our confidence in Pure Sunfarms’ ability to capture leading market share across multiple product categories and with its consistent ranking as the top dried cannabis brand in Ontario (1), we are confident in the merit of these expansion plans,” said Michael DeGiglio, chief executive officer, Village Farms International.

The two companies formed the JV in June 2017 before the cannabis market went legal in October. VFF contributed one of its greenhouses in Delta, B.C., which they called Delta 3, grower management and workforce, to the joint venture in exchange for 50% ownership. Emerald threw in CAD$20 million, paid in instalments, and its existing cultivation license and expertise, in exchange for the other 50%. That’s since changed due to a dispute in 2019 over provisions in the JV agreement over an existing supply agreement, involving an interpretation in pricing. Eventually, they settled and Village Farms ended up owning 57.4% of the joint venture eon March 6, 2020.

Now that they have Health Canada’s approval, Pure Sunfarms is looking forward to the summer rollout of its first bottled cannabis ils, and the rest of their cannabis 2.0 offerings. The rollout will begin with a launch of prefilled 510 vape cartridges, available in the extract forms of its top-selling dried cannabis strains, and its selection of disposable vape pens, each under the Pure Sunfarms’ brand.

“We are confident that consumers will respond to Pure Sunfarms’ cannabis 2.0 offerings with the same enthusiastic reception that we have seen for its dried cannabis products. The rollout of its first cannabis 2.0 products is just one of a number of near-term catalysts for Pure Sunfarms that we believe will continue to drive Pure Sunfarms’ sales and profitability growth. Pure Sunfarms is the only public Canadian cannabis company to deliver five consecutive quarters of profitability — an incredible achievement anchored in its industry-leading cost of production and its high-quality, safe, attractively priced products that consumers want,” said DeGiglio.

Pure Sunfarms produced 50,000 kg of cannabis in 2019, and they weren’t even licensed for the entire year. The company anticipates that their Delta 3 facility will generate more than 75,000 kg per year. For the first nine months, Pure Sunfarms was a wholesale supplier to other licensed producers, including Emerald. 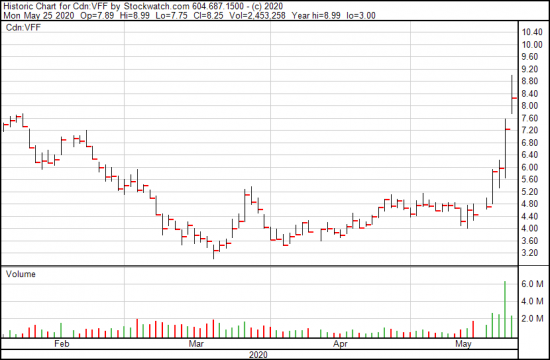 The Village Farms chart displays a rather pleasant looking spike in the past month, while the Emerald Farms below shows the trajectory shift is quite recent, owing to the general malaise in the cannabis markets brought on by the downtown, and COVID-19.

At least someone’s having a good May.