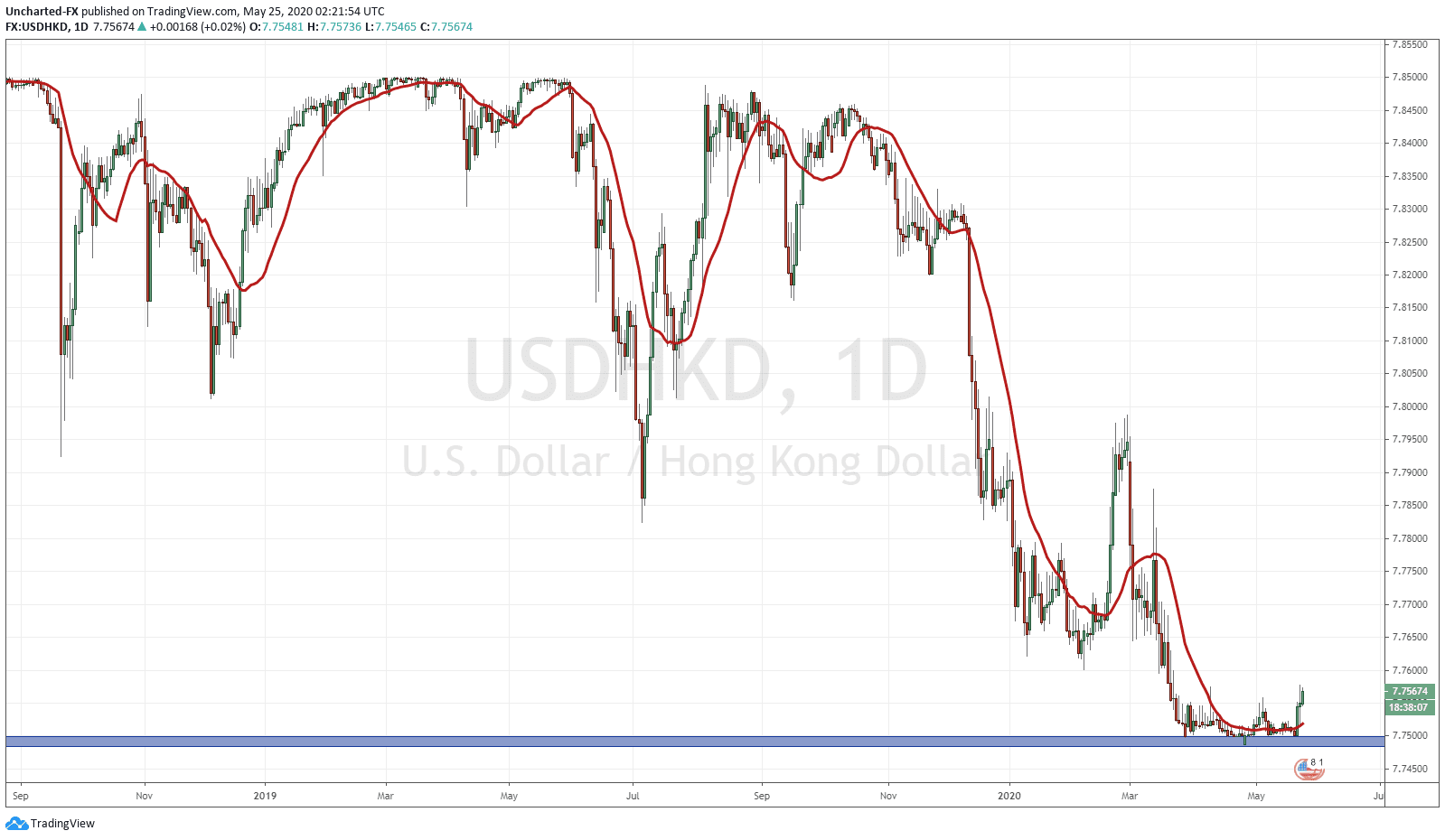 As US markets are closed today for Memorial Day, I thought it would be a good time to talk about what is going on in Hong Kong. Yes, the US S&P has broken above a level on the weekly chart of much significance for us. Tune in on our Market Moment show today (on our Youtube channel) or wait until tomorrow’s Market Moment post to find out.

I wrote a post regarding the US and China and the Thucydides trap, and if a cold war is in the works, watch for spheres of influence to be brought up and tested. The Chinese are adamant on Taiwan and Hong Kong being a part of China’s sphere of influence and the Americans should not be meddling with Chinese interests.

Last year, the protests in Hong Kong were rampant and we saw thousands hit the street opposing the CCP’s 1 country, 2 systems approach as mainland China has a large say in Hong Kong’s Basic Law and foreign affairs. This heated up as a famous Hong Kong author, who published works condemning the CCP, was kidnapped and taken to the mainland, before being returned to Hong Kong with a new approach to the CCP. Go figure.

Hong Kongers have been fighting against this encroachment by the CCP which threatens British and Basic Law in Hong Kong. Many have said that the only reason the CCP did not move in troops to quash the protests, was the fact that Hong Kongers would be able to upload videos on social media of the oppression. The CCP does not control the internet kill switches and has not extended their internet great wall into Hong Kong. The eyes of the world would be watching and China’s reputation on the world stage would be tarnished.

These protests died off as quarantine was issued to fight against covid-19…something that many have speculated has benefited the CCP the most. Covid got the people off the streets. With tensions between the US and China flaring up again, Hong Kong is taking centre stage.

The phase 1 trade deal, which seems to have been nothing but a temporary truce, is now dead and both sides did NOT meet up as they said they were to discuss the progress. We have had President Trump say that he did not want to speak with President Xi, and yet the Premier of China spoke about how the trade deal is still one of importance for China. President Trump then wrote a letter to the World Health Organisation, threatening to cut funding if they do not change. This is very much tied to how they did not investigate and hold China accountable for preventing the spread of the virus. To add more fuel to the fire, the US senate passed a bill allowing for the delisting of Chinese companies if they fail to meet US security regulations, which they pretty much all do since they do not use GAAP standards of accounting. And then, the US and Taiwan are now set to sign a 180 million dollars arms deal, something which has ticked off the Chinese.

Both nations here need to look strong, and this is where many are expecting China to react and retaliate. President Xi is under pressure to make a strong move. Many people forget that he can easily be replaced. Will Hong Kong be that show of power and strength?

Enter the National Security Law. A bill is set to be signed, which would allow the mainland to send in forces into Hong Kong under the event of security issues such as protests, mutiny etc. One that could be applied if hundreds of thousands hit the streets of Hong Kong like they did before the pandemic.  Carrie Lam, who is the Chief Executive of Hong Kong (chosen by the CCP), is losing her support base very very quickly. How much longer she lasts is anybody’s guess, but it does not seem she will have the support of the people, especially once she signs this bill.

So how do we play this? Well it was important to lay the geopolitical foundation. What China does in Hong Kong will be important because the Americans are now saying there will be repercussions if this National Security Law is signed in. Since last year, the Hong Kong protests have been seen carrying US flags and even portraits of President Trump, pleading for the US to stand up for Hong Kong…something I am sure has really ticked off the CCP. Expect Hong Kong and its economy to remain under pressure. Let us take a look at both the USDHKD and the Hang Seng, both of which are showing great plays.

In fact, this is what people like Kyle Bass and Brent Johnson have been speaking about. Brent Johnson approaches this with his US Dollar milkshake theory. That there will be a run into US Dollars which will see the Dollar move much much higher. He has said in a Real Vision interview that the USDHKD is a great way to play this. Yes, a higher Dollar will wreck emerging market currencies, but a higher Dollar will force the peg to break. Kyle Bass approaches this more from a geopolitical angle. That Hong Kong, which has one of the largest real estate bubbles in the world, is now in trouble. He believes that the Hong Kong currency board may not even have enough US Dollars anymore to maintain the peg, which will force the peg to break. If they do not have enough US Dollars, and the Dollar moves higher according to Johnson’s theory, this just adds more strength to the eventuality of the peg being broken.

Furthermore, Bass has spoken about the troubles of the bank HSBC. Bass is also bearish on the Hong Kong stock market, given the troubles in the economy and also the geopolitical uncertainties going forward. What I found very interesting, was the fact that the Hong Kong and China 50 equity markets moved much differently than their US, European and Japanese counterparts. The Hang Seng has broken below a very major zone. 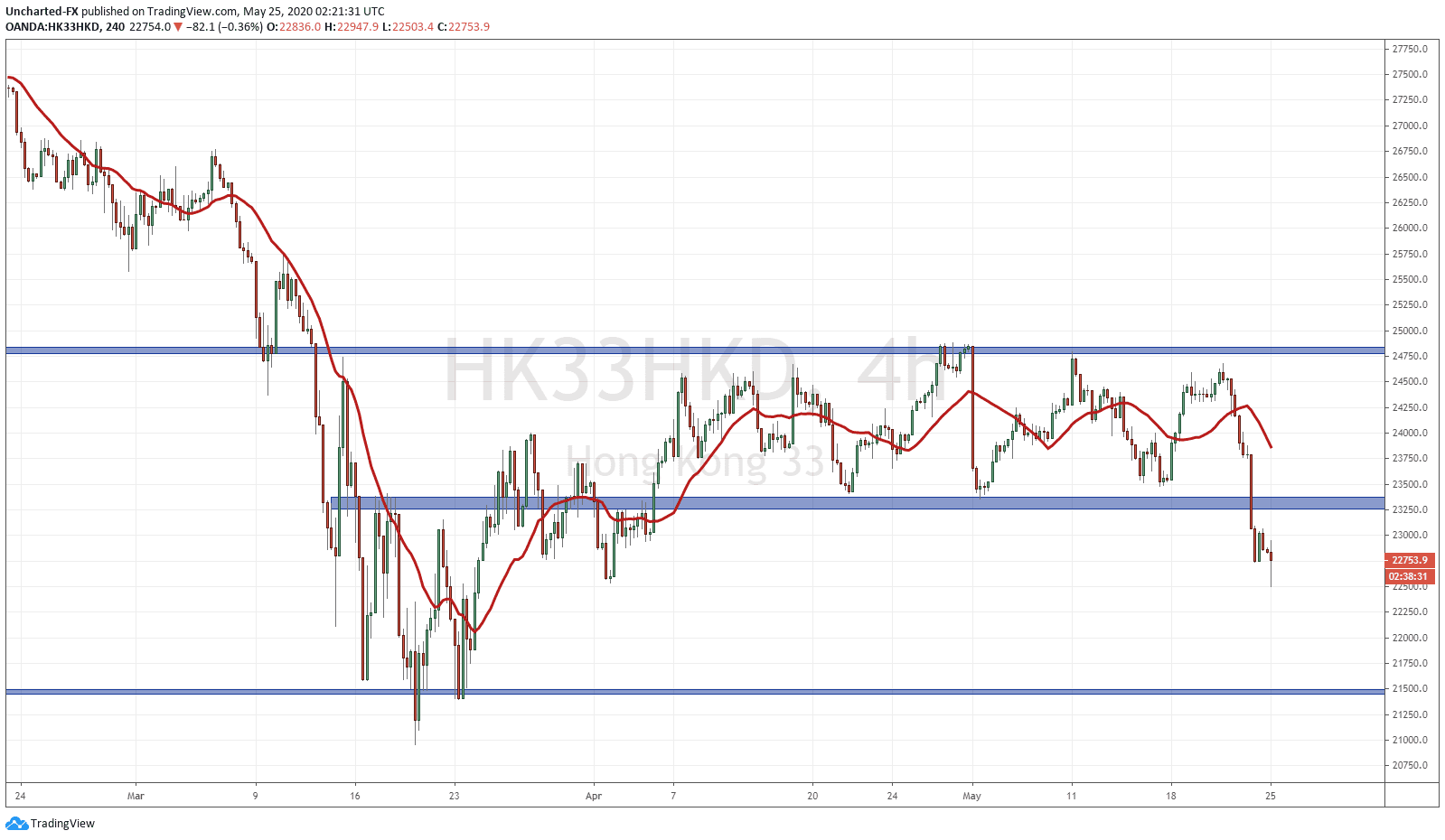 Here is the chart of the Hang Seng on the 4 hour chart, although it looks just as bearish on the daily and the weekly chart when you factor in market structure. The Hang Seng has been in a range on the 4 hour, just like many other markets that I have been following. The support zone of that range has been broken, with a nice strong candle close below. What I am looking for is now our first lower high. This can come in two ways. The first is we move back up to the broken zone and support now becomes resistance and we see sellers come in and defend the zone. Secondly, we form a lower high swing here right now. This could be occurring right now as you can see the pullback has been seeing sellers step in. For this scenario to play out, we need a lower low to confirm the swing. This would mean we need a break and close below 22730.

Both of these plays could be much more longer term. The charts do look good, and the geopolitical environment is not very great for Hong Kong. It does seem Hong Kong will be a central point in this ‘cold war’ between the US and China, and how this issue is resolved will be telling on the future of US and China relations. The Chinese believe the US is meddling in Chinese domestic affairs, while the Americans are saying they are trying to uphold the rights of Hong Kong. I will definitely have my eyes on Hong Kong and I suggest you all do the same.