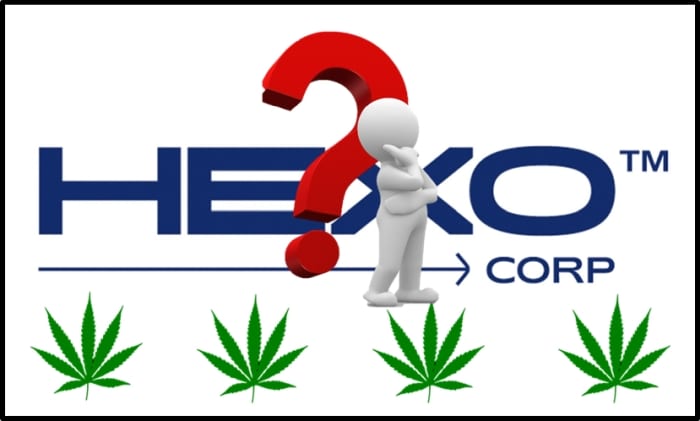 My older sister once complained that our mother favored me because, “Every time she looks at you, she experiences a spasm of gratitude that you have not died of unnatural causes.”

And so it is with Hexo (HEXO.T) – a consumer packaged-goods cannabis company that surged 20% by mid-morning on 18 million shares traded after it announced that it is still alive.

If you’re wondering what Hexo plans to do with the $57.5 million – here’s the answer: “Hexo expects to use the net proceeds for working capital and other general corporate purposes.” 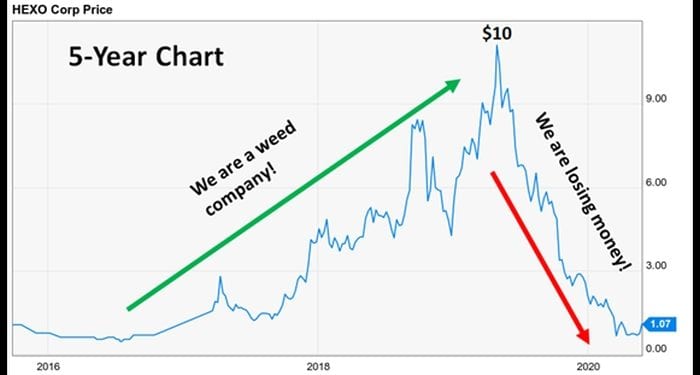 It’s not a great business model.

After completing a strategic review of its cultivation capacity, Hexo decided to list its Niagara grow facility for sale – booking an impairment loss of $138 million.

“Slower than expected retail store rollouts in Canada resulted in constrained distribution channels which have adversely affected market sales and profitability,” stated Hexo, “As a result of these factors, management performed an indicator-based impairment test of goodwill, booking a further loss of $111 million.”

“Following a strategic review of the company’s core and non-core assets we believe we have positioned HEXO to meet these challenges head on,” stated Sebastien St-Louis, CEO and co-founder of HEXO.

Meanwhile Hexo is being sued by MediPharm Labs who claims that Hexo has reneged on a cannabis oil supply deal signed in 2019.

As of January 31, 2020, Hexo held cash equivalents of about $81 million.  Barring further developments, Hexo estimated it will run out of cash in eight months.

“Borrowing money and expanding hard in competition with MedMen (MMEN.C) is a two-edged sword,” explained Equity Guru’s Chris Parry, “In a strong market, you’re building far more value than you’re borrowing but, in a down market, you’re under extra pressure to keep things together when debts come due.” 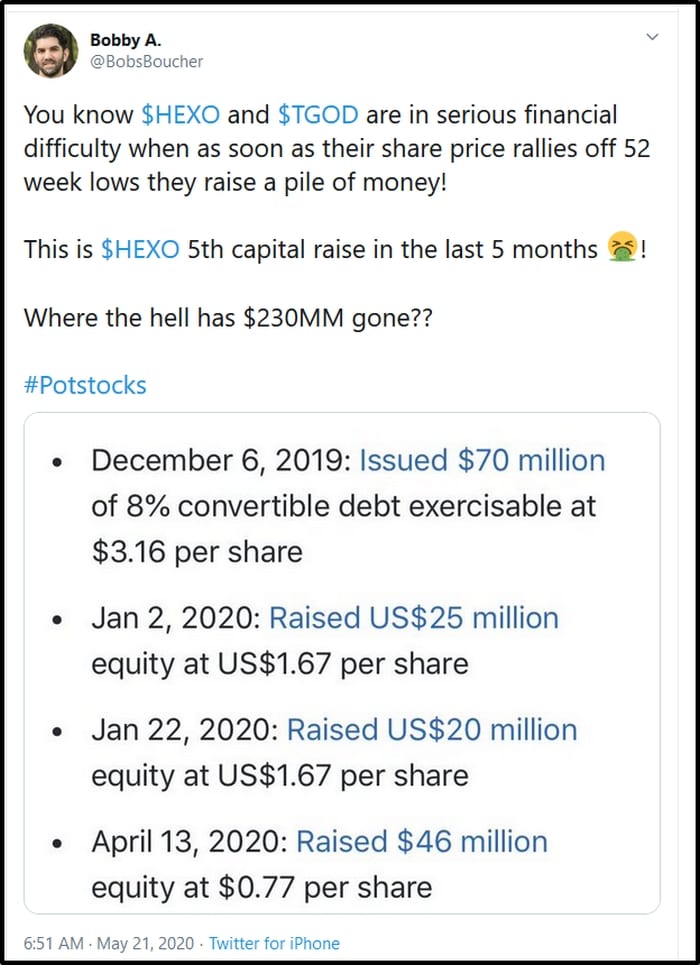 To be fair Hexo isn’t the only well-intentioned weed company to be hemorrhaging money.

Two weeks ago, Hexo received notification from the New York Stock Exchange (NYSE) must regain a price of USD $1.00 per share to maintain its listing. Hexo stated that it is considering all options to regain compliance, including a share consolidation “if necessary.”

When you screw up consistently over an extended period of time, your mere survival as a functioning enterprise becomes a cause for celebration.

After today’s 20% share-price surge, Hexo Corp is trading at USD .62 on the NYSE.

Full Disclosure: no dog in this fight.