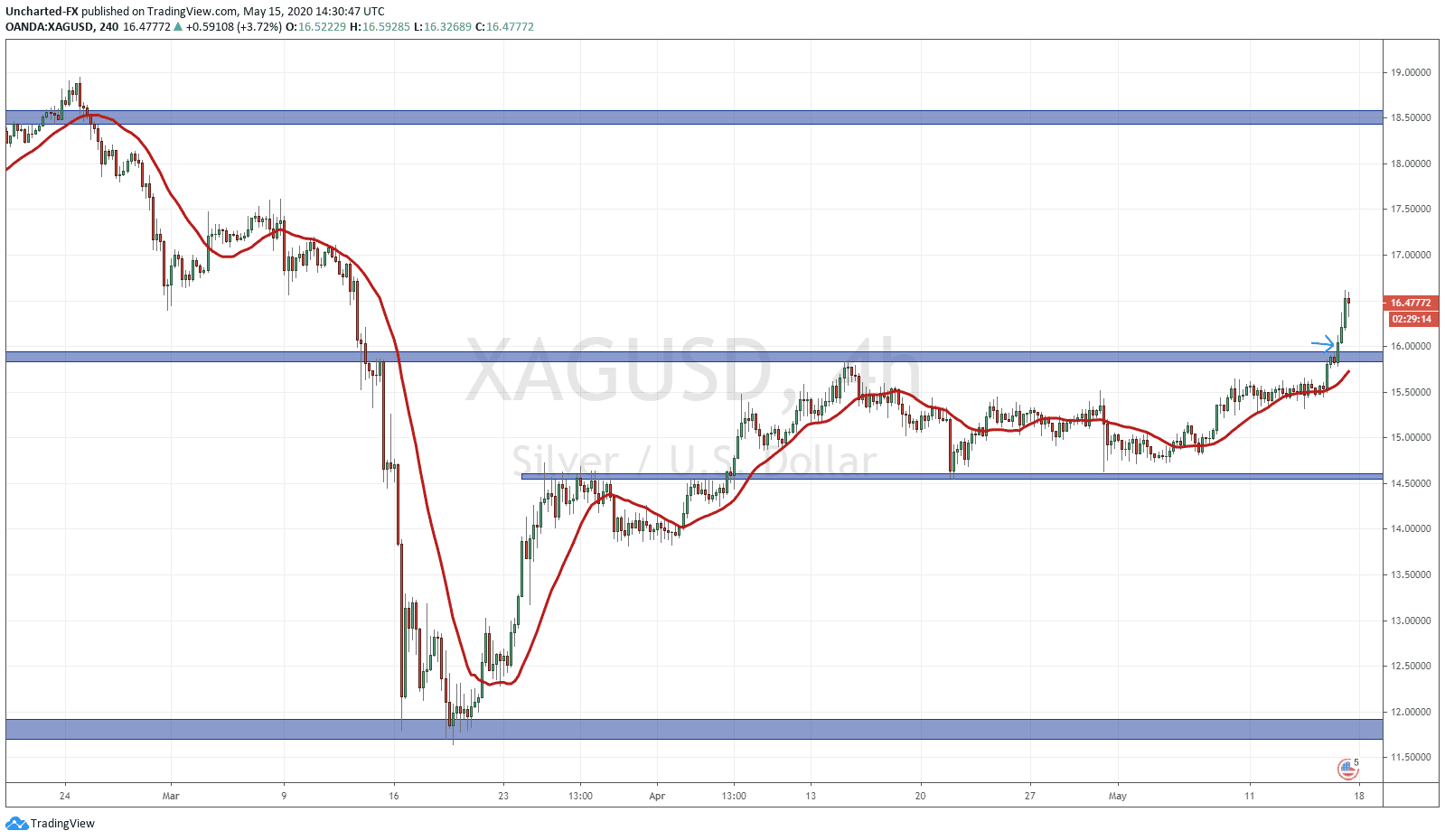 It just had to be one of those weeks. We have had a lot of ranging and frustration on the longer term charts for sometime, and then something had to give. In these last two days of the trading week, we are finally getting moves that I have been looking for. The downfall is that most of them happened Friday morning (mostly for the Forex pairs). The reason I detest Friday breakouts is because more often than naught, they do not continue the momentum of the break at the beginning of the new week. But I am excited to see some of the plays I have discussed on the Market Moment posts beginning to play out, definitely join us over on the Discord channel for live updates on the break outs.

Yesterday night was a great example. On my 10 pm PST 4 hour candle run down, I noticed a break of a range we have been waiting for. This was the break in Silver! The arrow on the chart is the breakout candle I posted over on Discord. The follow through has been great so far. Two more consecutive green candles with price at time of writing, indicating perhaps a pause or a pullback which is perfectly normal. With this breakout, I would be bullish on Silver as long as we remain above 15.78. We have hit a flip zone/ resistance zone at 16.50 but the next major flip/resistance zone is at 17.50. Once again, I do expect a pullback before this move higher. We will play this candle by candle  and it is in effect as long as we remain above 15.78.

The other big news is the fact that the Gold and Silver ratio (XAU/XAG) plunges to two month lows. When Silver was used as a currency, the ratio reflected the rarity and constituted an exchange rate. Historically, the Gold to Silver ratio has been 15/16 to 1 (15 or 16 silver pieces to equal 1 gold). Of course now that Silver is primarily an industrial metal, it does not seem we would ever get to those types of ratio levels again…but I think anything lower from where we are today is entirely possible. When XAU/XAG pierced above 94 in February, this was the all time record highs but it did not end there. We actually went up to 128, making new record highs along the way. The fact that the ratio is this high also provides a good confluence in a continuation in Silver. 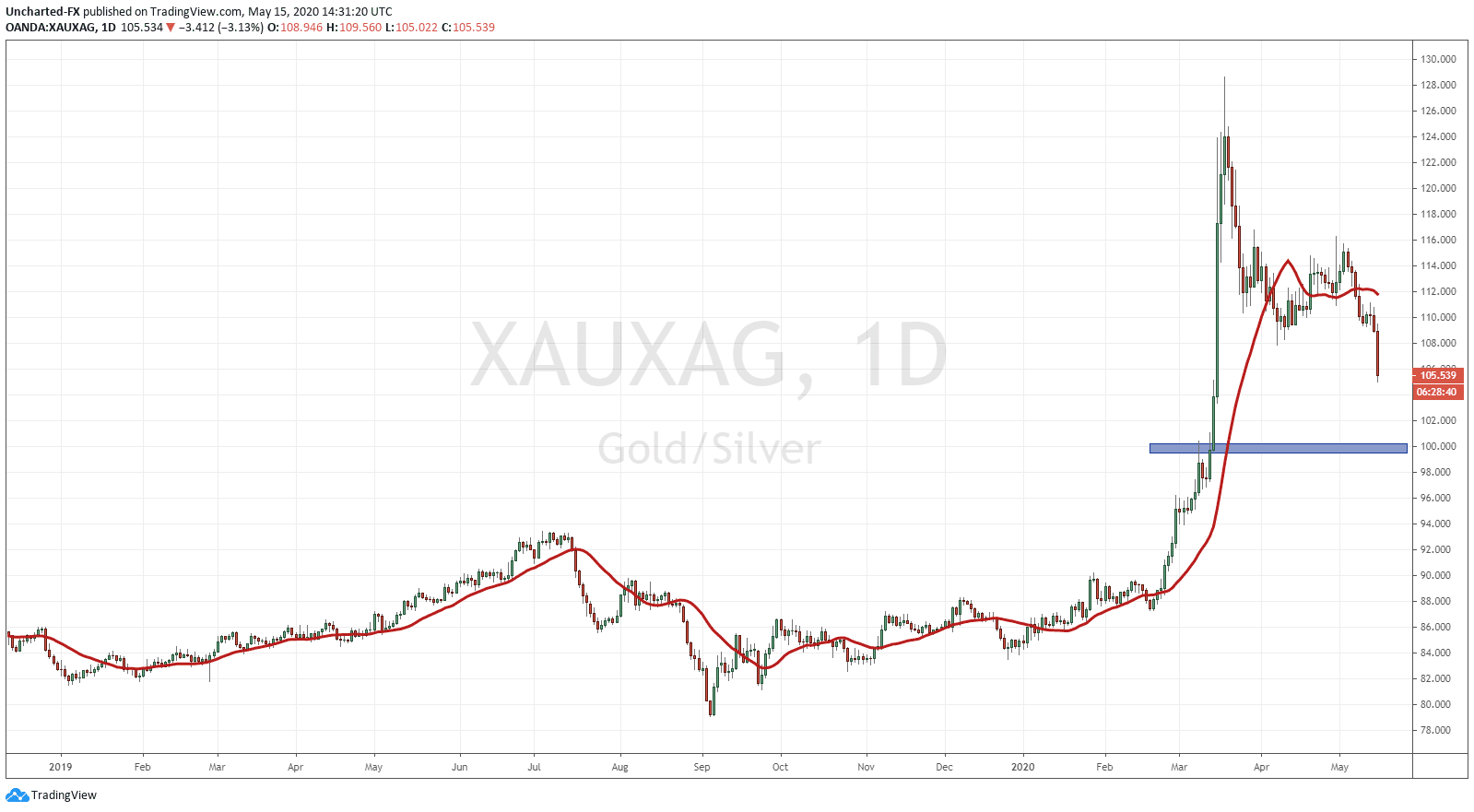 What levels should we be looking at? Looking at the daily chart of the ratio, 100 is the big psychological round number. It is also close to a demand zone (99.75), which is an area where a large price movement began. This means that 17.50 is likely to be hit and even surpassed. That perhaps we should be targeting the large zone at 18.50.

Many on the Discord channel know my love for Silver. Silver gets touted a lot as an industrial metal, but when you compare the correlation between Silver and Gold between Silver and Copper, Silver actually has a higher correlation with the precious metal. I do think there is an immense opportunity in Silver going forward. It is not for everyone. Silver has a history of volatile moves. Not many large hedge funds play it because of this volatility. Silver always creates big movements in the past before selling off.

I like Silver because of what is going to be happening with Gold, and the fact that Silver has a higher correlation with Gold. People like Ray Dalio, Paul Tudor Jones, and Stanley Druckenmiller have been long Gold. The argument is that Gold is the best CURRENCY out there and it is the best risk off asset. In terms of currencies, all central banks are now trying to devalue each other. It is a race to the bottom. What happens when everyone is at 0 or close to 0 interest rates? Yes, the US Dollar being the reserve currency becomes the currency to hold, but even the US wants a weaker Dollar. I have written about the Dollar in my “Tale of Two Dollars” article. Eventually, the Fed will be forced to kill the Dollar. I just think this will happen once the US Dollar makes all time highs, and wrecks havoc on emerging market debt and the world economy. We will then get another plaza accord type meeting with nations all turning and pressuring the Americans to devalue the Dollar. The other argument these billionaires bring up, is that Gold is the best risk off asset. With bond yields plunging, and short term yields below 0.15%, Gold provides an avenue to make yield. Using the asset allocation model, fund managers do like to alternate between equities and fixed income. Money is parked in bonds during uncertain times for the short term (1 month or 3 month bonds). As mentioned, these yield next to nothing, in fact perhaps negative in real terms. What Dalio has been arguing is why not put this money in Gold even for the short term. In this way, there is a possibility to make a return and yield on the price movements of Gold, rather than accept a loss in real terms in bonds.

Gold is really a confidence crisis asset. People run into it when they are losing confidence in central banks, government, and the fiat money. And I do think we are in the midst of this confidence crisis. The technicals for Gold are good and so are the fundamentals. If large fund money runs into Gold, there is a chance they will run into Gold for monetary reasons. Silver would just look cheap to those chasing yield and missing the move in Gold. Gold is about a 8 Trillion dollar market. The Silver market is 1/10th the size of Gold, around 800 Billion. Because of the size of the Silver market, if we do see a rush of big fund money into the white metal, we will see a huge move. Silver truly will move like Gold but on steroids.