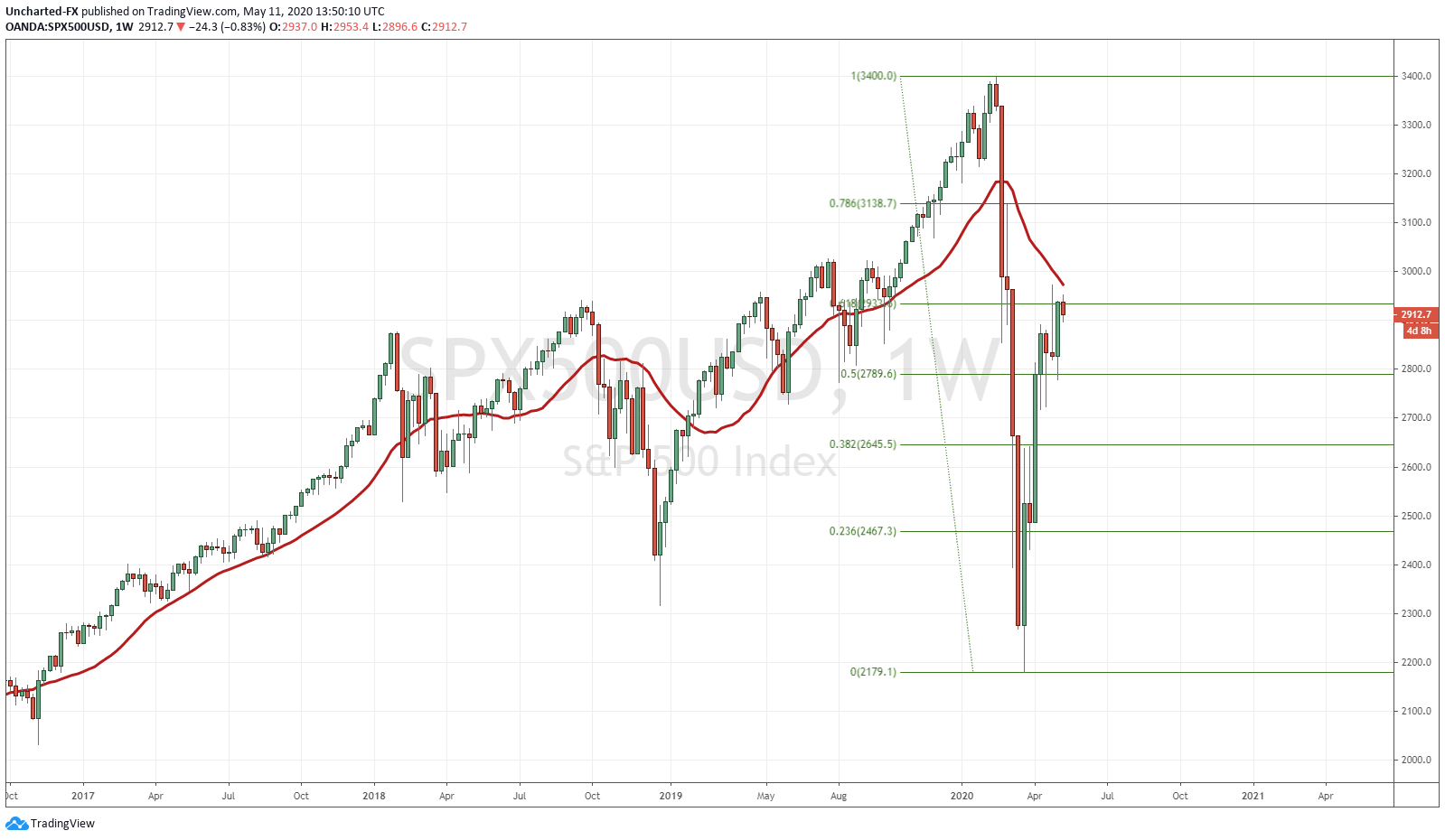 Members of the Equity Guru Discord channel, and followers of the Market Moment posts here on the website know for weeks the importance of this 61.8 fibonacci zone on the S&P and other equity markets. We discussed how the Nasdaq broke and closed above its 61.8 fibonacci level on the weekly chart and what that means for tech. The Nasdaq is now green for the year. It is more likely it will make new all time highs than create new recent lows with a close above the 61.8 fibonacci. The S&P closed slightly above the 61.8 fibonacci. Just slightly. Not strong enough for me to say with a lot of confidence that this break will gather momentum. 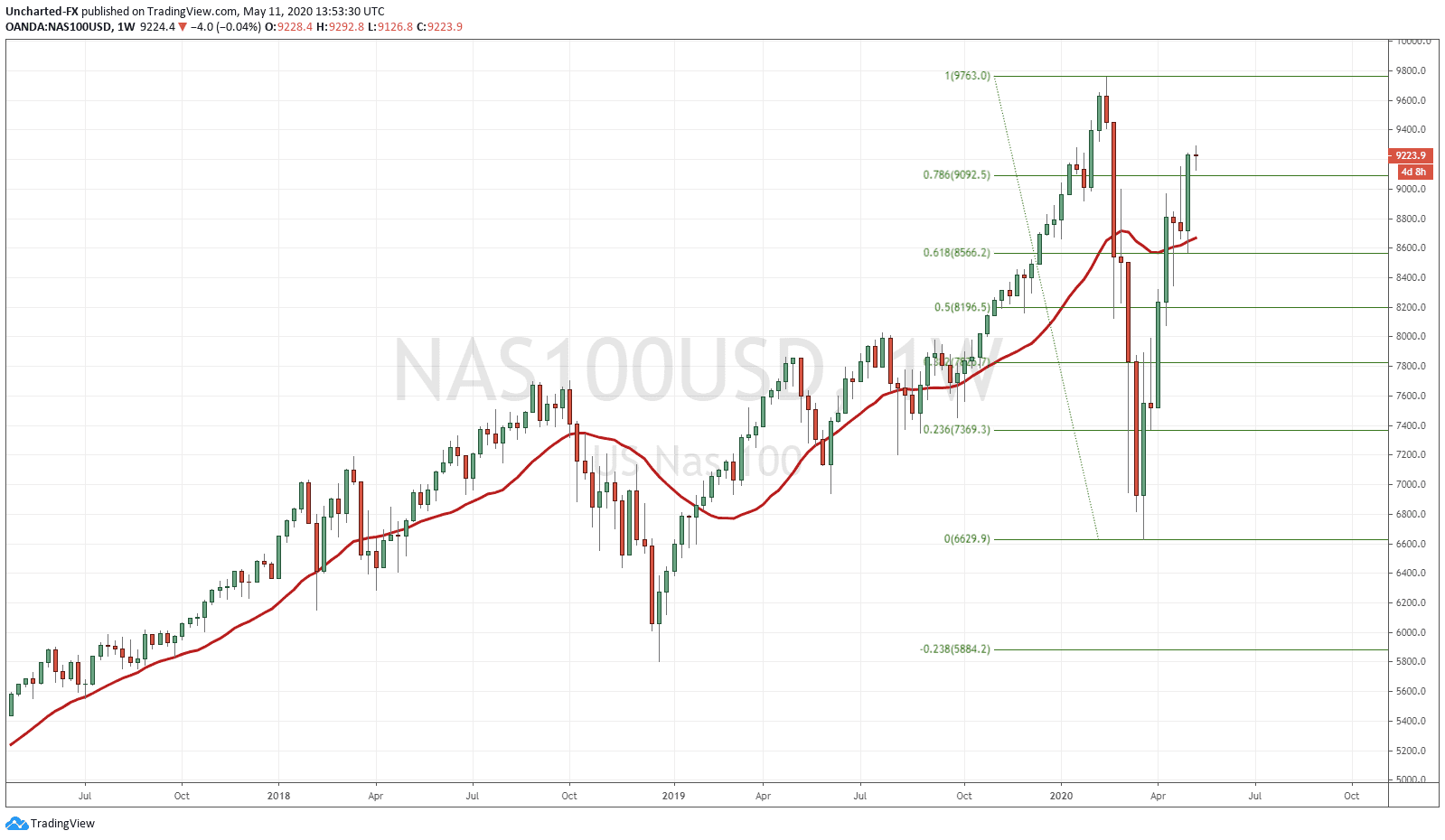 The debate on what the market wants to do is heating up on financial media. We recently had Professor Siegel from the Wharton Business school saying that the lows are in and markets will be heading higher into 2021. On the opposite side (and there are many to choose from), we have Jeffrey Gundlach, who has shorted the market at these levels, claiming the market has not yet priced in the social issues which will occur because of the Fed’s and the US government’s monetary and fiscal policy. What is my opinion? I am more biased towards the upside, but I must make it clear, I trade the markets I see, not the markets I want to see. I really have no opinion on which way markets go. I only act on patterns and candles that present us with an opportunity. As traders we do not care whether markets move up or down, we make money either way.

So what are markets going to do at this pivotal level? I am going to present three ideas here.

Markets either move up, and into all time new highs. Once again, the Nasdaq is already green for the year, and the S&P, the Dow, and the Russell 2000 will catch up. Interestingly, the European markets still are lagging. I like their charts and will post them in the Discord chat. So why to the upside? First of all, and most importantly, there is nowhere to go for yield other than stocks. We heard the market is expecting negative rates by the end of the year, and this added with more money printing ensures stocks are the only place for money managers, and yes, the retail traders to go (although there are options like cryptos and the commodities). The economy is re-opening and this itself will be euphoric and you will hear the fear dissipate as the financial media begin to talk about a V recovery. Finally, the Fed, or the Powell Put. The Federal Reserve is backstopping this market, they will not allow it to fall. If it does…it truly means we are in a confidence crisis.

Markets just range here. Be open to this reality. Last week was a dull market for someone like me who trades the indices. It was also frustrating for some option traders where breakout and breakdowns were quickly reversed. This indicates there is still some uneasiness in markets, and perhaps the battle between the bulls and the bears may continue for a bit longer. This would mean we would bounce up and down between these two fib levels from 2789-2735. As of writing, this seems the more likely case, markets have just been a bit dull recently.

The Market holds the 61.8 fibonacci level and rolls over eventually making new lower lows below 2179. This would create our first lower high here at the 61.8 fibonacci level and confirms what the fibonacci is supposed to do: confirms a continuation of the trend, in this case the downtrend/bear market. However, because of the reasons for higher markets I listed in idea #1, I think a sell off would require a Black Swan event. Something so unexpected that it catches everyone by surprise. We know it is not going to be bad real economy numbers like unemployment and layoffs reaching Great Depression of 1930’s like levels. The market has shrugged that off. So what could these black swan events be? First of all, it could be something political. I do believe this exoneration of Michael Flynn is big, and there is a chance that certain Democrats will be indicted. If we see President Trump reinstate tariffs on China, this would definitely spook the markets. Remember, this week we are supposed to hear about the US and China meeting to discuss the progress of the Phase 1 trade deal…. with reports now that the Chinese want a better deal. Lot of talk about supply chains, and especially about meat. A sudden food supply issue, depending on its severity, would be stock market negative. Finally, a Lehman Brothers like financial event. This would be the scariest for everyone. Many have commented on the fact that this financial crisis cannot be called a financial crisis yet because we have not had a large bank or corporation go down under. The Fed has quickly moved in and bailed everyone out. If you recall, the Fed has been doing repo since Fall of last year. To me, it indicated that perhaps some bank, or banks, are insolvent, and need this money to prevent short term rates from spiking while preventing a credit freeze. As long as the repo mechanism operates, the broken system will continue on. But we must remember, that generally any sort of rigging and attempts to control the free markets generally end up in failure. Would a major bankruptcy cause a shock? Maybe, but as I said, the Fed and even the Government (by taking a stake in the company) would bail this company out. I would keep my eyes on the financial system and the banks.

Once again, I must stress that I trade the markets that I see. As of now, I cannot say the S&P is moving higher solely based on charts, even though we slightly broke above the 61.8 fibonacci. I wanted a more convincing break like we saw on the Nasdaq (take a look at the Nasdaq chart above in comparison, and take a look at the strength of the break above the 61.8). I will wait for this week’s candle close, and in the meanwhile, perhaps take some trades on the equities on the 4 hour and daily chart time frames if presented with an opportunity. The Nasdaq broke out yet again last week, but is looking to sustain the momentum. Will the S&P follow?