Deflation is here! Is that a bad thing?

Today, the U.S. Labor Department reported a general decline in underlying prices during April, 2020 – causing financial pundits to freak out about the possibility of further deflation.

Deflation – at first glance – appears to be a good thing.

However, deflation spooks stock markets because it is a sign of a weakening economy.

Companies respond to falling prices by slowing down their production, which leads to layoffs and salary reductions, which further lowers demand and prices.

There have been counter examples: from 2015 to 2019 Switzerland experienced deflation while unemployment was steady at 5% and the economy chugged along cheerfully.

However, there are significant difference between the U.S. and Swiss economy.

The U.S. is a corporate culture.  Most Swiss firms (over 99%) are small- and medium-sized enterprises (SMEs) – with fewer than 250 employees.  The Swiss businesses are more nimble.

Then there’s the issue of leadership.

The U.S. President Donald Trump (73), is a reality TV star, a self-confessed groper, the CEO of a fake charity, a liar who promotes violence, a tax cheat and a white supremacist.

In 2019 the U.S. imported $452 billion of product from China.  Despite the U.S. dependence on that supply chain Trump frequently antagonises the Chinese – forgetting that the U.S. owes China $1 trillion.

To be perfectly clear, China can tank the U.S. economy any time it wants to.

True, the damage would be collateral – so it’s a good bet that won’t happen. 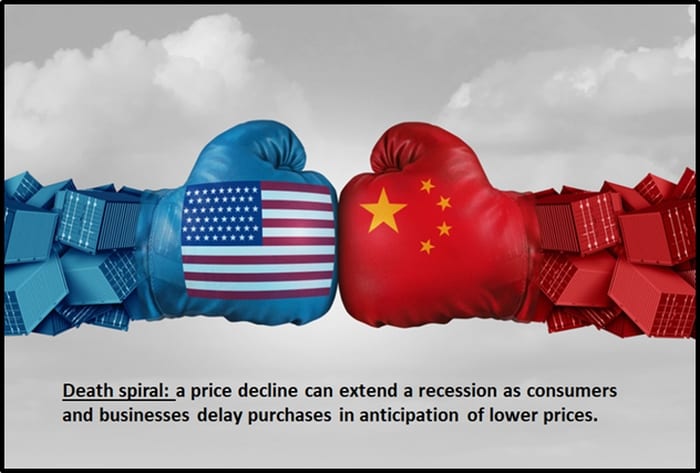 The April, 2020 the U.S. consumer price drop was the most recorded since the 2008 recession.  It was led by a plunge in demand for gasoline, retail and travel services as Americans stayed home during the corona virus crisis.

Excluding the volatile food and energy components, the CPI dropped 0.4% in April, the largest decline since the series started in 1957.

“The lockdown is deflationary,” confirmed Chris Low, chief economist at FHN Financial in New York. “Reopening will be gradual and there will be setbacks.”

How to invest in deflationary environment?

You could target a microcap that has discovered a big business opportunity hidden in a small crack.

You could target a company developing technology related to lawful online gaming.

Or you could target precious-metal assets.

This last suggestion may seem counter-intuitive.

For the last 100 years, one of gold’s biggest catalysts has been inflation. Print money – debase your currency – gold goes up.

Logically, you might think that means deflation is bad for gold.

But the numbers don’t support that theory.

During the Great Depression (1929) the US was on a gold standard with a price fixed at $21 ounce.

In 1933, Roosevelt nationalized gold, and raised the price to $35/ounce. A government mandated 68% increase in the spot price of gold, during a deflationary period.

After the 2008 stock market crash, gold rose 29% during a deflationary environment.

If you believe gold is going to be a wealth-creator in a deflationary environment, check out Equity Guru scribe Greg Nolan’s May 7, 2020 take on Defense (DEFN.V), HighGold (HIGH.V), and Skeena (SKE.V).

“Poor economic data and geopolitical tension between the U.S. and China—Trump threatened new tariffs against China over the coronavirus crisis—could exert significant upward pressure on the metal in the coming days/weeks,” reported Nolan, “the GDX has broken out to multi-year highs and is currently consolidating those gains.

“Consumer prices are being pulled down into the abyss as consumers sitting at home have postponed their purchases,” confirmed Chris Rupkey, chief economist at MUFG in New York. “Part of the reason the Great Depression lingered so long was because consumers knew they could wait till next year to buy cars and refrigerators and homes at a cheaper discount.”

Full Disclosure: Defense Metals is an Equity Guru marketing client.  The writer owns precious metals stocks which he believes will go up in value if the price of gold continues to rise. These two factors are a potential source of editorial bias.  Calling Donald Trump “a self-confessed groper, the CEO of a fake charity, a liar who promotes violence, a tax cheat and a white supremacist” is NOT editorial bias.  Those are facts.