If Tilray (TLRY.Q) will leave any sort of legacy on the Canadian cannabis landscape, it will be that, for a short time and by virtue of a well-timed and paper-lined public listing, the CEO was the highest paid CEO in North America.

For a hot minute, Americans bought in by the truckload and drove the shareprice up like DryShips (DRYS), making the boss a very paper rich man.

Everything else the company has managed to achieve has been downhill from there.

Nobody that has stayed in TLRY stock for longer than six weeks, at any point since the month after it went public, has made money. Not a soul. 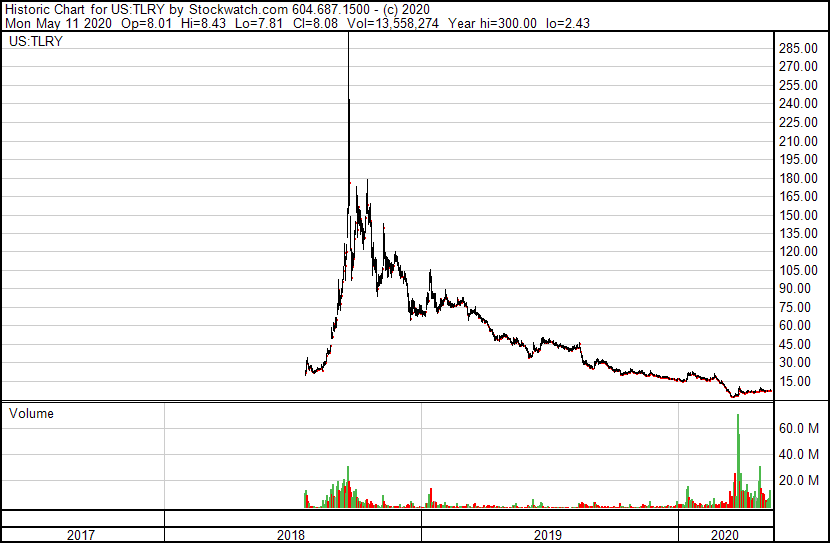 I suspect that’s not going to be the case for long. Today, Tilray announced its most recent financials which included $184 million in net loss, leaving $120m in cash to get through the next quarter, and a CEO priding himself on the plan to eliminate $40 million in ‘annual cost cutting.’

That’s ANNUAL cost cutting, not quarterly. So on a $184m net loss, the boss thinks he can, if he tries REALLY hard, get that loss down to $174m next time around.

But they’re not. The lawsuits relate specifically to a series of transactions, in which Tilray is alleged to have overpaid for assets that they purportedly knew, or should have known, to be worth a lot less in reality.

The Tilray securities class action lawsuit alleges that throughout the Class Period, defendants made materially false and misleading statements and/or failed to disclose adverse information regarding Tilray’s business and operations. Specifically, defendants failed to disclose that: (i) the purported advantages of the [Authentic Brands Group] Agreement [announced January 2019) were significantly overstated; (ii) the underperformance of the ABG Agreement would foreseeably have a significant impact on Tilray’s financial results; and (iii) as a result, Tilray’s public statements were materially false and misleading at all relevant times.

Less than three months after the agreement was announced:

Tilray aren’t the only crew to have fed their own junk to themselves in dealing with ABG: Invictus MD Strategies (GENE.H), which is currently in bankruptcy proceedings, spent most of its last dollars to get out of its own ABG deal.

The legal entanglements go deeper; Others allege Tilray and Privateer tried to bankrupt target companies to get them for lower prices.

The complaint claims that Tilray ran an “outrageous” scam through its majority shareholder and private equity firm Privateer Holdings to convince the company’s owners to bankrupt their own company so Tilray could take them over cheaply. Trimax shareholder Joseph Vasquez III lays out the case in a complaint filed in Florida state court on December 2, 2019, which has since been removed to Florida federal court.

I feel like we need to take a moment here and wind things back to brass tacks. The point of a public company is to return value to its shareholders (all of them by engaging in business in a smart, efficient, responsible manner. We know a lot of public companies fail in that pursuit, but how many fail in the way Tilray has failed?

Say what you will about Canopy Growth Corp (WEED.T), it definitely sucks at earning a quarterly profit, or not losing hundreds of millions per quarter, if we want to go there, but at least some investors made dollars along the way by buying the stock and riding a rise. Profit has been absent, but the valuation has managed to grow as they’ve acquired things and done their best to tentacle themselves across every cannabis vertical.

Tilray’s valuation just keeps cratering, because they’ve made almost no effort at building the business to match the amazing gift of megaovervaluation it was given at public listing, and every time they engage in a transaction, it stinks up the room like they just bought 2,000 used hockey bags.

You could suggest Tilray management was up against it to validate their excessive market cap from day one, that they could never match the valuation the market stupidly, ridiculously, incredulously gave them. But you could also say, when the boss was papered up one side and down the other, company profits may have been a far less motivating factor than they should have been.

If you’re trying to run a responsible public vehicle and keep your share price high, you don’t do sweet deals for some of your investors at the expense of the others.

Last June, Tilray announced that it was merging with Privateer, which formed Tilray in 2013. According to the terms of the deal, Privateer was giving Tilray control over releasing 75 million shares (or 77 percent of Tilray’s outstanding shares) to its stockholders instead of the public.

[..] Following the original announcement of the merger, leading Wall Street cannabis analyst Vivien Azer told her clients in a note, as further reported by Fortune, ““In addition, the extended lock-up and conditions associated with the transactions reduces the risk associated with an excessive increase in TLRY’s public float.”

A few months after the merger closed, Tilray started releasing Privateer’s locked up stock. 11 million shares held in lockup by Privateer investors were dumped to the market. In a few weeks, Tilray stock dove from $15 to $3.

Right now, despite the carnage, Tilray stock has been moving upward from the low for a few months, despite the company still losing a ton of money and still being valued at over $800 million at its present $8 per share.

I hope folks are daytrading it and not falling in love, because most of the stock STILL belongs to Privateer folks, and much of it is locked up but could be unlocked at any time, and any one of those lawsuits could cause real trouble to this group.

There’s nothing wrong with being a cannabis company, even a cannabis company that loses money because its in a growth period, but there are plenty of companies with the same kind of assets and sales as Tilray that do business at a valuation a digit or so less, without the ongoing risk that you’re one day going to wake up finding yourself the last one holding thing.