Activity in the junior mining space for almost everything except gold & uranium has essentially ground to a halt. Yet, on May 4th, First Cobalt (TSX-V: FCC) / (OTCQX: FTTSF) announced the results of a Definitive Feasibility Study (“DFS“) on its 100%-owned, permitted, primary cobalt (“Co“) refinery in Ontario, Canada.

Unlike many junior miners that are 5+ years from production, First Cobalt, with Glencore as its strategic / funding partner, expects to reach commercial production within two years. Glencore proposes lending First Cobalt most, or possibly all, the capital needed to get the refinery up to full capacity by the end of 2021. Then, the companies would split the refinery’s economics (terms yet to be announced) for up to five years, aligning with the expected debt repayment period.

The DFS, summarized in this detailed press release, is highlighted by a 53% after-tax IRR, at a long-term cobalt price of $25/lb. (all figures in US$ unless stated otherwise). Even at today’s spot price of ~$16.5/lb., the IRR would be 39%. Management commissioned a comprehensive industry report from prominent consulting group, Benchmark Mineral Intelligence. That report showed an average price of $26.81/lb., with several years above $30/lb., and as high as $36/lb. later this decade.

Importantly, management is actively exploring (with Glencore’s help) opportunities to enhance the refinery’s flow sheet to improve upon already robust economics. In addition to a 53% IRR, the after-tax NPV(8%) of $139M is 2.5 times upfront cap-ex of $56M (includes a $4.2M contingency).

Notably, most of the cap-ex is spoken for as Glencore has pledged support for $40M in loans, of which $5M has been advanced. According to the press release, third-party lending & government funding options are also on the table. A funding package is expected to be in place by the summer.

First Cobalt’s Refinery, ~600 km from the U.S. border, is a hydro-metallurgical facility in the Canadian Cobalt Camp of Ontario. It’s the only permitted, primary cobalt (“Co“) refinery in N. America. This is a long-lasting, valuable, hard asset with decades of use ahead, and > C$100M invested in it since the 1990s.

Even at full proposed capacity {5,096 tonnes Co/yr., equal to 24,857 tonnes battery-grade Co sulfate} the refinery would account for just 5% of the global (refined) Co market. There appears to be minimal risk of flooding the market with excess supply. On top of possible improvements in op-ex & cap-ex, management believes that the assumed 93% Co sulfate recovery rate has room to improve to 95% or 96%. This might sound trivial, but a 2.5% increase would equate to an additional $7.5M in annual cash flow.

Glencore is strongly backing First Cobalt’s cobalt refinery with debt financing. Depending on prevailing Co sulfate prices, loan pay down would likely take about five years. Note: {If First Cobalt were to keep 50% of refinery economics, and remit most of it to Glencore, it could repay $56M in 4-5 years}.

Benchmark Minerals forecasts cobalt demand from EV batteries alone will exhibit a compound annual growth rate (“CAGR“) of ~18% from 2019 to 2040. If reasonably accurate, cobalt prices would likely move higher, perhaps by a lot. Supportive of a strong cobalt price is the simple fact that two years ago, cobalt was trading at > $40/lb.

Also underpinning stronger cobalt prices is the industry’s dangerous over-reliance on supply (~67%) from the Democratic Republic of Congo (“DRC“). While it’s beyond the scope of this article, there are a number of reasons why producers in the DRC face growing operating risks.

Unfortunately, we need to add COVID-19 to the list of risk factors. This once-in-a-century coronavirus will exacerbate pre-existing problems in the DRC and surrounding countries.

Will there be significant cobalt supply disruptions?

Look no further than the uranium sector to see the considerable impact that an unexpected supply shock can have. The uranium spot price is up ~41% in the past six weeks. COVID-19 has barely shown up on the African continent. Confirmed cases have reached ~50,000 …. only about 1.4% of the global total. Yet, Africa is home to 18% of the world’s population. 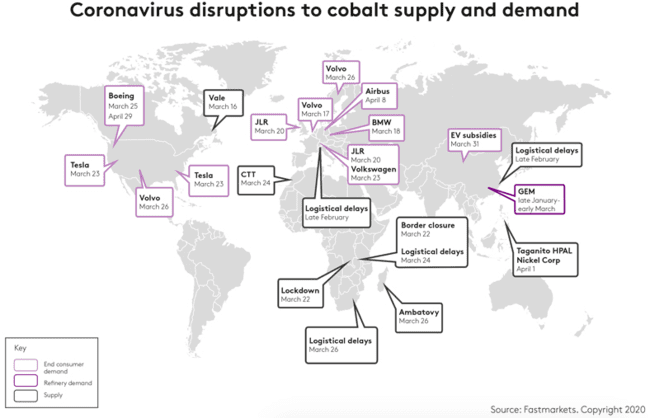 Perhaps more important than a near-to-intermediate-term increase in Co prices is the reminder or warning that an industry sourcing two thirds of a critical material from a single country is a terrible idea!

And then there’s China, controlling 79% of the global market. Will Canada & the U.S. continue to allow China to have so much leverage on such a critical material?

Readers should take a closer look at First Cobalt. In past articles & interviews I’ve mentioned a spectacular Board, retained advisors & management team. But most important, if there’s one thing that readers should take away from this commentary — in uncertain times it’s impossible to overestimate the benefits of being partnered with a giant mining industry company like Glencore.

While the refinery restart is significantly de-risked, and well situated in N. America, it will take a considerable amount of time for debt amassed this year and next to be repaid.

Debt in excess of US$50M might appear unsettling. But, after paying it off, 100% of operating cash flow would accrue solely to First Cobalt. Make no mistake, the plan to incur $50M+ in debt is risky. However, Hatch estimated the replacement value of just the refinery complex buildings and housed equipment at close to $80M.

It would take more than five years to design, permit, conduct studies, fund & build a new cobalt refinery. Time is money. Saving years of headache, expense & managerial resources is valuable to a company like Glencore.

Around that time, the newly unencumbered refinery complex would be worth quite a bit, especially to Glencore, who might want to acquire it even before the debt has been repaid. The refinery is worth considerably more in the hands of Glencore than First Cobalt. It would diversify Glencore’s operations, while providing incremental operating & trading flexibility, as well as cobalt / EV market intelligence.

The refinery economics — instead of discounting cash flows at 8%, Glencore’s much lower cost of equity & debt capital means they could probably discount the project at 4% or 5%. All else equal, over an 11-yr. period, the after-tax NPV(4%) would be ~40% higher than a NPV(8%).

Looking at it a different way, how much might a refinery producing 11,234,757 pounds/yr. of battery-grade Co sulfate be worth as a multiple of gross revenue? In the chart below are a number of producing mining companies. On average, they’re trading at an Enterprise Value to trailing 12-month revenue ratio of 3.5x.

Astute readers may have noticed that I’ve ignored the Company’s considerable exploration assets in the U.S. & Canada. Admittedly, at current cobalt prices they don’t seem to garner much attention. But, think of First Cobalt’s 25 million (combined) Indicated & Inferred pounds in the U.S., plus brown field exploration properties in Ontario, as out-of-the-money call options. If/when the Co price returns to say $30 or $35/lb., this unattributed value might be appreciated again.

How much is 25 million Indicated & Inferred pounds in the ground worth? The gross in-situ value is $750M, but since half of the resource is Inferred, let’s call it $540M. Early-stage copper juniors are trading at an Enterprise Value to pound of about $0.005 (a half penny). By applying that valuation metric to cobalt juniors, 25 million pounds might be ascribed a value of up to $35M (~C$0.12/share) once animal spirits return to the battery metals space.

In addition to the U.S. exploration assets, the third leg of the investment valuation stool is First Cobalt’s Canadian land package that hosts 50 past-producing cobalt / silver mines in Ontario. Like the U.S. resources, these properties should attract a lot more attention in a better battery metals market.

By no means am I suggesting that the share price will more than triple in the near-term, (I offer no predictions or price targets) but I believe First Cobalt (TSX-V: FCC) / (OTCQX: FTTSF) offers compelling risk-adjusted upside potential over the next 12 months. Especially if management notches notable successes in upgrading its DFS and/or the Co price rises back above $25/lb.

Disclosures: The content of this article is for information only. Readers fully understand and agree that nothing contained herein, written by Peter Epstein of Epstein Research [ER], (together, [ER]) about First Cobalt Corp., including but not limited to, commentary, opinions, views, assumptions, reported facts, calculations, etc. is to be considered implicit or explicit investment advice. Nothing contained herein is a recommendation or solicitation to buy or sell any security. [ER] is not responsible for investment actions taken by the reader. [ER] has never been, and is not currently, a registered or licensed financial advisor or broker/dealer, investment advisor, stockbroker, trader, money manager, compliance or legal officer, and does not perform market making activities. [ER] is not directly employed by any company, group, organization, party or person. The shares of First Cobalt Corp. are highly speculative, not suitable for all investors. Readers understand and agree that investments in small cap stocks can result in a 100% loss of invested funds. It is assumed and agreed upon by readers that they will consult with their own licensed or registered financial advisors before making any investment decisions. 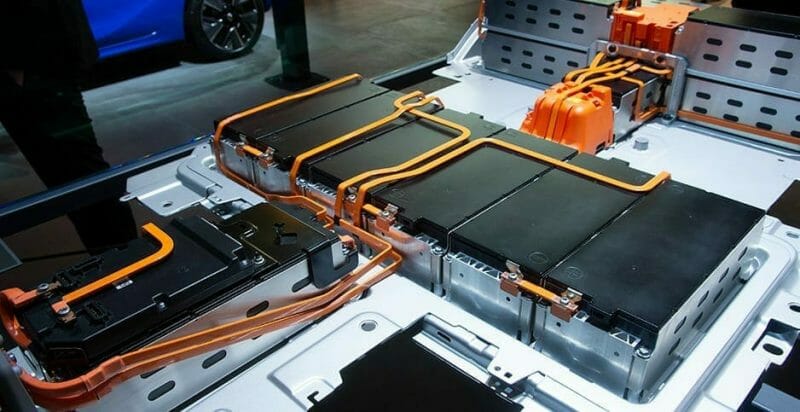