Supreme Cannabis (FIRE.T) got a new President and CEO today in Beena Goldenberg, former Chief Executive Officer of the Canadian arm of the $2 billion Hain-Celestial Group (HAIN.Q), and a bona fide pro in the natural and plant-based consumer packaged goods business. This would appear to be a good hire for a company that already has a great reputation for quality products in an industry where the only way to differentiate yourself is being absurdly cheap or absurdly good.

Hain has developed and acquired some of the bigger names in the organic and natural foods space, including Yves Veggie Cuisine, Terra Chips, Earth’s Best, Celestial Seasonings, Soy Dream and beyond.

She’s picked a fine time to jump in; the company has already done some hard work in turning its fortunes around, and (to me) looks like its found a nice bottom to launch off.

In addition, the company NEEDS a consumer packaged goods plan to be put together and execute quickly. The market is falling hard for edibles right now and Supreme has been slow to enter that space. Its reputation as a quality flower producer offers them no advantage in a value-added products market that cares more about whether your chocolate tastes nice than it does about how good your crop was. If they’re going to play catch up in that space, they’re going to need to either spend a boatload of money to build processing plants, or gain smart partnerships and white labeled SKUs quickly, and they have the right CEO to make the latter plan happen.

Make no mistake: Supreme is refocusing from being the LP other LPs and cannabis enthusiasts would happily buy from, to a company you’ll find on drug store and supermarket shelves in formats that mainstream folks will consume every day.

THIS IS A GOOD THING.

Supreme has gone through teething problems in the last year, with a couple of previous CEOs having worked hard to consolidate the balance sheet while the market cap refused to play ball and lenders/financiers sold into any good news. FIRE has always struggled to be rewarded for its good work, through a combination of early days financing moves fueling a cabal of latter day lender-shorters, and long suffering investors dying on the vine as the company struggled to change a news-shy management mindset.

But the last six months have been particularly brutal.

Though the market cap had dropped to as little as $53 million a bit over a month ago as COVID-19 issues and market crashes combined to rip it down, in recent weeks the company has climbed hard off the bottom to now sit double that value. While a double may make it seem like investors have missed the jump, the company hasn’t been this cheap since 2016, and continues to sell some of the finest flower on the market.

The company has never struggled with cash, in fact it sat on a huge war chest for a long time, but now is the time to pinch pennies and show profit is inevitable rather than hopeful.

To that, Supreme announced late last week it would be raising just under $10 million with an at-the-market (ATM) raise.

The Supreme Cannabis Company Inc. has established an at-the-market equity program that allows the company to issue and sell up to $9.75-million of common shares in the capital of the company from treasury to the public, from time to time, at the company’s discretion. All common shares sold under the ATM program will be sold through the Toronto Stock Exchange or another marketplace .. upon which the common shares are listed, quoted or otherwise traded, at the prevailing market price at the time of sale.

Translated: Supreme is going to sell around $10m of stock to the markets whenever it feels like it, so it can ‘dribble raise’ cash over a period rather than borrowing or doing a financing with guys big enough to keep knocking them around when their paper goes free trading.

I don’t hate that move, because many a good stock run has been handbraked by a financing putting a temporary ceiling on the share price, but the plan does come with consequences. Like any financing, the stock structure will continue to be diluted. And while a regular old vanilla private placement financing is at a set price with the details out there for everone to see, an ATM raise can come and go as the company likes. When you buy in, you don’t know if your trade will elevate the stock price on the open market, or be filled with company paper at an upside-limited price.

Looking at the Supreme over the last few weeks, it would appear to me someone is already limiting the upside price by selling to anyone who tries to buy for $0.30 or more. 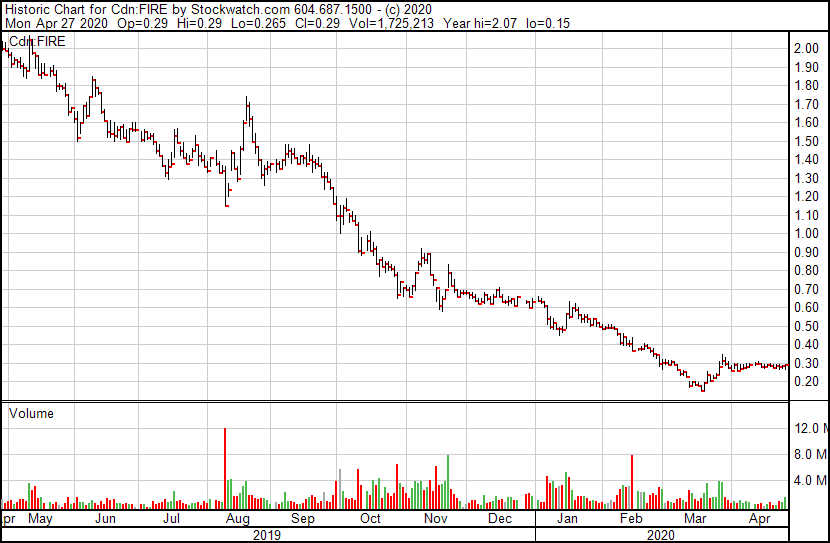 Check out that smooth ceiling for the month of April, where every time someone opts to buy stock at $0.30, they’re filled immediately. Someone is selling a lot of FIRE paper, and it’s either the company itself rolling out the ATM program early (unlikely as they just announced it) or a large player cashing out over time, turning FIRE’s run into their exit strategy.

Either way, a two week double at the end of March has turned into a month long volatility pause in April, which appears to have had the additional consequence of sending trading volume to some of the lowest levels in years.

I mean, if you can see the stock isn’t going to rise no matter how much of it is bought, why buy now at all, right?

My thought: This too shall pass. And when it does, there’s going to be some pent up demand.

The ATM announcement shows Supreme Cannabis wants to raise a little more dough, but doesn’t necesarily think this price is where they’ll do it or that they’re in an emergency to get it done. Also, it fuels my suspicions that FIRE is being deliberately held down by someone who wants to offer Supreme financing, but wants to do so at a discounted conversion/share price.

The above is most assuredly only my suspicions and not based on any knowledge of the situation proper, but it’s a carbon copy of a conversation had at another company I had a hand in bringing public recently, where a big public listing debut run took a wrench to the head from one of the financiers that got it there, which then shorted the company and bled out its shares for months, all the while suggesting a cheap raise through their brokerage would be a great thing.

It ought to be illegal, but it’s all too commonplace. Investors bark at the company for the poor stock performance and stop investing, the company tries to do the right thing but with no support, inevitably cedes to the manipulators, whereby investors yell at them for doing ‘sweet deals’.

To be sure, it could be just a coincidence that every time Supreme Cannabis’s stock lifts above $0.30 it gets filled back down to $0.30 or lower, but I’d bet a month’s supply of that sweet sweet 7 Acres Jean Guy that it isn’t.

SO WHAT DOES THE COMPANY DO NEXT?

When I see market shenanigans like I can see looking at the Supreme stock chart right now, I know there’s any opportunity out the other side of it. Let the players play, understand the rules they’re playing with, and realize a company consistently hitting the ceiling that has been placed over it will rip when that ceiling is removed.

And if the players know Supreme is done being their kickaround toy, chances are they’ll move along soon.

I’m watchlisting with a view to climbing back in for the long haul the moment I see some give on that ceiling.