At Equity.Guru, we’ve been tight with Nexus Gold (NXS.V) boss Alex Klenman for years. He’s been through it with Nexus, from former CEOs selling off his stock in secret, filing their inside trading docs a year late, to stock promoters demanding money and then, upon being refused, crashing the stock, to dark pool shenanigans, rollbacks and more.

We’ve laid out a lot of those issues in the past as an explanation how a gold explorer that seems to have some interesting land packages, and does regular work, can find itself so damnedly underwater for so long. Company puts out news, stock starts to lift, massive selling bangs it down. Company puts out news, massive sell orders show up that spook the market, stock drops, sell orders go away.

To be honest, I stopped talking about, and billing, the company a while back because it just seemed it didn’t matter how good the charts looked and how much work the company did, or how good the properties were, there was just too much jiggeryfuckery about to compel anyone to think seriously about buying in.

A lot of very influential people have started digging into this thing and it may just be the perma-sellers have burned through their stake, because Nexus is moving.

Over the last two days, there’s been substantial news.

The phase one program will consist of a minimum 1000-meter diamond drill campaign to test the mineralization potential of several gold targets occurring within a corridor along the southern contact of the Dome Stock with felsic Volcanics of the Balmer Assemblage.

“There are several areas of interest on the property, and we’re going to systematically work our way through these zones,” says Klenman. “This initial program will test an area that has already generated some high-grade drill intercepts in the past. McKenzie is our primary Canadian project, and we plan on conducting multiple drill programs at Red Lake this year. We believe McKenzie holds a lot of unrealized value and drilling is obviously the key to unlocking it.”

Nexus Gold Corp. has entered into a definitive property option agreement with Leocor Ventures Inc., dated April 22, 2020, pursuant to which the parties intend to co-operate in the development of the recently acquired Dorset gold project, located in Newfoundland, south of the Pine Cove gold mine. Under the terms of the option agreement, Leocor will be granted the right to acquire up to a 100-per-cent interest in the project in consideration for completing a series of cash payments totalling $1.25-million over a four-year term, of which $100,000 is due and payable to the company upon Toronto Stock Exchange approval, and incurring expenditures on the project of at least $1.5-million over a five-year term.

Up-front, Nexus’s new deal is snagged for just $100k. Only $400k is required by end of year two, between work done and cash, to own more and keep it going. Good deal.

But the best part of the deal is that it’s ACTUALLY MOVING THE STOCK.

This shouldn’t be mindblowing but if you’ve followed Nexus over the years it’s an epic watershed in the companys history.

If you want evidence of that, just check back to late February of this year, when the company churned a boatload of stock, a high in trading volume not seen at the company in forever, yet THE STOCK DIDN’T MOVE. 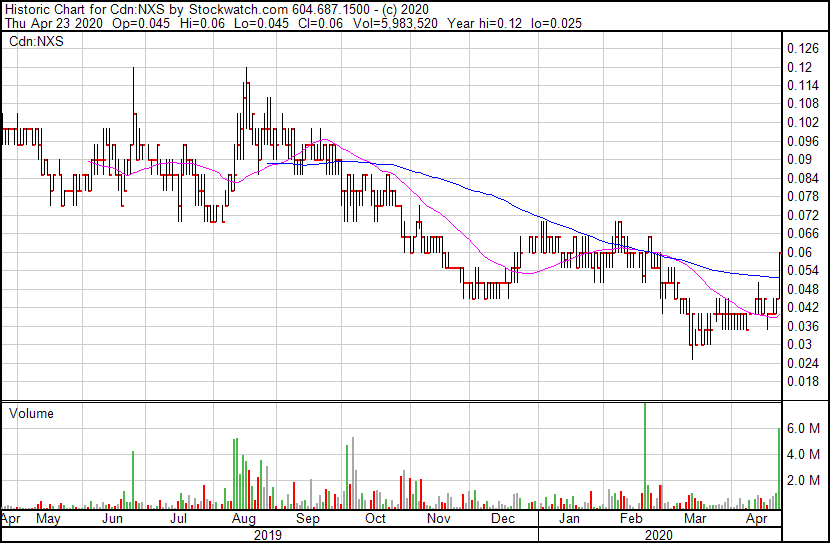 How about October of last year? Same deal. Last August there was a sustained run but it was sucked back over several days.

Today’s buying was the first time in this companys timeline that multi-million share buying has *actually elevated the share price* in a single day – up from from $0.04 to $0.06, good to jack the market cap to $8 million – which is steal cheap as dirt.

If Nexus can keep this roll going tomorrow, maybe even hold it into Monday, this would be, to me, a breakout sign for a company that has for such a long time been held underwater by self-interested douchebags and parasites, while the guy at the helm has spent thousands of hours on the phone explaining it all, scratching to find cash to do work regardless, and standing tall in the face of disappointed investors.

But lansakes, if he hasn’t done all the work one could hope for him to do so this stock can fight back from the brink, I just don’t know what more he could have done.

If Nexus Gold can get to halfway where it should be in the months ahead, it’ll be a far sight more expensive than it is now.

FULL DISCLOSURE: Though we paused his program to ensure he wasn’t wasting money when he couldn’t rightly expect a good return on his investment over the last several months, Nexus Gold remains an Equity.Guru marketing client, and we continue to be there for investors.