Oil: WTF is Going On? 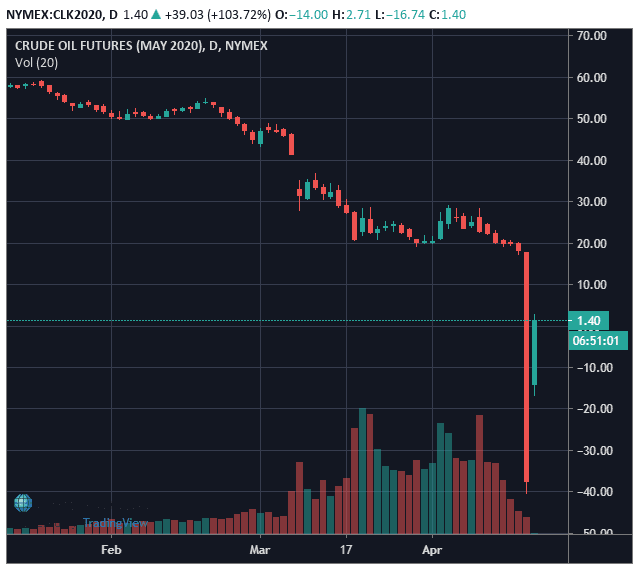 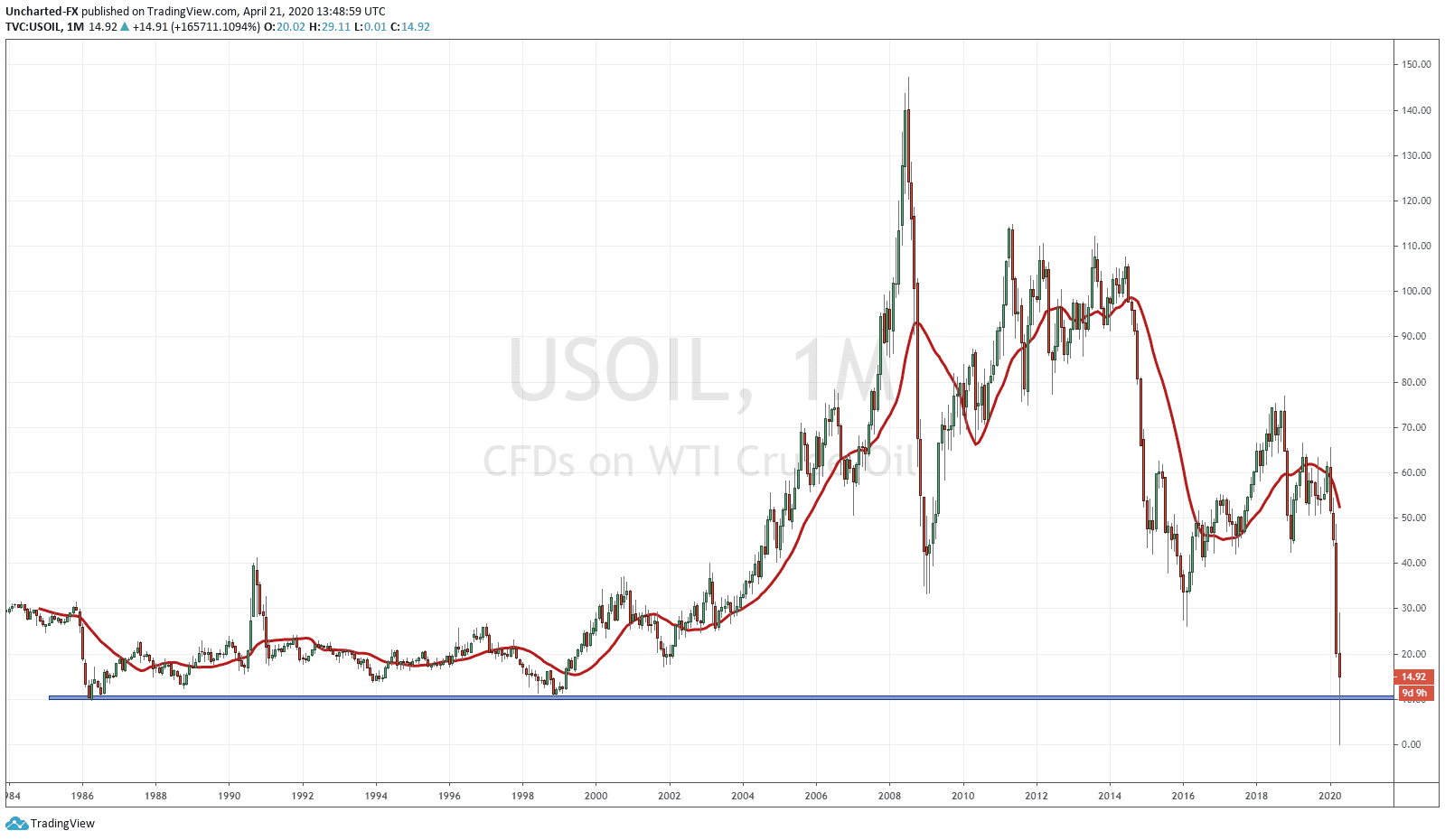 Well…it is safe to say April 20th/2020 will be a day that will always be remembered. For the first time in history, we hit negative on West Texas Oil. On the evening of the 19th, I posted the ticker of Western Canadian Select hitting negative on the discord channel. Before I went to bed, USOIL was at around 19 a barrel. Boy how things would change. Looking at the charts in the morning, we were down 40% in Oil. Near the end we would be down 99.95% on the CFD chart for USOIL with price at 0.01 while May Futures for Oil hit close to -40, down well over 200%. In a world where most thought negative interest rates were crazy, this definitely eclipses that. Just think about that for a second. Negative Oil prices. How do you even trade this? I trade Oil CFDs through my broker and it was frozen at 0.01. Could I even short it? Perhaps not as this was the first time Oil hit negative. All the action was in the Oil futures market, and the fact that contracts were expiring today (April 21st/2020).

Take a look at the chart I have posted above. There was a large monthly chart support at $10. As a technical trader, I would expect some sort of reaction there. I mean this support has held since the 1980’s. A break below would see a 30 plus year support level break. Indeed it did, and just shows how historic this Oil plunge is.

There has been a huge supply glut. Nobody denies this. There was too much Oil with not enough demand. The price war between Russia and Saudi Arabia, which eventually led to a production cut of 9.7 million barrels a day, did not account for anything, as the reduction in supply was nowhere near the decline in demand. There has always been an issue with OPEC and production cuts due to game theory. 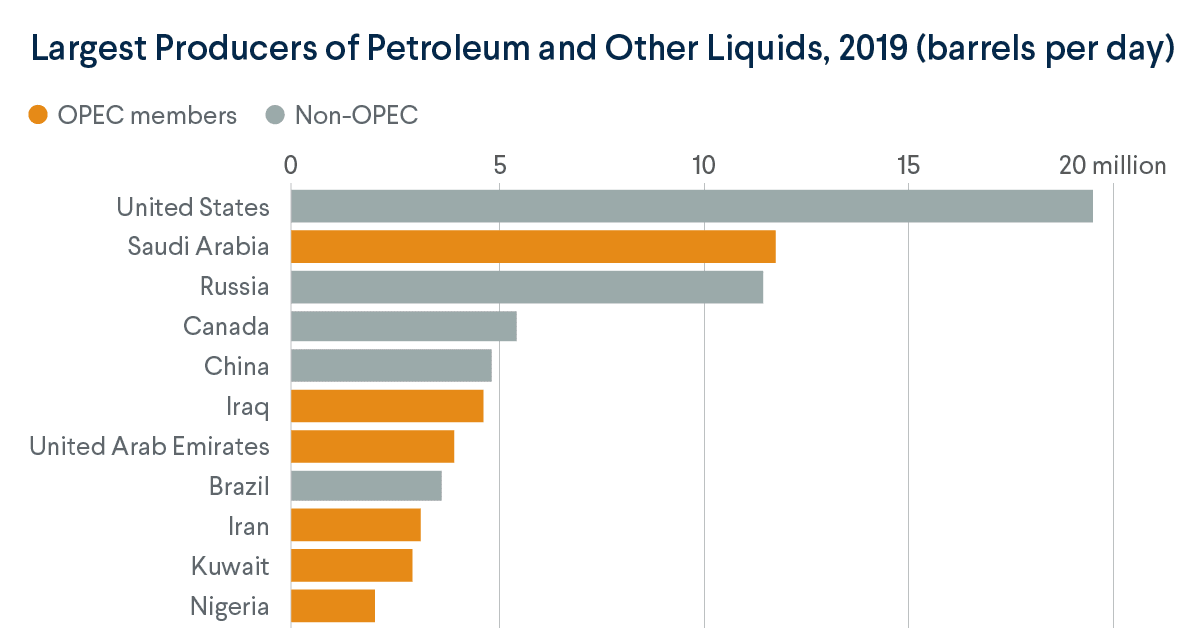 To quickly summarize game theory: there is an incentive for members of a cartel to cheat. If OPEC gets together to cut production, it is all about WHO will take the hit and cut their production. For our example, let’s say every nation equally does so. They cut by 1 million barrels each, and then the price goes from 45 to 55 a barrel (how the oil longs would love this right about now). All is well and good, as all members are now making 55 a barrel on Oil. However, say demand for Oil has not changed. An Oil starving country like China, Japan or Germany, needs more Oil. Now there is an incentive for a nation to cheat on the cut. Why? Yes, making 55 a barrel is good, but what is even better, is the fact that demand is still high. There is an incentive for some nations to start producing back to their original amount pre production cut, and sell it to these nations which have higher demand. You can make extra money this way. Word gets out that one member is cheating and is producing the original amount now, and then all nations do the same and we return back to the price Oil originally was before.

The key here is market share. No nation wants to cut production of Oil without some sort of guarantee because if one member cheats, the cheating nation will eat up the market share of other members by supplying Oil to the nations with extra demand. Venezuela was famous for this, where many people believe that the Saudi’s took Oil down in 2014 in order to take Venezuelan oil offline as punishment. Something they still have not recovered from until recently with Russian and Chinese aid.

Many smaller nations in OPEC did not want to cut because they literally depend on their Oil exports, so it was always the Saudi’s that ended up cutting. The Saudi’s hated this because they kept losing their market share to their mortal enemies, the Iranians. The Iranians have never had an interest in cutting production due to the sanctions imposed on them. They need the money rolling in. It has been the Iranians who have benefited by eating up Saudi market share by supplying Oil to China, Turkey, India, some European nations, and for some time, both South Korea and Japan. The stronger US Dollar has a role to play in this as well, as the Iranians do not take US dollars for their Oil (the Petro Dollar), but that is something you can read in my article “The Tale of Two Dollars”.

In summary, that production cut was doomed to fail. Especially since both Russia and Saudi Arabia knew a recession was coming so the demand was going to be falling substantially. It was best to sell as much oil as you could at these prices, to make as much money as possible, because it was very likely going to be a long time before oil prices recovered. Everyone was pumping and would not stop pumping, which aided in exacerbating this supply glut. 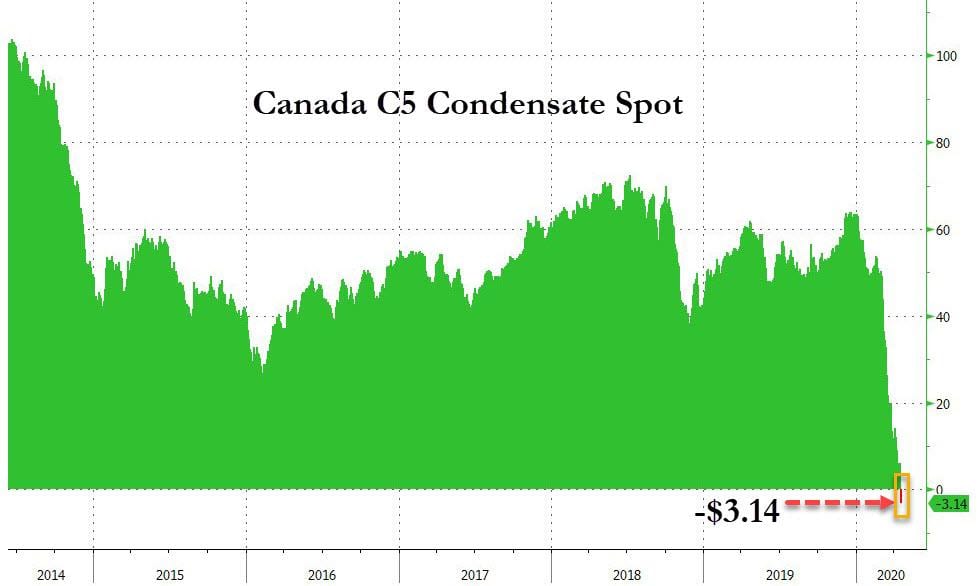 What caused Oil to hit 0? The massive sell off not only took out stop losses, but also scared off future traders who were holding for today’s futures expiration. The combination of a supply glut of oil and dwindling places to store the commodity caused this Oil-mageddon. A negative Oil contract means that any producers of crude must pay for buyers to take Oil off their hands due to a lack of storage capacity. The future contract hits negative, as many of these traders do not actually want physical delivery.

Now of course, this does not mean Oil is free. Yes, these Oil companies will pay you for taking physical delivery, but you need to remember that you still need to pay the transportation and shipping costs. Nothing in this world is ever free, although it seems we are heading to a world of free money.

Currently, the Oil futures are above negative. May contracts at time of writing are at $1.15. This is not something I would trade. There will be a lot of erratic and volatile movements that the risk is not worth it. There are even talks of the USO ETF having issues here due to the interest and volume in Oil. Personally, I am going to step back and observe. There are plenty of other markets I can trade.

After today, the next big futures expiration date is May 19th for the June futures. You can follow all the action of Oil futures here.

As a trader, I found this whole Oil episode quite shocking. Seeing Oil tumble to 0 is something I may never experience again. It is interesting to note that other Oil markets held reasonably well. I also trade Brent Crude (UKOIL), and that market did not move as low as many expected it would. The big surprises were the reactions in the bond and stock markets. People expected bonds would rally (and rates dropping) as people ran into safety. Did not happen. Perhaps that reaction was delayed, as markets are selling off today, and we are seeing the ten year yield drop.

Definitely the golden age to be an active trader/investor. I have posted what I am looking for on the equity charts on our trading Discord channel. Today’s crude expiration will have an impact on how these markets close today.