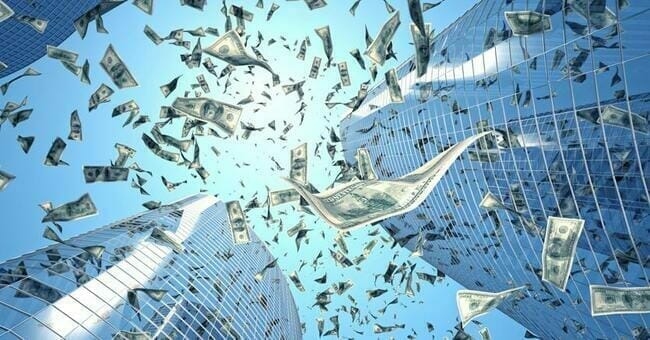 Some might be wondering, is this it for the precious metals? Gold has had a phenomenal run. It’s looking kinda expensive right now. And it’s taken a hit in recent sessions. Is it time to bail?

No one can say for sure how things will play out in these uncharted waters.

No one can say for sure that we’re still in the very early stages of an epic bull run in precious metals, but that would be my best guess… despite the “don’t fight the Fed” incantations emanating from every corner of the investment world.

The old high for the metal was roughly $1,900 back in 2011. But today’s monetary climate is completely different.

A little perspective helps at times like these: What is the approx. value of all the gold sitting on the surface of our planet right now? $9.5 Trillion?

With interest rates at zero and the dollar printing presses stacked waaay high (think stacks of Marshal’s and a packed arena full of metal heads), it would appear the Fed is out of moves.

Unlike the 2008-09 financial crisis, when the U.S. government had to decide whether to save big banks and help homeowners, the scope of the rescue effort is much wider now. Not only has the Fed started buying junk bonds for the first time, the government is lending to small businesses and sending money directly to tens of millions of Americans whose livelihoods have been devastated by the pandemic.

Downturns of this magnitude are so dramatic that they inevitably produce a “new world order” with a very uneven distribution of winners and losers, including in asset classes, Dalio said. He cited gold and certain stocks, especially those of companies with strong balance sheets, as some of the “beneficiaries.”

With all this new money sloshing around the system—trillions in just the last few weeks alone—I would argue that gold is as cheap as its ever been. This bull run is just getting started and the price trajectory we’ll witness over the next few years may shock even the most fervent bull. That’s my best guess.

The metal and Senior Producers tested multi-years highs a few days back—seven+ year highs if my arithmetic is correct.

Looking at the Senior stocks specifically, the snap-back from the March 16 (crash-day) lows was impressive, nearly doubling in price from that fateful session.

Obviously, waves of panic swept over the market on March 16.

Some blew out their positions with little regard for the underlying fundamentals, only to smack themselves silly when buyers rushed in to scoop up their hastily discarded shares.

The Junior’s are different story. Some of the ExplorerCos I follow are still pressing their lows, though there are signs of life.

It helps to keep in mind that during the early stages of a gold bull run, the Senior stocks attract most of the early money. Then, when the values at the lower end of the foodchain simply cannot be ignored any further, money rushes in, targeting quality first.

It’s in this high-risk / high-reward arena where the biggest gains are realized. We’ll see 10-baggers if I’m right and this bull run is for real (hopefully in one or more of he stocks we follow here at Guru Central). We’ll see 100-baggers too (I like to think we’ll tag at least one of those as well).

Metalla (MTA.V), a Guru client, is a good example of a high quality Junior catching a bid in recent sessions. It’s traded to a solid double since its Mar. 16 crash day low.

Alexco Resources (AXU.TO), another Junior we follow closely here at Guru Central, was good for a 150% post-crash gain a few sessions back.

Schiff and Fighting the Fed

Peter Schiff, in a recent podcast, expounded on the popular notion that one should NOT fight the Fed. Your dime-a-dozen market analyst types are trying to lure you back into the stock market with the argument, “why fight the Fed – the Fed is printing money so you wanna buy stocks?” Schiff’s take, and it’s brilliant: “The way to bet on the Fed is to buy gold – that’s the best way NOT to fight the Fed… if you don’t own gold, if you don’t own gold stocks, you’re fighting the Fed“.

This rampant debasement of the U.S. dollar is hugely destructive for the greenback, but enormously positive for gold.

Gold is the only currency (yes, the shiny malleable metal is a bonafide medium of exchange) that can’t be rammed through a printing press, or as Lukas Kane is oft heard to say…

If you believe in gold and you believe in the companies that poke holes in the Earth’s crust looking for the stuff, resist blowing out your entire position during the next positive news event. Take profits, for sure… enough to recoup your initial investment, but if the company is sound—if the underlying fundamentals suggest an endgame—let the rest ride (be right, sit tight).