GDX on the Verge of a Breakout? New Bull Trend for Gold Miners Ahead 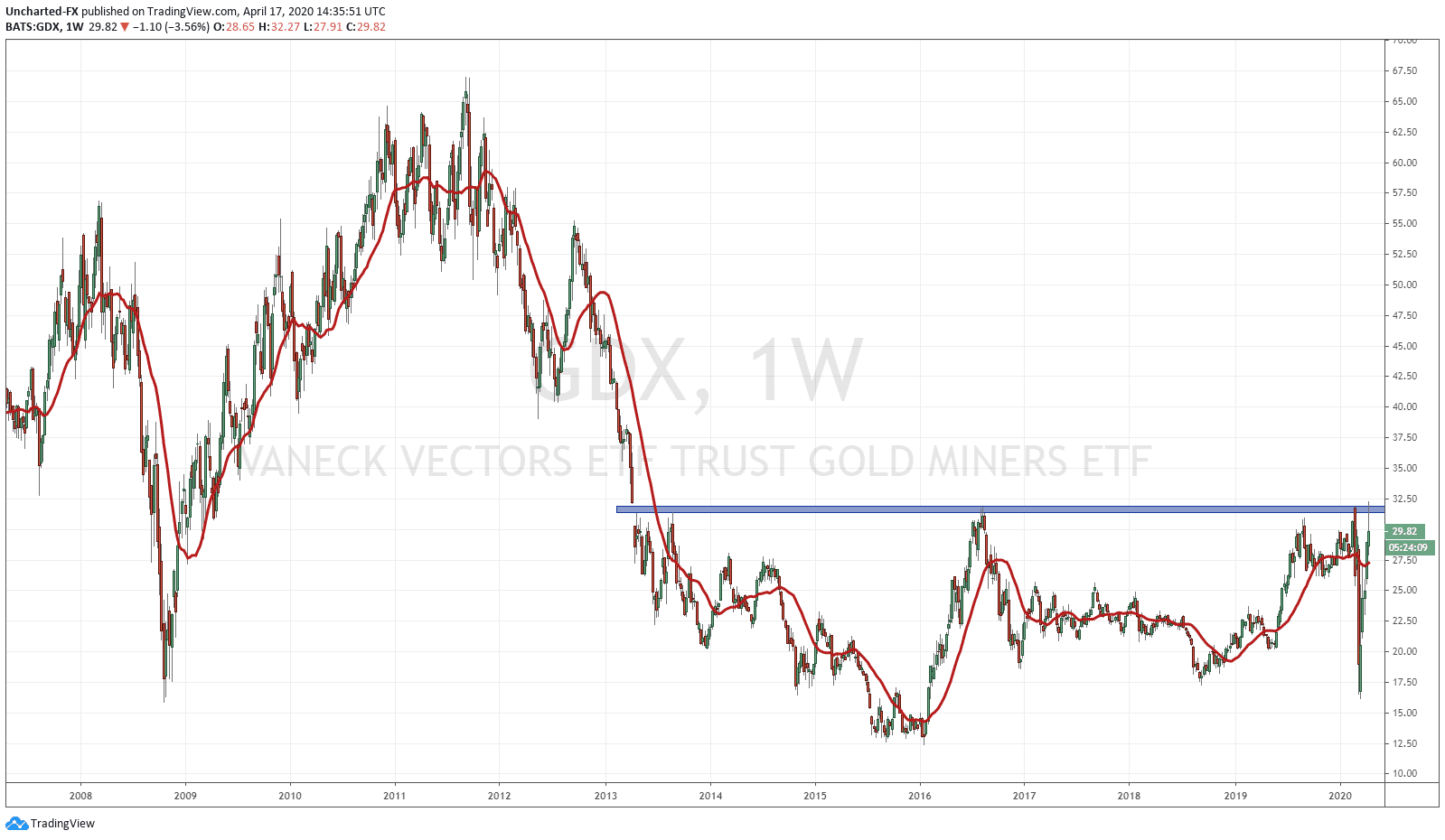 The GDX was a chart I posted on the discord chat for a possible breakout at the end of February. How things changed since then. On that week, the GDX did not confirm the break above our big resistance zone around the 31.75 zone. We sold off. And then we sold off hard due to the effects of covid-19 on world equity markets.

A lot of people are asking why safe havens like Gold and Gold stocks sold off. Everything sold off as people ran into the safety of cold hard cash. We did see something similar during the great financial crisis of 2008, but then look at how Gold and Silver performed afterwards… will history repeat itself? I believe Gold, Silver and the miners sold off hard because of the retail trader. It is generally the retail trader who is investing or speculating on these assets. There were a lot of margin calls that were on the cusp of being hit, or had to be paid. In this scenario, everything would have to be sold off. This is backed by a lot of the margin calls that did trigger, and a lot of people who follow the Gold markets see this as the most plausible explanation for the hard sell off.

As price drifted downwards, we bounced at a flip zone at 17.20 and are now back at the resistance zone. First of all, the bounce back to resistance is a good sign for an eventual break out. There were some sell offs, as indicated by the candle wicks, but nonetheless we made it back. Very strong and positive price action.

In terms of market structure, we are seeing a good case of the breakout. All markets move in only three ways: uptrend, range, downtrend. On this weekly chart we can see the downtrend with many lower highs and lower lows. From 2013 to present day, price just ranged, constrained between two zones (a price floor and a price ceiling). What is next? Sure we can range for a bit longer, but there are some fundamental reasons for the break. We should expect an eventual break and then a new uptrend with new higher lows and higher highs. For those in doubt on the technicals, take a look at the Gold weekly chart. Similar downtrend and then a range from 2013 until 2019. We had the breakout and have been in an uptrend since mid 2019.

So the fundamental reasons for miners here? Well let us look at profits and costs. Mining is a cost extensive business. Fuel costs play a major role in eating out profit margins. This is about to change. Most of us have been keeping an eye out on the oil prices, which is now currently below 20 a barrel. In the meantime, the price of Gold has gone up. This means earnings for Gold companies will be better than expected, and with Gold continuing higher, mines that had a higher all-in sustaining cost, will become profitable as well. This could see a revaluation of these companies between 2-5x.

Governments have implemented large fiscal policies (not to mention the division we will probably see come the elections), central banks have pretty much exhausted all their ammunition, and the fiat currencies of many nations are being inflated (devalued) to attempt to keep things propped. Bond yields on the short term are yielding less than 0.15% for 3 months or less. If you are a money manager that needs to park money (like we are seeing now), why park money in bonds when you can buy Gold and maybe even make a good percentage gain while doing it? This is what Ray Dalio is arguing. That it makes no sense to be in bonds yielding this low. You are trading bonds now betting that central banks will eventually have to cut into the negative, and your bonds yielding positive will be worth more. I have been bullish on Gold both due to technicals and the fundamentals since last year, and I am still bullish going forward. We are set for a mania in the miners and the junior miners.